I totally can't think of a clever post title...

Today I went back to the gym with Mike. I forgot to keep track of how many laps I did in my just over 15 minute session, but I walked the straights and jogged the curves of the track. I'm happy with how that went and how I felt afterward. The only issue is with my abdomen which, duh, except that the problem is the umbilical hernia that became an issue early this year rather than anything directly related to what happened in June. The good news is that I met with the surgeon yesterday and that's going to get fixed next Tuesday. Yay! That means I can be back in the dojo sometime in mid-September. In the meantime, I need to run with a brace on because my midsection is so unhappy I bowed out of a raid I was supposed to join tonight.

Over the last few weeks I've been feeling the urge to create. I guess it's some kind of coping mechanism but a healthy one unlike, say, copious amounts of alcohol. Aaaanyway, our community group came over Wednesday night for a goodbye party. Our leaders are moving to Amsterdam which is awesome and slightly enviable. Before they came, I spent way too long doing this: 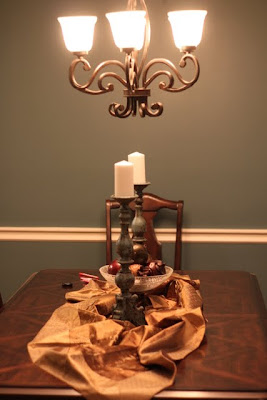 Do you know how long it took me to crumple that thing just right? I'm not telling because it's embarrassing. I tried to do it like Cheri did it before our halloween party, even looked at pictures, but no such luck. Also, I think our light fixture is crooked. I thought so sitting at the table but, looking at the photo, I really think so. Anyway, I have spent the last few weeks working on shadow boxes. I got the idea from a friend from church who lost a baby ten years ago. This is Garrett's: 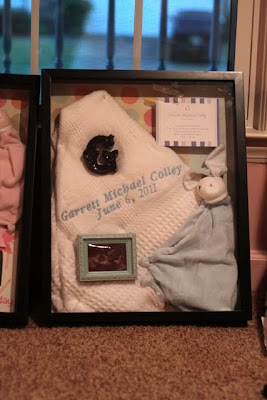 In it I put the blanket that Lindsay made to go over Garrett's casket, the birth announcement I made, a framed photo of one of his ultrasounds, and the bunny lovey that was supposed to be his. A duplicate, because he was buried with the original. When I was thinking about where to put the shadowbox, I had the bright idea to make one for Autumn, too. This way I can hang them together without it being too sad or strange and if we have any other children, I can make them boxes to match! 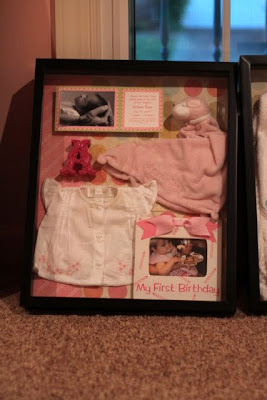 Autumn's is pretty similar, birth announcement (I didn't make that one, in case anyone is wondering), her bear lovey (don't worry, that's Two Baa so she has another Baa in case she needs him), her tiny coming home outfit, and a photo from her first birthday. Both boxes have scrapbooking paper in two prints as the background as well as initials I found at Hobby Lobby. Autumn picked them out. I think I am going to put the boxes in the hallway or in our bedroom.

This is kind of random but I painted something for Autumn's bathroom. She asked for polka dots and I liked the idea of having teal decorations in there since the walls are this sherbet orange. Target had a sale on some teal accessories and I thought I might bring in the polka dots through decorations. I couldn't find any reasonably priced art so I thought I'd try my hand at this. I had the white mat and frame already and I have a mountain of paint samples from last summer when we were painting all the rooms in the house. At first I just did the dots but it looked a little plain so I added her initial. I may not keep it but I thought it wasn't a bad first try! 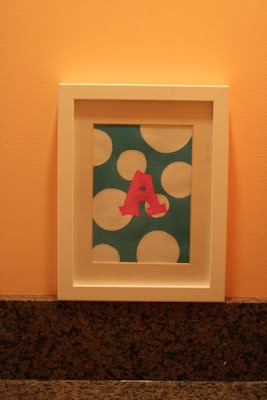 Last but not least is my current project, a dress for Autumn. I found the fabric I bought last year for her. We put our house on the market right after I ordered the fabric so I wasn't able to do anything with it. We couldn't make a mess since people were coming over for showings all the time. And then once we moved and all of our new home renovations were done, I was pregnant and sick all the time. Soooo, last week I broke out my patterns and asked her to pick out a dress. This is the one she wants: 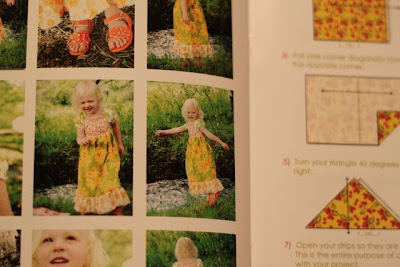 And I am using this fabric. 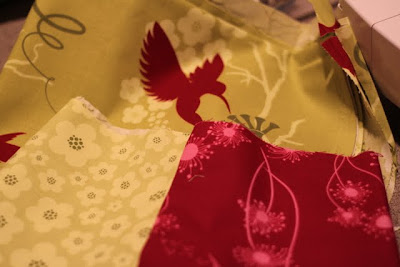 Pretty, isn't it? I'm hoping it goes okay. I haven't done a major sewing project in a year and this one has some techniques I haven't tried before. We'll see! Once the dress is done, I have a few more things in the pipe. I need to get our photo album for last year put together and ordered (I use MyPublisher) and I want to make some placemats out of this laminated cotton I ordered a few months ago!
Posted by Sharaze Colley at 8:39 PM