Looking Back to See Where I Am Going

Look at this picture I just found: 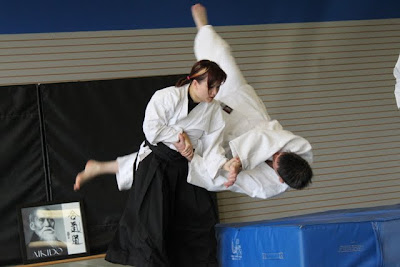 How fun is that? I am making the flyer for my preschool aikido class so I've been going through photos from the last year. The picture is from my 1st kyu test back in June. One of my fitness goals is to get into good enough shape to begin preparation for my black belt test. I'm guessing it'll take a while. I missed a lot of classes with my epic morning sickness and then, of course, the bulk of the weeks after losing Garrett so I am only about a third of the way to the amount of training days (I need 200, minimum) so it's not like I don't have the time. But it's still frustrating to be starting from ground zero instead of where I was before I got pregnant and everything crashed internally.

I had the hernia surgery 2 weeks ago tomorrow. The first three days were worse than I expected but I survived despite being allergic to my pain pills. I could only take them at night with a benadryl. By Monday, though, I was feeling quite well. And today I lifted Autumn into a shopping cart for the first time and there was no pain. Not even the pre-surgery pain. I have to rest another week and then I'm clear to do whatever my body can handle, the doctor said to just listen to it and I'll know if it's okay or not.

Anyway, a couple of guys are training for the rank I tested for last year so I'm piecing out my test video so they can see it. My expectation is that their testing videos will look much better than mine, partly because they are both very good, and partly because I've been the guinea pig for every test since I became senior student, hahaha. We now know not to let people below a certain rank uke (be the person attacking and being thrown) and that certain throws need to be practiced frequently well, well, well in advance of the test. This is one of those throws.


Anyone who's done hip throws can see all the mistakes I'm making, especially in the practice part. I'm not sure if it's the size difference, but boy did I struggle getting that one even remotely right! All I can remember from that month is aching all over from rolling those guys over my back and hips, haha. I look forward to feeling that way again!
Posted by Sharaze Colley at 9:24 PM