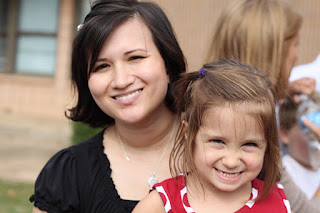 I got a haircut. A Team Effort haircut. Friday I went to my mom's salon and I didn't realize until I got there that she had scheduled me for right before she was heading out of town. I had a picture and the cut didn't look like it'd be that hard to do so I thought it wouldn't be a big deal. And the cut really didn't take that long but when she was done, it didn't look anything like the picture. I figured, whatever, it looked okay so I went home so she could be on her way.

I decided to practice styling it before heading to Alabama and THANK GOODNESS I did. >.> After washing and drying my hair, I realized that she had given me a shag...I looked like Kristen Stewart as Joan Jett (DON'T JUDGE I READ GO FUG YOURSELF THAT'S HOW I KNOW). Poofy on the top and super, super thin at the bottom. Even better? She had missed a HUGE CHUNK on the side. So after some panicked phone calls because by now my mom was in Missouri, I found out that SuperCuts was still open so I went in and said "just give me a bob." So now I have a bob. And I have gotten compliments on it. All's well that ends well but, jeez, if I had known I was going to get 4 inches cut off, I would have picked a cooler haircut.

ANYWAY. I have midway fitness pics!

But first, let me relate to you a conversation between me and Autumn:

Autumn, after poking my tummy: Mama, your tummy is squishy.
Me: I know, that's why we've been going to the gym a lot lately. I've been exercising.
Autumn, completely deadpan: It's not working. 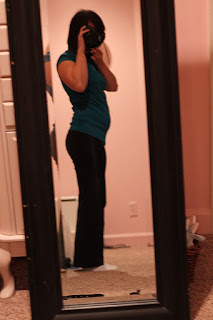 Again, excuse the mess. This mirror is in the pink room which is the staging area for other projects. Like sorting garage sale stuff.

I am not sure why my body fat percentage jumped up...maybe I'm retaining water? I dunno. BUT FOUR POUNDS!!! That's a lot for a short person like me! 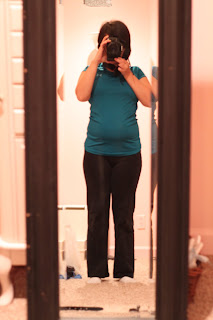 I had what I think was my 5th personal training session yesterday and it went great. I've improved across the board with the weight I can handle--I even did a few leg presses at 200 pounds! We are also doing a lot of work on my stabilizers, balance, and body alignment which is fun. I've been expanding my bosu ball routine, one cool thing I did was stand on the flat part of the bosu ball while Jonna and I threw a ball back and forth. She's also introduced me to more kettle bell motions and a couple of new, interesting machines. I will have to take pictures sometime.

It's been encouraging because she says I have good balance, focus, and body alignment, which means I'm not starting from nothing. And my body is remembering what it is supposed to do without much protest. Everything has been so safe and gentle that despite me hurting all over, I haven't had many problems with any of the incisions. So, yay!
Posted by Sharaze Colley at 7:43 PM