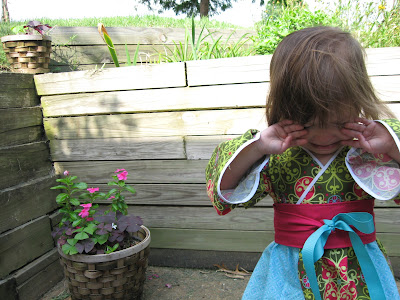 Today is supposed to be a fitness post but there's not much to report on that front. I am still 118 pounds although my fat scale tells me I am down to 24% so I guess that's good. The training sessions are going really well but not really blog-able at the moment.

I thought today might be a good day to talk about Autumn and what's been going on with her in the context of losing her little brother because four months ago today, I went to the hospital and tomorrow Garrett would have been four months old.

One of the somewhat unexpected consequences of all this upheaval is that Autumn has suffered some serious, serious separation anxiety. On the day I went to the hospital, I called Penny to ask her to stay with Autumn, told Autumn I'd see her later, and then Autumn didn't see me for 4 or 5 days. When she did, we had to tell her what happened to Garrett and she was completely freaked out by what she still calls The Crazy Bed there at the hospital. It's understandable that she would be struggling to process everything.

After things got kind of normal-ish, whenever we dropped her off at school, the gym, or Sunday school, she went into total meltdown mode. A lot of people chalked it up to a phase but I really didn't think that was it because, well, I just know Autumn and I knew this wasn't "normal" for her. So I did some research into separation anxiety after a parent's illness or a sibling's death and got some ideas.

First, we tried talking to her, reassuring Autumn that we would not leave her and she would see us again. We already did this but we also made extra effort to be super chill about dropping her off anywhere so that she wasn't feeding off of our emotions. That didn't help. Then, we tried a security item. I let her choose one of my necklaces to wear at school so that when she touched it, she would be reminded that we would come back. Autumn chose this one, which someone anonymously sent to me a couple of weeks after I got home from the hospital. 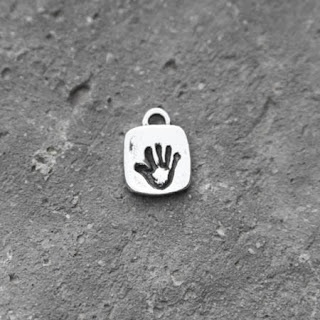 It worked for a little while. She called it her brave girl necklace and never wanted to leave home without it, which I thought was sweet. However, the necklace stopped doing its thing for her sometime after I had hernia surgery and she ended up being mostly at Lainey and P'd's house again because I was having a little more trouble than expected with the recovery.

After a couple of weeks of frustration, and one particularly heartbreaking drop off where I could hear her wailing as I walked to the car in the parking lot, I hit on the best idea ever. She asked for some things this one week, I was trying to think of ways for her to kind of earn them and suddenly, it hit me! I made her a sticker chart. There are four rows with five spaces in each row. At the end of each row is a star. Every time she goes to the gym, school, or church without crying at the door, she can put a sticker in a spot. Originally, it was just going to be school, but she bargained in the other two places. :) Smart kid, huh? 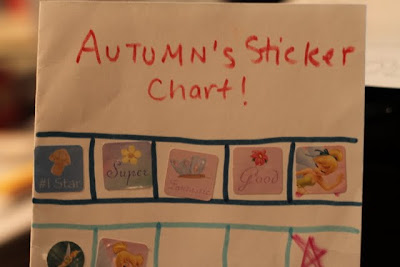 Last Thursday she got her fifth sticker so she got to choose something out of the treasure bucket! The bucket is one that her friend Josh gave her for her birthday. I drew a sign for it and put in four items since there are four rows on the chart. 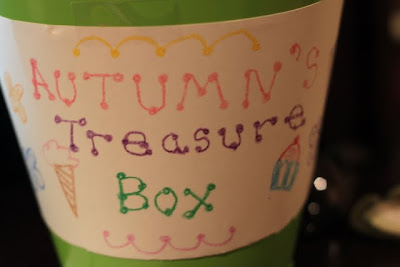 I didn't want to just put in "stuff" so in addition to the doll she chose last Thursday and the remaining Tinker Bell doll, I put in a ticket to make cupcakes because Autumn read Pinkalicious and has been asking to make pink cupcakes together. I also made a TCBY ticket. She and I rarely go out for ice cream together so I thought it'd be something fun and different for the two of us. 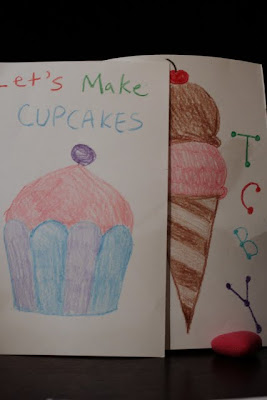 I am an amazing artiste. I have missed my calling, right? Bahaha. Right.

This has worked like a dream. I told my counselor about what's been going on with Autumn and she thought both the necklace and behavior charts were brilliant ideas which really helped ease some of my concerns that I had created a monster, haha. Or that I was solving problems with material goods. But, I've built in a way to ease her off the chart. Once this sheet is filled, she has to fill two rows to get into the treasure box on the next sheet. And then after that, if it hasn't naturally fallen by the wayside, we might do a whole sheet to get something extra special. She's happy.

And I am happy. Also, I need to think of some nice gifts for Autumn's teachers because they have been amazingly patient and kind through all of this trial and error. I am ridiculously thankful to them all. If you're a teacher and have any suggestions, I'd love to hear them.
Posted by Sharaze Colley at 7:27 PM