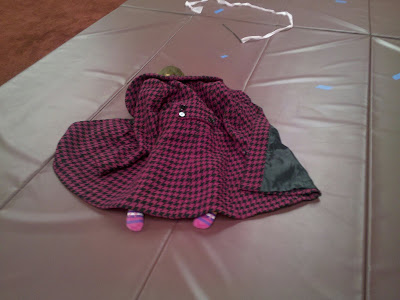 Autumn is not actually sick, it's just that whenever I do a post on not feeling well, I think of this photo. That's at last year's preschool aikido party and she felt so down that she didn't even want cookies! I called P'd to come get her, poor thing. I thought her little feet sticking out were so cute and sad.

ANYWAY, the reason for that flashback is that my fitness week has been sidelined by a sinus infection. I'm really annoyed but it happens. I was supposed to work out at Mike's class on Monday and was pretty much couch-bound all day. Then today I had a meeting with the trainer I was going to try to make but woke up with a cough like a seal's bark so, yeah, I'm taking it easy so I'm in okay shape to teach the kids tomorrow.

On a happy note, I weighed in this week at 113 pounds!! I don't have a solid goal except to fit into my old pants but if I go by what I weighed before I got pregnant, I'm only 8 pounds away from that. Another happy, I fit into my largest pair of pre-pregnancy pants. It's a pair of jeans someone bought me that I hung on to for pre/post pregnancy use because they were a little too big to wear but were really nice, but still! I couldn't even get them over my hips back in September. The pants I did have to buy so I wouldn't have to wear maternity stuff are starting to get baggy. So good news all around! Other than the sinus/coughing stuff, anyway.
Posted by Sharaze Colley at 9:26 AM