On Returning to Etsy

For a couple of years, I had an Etsy shop called Sew and Scribble. I had to close it while I was in recovery and although I've thought about reopening it, I've been dragging my feet. My friend Christy drew art, I edited it and then we put it on things like labels and notecards. Because most of our items sold to people buying for children, I just...I just don't want to be immersed in that kind of work right now. I have some ridiculously cute stuff so eventually I'll offer some of it but right now, I'm starting a little differently.

When I was first out of the hospital, I went on this huge creating binge. I made shadow boxes, clothes, notecards, all kinds of stuff. I didn't particularly want to make Garrett's birth announcement, though. However, when I looked online for something I liked, there simply wasn't much out there in my price range. Photo-less announcements seemed to only come from fancy stationery shops. And I didn't want to do a photo because his photos are painfully sad and, quite frankly, I found many of the announcements with photos of stillborn babies...difficult to look at. I couldn't imagine sending something like that.

Plus I was just sick of looking up that kind of thing. So, I made my own and sent it to a few close friends and family members who knew what happened. You already know about the Christmas card.

After thinking about it for a while, I decided to list the announcement on my Etsy shop, reopened as Colley Designs. I've got a little website set up which will eventually link up to the Etsy shop. Right now I've only listed the boy announcement. 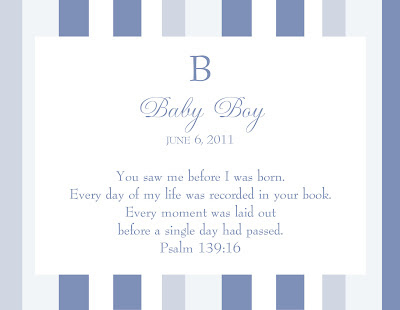 I made a version for a girl. 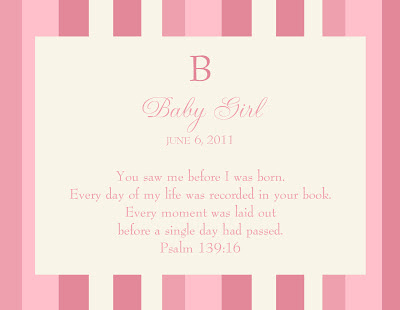 And I'll probably do a green neutral one, too. I'll list the pink one tomorrow and then work on the green one. It takes a bit to make a listing on Etsy and, quite frankly, it was a draining experience. Much more so than I expected. Just thinking about someone else sitting down at 1 am, unable to sleep, searching for a way to acknowledge this little life. It breaks my heart.

I have a few other things to list.  I made some notecards for kids. Why this particular one doesn't bother me, I don't know, maybe it doesn't have the happy pictures? I also have some notecards for adults. I might even list some canvas word art I've started dabbling in.

I like the idea of helping people out whether they are grieving or celebrating. I also like that creativity is one of the things that came out of my loss. This is also an opportunity to help out our family. It's only a little bit, but I plan to put all the money I make from my new Etsy listings towards our adoption fees. I'll talk more about that later since this post is getting a little long but, over the next couple of weeks, keep an eye on my shop. There's a widget to the left of the blog and I'll probably mention it from time to time. I'd love to make something for you.
Posted by Sharaze Colley at 8:20 PM