the thing with feathers 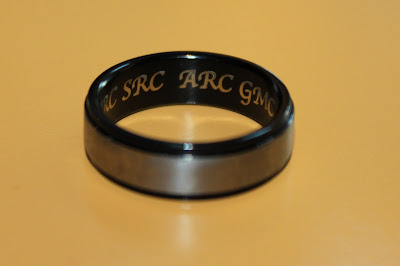 I had a completely different post (complete with links!) planned for today but while I was working out at the gym, I realized that today was kind of a big day for several reasons.

The smallest reason is a mini fitness update. I take this class with Mike, partly because it's a good class and partly because he feels better when he can see me work out. And it's time together--time I wiiiiish he'd spend in aikido but since that involves social interaction, that's so not going to happen, haha. Anyway, the class normally uses 3 sets of weights: light, medium and heavy. Today I officially dropped the 8's, my lightest, and did the whole class using 10 and 12 pound weights. Eventually I'd like to make the 12's my medium weights and add 15's to the mix but, really, I could stay here for a long time and be pretty pleased with myself!

Additionally, today we submitted our formal application to Bethany, the agency we are using for our adoption. It took us a couple of weeks to fill it out because, for one, there was a ton of information to gather. References, their addresses, the HIPAA forms, our tax returns, the mortgage balance on the house, how much we have in retirement...and so on. We had to articulate why we want to adopt, what genders and races we are open to adopting and what kind of neighborhood and home we live in. I'll probably share some of that with you in a later post because it was an interesting process.

Much like the day we submitted the preliminary application, submitting the formal application falls on a milestone related to Garrett. Eight months ago today:

Garrett was stillborn 15 hours after we arrived at the hospital. Perfect and just as fuzzy as Autumn was.

I was still touch and go in ICU. They were no longer afraid I was going to die but they were afraid I might lose kidney or liver function and about this time I was just waking up from an emergency surgery where they couldn't tell me if I'd wake up with a uterus or not (I have all my parts and, oddly, the surgery made Autumn's c-section scar less problematic).

The blood transfusions we still going on.

We hadn't told Autumn what happened yet.

The high risk specialist began prepping me to hear that I most likely wouldn't be able to have another baby.

And so much more. It's rather amazing how much has happened since then. Most of us who were together through it all agree that it feels like 1000 years ago and yesterday all at the same time.

I miss Garrett all the time. We all do. But, while we haven't moved on, we are moving forward. Not leaving him behind, but taking him and what we learned through him with us.

Today, Autumn told me she was going to pray for her baby Garrett in Heaven and for her new baby who was coming. And that the 'doption was taking forever. Me, too, little ma'am.

I've heard it in the chillest land—
And on the strangest Sea—
Yet, never, in Extremity,
It asked a crumb—of Me.

(The photo is of a memorial ring I got Mike last summer. It has all of our initials--and room for more.)
Posted by Sharaze Colley at 8:39 PM