With the end of the home study drawing nigh, I realized I need to get started on our adoption profile book. The social worker has asked that the first draft be completed before she comes to the home visit so she can proof it and make suggestions.


I was on the lookout for an inkjet printer so I could do some printing on fabric (which is not something a laser printer like I use for my Etsy store can do) and Mike found a printer/scanner in his parents' garage sale. At first I felt meh about getting something so big and we didn't really *need* a scanner but it was free and I need the inkjetyness (new word alert). However, it's a just in time blessing because I have very few of our wedding photos on my computer and, for whatever reason, I feel like starting with our wedding although that won't be the beginning of the profile. We are, if you can believe it, almost to our 10th year of marriage! Our photographer was just edging into digital photography and shot half traditionally and half digitally and this was before photographers were giving out cd's, haha. He was pretty cutting edge and a fantastic photographer. I hate that he's not in Memphis anymore but I'm glad he was around to do our photos. I mean, look at this bridal portrait: 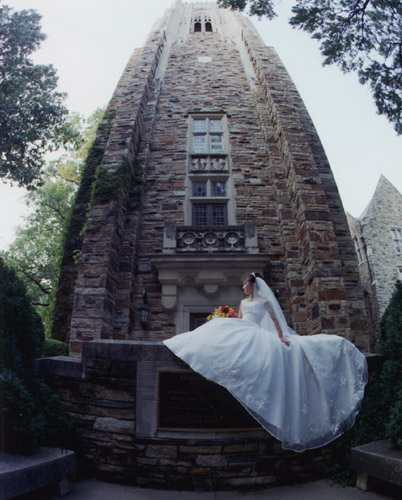 I still have people telling me how much they loved our wedding which is so cool because I really wanted our wedding to be a party, a celebration, with bright colors, happy music, and people laughing. I have to give a lot of credit to Mike's mom for how wonderful everything was because she's an amazing planner! I didn't have much of an idea of what I was doing but between her and the seriously talented people involved, we did have a wedding to remember. Wes, who officiated and was funny and warm during the service, did the best premarital counseling ever. I think he's a big chunk of the reason Mike and I have had such a solid marriage.

As far as attendants, we only had family and a few close friends. I asked my sister and Mike's sisters to be bridesmaids but didn't want my friends to have to shoulder the cost burden of being a bridesmaid--we were all really tight and starting out at that time. But, I still had my closest friends (Cathy, Christine, and Christy...all names you've seen here!) come to the bridesmaid luncheon and all the fun things they could participate in. Sometime I'll tell you about the bachelorette party and the bridal portrait sessions! By the way, my sister has requested that her photo not be on the internet or uploaded to any online sites so I've covered her face. I'm not sure what I'll do in the adoption book but I'll figure something out.

Mike had his dad as best man and his brothers and my brother as groomsmen. Some good friends (Jason, Frank, and Eric who is Cathy's husband) were ushers and were kind enough to stand on the stage with us because we had an uneven number of ladies and gentlemen. I loved it. I love men in tuxedoes and I enjoyed the look of the couples on stage rather than all the color on one side. Here's Mike's family. We all look so young in these pictures, don't we?

See? I wish this was in color.

I don't really have many photos from the reception. I only scanned what I wanted to use in the book, but I do have this picture and I love it! It's Mike's Uncle Paul. Doesn't this look like something from a Godfather movie or something Rat Pack-y? 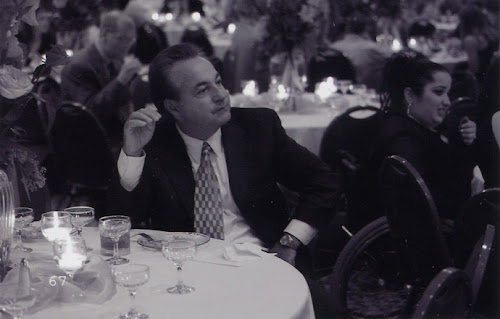 I know everyone thought I was crazy but I had this photo framed. But even the doubters agree is looks so darn cool in Mike's office. There's a photo from Ryan and Leah's wedding that I regret not getting. I wanted it to hang with this one. It's Boppa dancing with a huge football player. He's doing the electric slide or something (we only played motown and swing at ours so no electric slide pics, lol...I do have one of him dancing at our wedding that I *totally* need to post, though. It's hilarious) and the people are surrounding them and slightly blurred. Such a fun, quirky photo that would look great next to Uncle Paul! 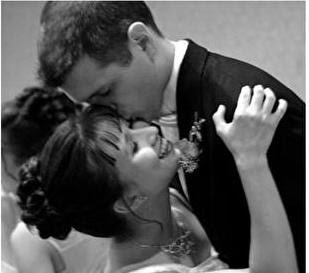 I guess that's all for now! That was fun. I definitely feel more inspired to do our profile book. :)
Posted by Sharaze Colley at 9:18 PM