There are worse problems to have BUT STILL 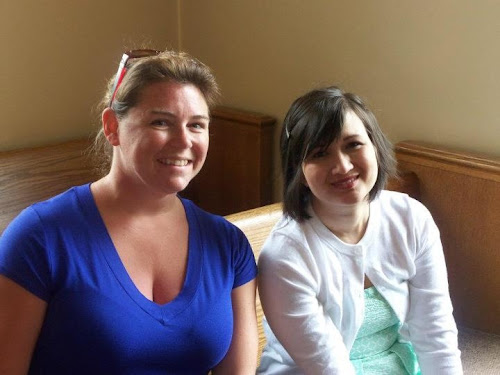 I know I've been terrible at blogging this week. I think there was some poor planning on my part with going to the beach for Easter and then, this past weekend, an AWA aikido seminar in atlanta. The seminar was...kinda terrifying. And great. :) I am hoping a couple photos will show up sometime so I'll go into more later when I have some "illustrations." I'm exhausted and out of gas but I do have a quick funny story.

The above photo is from Sunday in Greenville, at my friend christine's orthodox Easter service. I enjoyed attending. She and her family converted to orthodoxy a couple of years ago and I'm really glad christy (who came with me to Atlanta and is in the photo with me) and I got to celebrate with her. I don't know if you can tell, but I can totally tell I'm not feeling great in that photo. I hurt ridiculously after the seminar! Sore quads, skinned toes, ankle blisters, the WORKS, haha.

But what's really funny: Not long after this photo...where I am, by the way, sitting so height didn't play much of a role, one of the priests called for the children to gather for a photo. He came over, introduced himself to us, and I shook his hand and introduced myself. He very gently said that I should not be afraid to join the children (12 and under!) for their photo.

Christy, Christine and I all had a moment of shocked silence because, well, I look more like a college student than a prepubescent and because, for all that I'm a little under five feet, I'm quite a bit more articulate and well dressed than the typical preteen! And I am Asian! We are a small people!

After thinking about how to put it politely, I, equally gently, explained that I am about 25 years too old for the children's photo (I'm 31) and, in fact, have children myself!

The poor priest apologized profusely, more than once over the half hour we were there after the service! In his defense, Easter week is huge and he was extremely sleep deprived but still! I told him it would be okay if he didn't mind me making a funny story about it. He said it would be fine. :D and so here we are.

Incidentally, after Christine explained who I am ( and he is one of the many who has prayed for me) and why I was in the area, he said he was glad I didn't take him down. Of course, he was just being silly but I did tell him my general policy is to not attack strangers because you never know what they can do! Also, because he already knows my story, I think he understands what I mean when I say I wear my age proudly because the years are hard earned.

What a Sunday!
Posted by Sharaze Colley at 8:42 PM