In Which a Small Adult Gets Kid Vibram FiveFingers

I haven't done a fitness post in a while and this isn't exactly "fitness" but I got a pair of these: 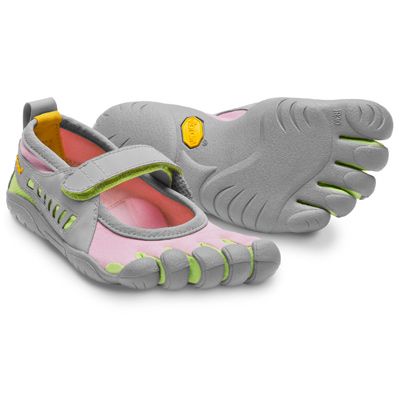 For some people this is like I've stepped over to the dark side! Like many things, Vibram FiveFingers seem to create a pretty wide division between lovers and haters although I am pleased to say that I might be converting a few of the haters! I didn't really expect to become a total fan girl but I think I am! I decided to write about it here partly because I'm excited about the shoes and partly because there aren't many reviews by adults who have had to wear the kid sized VFF's. I didn't get anything for this (although...seriously, I will take your free stuff...).

Although I've wanted a pair since I heard of the shoes not long after they came out, Vibram didn't carry my size for a very long time. I have small feet which makes sense since I am, well, small. I wear about a 4.5 to a 5. Usually a 5 to 5.5 in sports shoes. I checked the site occasionally over the years to see if they had something in my size, but the shoe finder would always come up empty.

When I discovered that the pain in my big toe was the beginning stages of a bunion, I did a ton of research and talking to people I trust and decided I wanted to get a pair of minimalist shoes. It didn't even have to be VFF's although the people who love them really love them. Fortunately, this time around, Vibram had the equivalent of a 5 in my size so I went to Outdoors Inc and tried on the Bikila LS in a 36. They fit well enough that I took them home...only to discover that when I curled my toes, they slipped out. I was soooo sad because these were adorable. But, VFF's are supposed to fit like a glove so it makes sense that I'd need a smaller size. 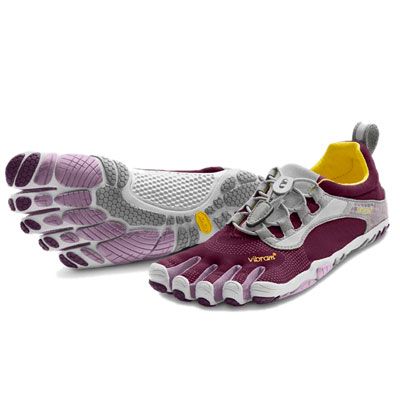 During all this research and trying on of shoes, I found out that Vibram started carrying a kid sized sport shoes this Spring. Before, they had a couple of kinds of casual kid shoes but I really wanted something to work out in, not to tool around in. No one in town carries the smaller sized Vibrams so I bit the bullet and ordered a size 34 (also, sales are good...there seems to be a lot of VFF sales). They fit really well, not exactly as tightly as some people have claimed in reviews but I may not have trouble getting my toes in because I have logged lots of barefoot time already in martial arts. And unless these stretch a lot, I don't think I could go down a size because two of my toes touch the top of the shoe. But, I wanted to really try them out to make sure that these kid shoes can withstand adult use. 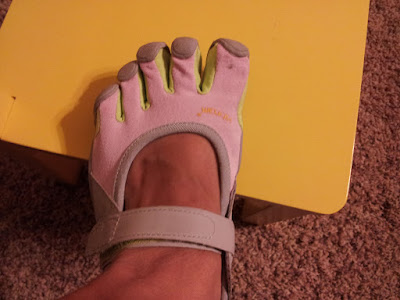 I seriously love these shoes now that I have worn them in a variety of situations. On days when I'm in work out clothes all day, I wear them running errands. I put them through the gym gamut, doing machines, bosu ball work, and kettlebell routines. They have done well in TBS, one of the weight/cardio classes I go to at the local gym. The only thing that felt odd was the lateral step drill because the seams in the toes felt weird and rubbed wrong but I may just need to get used to that. And, besides, as Chuck the Acupuncturist says, lateral motion isn't a natural motion anyway.

The company recommends building up to using VFF's over time. That's probably true for most people but I didn't have much trouble transitioning since I do so much barefoot anyway. I did have a little bit of top of foot pain at the beginning but I have had that with regular shoes anyway. Someone stomped on my left foot a long time ago and it bruised really badly. I kind of wonder now if it had been fractured or something but who knows. I also get a little bit of ball of foot pain on that same foot from time to time and it will be interesting to see if that goes away eventually.

I've noticed that the foot with the baby bunion doesn't hurt any more. I don't know if it has to do with the shoes or something else I'm doing, but the shoes are the biggest change I have made so that's where the credit is going!

One thing I wondered about was general acceptance. Friends seem pretty evenly split between "I can't look at your feet" and "your shoes are so cute!" Mike hates them but it seems to lessen as it becomes apparent that I'm not going to morph into anything weird, haha. Strangers don't seem to care while I'm out and about but I also tend to go from place to place like I'm way focused on where I'm heading so I might have missed awkward stares. I wouldn't have even thought about it if I lived somewhere like Colorado where everyone wears them. But Memphis? I know 4 people who wear VFF's. Three are kali practitioners (one of the arts I trained regularly before I got sick) and one is a teacher at Autumn's school. Oh, and I saw some guy wearing them at church. So Memphis isn't exactly a barefoot shoes haven!


As far as the future, I can't see myself moving away from minimalist workout shoes unless my feet start really protesting or I get the dreaded Vibram Stink. But, I throw them in the washing machine and air dry them once a week (cool, huh?) so maybe that will stave it off. I'm also a little concerned about winter wear. I'll definitely have to get some socks which will be really ugly but I get cold easily. But maybe it won't be so bad. It was like 107 degrees according to some sign I saw today and I walked on a lot of hot asphalt with no trouble. And that's kind of amazing since these soles are so thin and flexible that I can feel when I step on a piece of gum or get a bit of twig in a groove! So maybe it will insulate as well against cold? WE SHALL SEE.
Posted by Sharaze Colley at 9:11 PM