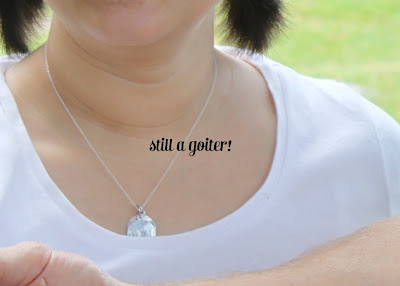 I just realized that I never did a real update on my thyroid tests. I went back to the endocrine clinic for a follow up today. After the ultrasound in the spring, it turned out that my thyroid is only swollen. There aren't any masses or actual nodes although it's pretty gross to think that my thyroid is so swollen they thought I had a multinodal goiter. All the thyroid level tests came out fine, too, which is why they told me to come back in three months.

Which brings us to today. I still have some of the symptoms of thyroid disease or *something.* Like fatigue, inability to lose this last chunk of weight...stuff like that. So they took another blood sample and he's going to run some chemistry tests, whatever that means, as well as check for vitamin d deficiency (I do take vitamin d supplements) and pre-diabetes because I have such an strong family history of diabetes. I'm supposed to hear from the nurse by the end of the week to schedule a barium swallow test which sounds SO DELIGHTFUL but it'll tell them how much my thyroid is pressing on my esophagus.

This particular doctor specializes in diabetes so he gave me some information on diet. He's pretty certain I have a high genetic probability of developing diabetes which doesn't shock me. Literally ALL of my dad's aunts and uncles (all 14, for real, you guys) had diabetes and my dad was pre-diabetic when he died. But I will be a little surprised if I do find out I'm at that stage because I'm doing all the things that diet list suggests, like cutting out most white bread and pasta. I do need to add another workout day--he said if I'm already very active it means I need to go above and beyond my activity levels and did sympathize with me that it's pretty annoying. But I already knew that and had already planned out a new workout schedule for when Autumn starts school.

We shall see. I should get the lab results soon. If those and the barium swallow are clean, I go back in six months for another check in to see how the swelling is doing. Fun times!
Posted by Sharaze Colley at 11:35 AM