What is up with these last few days?? It's been a nice, peaceful morning. I skipped church this morning, which probably isn't the best way to begin a post on Sunday morning but there you go! Mike was going to be serving in the nursery and my job in the kids' ministry is on break this month so I told him I thought I wanted to stay home and have some alone time before the craziness of the week starts. So, Mike and Autumn went together, blowing kisses at me as I saw them off. So sweet.

But it's been good. I had tea and crackers for breakfast, had a quiet time, read a little bit of a book, and didn't really feel guilty about any of it! Because it's been such an emotionally difficult week/ten days, I really spent some time praying about all of it.

I prayed for the counselor we had an altercation with and tried not to do it in a self-righteous way. I told God that I felt bad for losing my cool. That I was worried about other people she might do this to. That I don't know why I'm so lingeringly upset about the situation and I haven't the slightest idea why I can't trust that He's in control when He shows me all. the. time. that no matter how crappy life is, He's got this. I still don't feel better but I feel like I'm going in the right direction.

To tell the story, the counseling session just started out wrong. It was our second visit and, apparently, she didn't review our chart before coming and didn't remember basic things like Garrett's death, that Autumn's separation anxiety is because of my hospital stay, or that we were there for Autumn's social anxiety and, potentially, grief processing. She had us tell her why we were there "because...you told us to?" She had wanted a couple sessions as a family and a couple with Autumn alone which made sense to me. I let her know that Autumn had started occupational therapy for her sensory processing disorder and gave her the papers that we and Autumn's teachers had filled out. The counselor read over them and kept saying, "she's totally normal! No ADHD! All normal kid stuff!" Her manner was hyper and she didn't seem to be able to really focus on what we were saying.

But, here's where it went weird. Weirder. Rather than having a dialogue and getting a baseline of what our home life is like, she pulled out a stack of papers stapled together, handed one to me and one to Mike and spent the next hour reading it to us. She told us that we could take or leave whatever we wanted and we might be doing the things on the list. But when we would tell her we were doing it all (we have a routine, a bed time, a chore chart, transition time, a reward system, we respect each other, we don't spank), she'd get agitated and argue with us and tell us why what we did wasn't good enough (you shouldn't let Autumn pick her fuzzy for the fuzzy jar, you should hand it to her--really??). And a lot of what we went over were things she and I had already discussed in the first session. 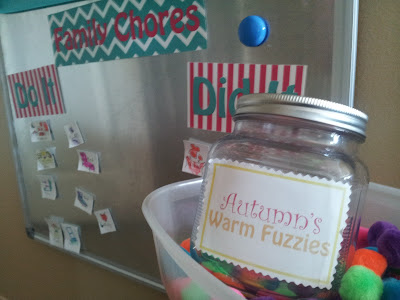 I have to confess that I let myself get frustrated. Mike and I were both baffled by the entire session because we've had counseling before and it's never been something where the counselor reads us a sheet verbatim and doesn't actually ask us anything or dialogue with us or even have a meaningful discussion of why we felt like we needed her help. Maybe she's just used to parents who are completely incompetent and that's why their kids are having troubles? But all she had to do was ask us some questions!

By the end of the session of reading to us, I asked her what, exactly, is the course of therapy going to be. Because she looked over Autumn's papers from teachers, doctors, and us and kept saying Autumn's normal. She was glad Autumn is getting OT for her sensory issues. She read us a parenting 101 sheet and pretty much said, that with small exceptions, we're doing it all. So what will the next family session look like? I've asked my counselor that before when we didn't have anything to talk about and it's never been a problem.

This counselor became belligerent and berated me for wanting quick fixes. Which I don't. And I told her that. Heaven knows, after all we've been through we know there aren't quick fixes. And Mike backed me up on that. I knew I sounded frustrated so I took a deep breath, apologized to her and told her I was not trying to be mean or insulting, it's just that I don't understand what the process is and would like to know. Rather than calming down, she got more angry and told me that she was insulted because all I got out of the session was the thing about the fuzzies. I still don't understand why was she so angry--she even told us we didn't have to do everything exactly like the sheet! She hit her papers and raised her voice at us, telling us that 75% of parents say they do these things but don't and one tiny change could make the difference! And this after I told her (again--because we talked about that in the first session she had forgotten or didn't note it) about how part of the reason we were there is that Autumn is so empathetic that she feels everything everyone feels around her!

Even Mike was freaked out so he said, "look, you say Autumn appears normal. She's getting occupational therapy for her sensory stuff. It sounds like Sharaze and I are doing well with our home life so if the OT doesn't solve her issues, then we can find therapy again." The counselor was talking in this very high pitched, agitated voice, pursing her lips, and saying things like FINE. It was the last straw for me so I told her that IF we get more counseling for Autumn, it will not be at that location because I need a counselor who is not so easily offended. She said something I can't remember and started writing furiously so Mike stood up and said, "okay, that's enough for today."

Mike had a great point: surely she deals with people more difficult than Mike and I on a daily basis. So what the heck happened?? A friend who is a therapist at a local rehab center thinks that the counselor probably had a bad day and possibly was upset because we had called her on her not-counseling and that he wonders how many people she's been milking money out of over the years. And that it's good we didn't go along with it all. But I still feel all funky and I don't know why it bothers me so much. I think it might be my sense of JUSTICE and my indignation because all I wanted was to help Autumn cope a little better with everyday life and this counselor, who is with a highly recommended group, was a huge failure. I'm also really disappointed in myself for not keeping my cool with her because I had been doing so well and not letting my anger get the best of me. The whole thing's just bizarre.
Posted by Sharaze Colley at 9:11 AM