12 Hours of Aikido and Still Upright!

This weekend I went to an aikido seminar here in town. It was seriously intense! I had a great time and it was pretty emotional being there. Last year, I could only sit and watch this same seminar. All together, I survived 12 hours of aikido in three days!! Andrew Sato Sensei led the seminar. He is an excellent teacher. He also happens to be the head of the AWA and has been doing Aikido since the year Mike was born. Thirty-five years. I can't even tell you how many ways he helped me with various techniques. Here is Sato Sensei helping me with tachidori, or bokken taking. 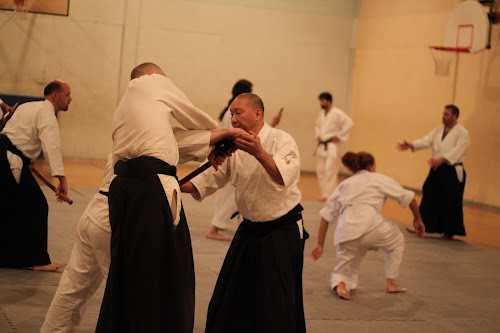 I also think that's a funny picture because you can barely see me behind Aaron there. I learned a few weaknesses I have to work on, which is really good, although it might sound bad. Sato Sensei extremely generously asked me what I wanted to work on and I asked for weapons. We started weaponry way later than this association does. I have a lot of experience with weapons, especially knives and various sticks and some experience with a jo, but I am completely unfamiliar with the bokken. And what knowledge I have of fighting with a weapon is not in an aikido context. Anyway, Sato Sensei's instruction worked. :) Enjoy this photo of my bottom half, hahaha. 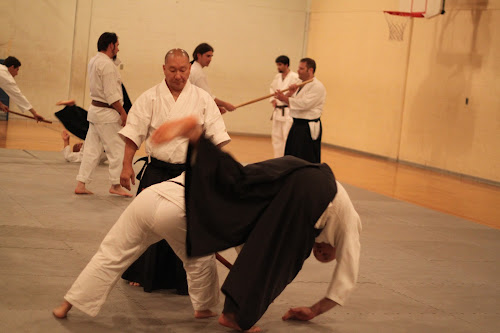 The biggest physical issue was my lowest incision. The hernia repair was not a big deal at all. I kind of wonder if my belt helps with that part. The bigger throws seemed to, I don't even know how to describe it, make it feel like my insides were going to fall out? Not that extreme. But it was a lot of sharp, deep pain and it scared me a little because I have a high pain threshold. I made sure everyone knew that I wasn't taking big falls and every person respected my boundaries. Sato Sensei tried a number of ways to help me fall painlessly, but I told him I thought it was just going to be a time and strength issue because of how much and how far the doctors opened me up. I appreciated his concern, though. I did discover that if I rolled up smaller and held my knees in with a free hand, it didn't hurt. It's awkward but kind of amazing how much it helped. Hopefully some more exercise will clear that issue up but for now I know how to compensate. Even though I feel like a roly poly when I do it! 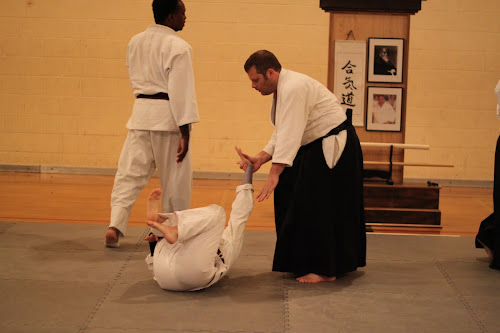 This, by the way, is Bob. Bob is absolutely fascinating and I told him he needed to write an autobiography! He started taking Aikido in his early 60's and, despite arthritis, is now a blue belt. I enjoyed working with him. Between the two of us, there aren't many excuses people who want to try a martial art can make! 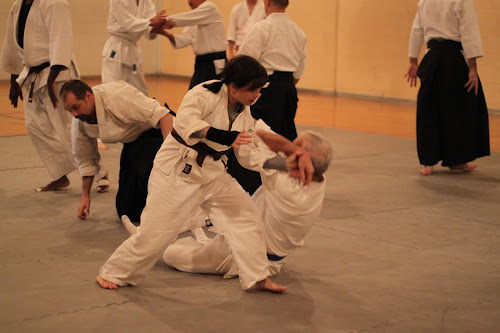 Another person who helped me out a lot was Jones Sensei. He's on the technical committee for testing and is a dojo cho in Arkansas. He is a very large man! And a good teacher. I liked this photo because you can see how much I stretch out and project to get some of these big guys going. I muscle things a bit too much and it's one of the things I'm going to work to improve. I want to get better at feeling the energy people are putting into their attacks. 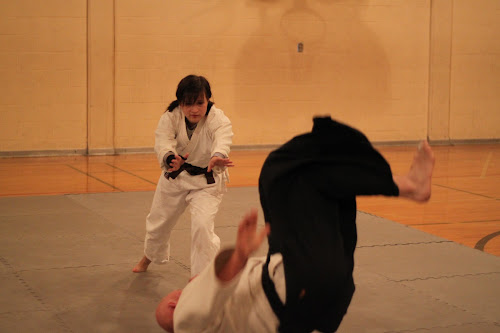 Randoori is the aikido version of sparring multiple opponents. It is the other huge gap I have in my aikido training partly because I was sick and I haven't done it in a while. Too, I wasn't familiar with how they go about it in this association until today! Apparently I was too polite for that portion of the test! I also have some footwork issues and I back up too much which doesn't shock me because I have the same problem when doing, say, kali. Oddly, I'm not discouraged by my showing in the randoori portion. I've been praying all week that I'd come into this with perspective about where I've come from. Aaron even said that I've come a long way--I did the whole seminar when last year I could only watch about an hour because I couldn't sit for that long on the bleachers! So, I'm not too torn up about the rough patches. I'm glad to have them! Hopefully I will feel the same tomorrow. Anyway, here's a photo of the randoori practice. I included this because the size differences are hilarious. 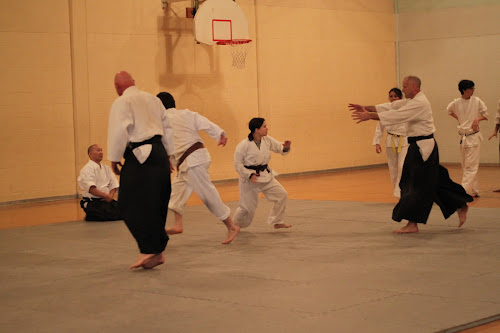 So, we totally had a blast. And you know what made the weekend even more fun? This weekend they had the Japanese Bon Festival at the Botanic Garden so we all went during the lunch break on Saturday! So fun! Mike is kind of shy so rather than go to the dinner, he and Autumn met me at the festival. All I have to say is that I am SO going to make Autumn a yukata. 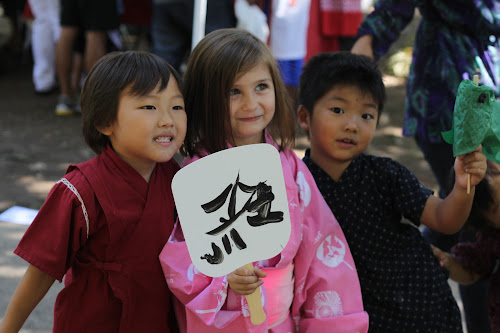 They had a yukata dressing booth and, as you can see from her fan, a calligraphy booth. Autumn liked that so much she went twice! And, I got a chance to get out of my sweaty gi and into some dry clothes! 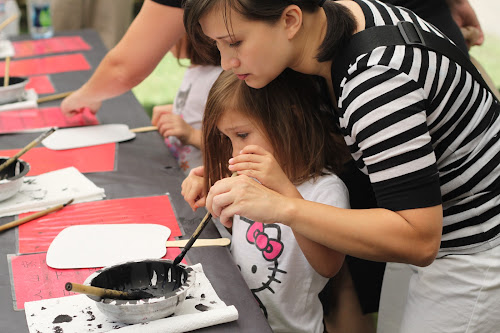 But next year? Next year we're totally doing the festival again and dressing up!!
Posted by Sharaze Colley at 7:41 PM