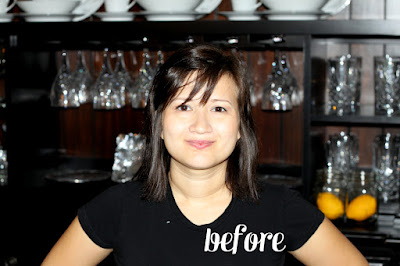 Today is my birthday!! I've had a few friends joke with me about being 29 or 17 or some random not-32 number. I don't mind, though, because I figure I've earned my years! Plus any birthday I get after last summer feels like a gift, in all seriousness. But! Today was a fun day so I won't be bittersweet or melancholy.

I started out the morning at the salon. I decided about a month ago that I wanted to get a funky dye. I used to have fun hair all the time but sometime around 2010 I got tired of the maintenance and went back to my natural color. It's what you see above. I have dark brown hair, although Autumn insists it's black. :) I kind of wanted to do dark red with light/bright red tips and after looking around online, I found some photos of a color process called ombre.

I considered getting my mom to do it but I really wanted this to go smoothly so I decided to go with someone else partly to reduce the potential emotional drama factor. My mom is a great stylist but sometimes because I'm her daughter, I think she lets her ADD run rampant, haha. Once she gave me a haircut completely opposite of what I wanted because she "forgot what the picture looked like." THE PICTURE WAS ON MY LAP. So, yeah. I wanted a no drama cut. I also figured such a drastic change called for someone specifically trained in the technique. Originally, I made an appointment with Lainey's hairstylist, the lady who cut my hair last time. But she said she wasn't trained to do it in red, only brown, and recommended a couple of salons in Midtown. I ended up going with Empire Hair Studio because I have a friend who gets her hair cut there and they had a lot of great reviews. 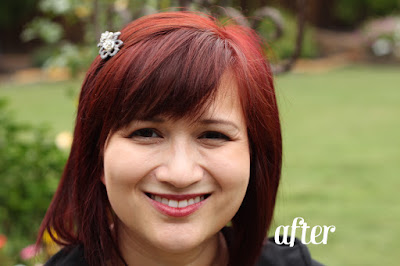 One, holy eye wrinkles, Batman! And two, I like it! A stylist named Don did my hair. Poor guy...he did one set of bleach and dye and it took an hour because I have a ton of hair even though it doesn't really look like it. Another 30 minutes while it processed and in the wash...nothing! Well, almost nothing. The red violet took but the red at the tips? Nothing. Plain, old dark brown hair! So he went to round two. He and an apprentice ended up dealing with me for almost FIVE hours! They were super patient and didn't charge me more than the base price for an ombre. I didn't get quite the drastic change I wanted but I still like it. And the back has the ombre effect. 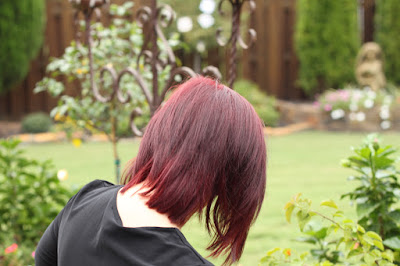 The interesting thing about this dye is how it changes depending on the light. In the sun, it's a bright color. In other lights, it doesn't look too far off my natural color. And I absolutely love the hair cut. Don worked around the crazy swirl that makes my hair fall forward all the time and used it to show off the color dimensions. And although I didn't get quite the funky tips I wanted, Mike really likes it. He was nervous about my new hair because he likes my hair dark. There was much sadness back in the days when I had platinum streaks. No sadness today! Although he does look afraid of the camera here. 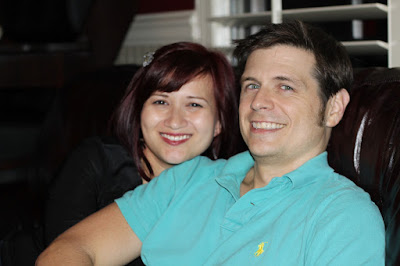 Not only did I get a great hairdo, I had an all around good day. I always feel bad around birthday time when people wish me a happy birthday on Facebook because I am the WORST at that! But it was fun getting messages, posts, and texts wishing me a happy day. Mike got me the latest three Yotsuba& books. Autumn secretly helped Lindsay make this cake for me, too! 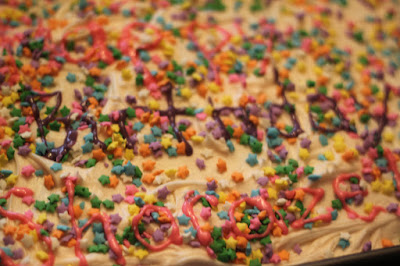 There will be a whole post on this later but we did something super cool tonight! Earlier this month, it was Nanny's 80th birthday. And late last month, they celebrated their 60th anniversary. So, tonight, we surprised them with a party! I did a lot of the printables for the party so I'll post them here soon!

Posted by Sharaze Colley at 8:42 PM