So, I totally had a meltdown before a Halloween party over the weekend. File this under "weird stuff I never thought would be an issue until it was an issue."

We have made some friends at the gym and they invited us to their annual Halloween party. I will take ANY excuse to dress up and Mike really likes his gym crew (I like them, too, but he likes them enough that he's overcome his anti-socialness twice now which is HUGE) so we decided to go. I'm going to do a post on our costumes because we had a blast getting them together but that'll be for another day.

When we arrived, we saw a spooky display in front of the house, although we had to park a few houses down. A cd of creepy lullaby music played. I rather liked the effect until we got up to see exactly what the display looked like.

If you're still reeling from a loss and feeling delicate, don't read any further, okay?

I'm not sure why I reacted so strongly but I seriously burst into tears. I got to the end of the driveway and told Mike I couldn't go any further. He said he felt pretty funky, too, but maybe if I ran past I could get it and not deal with it anymore.

I made into the house and there wasn't anything else terribly disturbing until the guy dressed like someone from the Hangover, which I haven't seen, came in with his undead baby in a carrier. I pretty much avoided him as much as possible. I couldn't eat at all and it took me a while get my mental balance back.

As shallow as it is, this helped. 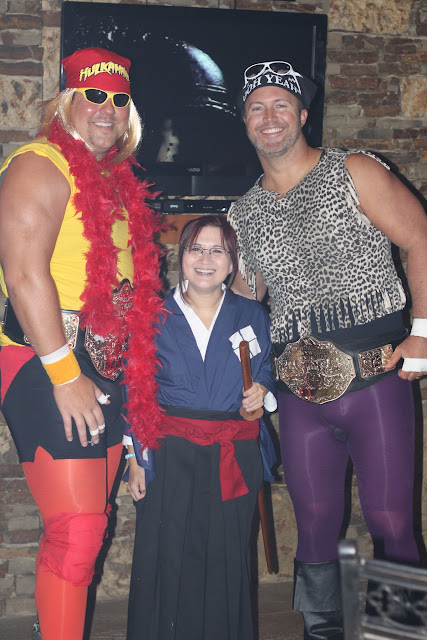 Because, really, if that can't get me out of a funk, nothing will.
Posted by Sharaze Colley at 6:16 PM