Today I taught my last kids' aikido class until January 8. I am so going to miss the kids but I need the break. I went to the doctor yesterday annnnnnd I really was sick! I have a double ear infection, pharyngitis, and a sinus infection. I am armed with an arsenal that will horrify my most granola friends but I DON'T CARE because I already feel better. Still tired. So the rest will be nice.

I happened to come across a great project today. The Sandy Hook Elementary PTSA is collecting home made snowflakes to decorate the school when the kids get back. Here's some more information if you're interested in participating:

The Connecticut PTSA has created a special way that PTA leaders, school employees and families can show their support for Sandy Hook Elementary School. Please encourage local schools and communities to send paper snowflakes for the school via the Connecticut PTSA by Jan. 12:
60 Connolly Parkway
Building 12, Suite 103
Hamden, CT 06514

And a link to a paper snowflake tutorial in case you're like me and need a refresher!

I decided to do this project with the kids at aikido. I spoke to each parent individually before class to see how much they had told their kids. Most told them what I told Autumn when she asked why the flags were half staff. I told her that something sad happened Friday and when she pressed, I said that someone did something bad and a lot of people got hurt and even died. I was concerned about telling her but it went really well and led to good conversation.

By the way, here's another link. This one is to a blog post at KidPower.org. I use their curriculum in my aikido classes and even in my self defense talks. At the end of the post, there are a number of other useful links for talking to your kids about emotional safety after tragedy and answering questions about school shootings. It's good information and not too unlike what we talked to Autumn about after Garrett died.

I had already planned to share a book called Tree of Cranes about a boy's first Christmas in Japan. I read it to my Thursday class and they loved it. It's a beautiful book and mentions the tradition of folding paper cranes for a wish to be granted. The book is not a Christian one and the mother descibes Christmas day as a day when enemies do not fight and there is peace. And that we need more of those days. Appropriate, right?

Afterward, I talked to my students about being compassionate warriors, especially since we practice aikido. The founder of aikido has these kinds of quotes:

To injure an opponent is to injure yourself. To control aggression without inflicting injury is Aikido.

Aikido is not a way to fight with or defeat enemies; it is a way to reconcile the world and make all human beings one family.

And so we made snowflakes! 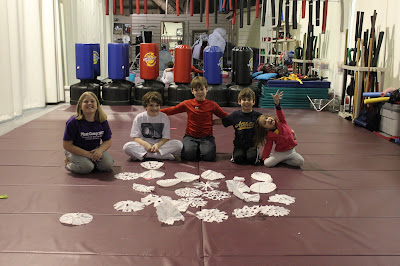 Some of them are a little interesting but I'm going to send them all! 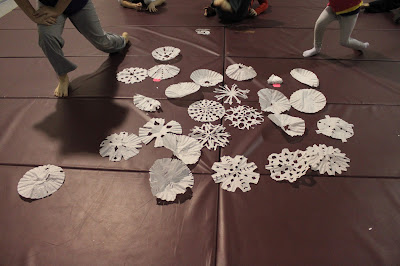 Then we had Japanese Christmas Cake! The one I made today was prettier but I didn't take a picture of it. 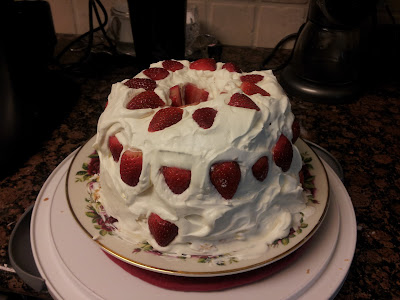 Posted by Sharaze Colley at 9:21 PM