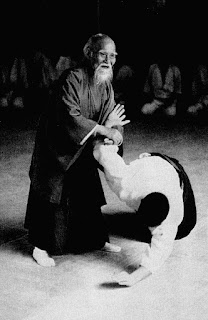 The Art of Peace does not rely on weapons or brute force to succeed; instead we put ourselves in tune with the universe, maintain peace in our own realms, nurture life, and prevent death and destruction. The true meaning of the term samurai is one who serves and adheres to the power of love. ~Morihei Ueshiba, O'Sensei

I'm having a bit of a martial arts crisis. It's a strange place to be. I love martial arts. I love aikido. I have no intention of stopping but...I don't know. I think I might be doing something wrong in how I'm going about obtaining my black belt. Stephan and I had a long talk last night and I'm not going to do anything or make any decisions right now but he and I both agree that something has to change.

I have to visit other schools in order to get the level of training I need to prepare for shodan. I'm the highest ranked student in our school. In addition to that, I've been doing a lot of other martial arts over the years so I do other workshops and seminars aside from aikido. The crazy thing is, I go to seminars where we do much more combat oriented training, and I rarely get hurt. But at the last big aikido seminar I attended in Atlanta, I ended up in a wrist brace for months when a guy from Memphis cranked my hand so hard I had ligament damage.


Yesterday, Stephan and I went to a class where they ran me through a practice test. I did okay until we got to the part that I'm physically struggling with. My lower abdominals are not very strong. I also have a LOT of scarring. I have a difficult time doing hanmi handachi, or fighting someone standing while I am on my knees. I made it clear I needed to go slow and steady while I rebuild and relearn how to move that way.

Well, there's a guy who's been giving me trouble. Lecturing me on how I'm not working hard enough. Talking me through techniques I not only know, but I teach, when I'm obviously doing fine. Throwing me too hard and far when I tell him I need to take a fall gently. I've tried talking to him and I even spoke to the head of the dojo about him but the only advice was to avoid him and that I'm not the only one who has complained. That works until it's a small class. Which the advanced class is.

This guy was my partner for hanmi handachi. I wasn't amazing but I get a little better every time. And then he kicked me. In the chest. We had never dealt with kicks. I know how to deal with being kicked in other contexts but not on my knees, when I'm already having trouble, and when I am not supposed to get up. I tried to dodge but he landed it. And then he did it again and all I could do, again, was try to move. I got a few good defenses off but at one point, I made a mistake and he very deliberately fell heavily on top of me. I've dropped people on top of myself before. People have dropped me on themselves, too. We usually try to catch ourselves and we laugh but he was grim and did nothing to make sure he didn't smash me.


The next thing we did was 4 person randoori, or something where I have to dodge and flow around people. This is another place I am rusty because we did this differently from how this school does it. I dodged the first person. And the next was the guy who had been giving me trouble. He bore down on me so I couldn't move him. I tried to move around him since he wasn't going anywhere and then. he. shoved. me.

My hip collapsed and I went flying across the mat. I twisted and landed on my back. I don't know what happened but something snapped. Penny thinks it was an adhesion in one of my scars. I spent the next several minutes curled up in a ball, in tears. Afterward, I had it out with the guy who tossed me like that. He swears that I fell which, if you think about it, doesn't that sound like a typical abuser phrase? Stephan and my friend Matt didn't really see what happened but both agree that I landed at an angle and distance that isn't consistent with a fall. Whatever he believes he did, this guy has been bullying me for months and I am done with it. The teacher in charge was kind. But because the bullying guy is higher ranked, there is literally nothing he can do except talk to the head of the dojo.


I don't know what I'm going to do. I do know I'm not going to be abused. O'Sensei, the founder of aikido, said that to injure an opponent is to injure yourself. To control aggression without inflicting injury is Aikido. I feel like this is what sets aikido apart from other martial arts and why I love it so much. I'm planning to do some thinking and praying and talking to other martial artists I trust. Mike and I will need to talk, too. He isn't happy about yesterday and although he says he trusts me to make the right choice, I know he has never quite gotten over how sick I was. While he never liked me getting hurt before, now it's extra hard on him. He was super quiet last night after I told him about class. Getting my black belt this year isn't worth that.

(edited to add...I just read my old aikido tagged posts and all of this is consistent with everything I've written about my physical journey! It's kind of cool having a written record.)
Posted by Sharaze Colley at 8:46 AM