It's been a while since my last fitness picture update, hasn't it? Just over 6 months ago. I really have no good excuses. It started off as simply slower progress which is pretty normal. And then the holidays and Colley Winter Birthday Season brought fancy foods, haha. We eat pretty healthy but over the holidays I definitely had a lot of dessert. After that, I found that I put on a little weight and I was really down about it because I've been working so hard. Once I started thinking clearly, though, I realized that my pants and other clothes fit despite the weight, so it was time to find out what kind of extra pounds I am sporting. I'm glad I did! I still have some goals but I'm not nearly as down as I was just yesterday! By the way, I have the wrong month on the 2012 pictures! They are from August, not September.

Some information: It has been about 18 months since I started taking photos. When I got out of the hospital 21 months ago, I weighed more than 140 pounds and I could only walk short distances and couldn't sit upright for more than 20 minutes. I have had 3 abdominal surgeries in total. Also, I am 4'11" and weighed 105 pounds before I got pregnant with Garrett. I take 2-3 strength and cardio classes at the gym a week and I am usually teaching or taking aikido at least 3 days a week. Lately, I've been doing a mini pilates workout with a medicine ball on the days I don't get a full work out. Because of my hip and some trouble with my abdomen, I've been going somewhat easy the last 2 weeks but I'm getting back to it now. 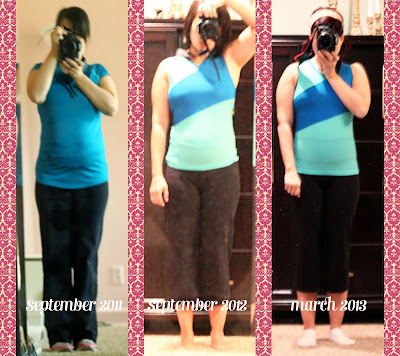 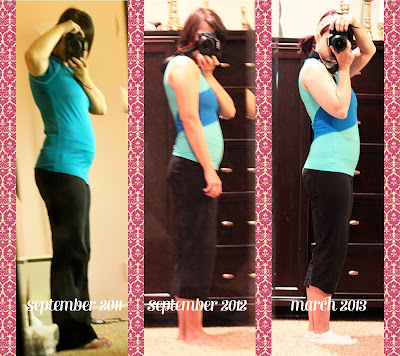 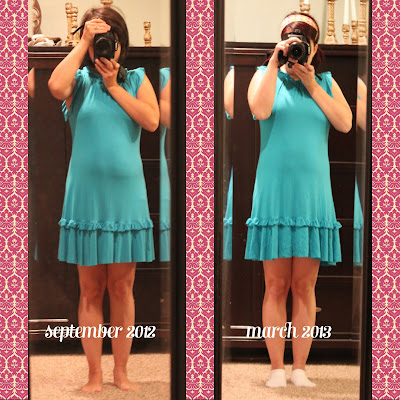 I am beyond thrilled. I am still working on some functionality but strength-wise, I am improved even over my pre-pregnancy abilities. I upped my dumbbells in my fitness classes to 10, 12, and 15 pounds. That's pretty huge because even 10 years ago when I did boot camp with Tony, I used 5, 8, and 10 pound weights. It's tough to see because of the chest in the background, but my legs are really filling out in a good way. My pants fit much more smoothly down my hips/quads/hamstrings rather than just being tight in the hips and hanging loosely from there.

As far as goals, I'd like to see my arms and stomach become a little more toned. My arms have always had a tendency to get bigger but not necessarily more muscular looking when I'm working them out a lot. It happened in kali when I started using the big sticks. I'm guessing my stomach will be dead last to get more toned but despite that, I've been eying some two pieces. High waisted ones, but still! The scar in the middle of my stomach is pretty ugly and I'm not ready for that to be on display. I asked Mike what he thought about getting a tattoo over it. :P He said no, of course, and I was only half serious.

I have this continuous, ever-growing blog to-do list, hahaha. Right now I have a project, more information on the aikido situation, and my fitness certification plans coming up in the next week or so! But, I'm glad I got this one out of the way because I needed the encouragement even though getting the photos and measurements together was quite the task!
Posted by Sharaze Colley at 7:48 PM