I finished re-covering my old Target ottomans! I didn't do a slipcover because it looked really...precise. I am truly terrible at cutting in a straight line. There's a reason I never shared the laminated cotton placemats I made. I call them my surrealist placemats! Back to the ottomans, though, you can see the before on the left...they needed the update. But wait, there is mooooore.... 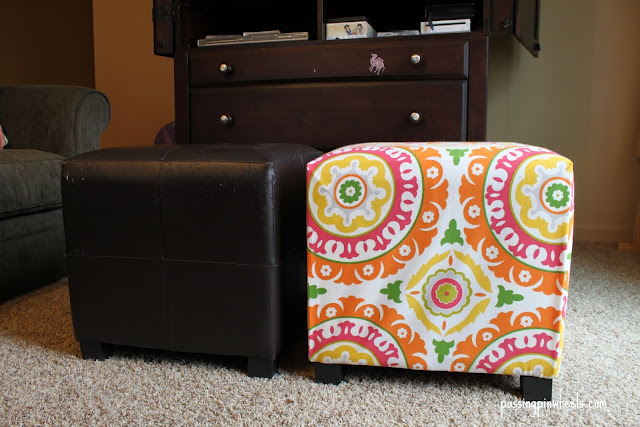 Molly has her claws. We didn't have her declawed partly because it seemed kind of sad to do and partly because she isn't much of a scratcher. Except for one thing. Fake leather. She loooooves sinking her claws into fake leather. Sigh.We had these in the playroom because they looked so rough. But we never use them so it was just clutter. I figure on the rare occasion we have a movie night (we tend to be eat and chat entertainers), we can just bring them back upstairs. 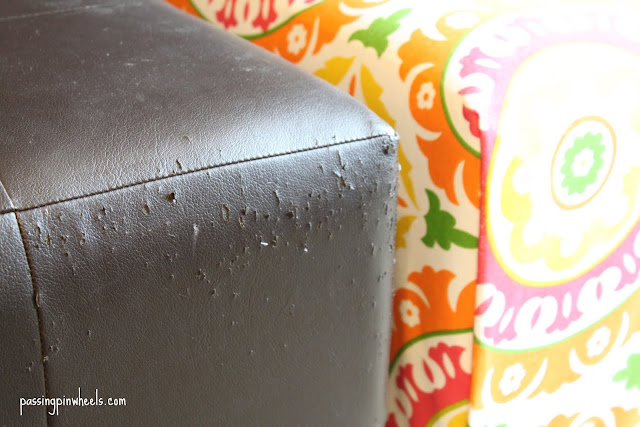 Most people who read here know our house is a work in progress! It's three times the size of our very small former house so we've been very, very slowly trying to make it homey and a place people like to come. Fortunately, I can cook! Hahaha. So people come for the food and company rather than the ambiance but maybe someday it'll be for all three. Anyway, I've worked my way through the playroom and the dining room on the cheap. Now I'm on to the living room! I wanted something bright and colorful. Mike assures me that I achieved that goal with this Waverly Solar Flare fabric I got on sale at Joann. 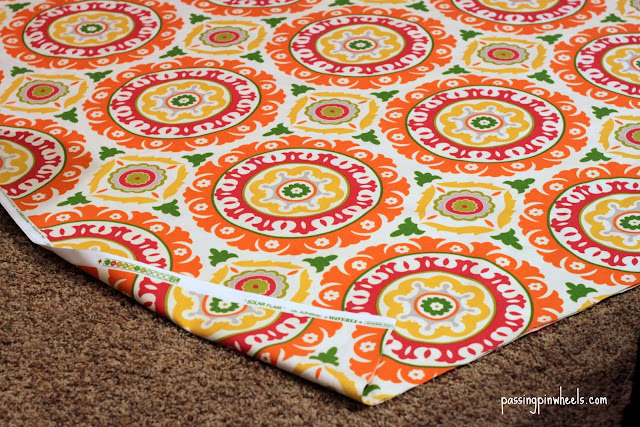 I didn't bother with centering the fabric because I didn't want to make my first upholstery project any harder. So, I just folded the fabric in half, cut it, laid it right side down, and set the ottoman upside down on top after taking the legs off. There are a ton of tutorials out there on how to staple fabric to a cube ottoman. I couldn't find many details about how to do the corners so just in case someone else looked in vain, here you go. At this point, I've stapled everything up to the corners. 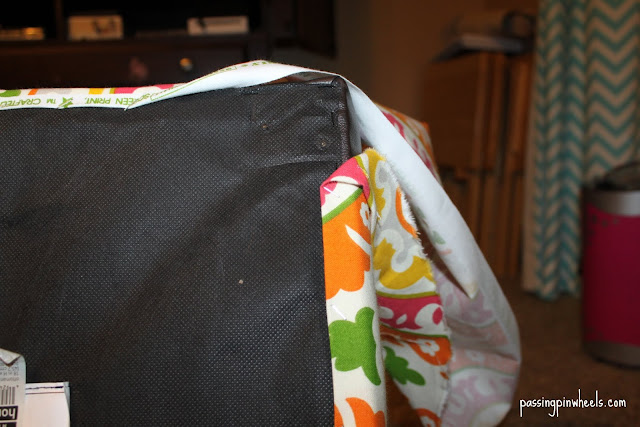 I had a lot of fabric at the edges. I have seen people do an envelope fold on the side so it looks like a triangle but I wanted mine to be tucked in. 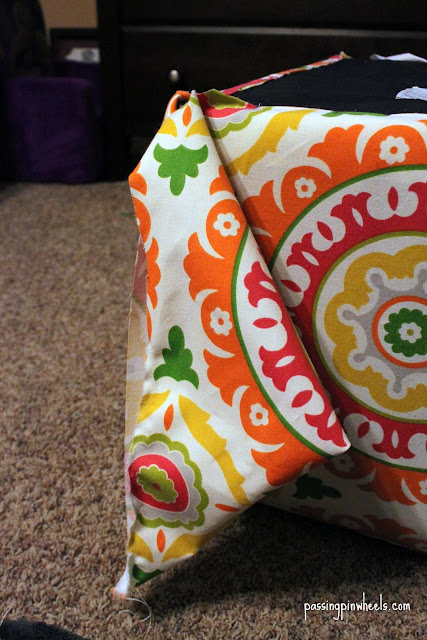 I pulled the fabric forward... 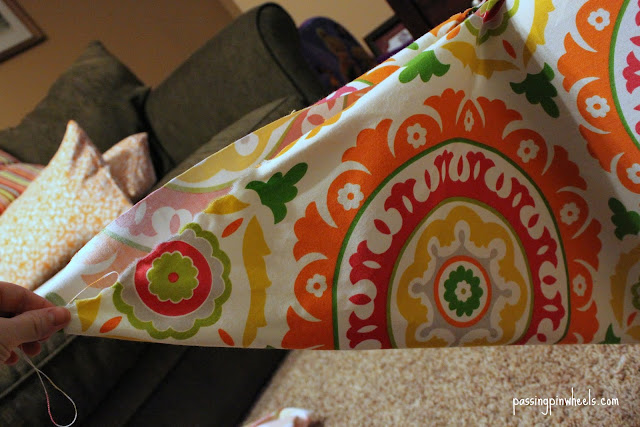 and I cut a chunk of it off. 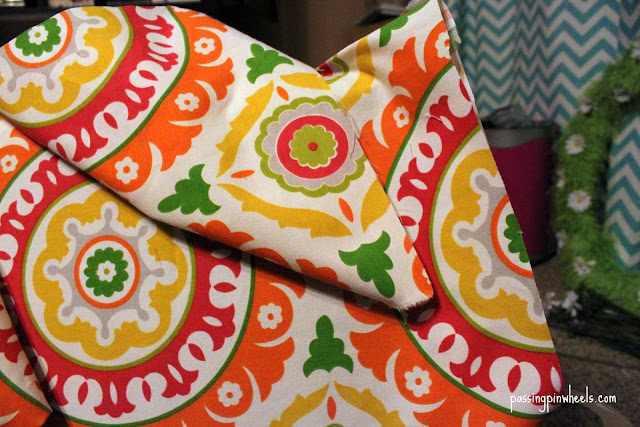 I had to do a little trimming to make it smooth, but I took one side of the fabric and tucked it flush against the ottoman (fake) leather and stapled it in place. Then, I folded the other flap, um, against itself? This is why I have photos! 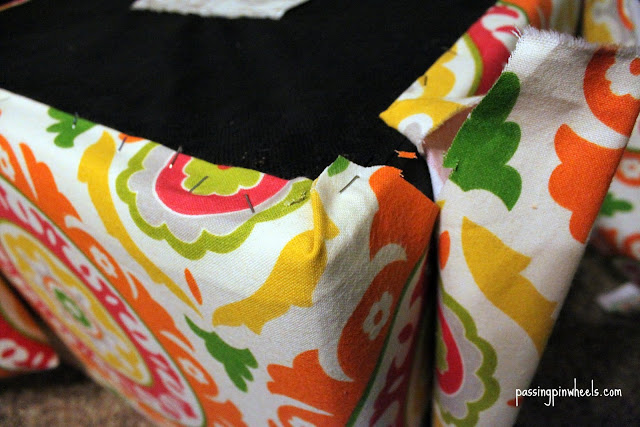 Once the pieces are folded, the will look something like this. The trick here is to make sure that the fold is straight along the corner. 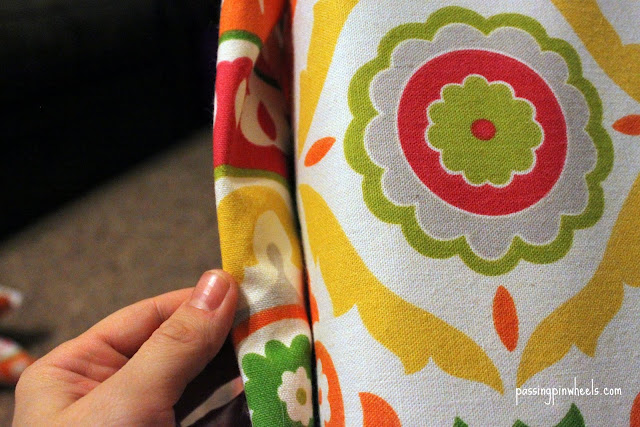 And then staple! I pierced the fabric to make it easier to screw the legs back on. The little screwdriver was my placeholder as I stapled. 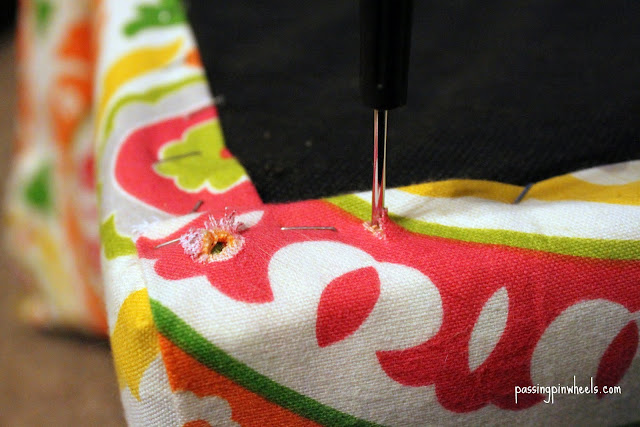 After I finished all four corners, I used a bigger screwdriver to make sure the creases were snug. 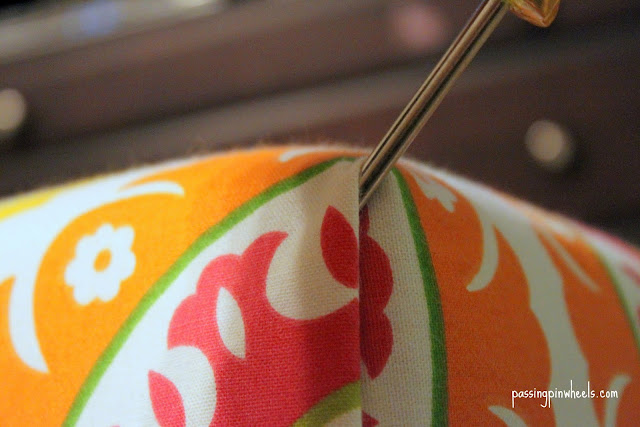 Voila! I'm sure there was an easier way but wait a few days to tell me, hahaha. 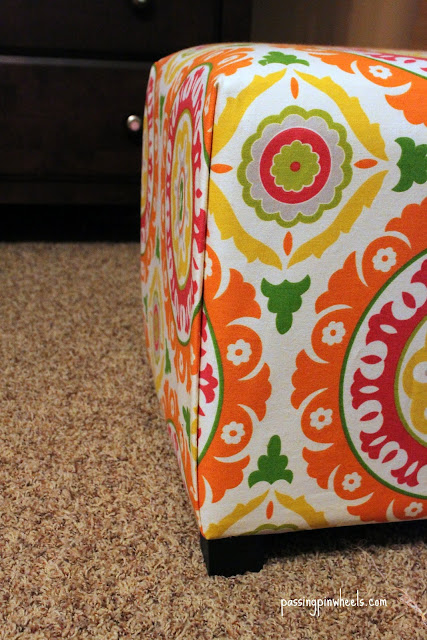 I looks pretty good, though! Even around the legs. 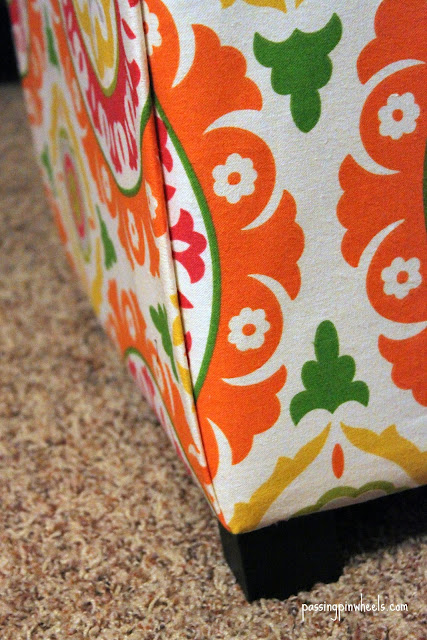 I decided to add a little insurance. I ran a line of hot glue gun down each crease. This is still removable because the glue is on the fabric and not on the ottoman itself. 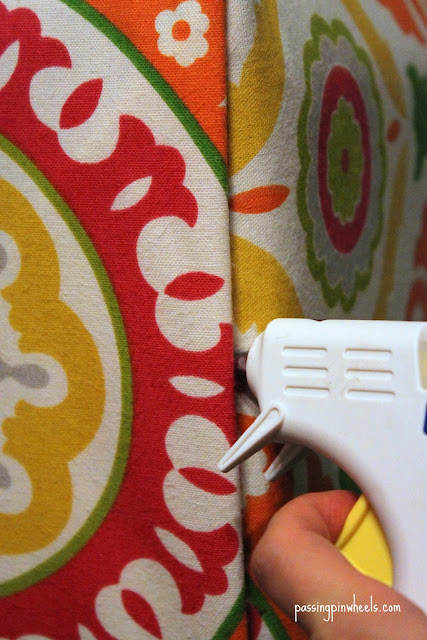 Also, I made sure that the creases were on the same side. So when you look at it from this angle, you can see the creases. But from the sides, it's smooth like in the first photo. 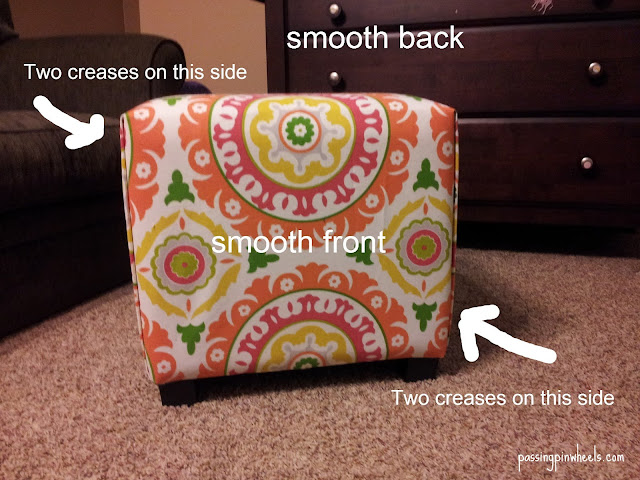 It took me two nights of watching Monk or Castle episodes to get it done which I consider not too bad for a first attempt that turned out pretty well! I put the ottomans under the window (which, incidentally, overlooks one of our back yard "to do" zones). 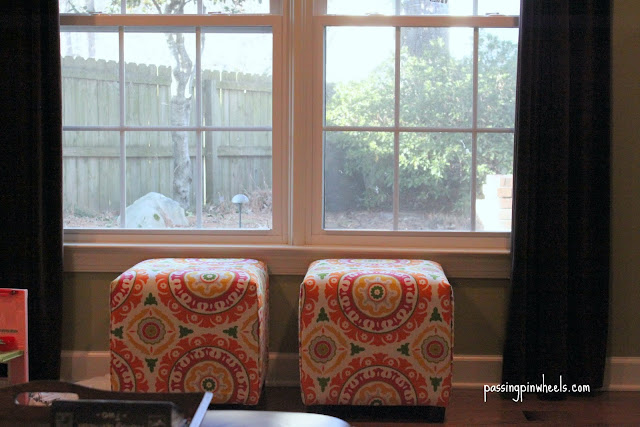 I pulled them into the "conversation circle" to see how they look. I like! Of course, the someday dream is to have a couple of chairs and a little reading table BUT that's some ways down the line unless I get around to those estate sales I always say I want to do. Maybe when it's warmer. 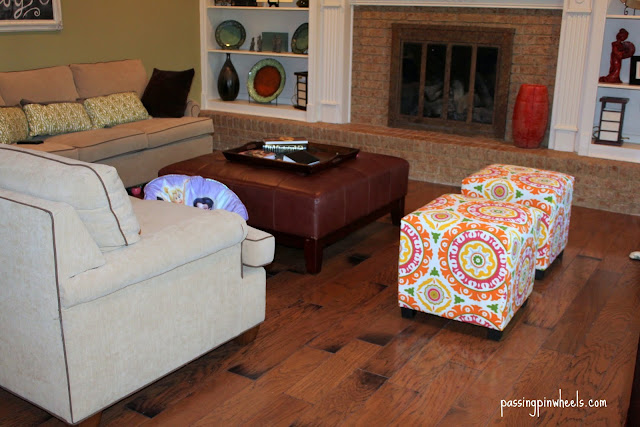 Ha, you can see I didn't clean up our ottoman tray or Autumn's little saucer chair. Or Mike's favorite blanket...WE DO IT REAL. Autumn approves of the ottomans. Molly has ignored them since they are no longer leather. Actually...I'm really hoping that she doesn't notice that the big coffee table ottoman thing is also leathery. But it's a soft leathery and she's usually attracted to the harder stuff. Like the trunk in the playroom. T_T 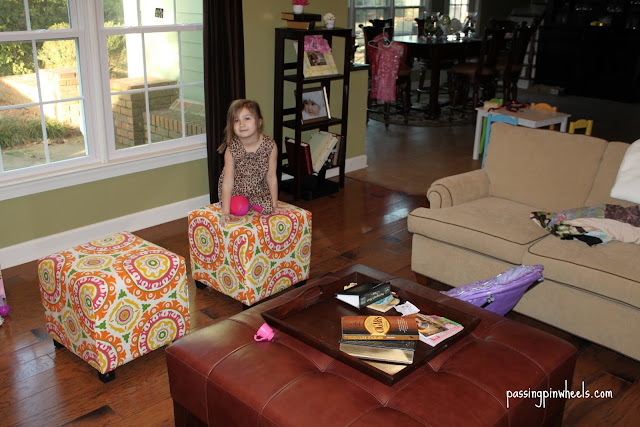 And that's it! My not-really-a-tutorial tutorial on how to do corners on a stapling ottoman recover! I think my next big project will be a painted drop cloth rug. I want a rug. I want it for the look of the room but also to absorb some of the noise. With almost no cloth downstairs and a lot of stone and wood, sound echos and bounces like crazy! I love this rug from Anthropologie but in the size we would need it? That's almost half of what we still need to save for the adoption! I have no illusions that I can paint anything remotely that awesome but maybe I can do something that would tide us over until I can find something reasonable! Anyone have any pattern/color suggestions? With the drop cloth I'm looking at costing less than $10, I'd even be willing to buy a large stencil!

{Submitted to Made by You Monday at Skip to My Lou!}
Posted by Sharaze Colley at 7:16 PM