Tomorrow, my mom's friend Jackie is getting married! Jackie and my mom are totally the odd couple. Mike's mom giggles whenever Jackie comes up because, seriously, these two could have a reality show! Jackie started working with my mom a few years ago and they've been friends ever since. So, when Jackie got engaged a couple of months ago, everyone asked my mom if she was going to throw a party. 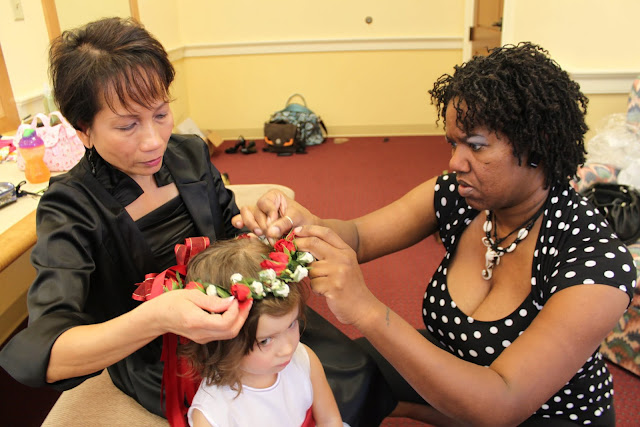 My mom is not much of a party planner so I volunteered to do most of the work because, seriously, a party I don't have to pay for? I'm all over that. After consulting with my mom and one of Jackie's customers who wanted to help, we settled on a Belly Dance Bachelorette Party! Autumn's birthday party was the day before so I got to reuse a lot of the same decorations. I did purple and blue for the Under the Sea party so I just had to add in a little orange. Not too bad! 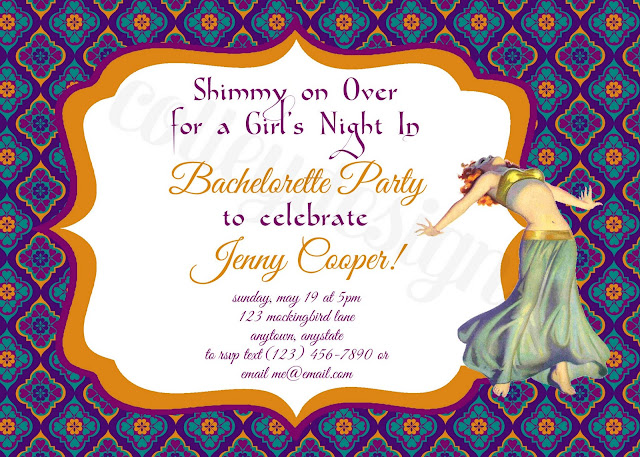 I love this deco mesh stuff that Cheri and Lainey introduced to me. I found this beautiful blue at Hobby Lobby. I didn't realize it at the time, but in the different lights, it changes colors slightly! I got that and the purple either on sale or with a coupon. I had some moroccan looking fabric scraps from a couple of dresses I made Autumn over the years so I put those down before draping the deco mesh. I wanted a layered look and I'm pretty happy with it. I also just had the orange and blue balls and the blue candlesticks as well as the purple chargers. (ps, I bought the dancing lady art from Digital Decades on Etsy.) 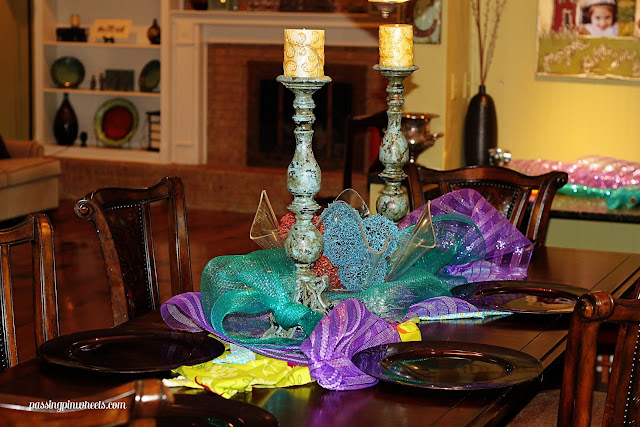 I saw someone wrap their drink jars with burlap and totally stole the idea but with the mesh ribbon. I love how it dressed it up! We only served water, white sangria, and sweet tea at this event. I think I'm going to buy one of these drink spigot things for myself because I borrow Lainey's all the time. One of hers is a good size but this one is just really huge and hard to clean! 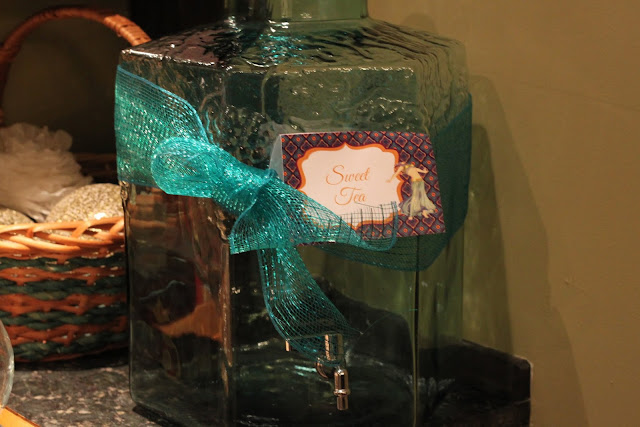 Working around to the living room, on the table just inside the door, I put the belly dancing skirts which were the party favors and my Dance with Melissa sign! I had the big signs printed at Costco's photo department to have mercy on my printer. 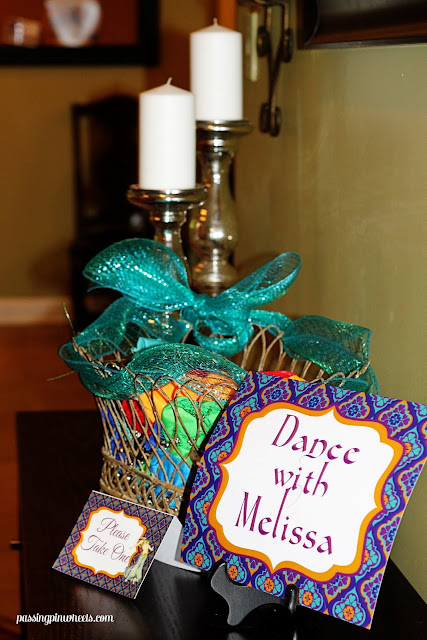 I got a lot of 12 skirts from Ebay. I did a lot of research on prices but even at the cheapest price, it was tough to make the decision to buy the skirts. I'm really glad I did, though. Everyone seemed really excited to get their skirts and I think having them added an element of fun that made it easier to try the dancing. Well, that and sangria. Which I know is Mexican BUT I make the best sangria and it's Jackie's favorite drink! 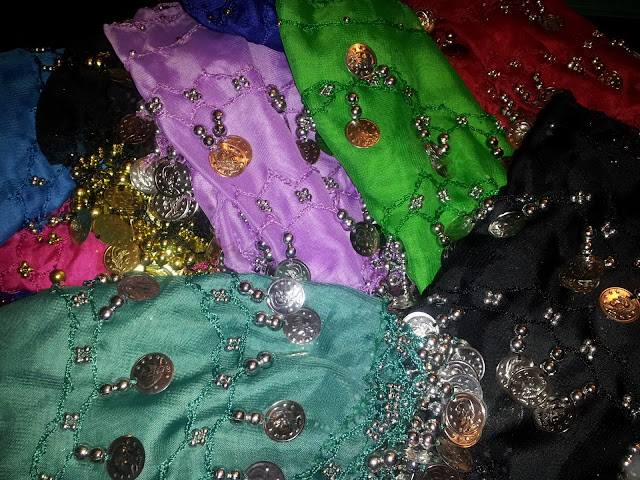 The belly dancing class was SO MUCH FUN!! Melissa did a fabulous job and I am so happy to say that just about everyone participated. I cleared out the living room, only leaving the sofa, so that we'd have enough room to dance. We did two songs and I had such a good time that I might go try a zumba class!! I never ever ever thought that's something I'd consider but, while I'd be terrible, it would be so fun to do with a bunch of friends! 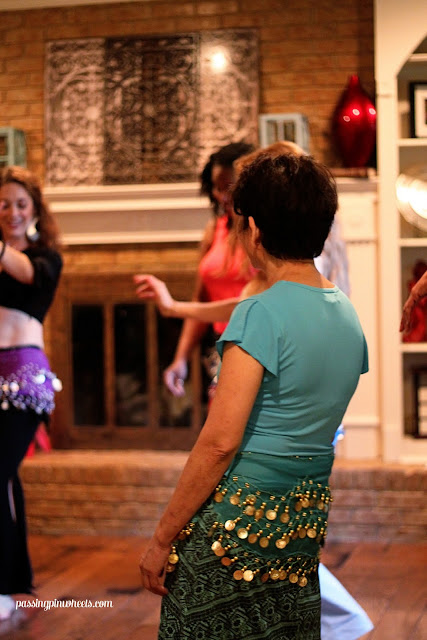 My friend Christy did henna tattoos and she did such a fabulous job. When the party first started it was really quiet and I was getting worried that everyone was going to leave and be like "Nema's daughter throws lame parties." The henna was a huge icebreaker. Once I convinced some of them to get started, the laughing and talking and moving from room to room really started. I bought the henna from Henna Caravan and we have so much left over. I moved the love seat and ottoman into Mike's office and set up a little tray for Christy's tattoo items. 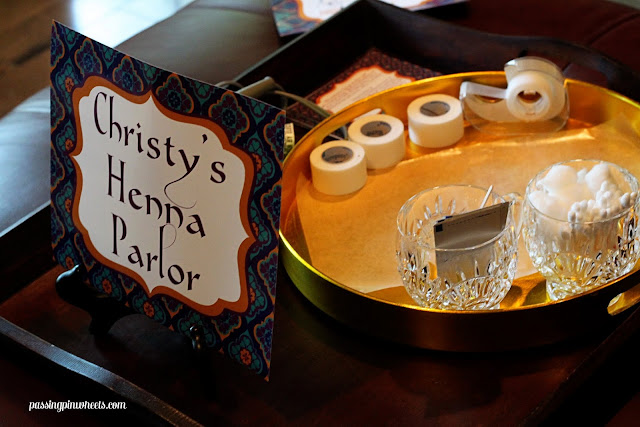 I also made some Henna After Care cards for everyone to take home. We thought about just telling people what to do but figured having a sheet would be better. The henna held up really well! Mine lasted a little less than a week but that's because I was in the ocean a lot. 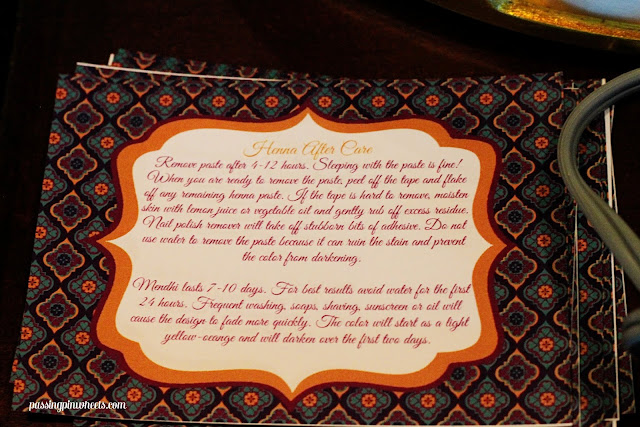 When Christy came over to practice, she did one on Autumn. How cute is this?? Hers lasted a long time, too! 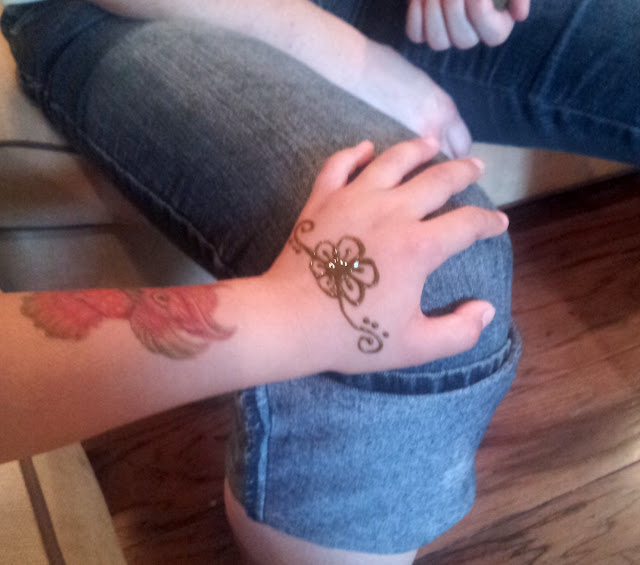 Moving into the dining room, I set up this fantastic glitter frame I found at Hobby Lobby for half off. I plan on using it at every party I can!! I added orange napkins to the purple and blue combination from Autumn's party. I borrowed some cute votive holders from lainey and put LED tealights in some of them and roses from our garden in others. I tried to go with layers and light all around. 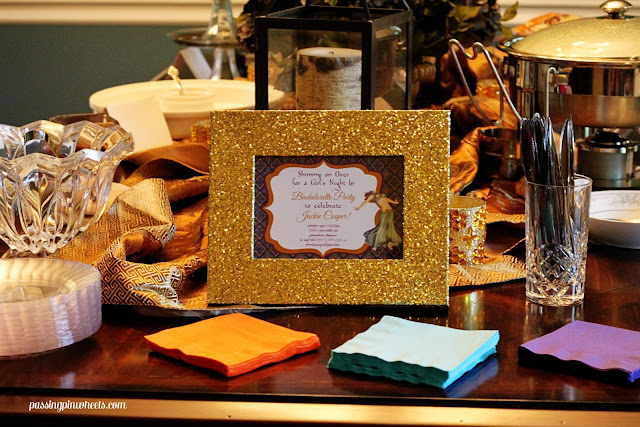 These are the food tent cards. I think I might sell this set with the optional belly dancer. I served hummus pita chips and veggies, strawberries, spanakopita from Costco, and baklava. Jackie's friend brought a pretty cake from Costco and I cannot believe I didn't get a photo. I didn't get one of the bar at all! 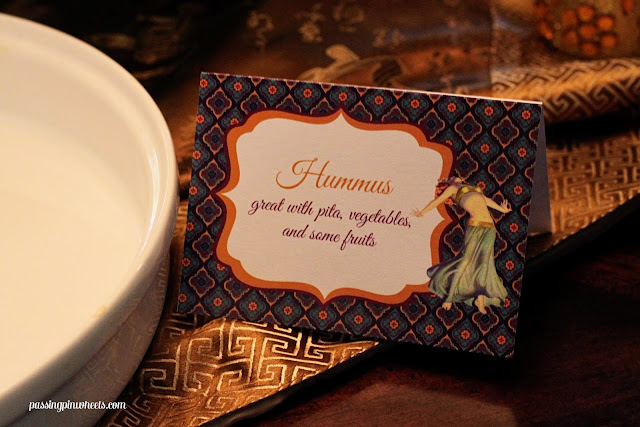 The most popular food was this Moroccan Chicken from Costco. I served it over rice that I cooked with chicken broth and I had pita bread and tzaziki on the side. Oh, my goodness, it was amazing. So good that we bought some for ourselves this week. I made sandwiches out of it with naan, tzaziki, lettuce, and tomato. 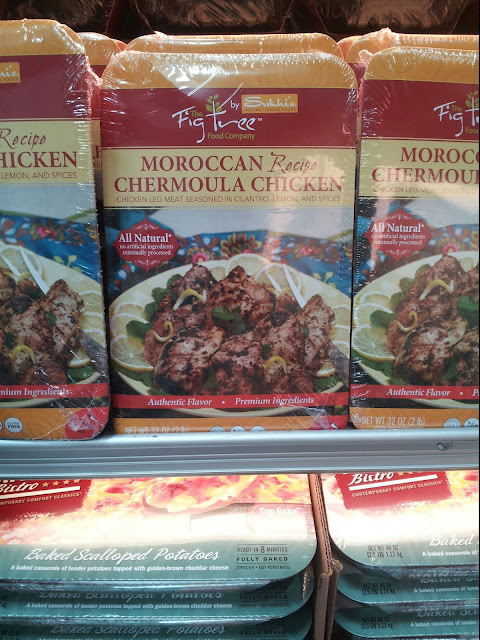 I did a terrible job photographing this party...I didn't get a full table photo but this is what it looked like before the chafing dishes and bowls. Mike's brother Brad bought me that cloth in China and I use it all the time. I love it. 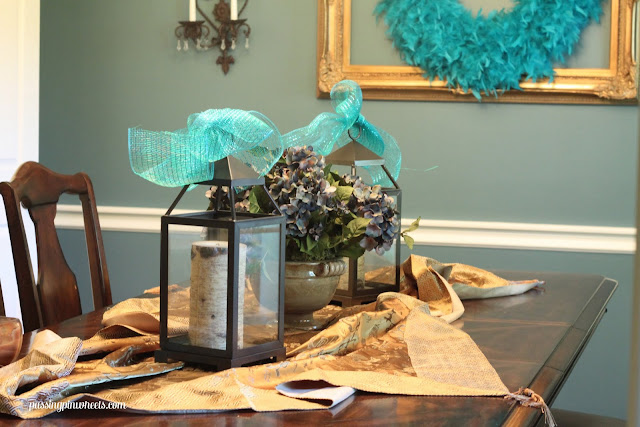 I made this wreath for Autumn's party and I LOVE IT. The only thing is that it cost a bit more to make than I expected. I had a grapevine wreath I bought a month or two ago when I made our door wreath (I never posted about that, did I? I should...it's a fun wreath) and it took 4 boas to cover this thing. I kind of wish I hung it differently but I still like it. It looked pretty awesome at Autumn's party, too! 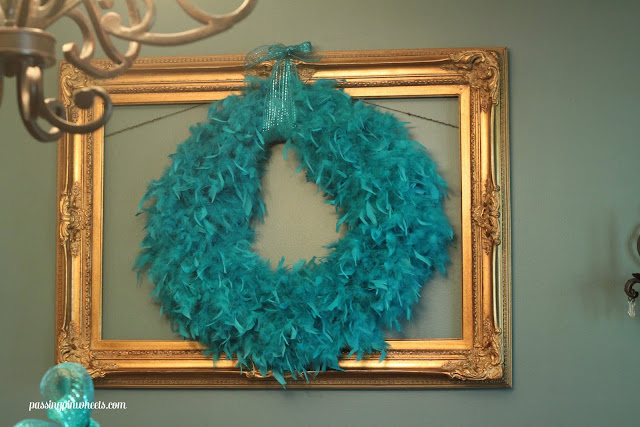 Altogether, this was a pretty inexpensive party, although it was cheating a bit to have friends do the henna and dancing and reusing the decorations from Autumn's party and things I just had around the house. I had a great time planning it and I am so glad that everyone had a good time!

Oh, by the way! I made her wedding invitations. She asked for elephants and I ended up doing an Indian style elephant for her. I think that started the belly dancing and henna train of thought! 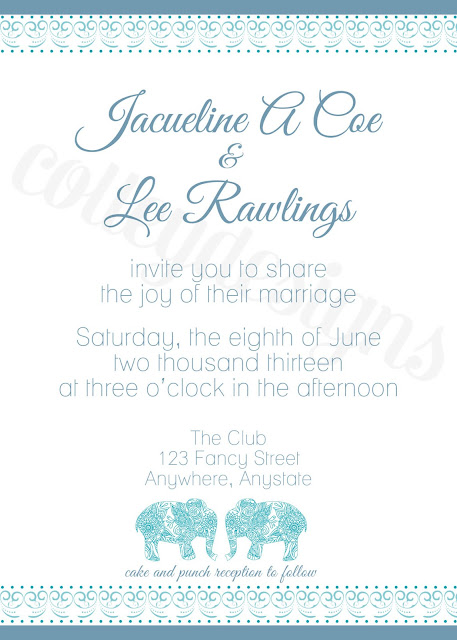