You have GOT to watch the video above. I have a student named Evie who has been with me ever since I started teaching the preschool class. Her dad has been filming in that class for the last three weeks and this is the result. Hysterical and AWESOME. Also, I have our summer camp and workshops on the aikido calendar if you're interested. I'm going to add a page with details when I get a chance.

Also, I have GRAND NEWS: 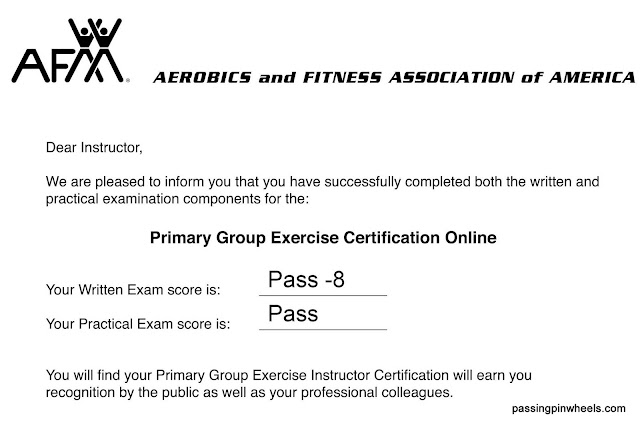 Woohoo!!! I'm officially a Group Fitness Instructor!! I'm going to try to get on the sub list at a few smaller gyms and maybe pick up a class or two at Collierville Arts where I teach aikido. Mullins is also interested in a fitness kickboxing class so hopefully by this fall I might have enough experience to try to get a regular class or two somewhere in the mornings!

I'm rather looking forward to getting to stand in front of a class and people watch. It'll probably be a weird combination of fun and horrible. Since Heather is no longer with us, one of the instructors has encouraged us to move around to find new Spots so that looking at her Spot isn't quite so sad. We're like a bunch of Baptists who have their Row and Heaven forbid someone encroach. :P Mike always stands on the very front row. I just can't do it because I don't like standing on the same row as the teacher. Mike thinks it's a martial arts etiquette thing and he is probably right.

When we were talking on Facebook about shuffling around, one of the instructors said, "Nothing good can be seen from the back row!" SO RIGHT. I mean, I stand on the second row and I see crazy stuff. I'm kind of baffled as to why people come to class sometimes. There was this one lady, she was hilarious. I am pretty sure that day's after class text to Mike read, "I think there was a crazy person in class."

She came in 20 minutes late (whyyy?). Usually for class, we get one step, one or two sets of risers, a mat, and three sets of dumbbells. She had a step. And a dumbbell. One. One dumbbell. And...she proceed to do the entire class that way. And then sometimes she'd kind of stop and pose. Like, maybe she was sleepwalking? And then, as suddenly as she came in, she packed her stuff up 10 minutes early and wandered away.

Another time, a lady came in, also 20 minutes late. Apparently, the entertaining people are the very latecomers. I...I'm not sure what class she was in inside her head. She had these teeny tiny weights. The kind you can hold in your hand all at the same time that the senior citizens tend to use for their classes. And then a set of 8's that I don't think she touched much. During our squats and lunges she was doing 80s style step aerobics. When we did triceps push ups against the wall, she did upside down splits against the wall.


(I totally wore a unitard for my practical exam)

Actually, this isn't from the gym but back in high school when I was in kung fu, there was a lady who would do stuff like that. She'd do splits against the wall and instead of stances she'd pose. She was in incredible shape. But...she liked to wear hot pants and a sports bra. While doing her wall splits, stances, and other martial arts moves. It was, er, an anatomy lesson. Oh, man. Do I have stories about people and their clothes...

But we'll save that for another day!

I'm pretty excited about passing my test. I'll probably write more about the actual test once I've recovered from it. I'm also thinking about posting a video of what I did for my warm up/cardio/cool down demonstration as well as the part where I had to teach three levels of an exercise. I didn't find much out there and it would have been a big help. What little I did find was great!

Oh, and if you haven't heard, there's a Zumbathon to raise money for Heather Palumbo's children! They are also hosting a silent auction--I donated a custom digital party package. I really hope someone bids on it! 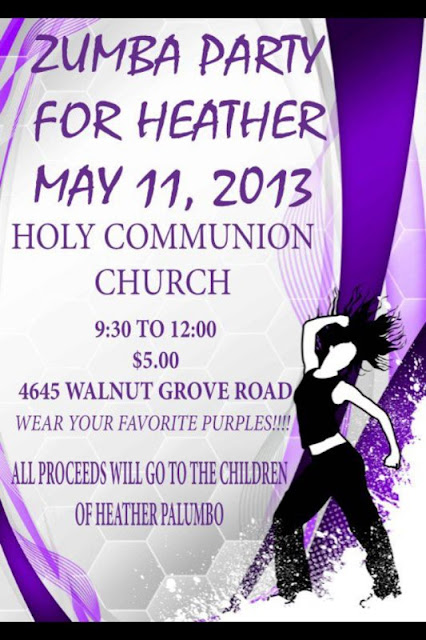 Posted by Sharaze Colley at 3:54 PM