As you might have noticed, one of the best things about going to gym for me? The characters I get to meet and interact with. Although, to be honest, I don't always appreciate how good the story will be when I'm going through it.

This happened long enough ago that I think I can safely talk about it. I don't think anyone we're training with now was there when this guy, I'll call him George, graced us with his presence. George was nice enough. Polite. Friendly. A little odd. He was (is?) a pastor in a small town who would drive into the city to take classes.

All martial arts have rituals. Bowing, clapping, mat sweeping, you know, stuff you usually see in kung fu movies. I haven't had to do it in a long time but I used to have to tell people about how we aren't worshiping anything or anyone, it's just how (in the case of aikido) the Japanese show respect. And, because we are a Japanese art with ties to the original dojo, we do a lot of bowing and clapping and onegaishimasu-ing. And we have a picture of the founder on the wall out of respect.

Well, George wasn't a fan. At all. He would not bow in or out of class because he felt that bowing when there was a picture on the wall was like worshiping a graven image. I can't remember if he'd bow to his partner and say onegaishimasu. Fine. Not a huge deal. I've seen people stay out the bowing and do it respectfully. 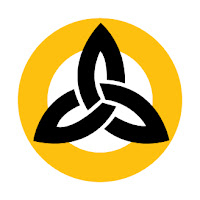 But then it got weird. Although now we have our own logo, back then we just used the logo of Stephan's home school in Utah. It's pictured on the left. To me, it looks more like a Celtic trinity knot than any kind of Japanese symbol. But George didn't like our logo at all. He didn't want it on his clothes or on his test certificates and even asked if we'd consider changing it! Why? He thought it looked like a 666. I mean, maybe? If I turn my head sideways and squint a little? 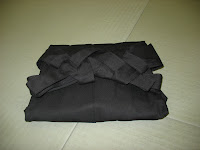 And then it got more weird. We wear hakama after a certain rank, the black skirty looking things that are actually pants. I generally wear shorts under mine because they get hot. And in the winter I wear underarmor cold gear leggings. After class, I have to fold mine up nicely since my equipment lives in the car. A lot of schools have lockers or hanging areas but we haven't ever really done that.

One day, I was doing my usual folding the hakama on the mat routine--while wearing my long gi top and belt--when George came up to me. He asked me to go in the closet to fold my hakama because my legs were a temptation!!! Ok, first of all, gross, and second of all, NO. I told him that if he had a problem with me doing what I had been doing for ages before he showed up, HE could go in the closet while I finished!

I should have expected what was coming next. One day, I was demonstrating a technique. He wasn't doing something right so I did the technique to him to show him how it should feel. I do this all the time and had demo'd on him before but for some reason, he was a little odd about that particular time.

The next time he came to class, he had an announcement. "Jesus came to me in a dream and told me I was no longer to touch women even to shake hands."

Really. Jesus. Jesus came to you in a dream to tell you that. Privately, Stephan said, "I think Jesus is code for his WIFE."

I had about had it with George. I get that some orthodox religions don't allow interaction between men and women. But, really, this wasn't one of those cases. We aren't a large school where you can pick and choose who you train with. And he isn't Muslim or Jewish or a member of some FLDS group. Just a weird dude using religion to manipulate us.


I took a deep breath and told him that I wouldn't make him violate the command that JESUS HIMSELF came down to deliver. "HOWEVER, I am the senior student and an instructor. I will teach whenever Stephan is unavailable. I will teach when we are covering something I teach well. I make a lot of the decisions about the school because I am the administrator. The school is small and you will not get your maximum training here if you cut out training with me. As long as you can deal with that and a woman in leadership, I don't care what you do."

He actually lasted a little while after that. Eventually, Stephan decided he wanted to take a break from teaching (it was brief because I badgered him back) and George shopped around at the other schools, giving them his list of demands: No Satanic symbols, no bowing, no touching women, no women allowed to fold hakama in his sight, among, I'm sure, other things! One school wouldn't even talk to him. The other told him that he wouldn't be a good fit with his "requests" and to consider other places.

I don't know what ever happened to George. I get vaguely concerned that he'll show up again, haha. But I don't think he will because our main school is a very, very long drive from his small town in Arkansas. At the time, I wanted to strangle him about every other day but now the memories tickle me and he's one of my favorite dojo stories!