WGA: In which I discover camo belts are a thing

When I started teaching kids aikido three years ago, I basically started from ground zero. Stephan had other things going on so I was on my own with memories of kids classes I've assisted in and attended in aikido and kenpo several years before and the internet for ideas. Both the preschool and elementary/middle school classes have gone through many stages as I've learned new teaching techniques and gotten advice from other teachers, occupational therapists, and school directors. I'm sure my classes will continue to evolve but I'm in a pretty good groove. I teach the preschoolers Kidpower skills, give them a Japanese snack, run them through developmental exercises, do basic martial arts moves with them, and they either do teamwork games or skill development games. My older kids classes are pretty much like much more slowly progressing adult classes. I don't really do aiki games with them although we might have to go back to that and simpler partner practice for the summer because there are so many new students.

Now, I am facing a new and monumental decision for my classes. Do I include the camo belt?? 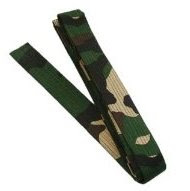 Actually, without even thinking about it? The answer is no. No, I don't. Ha!

The first time I saw a camo belt, I thought, "wait, what?" We were at a gym and there's a class Mike and I would walk by sometimes. I always giggle a little when I see them because it's a group that has a reputation for being a McDojo, a school that is fast rank but little substance. Mike pokes me every time because he thinks I'm being mean but I truly am simply tickled at how serious they look. And, I'm a little off mainstream thought here, but if you know what you're getting and you like it? Go for the McDojo! I don't see why not, you know? The bad thing is that most people don't know what they are getting.

But that's another blog post! Back to the camo belt, I wondered about it and talked about it with different martial arts friends who were equally baffled. I could have looked it up, but, frankly, it was pretty fun to imagine what rank a camo belt would be. A special awesome rank? A rank you only get on your birthday? A sponsored by John Deere rank? 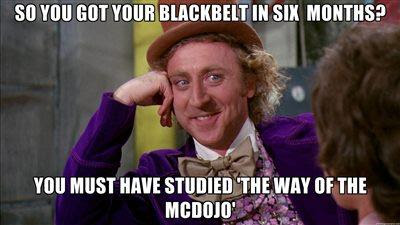 My personal theory is that it's post black belt. Usually you get stripes or degrees on your black belt but maybe a camo belt is, like, a special ninja rank. At some point the student is so amazing they blend into the shadows and nature like a specter in the night. So, camo belt!

The reality is so much more disappointing and I wish I never found out what it really is. A dad called me this week to ask about aikido lessons for his son. He was super nice and mentioned that his son was almost a camo belt at his old martial arts school. I made the mistake of asking him what the camo belt is. Apparently, it's after yellow belt which is usually the second rank in martial arts, the one you get right after your white belt. I AM SO DISAPPOINTED.

The dad had never seen a camo belt either and didn't really know why it was a part of the curriculum now. We talked a bit in aikido about it and one student had a good idea, that maybe it replaced the green belt? I thought that made sense. Too much sense, though, it appears, because the camo belt is in addition to the green belt. Alas, another instructor friend was probably right and it's an extra belt for extra testing fees for the school.

I found out that it's an extra rank this morning what I googled camo belt. I thought that maybe it was a Southern thing because, really, down here there is a LOT of camo, especially when you get outside the city. But it's an American thing because I found a list of ranks on the American Taekwondo Association site. And camo is RIGHT THERE. I'm going to take a guess here and say that Korean TKD probably doesn't have a camo belt.

But, hey, it's not something I'm going to do and I would likely steer clear of camo belt schools but if it's your thing, have fun with it! Wear your camo proud! In the meantime, instead of my hakama, I'm going to start wearing a camo gi.

Posted by Sharaze Colley at 7:48 AM