Holiday fun...now back to the grind!

And we're back! I'm feeling slow to return to normal so I thought I'd show you guys some funny pictures from our trip to the beach. We considered taking Autumn somewhere mountainy buuuuut since we're still saving a little toward the adoption and it looks like our 13 year old Saturn is in its death throes, to the beach with Mike's parents we go! :D It was a good trip although we only got a couple of good beach days. It rained a lot and there was an incursion of jelly fish a couple of days. Mike, Autumn, and I went jelly fish hunting with some nets and shovels. This little guy got past Mike and swept up by the chair where I was reading. I'm glad Autumn spotted him before I got a nasty surprise! 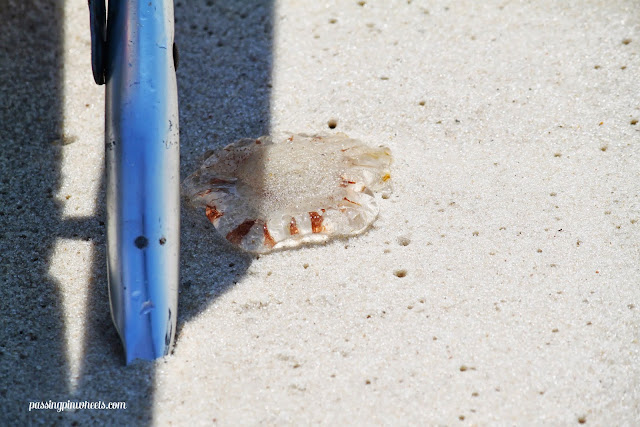 Lack of swimming because of jelly fish made this face. I love this lip so much. She's also wearing my hat. The funny thing? Two of the days we went to the beach, the indoor pool was all crazy so Autumn didn't get to practice as much as we were hoping. Someone mixed up the controls and the pool was ONE HUNDRED DEGREES. I don't even want to think about how much it cost to heat the pool to hot tub temps! 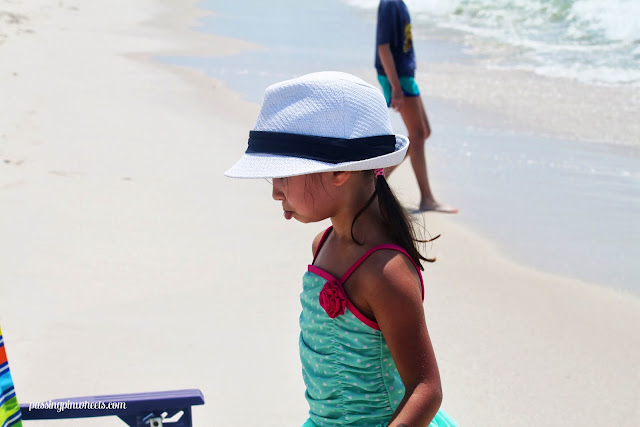 Once Autumn realized I was taking pictures of her sad face, she did this. Ha! 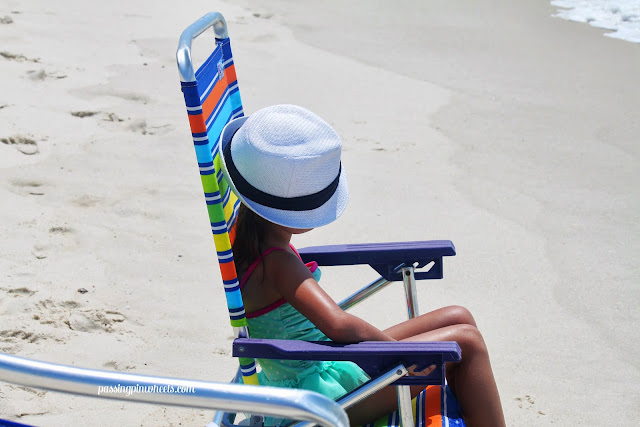 We did things other than the beach. One rainy day we went to the Naval Aviation museum. That was interesting for one, because Autumn doesn't really comprehend war...I mean, who does, but some of our talks were tough. And two, we had to explain to Autumn why there were almost no women in the museum. She knows that women haven't always been allowed to be warriors because of talks we had about the movie Mulan but I think it was really odd for her to see nothing but men (except for a tiny kiosk on Women in Aviation) in real life.

There's also a small amusement park that has little kid go-karts and other games for the littles. We've gone there for over a year now and every time we go, I try to talk Mike into doing the Sky Coaster: "Freefall from up to 110 feet at speeds of up to 70 mph." He always said no but this time HE TOTALLY DID IT WITH ME! Best picture ever: 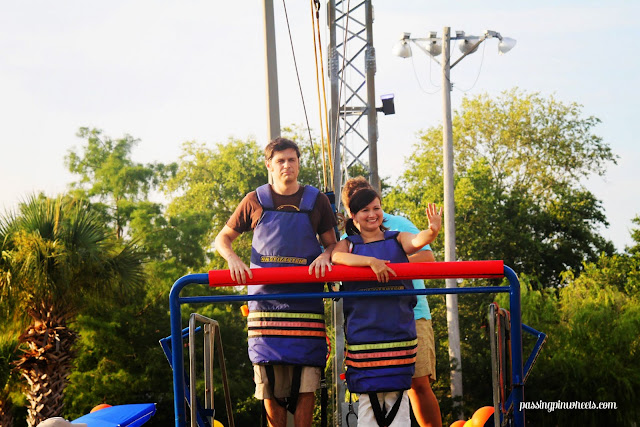 That picture is probably a good illustration about our personalities and our approaches to new things. Me: Yay! Mike: Mmmmm. I was excited until we started getting close to the top. Then I told Mike, "I am beginning to have regrets." The first drop and the first zero gravity moment at the other end of the swing over were the worst but after that it was too fun! 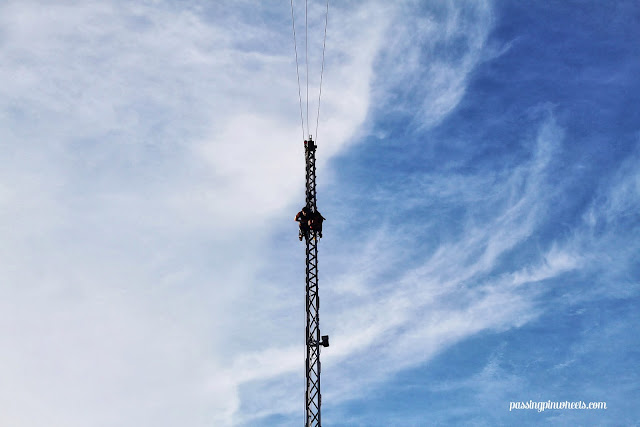 Poor Autumn...she was very, very worried. She leaned against the fence, completely boneless, the epitome of dejection. I didn't really think about how she'd feel about us going and I felt kind of bad but after we finished, we talked about it and she said maybe when she's bigger she'll do it with me! We did, as we were flying over her, yell "HEY, AUTUMN!!" Lainey thought we were hilarious but worse things happened during the flyover while we were there. An, um, rubenesque woman in a red mini dress did the sky coaster. And, yup, her underpants matched. She yelled out, "sorry for the underwear!" as she swung by... 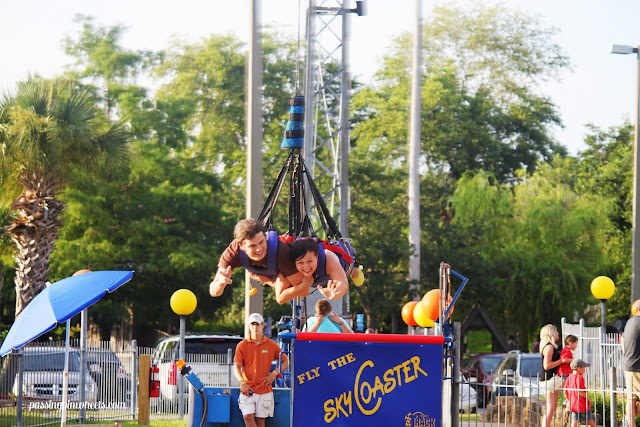 We also went to a fireworks display. Autumn's first time! In the past she's been a little too sensitive to noise to do it and I am so glad we waited. Because rather than being terrified and in pain from the noises, she oohed and aaahed and was just plain awesome. She even choreographed a flag dance and performed it to the fireworks. This was the first time I got decent fireworks pictures! I'm super happy. I really liked this one because the red and blue-lit palm trees are there in the foreground. 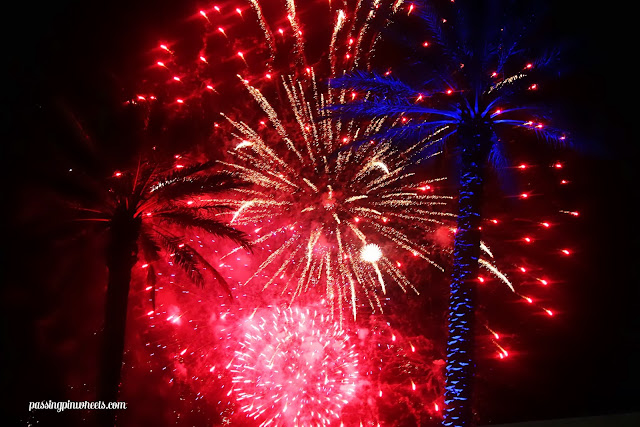 Back at the condo, we broke out the super-long, neon sparklers P'd picked up. I was so excited because I was the one who asked if we could do sparklers, another Autumn first! We had so much fun. Next year I want to get two packs! 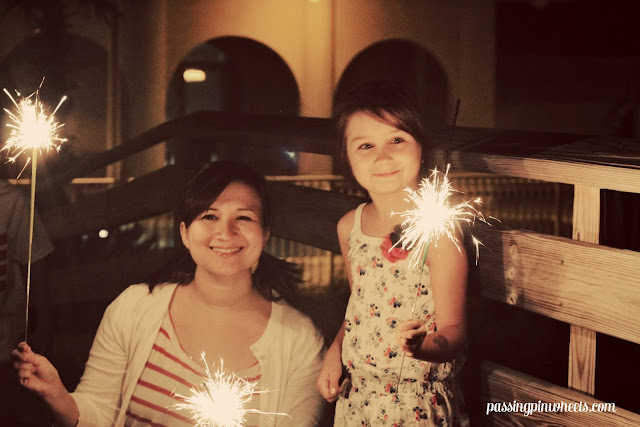 I hope all of our friends in the US had a great holiday and returning to work today wasn't too painful!
Posted by Sharaze Colley at 7:49 PM