WHAT DO I DOOOOO


I DON'T HAVE A COMPUTER WHAT DO I DOOOOO.

Saturday, after months of trying to talk Mike into it, he agreed to do Looking for Raid in Warcraft with me, my brother, and his wife. I was sooooo excited because it meant we'd get to see more of the game's story plus...fun! I turned on my computer and it went "whiiiRRRR" and cut off. I thought, "well, maybe it was already on and I just shut it down." Pushed the button again. "whiiiiRRR" and then silence. "MIIIIKE, I NEED HELP."

Turns out it's the power supply. And Mike had to order one. So, I am computerless and photoless until, like Wednesday.

Sigh. It's really not the end of the world even though blogging is hard without my computer and I can't really work on my fitness resume which I was hoping to send out this week. Penny and I went out to my mom's on Friday and picked up some furniture she gave to us because she's moving. Penny and I were very proud of ourselves because we loaded her husband's truck with a loveseat, two end tables, a coffee table and a kitchen cart and then unloaded it, too! So, I need to get all that arranged and the coffee table needs to be put back together. I also want to get some things up on the wall in the living room. It's so crazy...after 3 years we now have a fully furnished house!!

I also made a blanket storage trunk out of an old, tweed suitcase. :D It was fun! I need to finish that up, too. I would have done it yesterday, but in addition to not having a computer, our power was out all day. I still haven't discovered what happened but I'm glad it's fixed. Our cove was the last place to get electricity back! We had plans to go over to Mike's parents' for lunch so we just stayed over there for the afternoon and evening. Autumn swam with P'd. I read an entire book. Mike brought a laptop he was working on and did that. I don't get bored much but by the end of a day without any projects or chores, I was going stir crazy! I ended up entertaining myself this way: 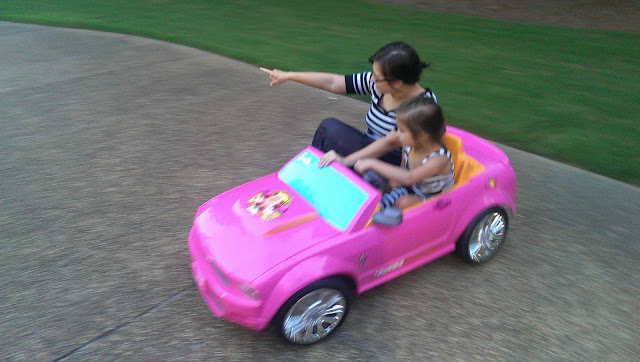 Ha! Until next time!
Posted by Sharaze Colley at 7:52 AM