12 years and almost 200,000 miles ago, Mike did a small mountain of research and looking at cars to help me find a used car that was safe, reliable, and in my price range. It was crazy because, at that point, we weren't even engaged. The sales people were in awe of his dedication and all like, "seriously, don't let him go." And, of course, I didn't.


The Saturn has been a great car but lately it's feeling its age. When a friend of ours got a car recently and we heard how low her finance rate was, we started talking about whether or not it was time to replace Old Faithful (except for the time when the transmission died but that was just once). And, if so, with what. It really came down to two things: we could wait until the Saturn died which could be tomorrow or next year or we could go ahead and find the "perfect car" without the "emergency" of only having one car when Mike works 40 minutes away and I am a traveling teacher. We decided to go with the latter since the interest rates are ridiculously low and there is no way we can raise the cash to buy a car outright which is what we did when we got our Sonata.


I'm not sure if we give the impression here but if you ask any of our friends, they will all agree that Mike and I are cheap. We pay cash for everything. We rarely go out to eat. Almost all of our furniture was given to us. We DIY when we can. Extra-curricular activities for Autumn and our car repairs are done in trade. And since the adoption saving started, we haven't had a vacation that wasn't tagging along with Mike's parents! So deciding to go into debt for the first time in our marriage was a big deal.

Mike went on a researching binge. He was in Consumer Reports heaven. Of course, he drove me insane but I told him that even though all the numbers and calculations and car review videos were going to make me batty, I was thankful he was good at and enjoyed doing that kind of thing. BECAUSE I DON'T.


It was funny because when we decided to test drive hatchbacks, I carried my aikido weapons and teaching box with me to put into the car. Hahaha. The sales people did some serious side-eying but admitted it was a good idea. One hatchback got completely ruled out because my jo wouldn't even fit into the back, no matter how we tried to get it in. We drove a couple of hatchbacks we loved but with another child coming one day and this car potentially taking us through 10 to 15 years of driving and kids sports and teaching, we decided that the hatchback was too small. More test driving, weapon carrying, and research later, we narrowed it down to a Honda CR-V.

More weeks passed and we found three potential cars. Mike did all the negotiating on the phone and a dealership in Jackson, Tennessee, won the who will go the lowest war, and an hour later we were test driving a ridiculously well maintained 2011 CRV with 20,000 miles on it. The entire experience was almost anti-climactic after all the research and test driving!!

The sales people were fabulous at this dealership. The finance guy tried to give us a run around--claiming to have beat our credit union rate but going over it by 1 percent, trying to tag us with an extra $2k warranty when the car already came with a warranty, trying to get us to sign a paper with the wrong numbers...seriously, it was crazy! But, it all turned out fine and check it out: 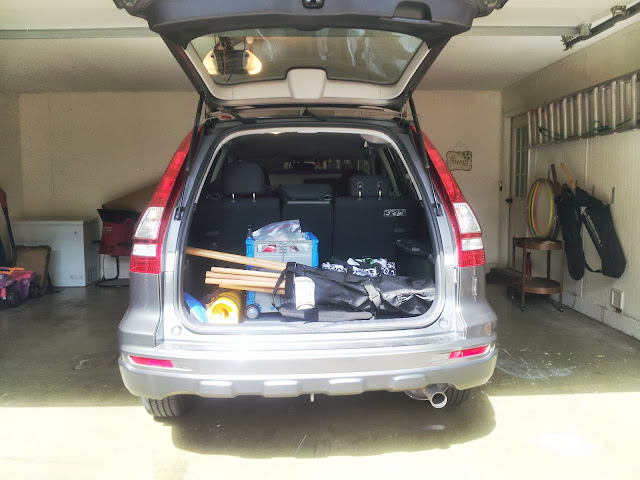 All my teaching equipment fits nicely! No hefting it in and out of a trunk, no taking things out of the bag to fit it in like puzzle pieces. Hey, first world problems but it's nice! The good news is, I counted up how much we have left to save on the adoption. It's a lot. But at the rate we're saving, by this time next year, I'll be able to throw the car payment PLUS what we're saving for the adoption at the car note. And the once that's done? We can rebuild our emergency fund.

We did a lot of praying for wisdom when we did this. We prayed and negotiated and talked money and good stewardship in front of Autumn, too, so she'd learn something even if she doesn't remember all the details. I was afraid that buying this car would feel like a millstone around our neck but Sunday when we were coming home from church, Mike and I agreed that it felt like we made a good decision here. It's not perfect but, considering all the imperfection in our life right now? I'll take a peaceful heart over a big decision!

And our old Saturn? We've had FOUR offers from people to buy it! Craziness!
Posted by Sharaze Colley at 7:17 PM