FINALLY: The Under the Sea Treasure Hunt Recap!

Well, today is Autumn's first day of first grade. Sigh. I figured today is as good as any to finally post the photos from her birthday party back in May!

We actually didn't have a very big party. Just family and a couple of friends. Making all of these printables to (eventually) post in the Etsy shop gave me an excuse to fancy it up anyway. :) I made a banner, drink jar labels, favor tags, treasure hunt clues, food tents, and treasure maps! Even though Autumn's friends are all boys, I didn't really want to do pirates and mermaids which I see people do a lot. So, I tried to make it fairly gender neutral in color but still do the mermaids with some other little sea items and sea creatures. The boys didn't seem to mind and Autumn was happy so I would say mission accomplished! 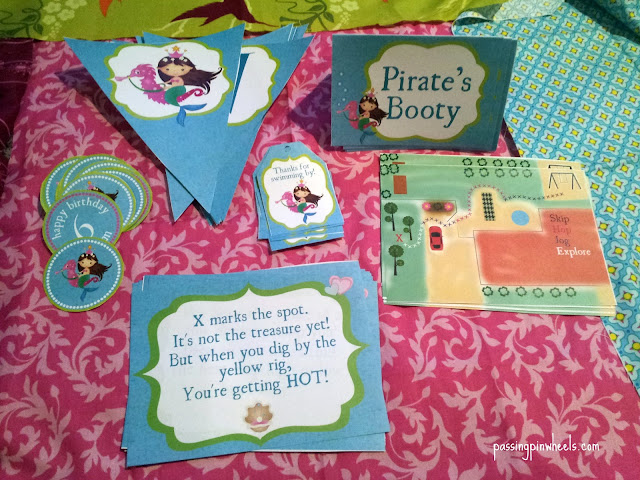 I was lazy and did blue Hawaiian punch as our ocean punch!! I loved these blue chevron straws

which I found on Amazon. Last time I bought these straws, they didn't have them there. I decided to get pretty straws at the last minute so I was really glad for the quick ship option (btw, if you want an amazon prime trial, click the banner in the right sidebar--you get a trial and we get a referral fee that we'll put towards our adoption costs!). Most of those jars are the same ones from Autumn's lemonade party, too. I included those rainbow cups hiding in the back for any littles who didn't need to be carrying around glass jars! 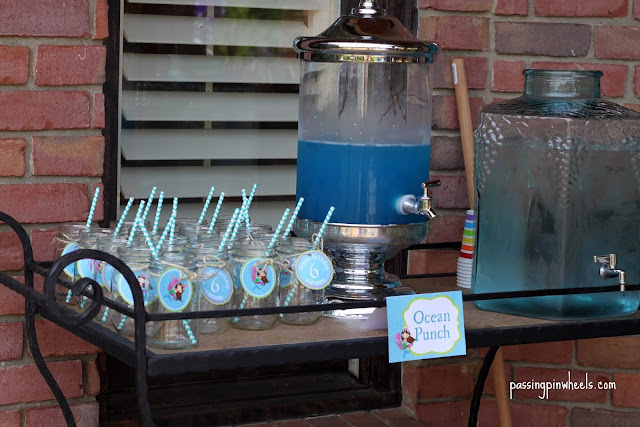 Of course, we had to have pirate's booty! That stuff is addictive, for real. One funny thing, though, humidity does strange things to the texture of the puffs! Just a heads up for anyone planning to have these at an outdoor event. Next time I'll use a smaller basket and refill more frequently rather than dumping it all into a huge basket. 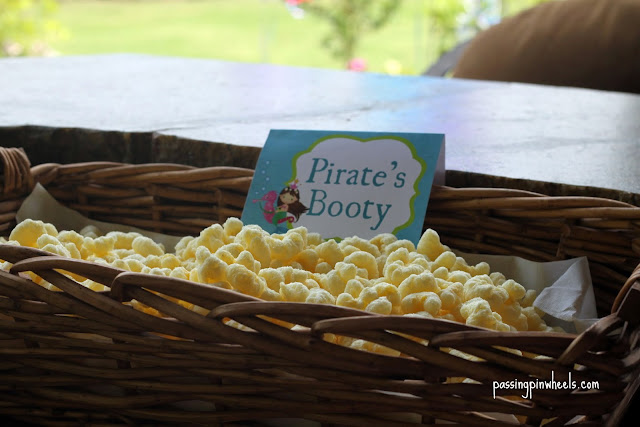 Penny and Elyse put together the fruit trays and did a way cuter job of it than I would have! You can also see the other tent cards in the background. I had swedish fish and goldfish out. We also served hot dogs. 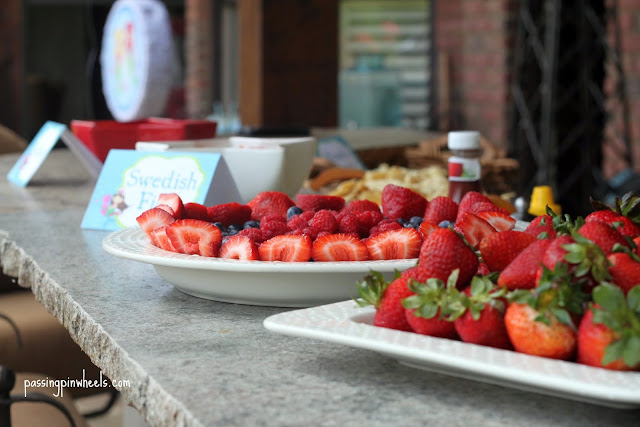 I really wanted round balloons but that was one of those things I ended up not worrying too much about! I thought that the balloons looking like bubbles would be fun but not really worth the expense. I reused these balloons for Jackie's bachelorette party, hahaha. 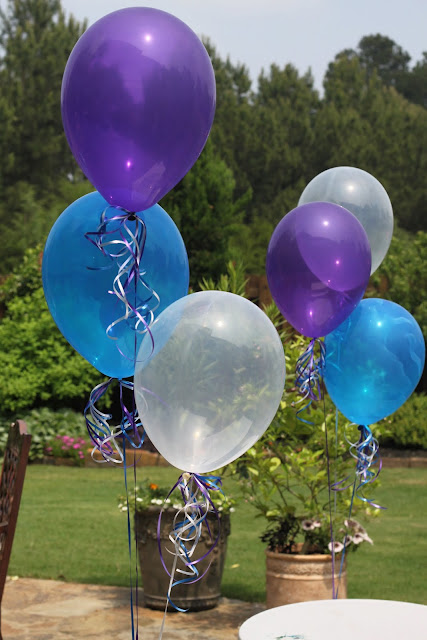 Linday has a cricut and she made vinyl names for the buckets I found for a dollar each at Michael's! We have a few buckets with names on them around the house and love them. They were collecting things along the way for the treasure hunt so the buckets were useful for the party and for home. Lainey brought Tyler and Hudson's buckets to the beach and Autumn uses hers here at the house. 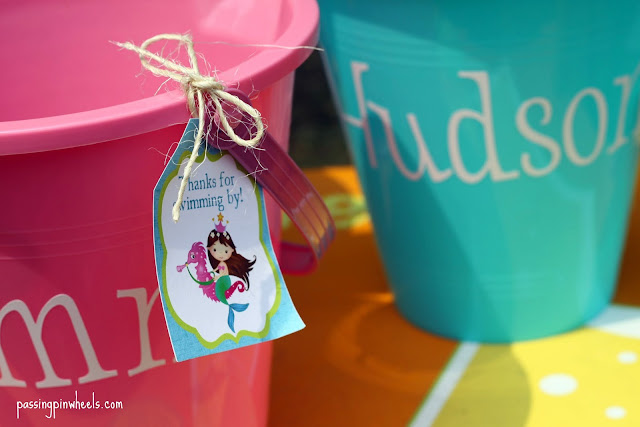 The banner! I guess this is going to be the banner place for parties at Lainey and Pd's house! It works really well to let people know that they should come in the backyard rather than to the front door. I used thick twine from another project to string the banner and to tie the drink labels to the jars. I thought it would look like rope or netting, which is another one of those things I really wish I could have justified buying for decoration! 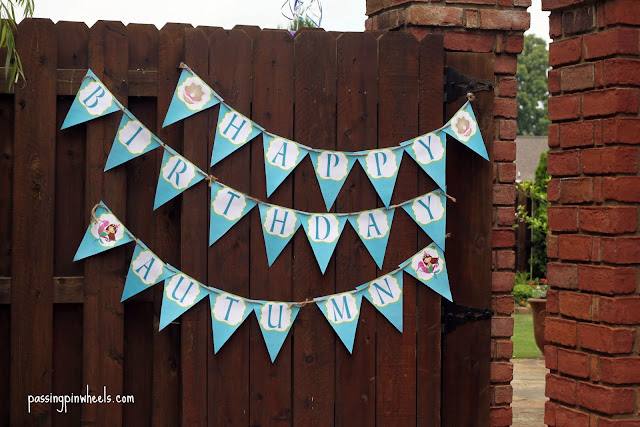 Here we are! You can also see the fun feather boa wreath I made and the mermaid pinata Lainey found online. On the other side, they have a brown haired mermaid and a black haired mermaid! 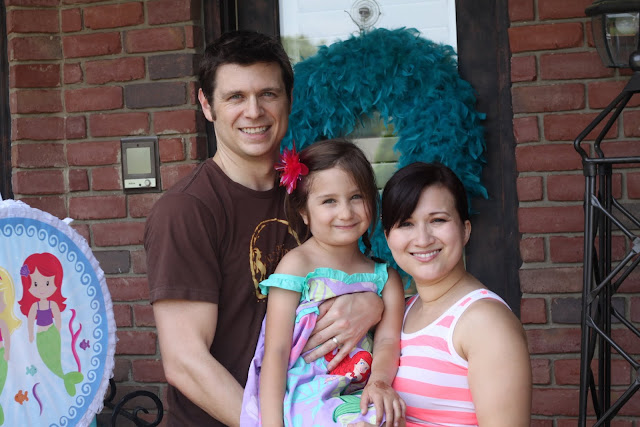 Ellie really didn't like her mermaid outfit. Her grumpy face is sooooo cuuuuuute! 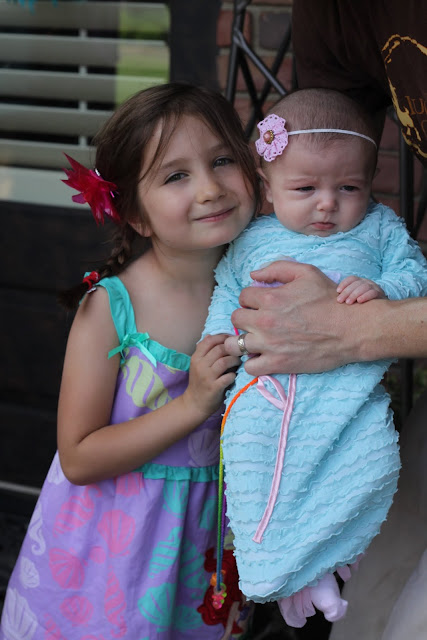 In the area where we opened presents, I put this photo of Autumn and a framed copy of the invitation which I had printed at Costco. I hung the picture of Autumn in our hallway with Mike's father's day frame. 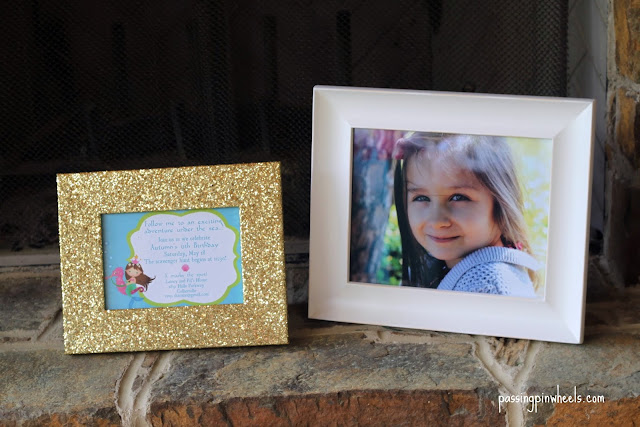 The pinata...poor Autumn didn't understand what I told her to do for some reason. She ended up ripping all but two of the pull tags out of the pinata! So Mike got one of my bokkens out of the trunk and the kids whacked the pinata samurai style!! The first clue was in the pinata along with the candy. 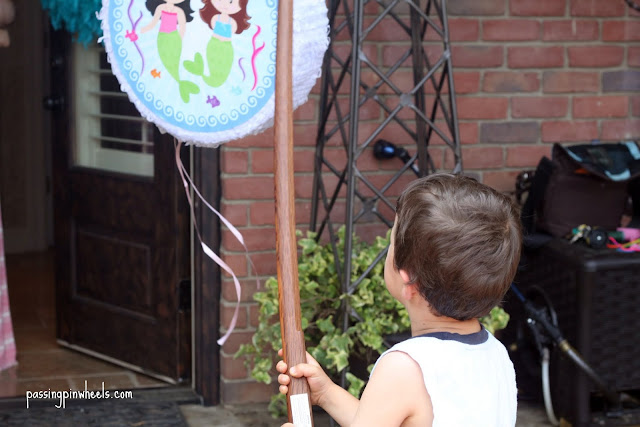 I didn't get a photo of the main table but I just took some deco mesh and spread it out and added a bunch of Autumn's mermaid and sea creature toys. I also put these little guys on the table because they were a party favor for the kids to take home. Underneath they found a treasure hunt clue. The owners of Collierville Arts have a daughter who is starting college this fall. She made a lot of stuffed animals and a couple of weeks before the party, the bigger sea creature caught Autumn's eye. I asked Katherine if she'd make some small sea creatures for Autumn's party and she did! I love how they turned out. 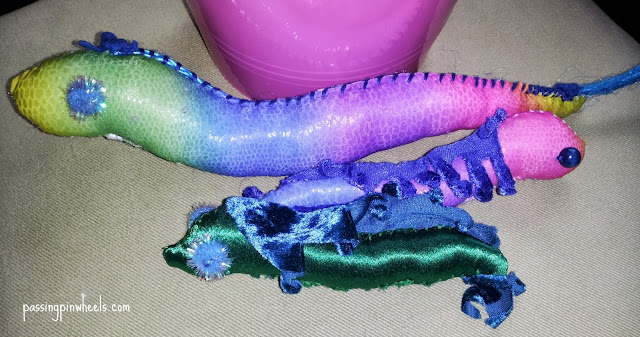 One of the clues. I tried to make them cute and rhymey...the kids did a great job reading the clues and only needed a little bit of help once or twice in solving the clues. 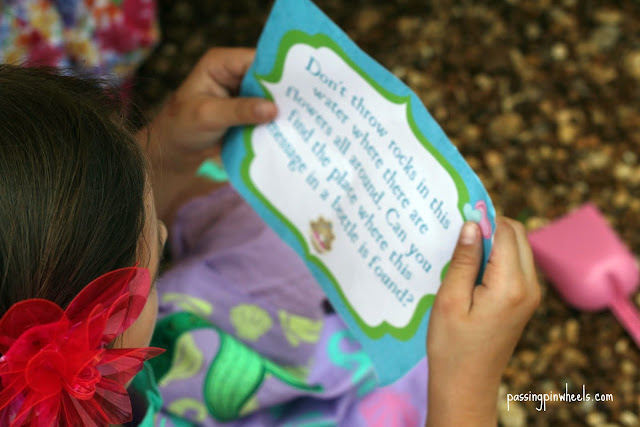 I totally cheaped out on the treasure chest! I took a styrofoam cooler and covered it in kraft paper. The straps are gold ribbon and the jewels are hot glued on. Autumn had a great time helping me make it and it's sturdy enough that we can use it for other things! 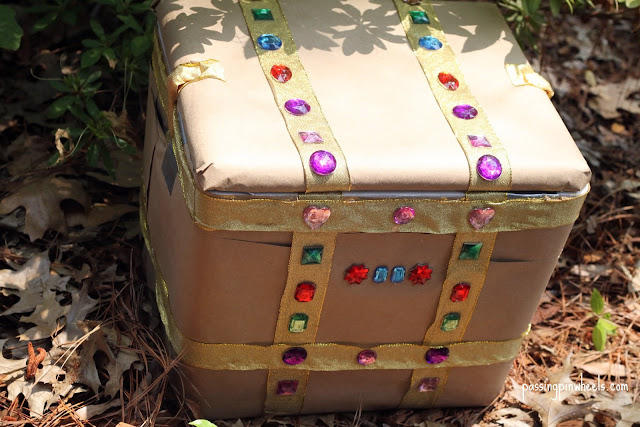 In this photo, you can see Micah holding the treasure map which I stuck on the back of these beach themed dry erase boards Penny found at Target. 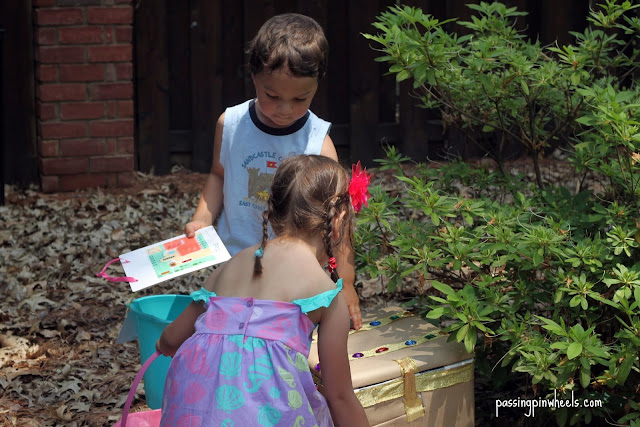 We buried a bag of treasures (necklaces, jewels, rings, and chocolate coins) in sand inside the chest. They used the shovels that came with the buckets to dig! 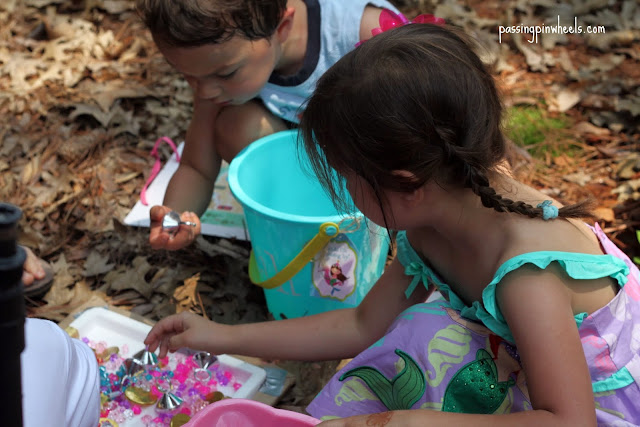 The Southaven Cake Lady made Autumn's cake again this year. She used the invitation to make this ridiculously awesome scene. I mean, I can't even draw much less draw in frosting!! I bought the clip art (and commercial license) on Etsy or there wouldn't have been a mermaid at all! 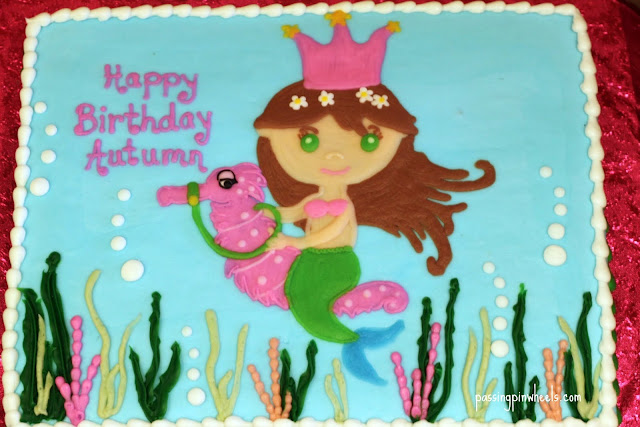 I used these sparkling candles I found at the grocery store. They are really cute and fit nicely on the cake BUT they worked like trick candles! All the huffing and puffing Autumn (and Liana) could muster and they still blew out and came back several times. 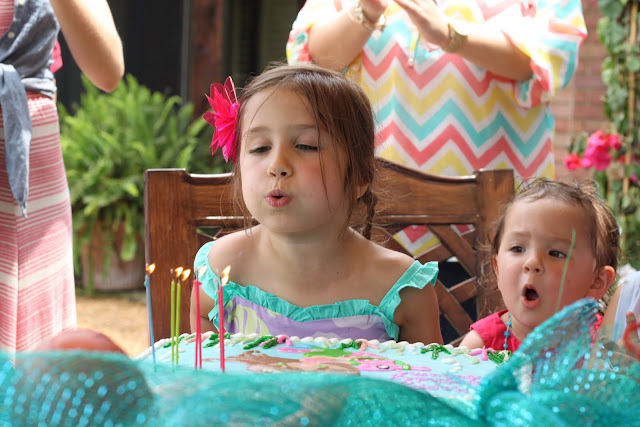 We had such a good time! The Under the Sea Treasure Hunt was definitely a success. It was, dare I say, a whale of a time! Ouch, that was really bad, ha! I got a crazy good deal on that whale. It's like $11 now but when I ordered it? Something like $5 AND we took it to the beach to use there! Too fun. 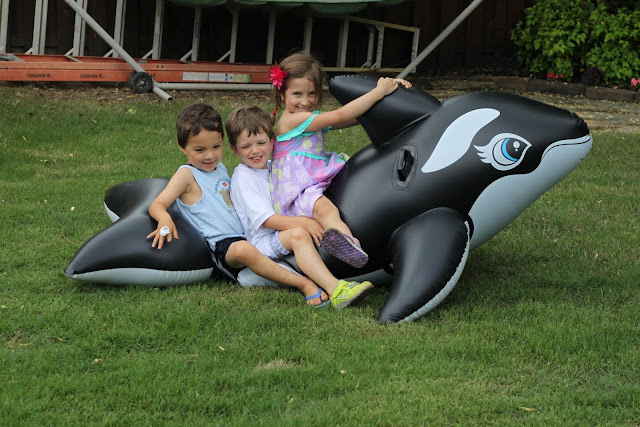 Linked on Made by You Monday at Skip to My Lou!
Posted by Sharaze Colley at 9:25 AM