Adventures in Suburbia, where the cars are weapons

Oh, my gosh, you guys I am cracking UP right now. I know this is such a suburban, first world problem but I have been so entertained this week by illegal parkers who have been giving me threatening looks and, now, trying to talk smack at me. And failing because really? 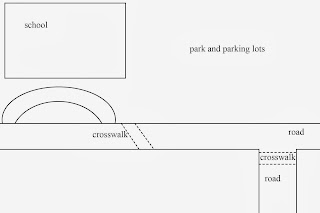 Parents around Autumn's school have always been dangerous, bad drivers. I absolutely cannot believe the risks people will take with their kids in their car and other kids walking around. I have almost been run down countless times. At least once a week I have also gotten thisclose to a car accident from parents not paying attention or who are driving like drunks on a beer run.

It got so bad last week that every day parents were on all the corners, in the crosswalk and, one day, in the street parking to wait for their kids. I sent a note to the police department asking if a patrol could come by and check it out because it's really tough to cross the street. I can't see around all those cars. I mean, I'm roughly the same size as the oldest kids at the school and I have almost gotten hit more than once. I can't imagine how it must be for the kindergarteners and first graders.

Well, Monday a patrol showed up but in the wrong spot. He was over past the circular drive. And, that day there was one of the largest SUVs on the market, lets call it the Land Yacht, on one side of the crosswalk. And, 4 feet away from the curb, another SUV sat in the other end of the crosswalk with cars wrapped around the corner.

As I crossed, I noticed a person was in the Land Yacht. I told her, politely, that it was tough to cross the street when she's parked in the crosswalk. She goes, "sorry" but not like she really was sorry. So, after threading my way through the cars, I went to the crossing guard, who is super kind, and asked her what I can do. She told me to talk to the officer who I hadn't seen at that point.

I basically told him what I just wrote and that I didn't know if it was illegal but it was certainly difficult to navigate. It took him a bit to work his way through the traffic and the crossing children, but he made it over to the Land Yacht before she made it out. I happened to walk by as he was giving her a warning. A bunch of the parents parked on the corners scattered like pigeons. I have no idea if they even had their kids or if they simply abandoned them. He then pulled in behind the woman parked in the middle of the street in the crosswalk and waited for her.

Unfortunately, the two moms now glare at me every time they see me because, OMG, they have to park two feet further back so the FIVE YEAR OLDS can cross the street safely. Frankly, I don't know how they know it was me because I have heard a couple of different dads talking to the principal and the crossing guards about how dangerous that one intersection is. But, the mom in the Land Yacht has been especially horrible, giving me the stink eye, roaring her engine when I walk by and she's doing the carpool line and, once, clipping the curb where I was standing and waiting for the crossing guard to signal me across. It's really very middle school.

I've been vaguely concerned that she might try to hurt me. I'm not worried about her hurting me so much as I'm worried about Autumn. All I need is an unhinged mom in a moving weapon! Plus, with my luck, she's Autumn's class's room mom...anyway, one of my friends asked me what I was going to do and where I was going to hide the body. But, I kind of picture it going down with me pinning her and calling the police. For some reason this isn't appealing because it feels like I'd get a lot of not great attention, haha.

Anyway, I'm sure it won't come to that but today I was walking back and stopped at the crosswalk across from the park because someone stopped to turn left into the carpool line. You're really not supposed to do that because you're cutting a ton of people off plus it takes forever.  The lady rolled down her windows and yelled, "I AM JUST TRYING TO TURN LEFT." Which, duh. And although it would have been nice if she had stopped behind the line, I don't care so I just shrugged and did my hands in an "I don't care" motion. And then I saw her dog. And then I saw the car make and model. It was the stink eye lady!

After waiting for some other cars to turn right, I started across behind her vehicle and she sticks her head out and is muttering at me. Finally, she goes, ARE YOU THE ONE WHO TALKED TO ME MONDAY??

And, because I am nowhere near civilized and enlightened yet, I made it worse. I said, "Does it matter? What are you planning to do?" I promise, I said it super politely. And then I kept on walking which means I didn't catch all of her smack talk before she ROARED away...just to stop short because she didn't make it into the carpool line. I guess I could have been more irritating to her. An old friend of mine took off her earrings and stilettos and almost pulled a lady out of her car for almost mowing them down once. Man, I love that story.

So, yeah. It appears that a crazy person with a dog and children and a vehicle that counts as an assault weapon is gunning for me. If I never post again, you know what happened. If she gets out of her car, I can almost certainly take her. But I don't think anyone's winning against a Land Yacht!

ps, I'm not really planning to take her out. I'm pretty much going to stay in crowds from now on. I'm also going to meet Autumn closer to where I usually meet her after school just to be safe.
Posted by Sharaze Colley at 7:51 AM