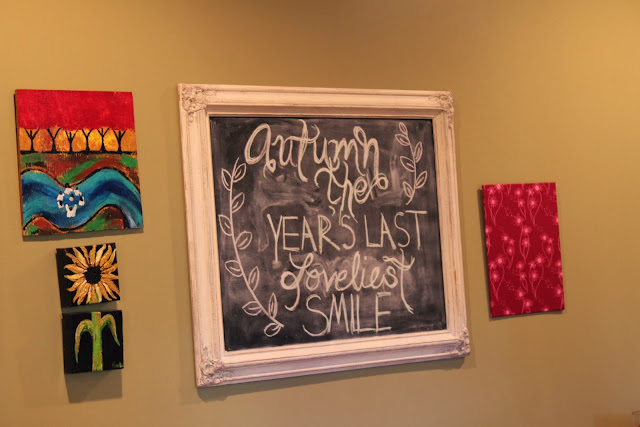 Autumn gets really excited about autumn at our house, haha. Because my birthday is in September, I have some seasonal decoration that my mom has given me the last couple of years. Some day, I'd love to do more for Halloween which is one of my favorite holidays. Candy, costumes, decorations, parties, no winter holiday family drama...what's not to love?? I'm still using the chalkboard I made last year. I'm not really any better at fancy writing but I got tired of drawing and erasing and decided to go with this. I have some regrets about the alignments and the word "the" but I'm so not starting over! 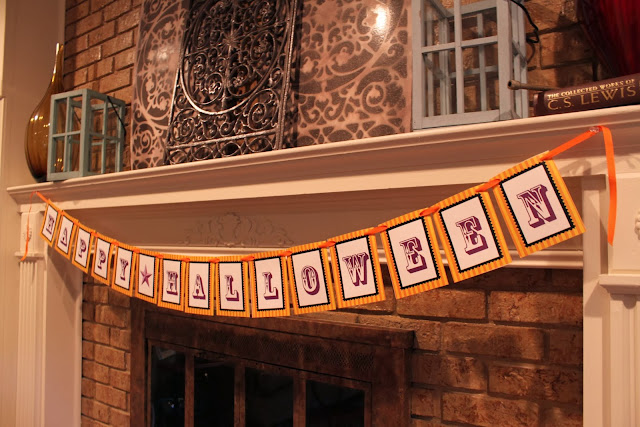 I completely forgot to list this banner. I made it last year intending to put it in my etsy shop but I didn't remember making it until I got our Halloween decorations out! (I decided to go ahead and list it!) We're having our second annual "Not a Party" where I'll have chili, cocoa, and maybe a dessert for anyone who wants to trick or treat with us. Even though I'm keeping in mind that it is *not* a party and I'm not going to go crazy I have to at least do a little, right?? 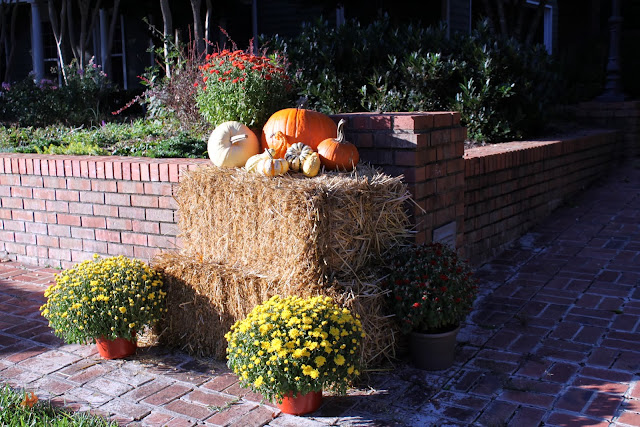 This is totally not me. Our House Fairy (ahem, Lainey) brought this over for Autumn. There was a sign on there that said "Autumn's Pumpkin Patch" but it rained so we took it down. I want to put contact paper around it so the sign can stay out in all weather. All we added were a couple pumpkins! 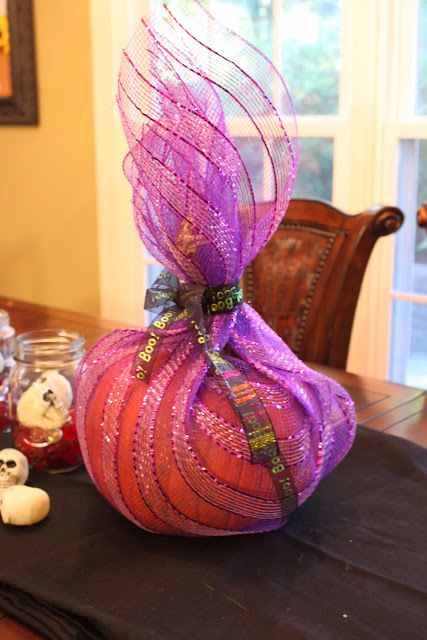 I wanted to do something Halloween-y but cheap on the breakfast room table. I saw a pumpkin wrapped in ribbon on Pinterest and decided to use some of the deco mesh from the belly dance party. I cut a length of mesh and used some Halloween ribbon to tie it together. I can use the pumpkins for Thanksgiving decor without the mesh later and then make pies! 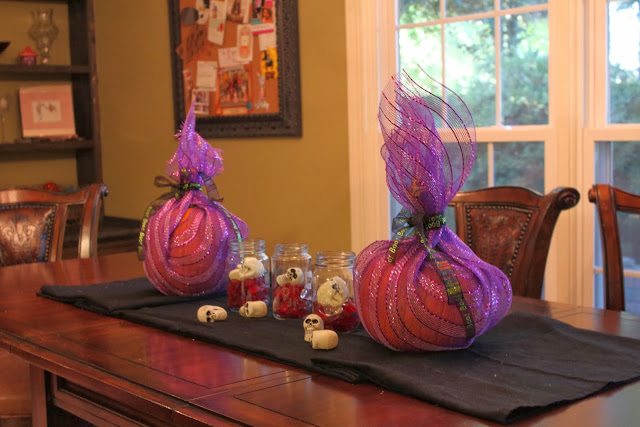 I had the skulls and black cloth from the Halloween housewarming party we did here the year we moved in. That was sooo much fun and I'd love to do another real Halloween party!! I think I put the skulls in a candy jar last year but this year I took some red rock bead things that go into a flower vase to fill a mason jar and then I stuck the skulls on top. I'm pretty happy with this! 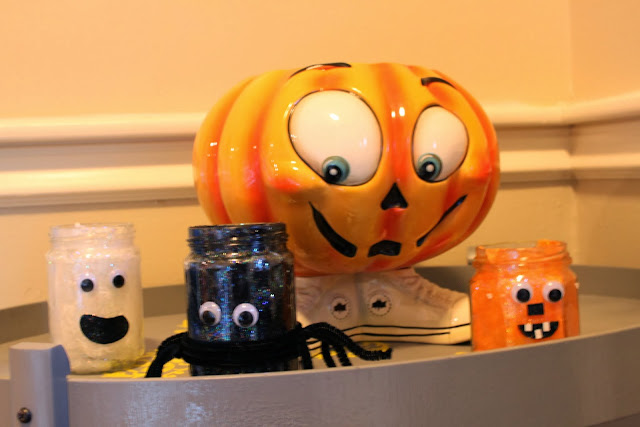 Now, this one we had so much fun with! I have saved almost all of our jars for projects and parties. Autumn and I decided to make decoupage Halloween lights.The item list is pretty easy and you can add more depending on what you want to make:
sparkle mod podge
foam brushes
assorted jars
tissue paper 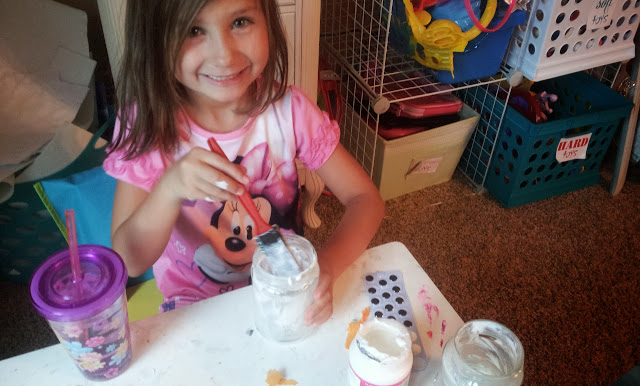 I could have mixed my own Sparkle Mod Podge

but I decided to go ahead and get a bottle since it was on sale. When I run out, I'll probably make my own and store it in the sparkle bottle. I bought an industrial pack of foam brushes for like $2.99 when I made Mike's map so we just used those. Autumn had a pretty easy time getting the inside of her jar coated.
. 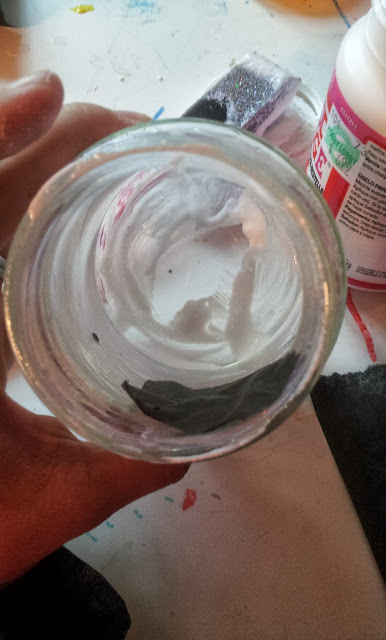 We tore pieces of tissue paper and filled the inside. I've seen people do the outside but I didn't really want to have to hold a glue-wet jar and then have my gluey hands make a mess of the tissue paper. Getting the paper to the bottom of the jar was a little tough but we solved the problem by using the handle end of a paintbrush. 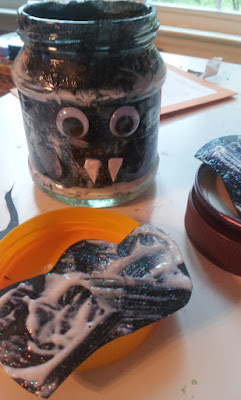 This is what it looked like before it dried and you can see the paintbrush I used to stuff the tissue paper at the bottom. We only had black, orange, and white paper so we did a bat, spider, ghost, and pumpkin. I wish we had green so we could make Frankenstein! I haven't put the bat wings on yet but I'm going to punch a hole in the wings and attach them using pipe cleaners. 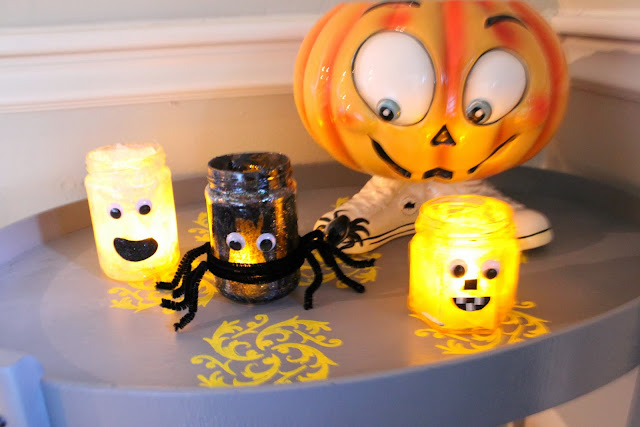 Here are the other three! I love that spider!! The ghost was a little hard because the tissue was the same color as the glue but Autumn did a great job with it anyway. And her pumpkin is adorable. I cut out the small pieces but she did everything else herself! By the way, that table/bar cart is one of the projects I need to post! 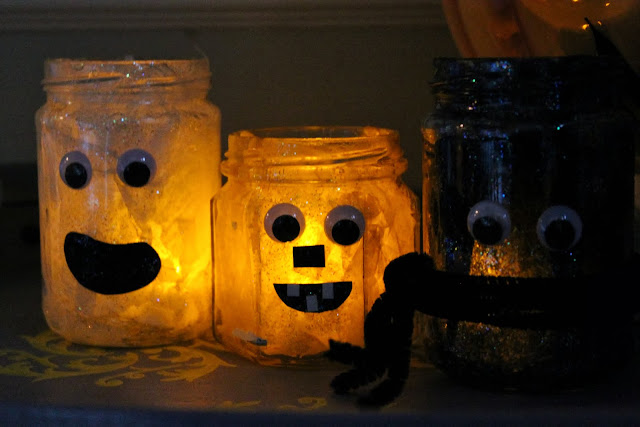 Of course, we pretty much have to use battery powered lights because of the tissue inside. We have the ones that flicker like real candles so these are so fun! Right now I have all of the jars with the candy bowl but if we have time to make more, we might hang them on the porch or in the trees! 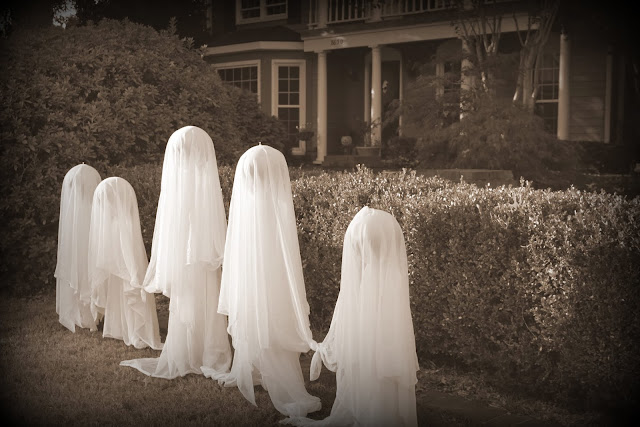 And that's our not-so-spooky house. Do you like our one spooky yard display? w(°ｏ°)w

submitted to made by you monday at Skip to My Lou!
Posted by Sharaze Colley at 4:57 PM