Lost for Words calendar plus a fitness pic! 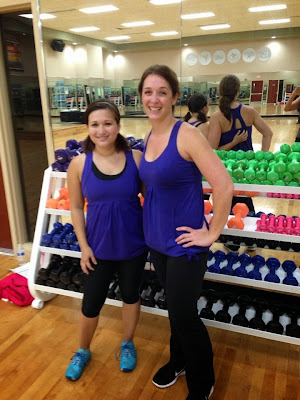 It is 9pm and I'm about to go to bed! It's been an exhausting week. I'm in the process of auditioning at a very large gym. I'm not sure I'm going to get the job but it's been fun and incredibly sore making to go to kickboxing classes all week. This is to prepare for a second audition. Since the first audition showed I'm capable of teaching, the second one is to see if I can make the adjustments the director suggested and if I can fit with their, er, "brand." We'll see! In the meantime, I'm enjoying the chance to learn from other kickboxing instructors. Last night I went to a combo turbokick/body bar class and our friend Melissa who attends classes at that gym came with me! AND, we were twinkies. This has never happened before, haha. I decided to post it here so you can see me in my instructor clothes. Plus it's a good picture and how often does THAT happen after a workout??

I haven't stopped doing Capture Your Grief but I just don't have anything to say or photograph on the subjects for a few of the days. I'll pick it back up on Day 19 or 20. Who knew there could be anything that I don't have something to say about? Honestly, it's mostly that I've talked about it already, most likely at length! 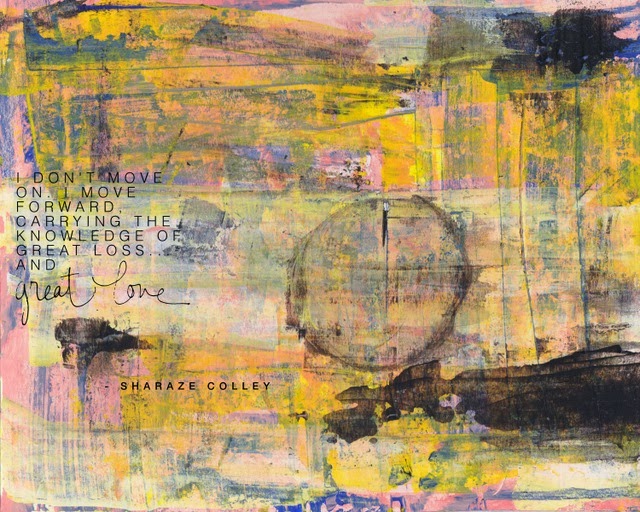 When Small Bird Studios and CarlyMarie Project Heal began accepting submissions for the Lost for Words calendars, I decided to send in one of my quotes. It says "I don't move on. I move forward, carrying the knowledge of great loss...and great love." I wrote the original version for the Day of Hope post and I have no idea why that stuck in my head or why I decided to go out on a limb and submit it but I do remember that I googled those sentences to make sure I didn't accidentally steal them, haha.

I never imagined the quote would be chosen. I also never imagined that it would have such beautiful art by Francesca Cox or that the month that I'd represent would be the month of Garrett's original due date. This is going on my wall for sure!
Posted by Sharaze Colley at 7:29 PM