I fully intended to write this post sooner but what I didn't count on was having to finish all of the things I didn't do while I was having fun over the weekend, haha. Not too bad. Just taking down our few Halloween decorations and packing them into the attic and sorting my piles of school work and aikido papers that have accumulated. Ah! It never ends.

Anyway, the Kang Rhee school a couple of towns over brought down Chuck Pippin of Innovative Martial Arts. He usually comes with Don Young but Don didn't make it this time. We're hoping that when Chuck comes back in the spring to visit our Aikido school, Don will be able to make it! Here's Chuck P. attempting to stab Chuck S. (who is my martial arts big brother and acupuncturist friend) during a demo. The friends who stab together are fab together?? Yeah, that was bad. 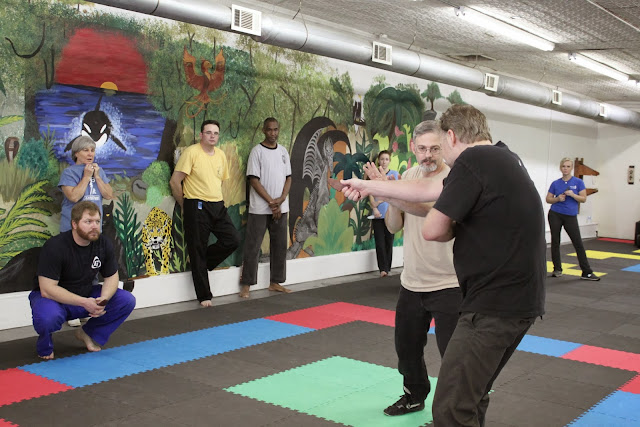 Patrick, who has been in Aikido for about a year and a half, came to the seminar and did really well, especially considering he's only seen this kind of material once in a seminar and on the occasions I can work it into a regular class. On Saturday we worked on knife disarms. I have always liked the Combat Training Concepts teaching methodology because it takes something ugly like knife work and breaks it down for people who have never picked up a knife much less tried to block one. And, even better, students are encouraged to take on the roles of coach and trainee depending on who is feeding the attack. I really believe this removes a lot of the ego and fear that martial arts and self defense training often brings out in students. 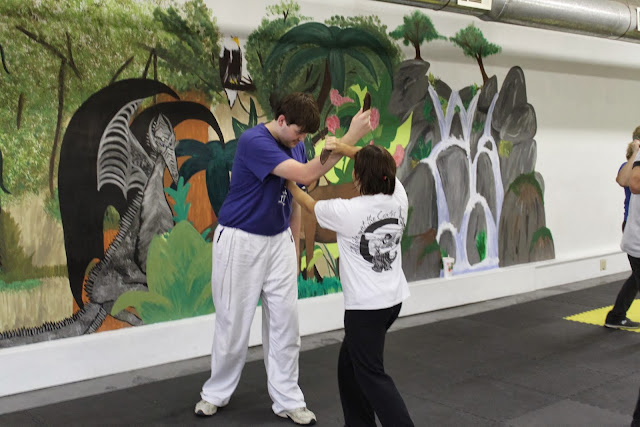 Sunday we had a significantly smaller crowd so we moved through the material pretty quickly since it was a refresher for most of us. It's funny, when we're doing these disarms, they happen pretty fast and hard so when I see the stopped motion in the photo, it kind of looks like we're just giving our weapons away! But it's really that we're getting yanked around, haha. 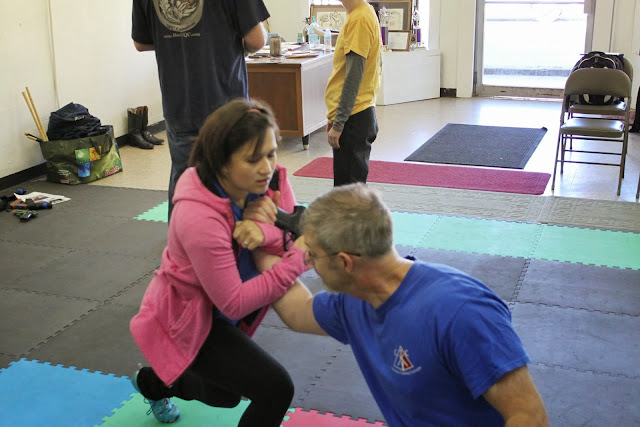 I had an odd assortment of bruises come Monday morning. It isn't that we're going hard. I've learned over the years to be moderate at seminars because otherwise I end up hurting and bruised for days. So this time it was mainly that most people would hit the same place on my arm every stinking time they blocked! Once, I paired up with Chuck S. and when I blocked him he said, "Oh, thank God. You're hitting a different part of my arm." I knew exactly what he meant. I tend to catch with the back of my arm out of habit from practicing with knives (less chance of bleeding out if that's cut) and unless I shear with my forearm, it's not too bad on my partners. Anyway, one of my weird bruises was on the front of my chest/shoulder when I held the fake machine gun. That's Matt, the same martial arts little brother who has drawn a number of pictures of Autumn! 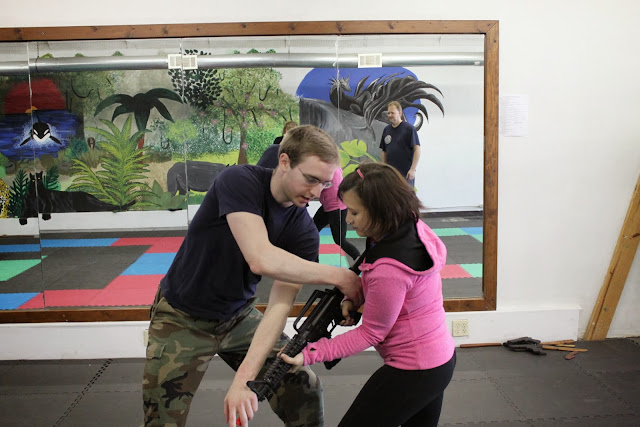 And, of course, I had to take my turn. This is one of those moments where it looks really cool in person but not so much in a picture! In motion, it's fun (and encouraging to new people) to watch someone my size tear a gun from someone Matt's size. But a photo still? He looks mildly irritated at my buzzing around, hahaha. 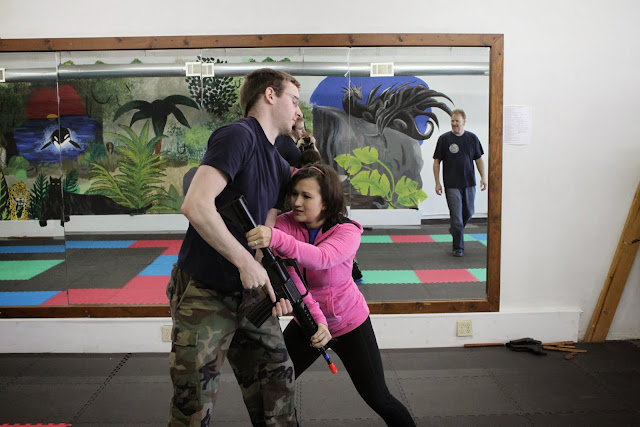 Tiredness plus too many movies plus fake guns equals Charlie's Angels Gender Bender, also featuring one of Chuck S.'s students Rob. I think I shall call them Sharaze's Angels. Speaking of movies and books and stuff, if I ever write a book, my heroine is going to attack the bad guys with a sock full of dimes. So random but it's one of the amusing things that will come up at a gathering such as this. 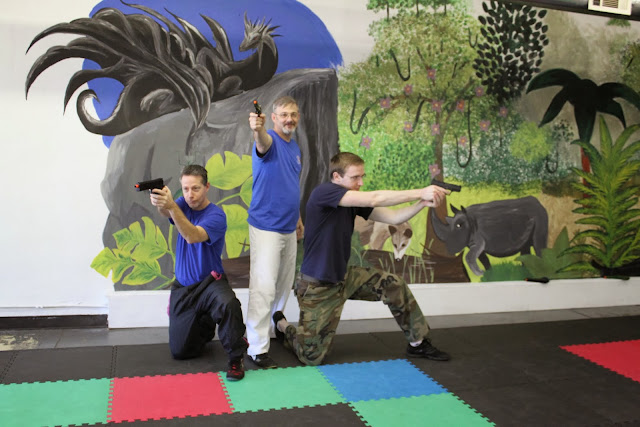 Now, doesn't that make you want to come do some martial arts with me?? YOU KNOW IT DOES. Oh, hey, I'll close out with this. Today our kids' Aikido classes were in the hallway because the church was preparing the room we usually train in on Thursdays for a craft fair this weekend. I didn't bother putting on a uniform or anything and after some rolls and a warm up, we rolled up the mats and headed to higher ceilings to do a little bokken (wooden sword) practice. I let the kids strike at me while I blocked. Emma my preschool assistant snapped this for me. I LOVE IT:

Posted by Sharaze Colley at 6:34 PM