The Colleys at Disney, Part 1

My first visit to Disney World was amazing and I would love to go again! Although Mike's dad originally told us about the trip over a year ago to give us time to save for our passes and make sure we had vacation time, Mike and I debated about the trip for the last few weeks. Things looked shaky for a little while because of Mike's work. We weren't sure he'd get to go at all because the company Mike works for is, to put it simply, splitting. This month the part of the company he is going with is moving onto a new (still under renovation!!) campus as well as severing various systems from the part that they sold. Mike's boss was great, though, and managed to finagle enough time for us to do a 3-day pass. The adoption was another potential issue because we didn't really want to be out of town for the baby's birth. But, we talked to Bethany and birth mom J and they all encouraged us to go. I'm glad we did--this was potentially our last trip with just the three of us.

I didn't say anything about it before we left mainly because I don't like to be all "HEY INTERNET I'M LEAVING TOWN" but also the less I talked about it the better. Tyler has been to Disney before but since it was Autumn's first time, we decided to make it a surprise that we'd present to them at Christmas. It worked out great. Because Christmas Eve is a work holiday for Mike's company, we went on down after my kickboxing class. A few family members were already there, including Brad who moved to Doha for work on January 2! More on that later. Christmas afternoon, the rest of the family arrived and after opening presents, the family started the kids on a scavenger hunt which led to Mickey hats and then the news that we were going! 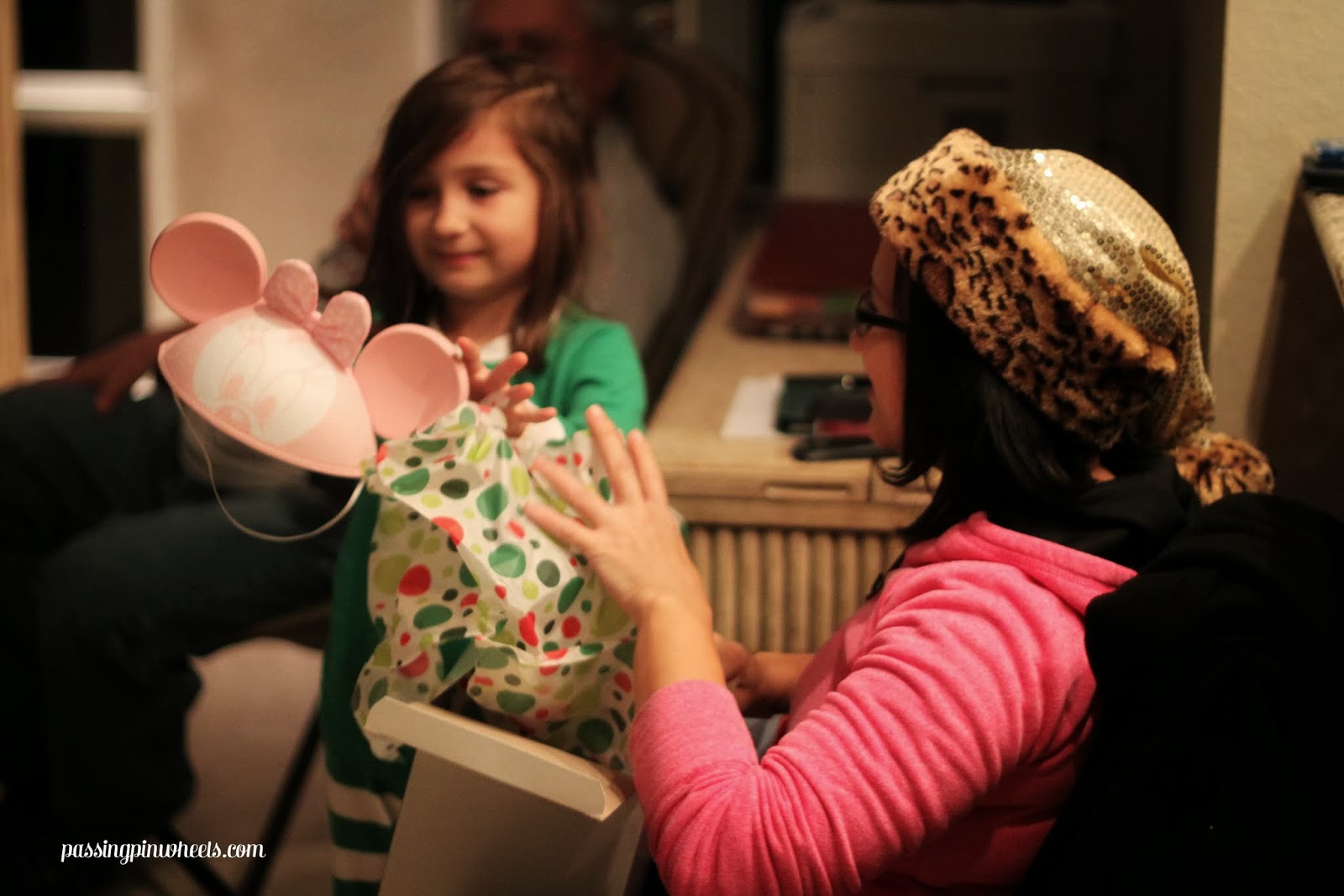 The funny thing is that Christmas morning, before Autumn knew where we were headed, we watched the Disney parades on TV. Autumn turned to me and said, "I never want to go there." I asked her why and she emphatically stated, "because there are too many people." I had to laugh. Interestingly enough, the very first thing we saw when we got to Magic Kingdom?? The same parade we saw on the Disney Channel!! Hahaha. 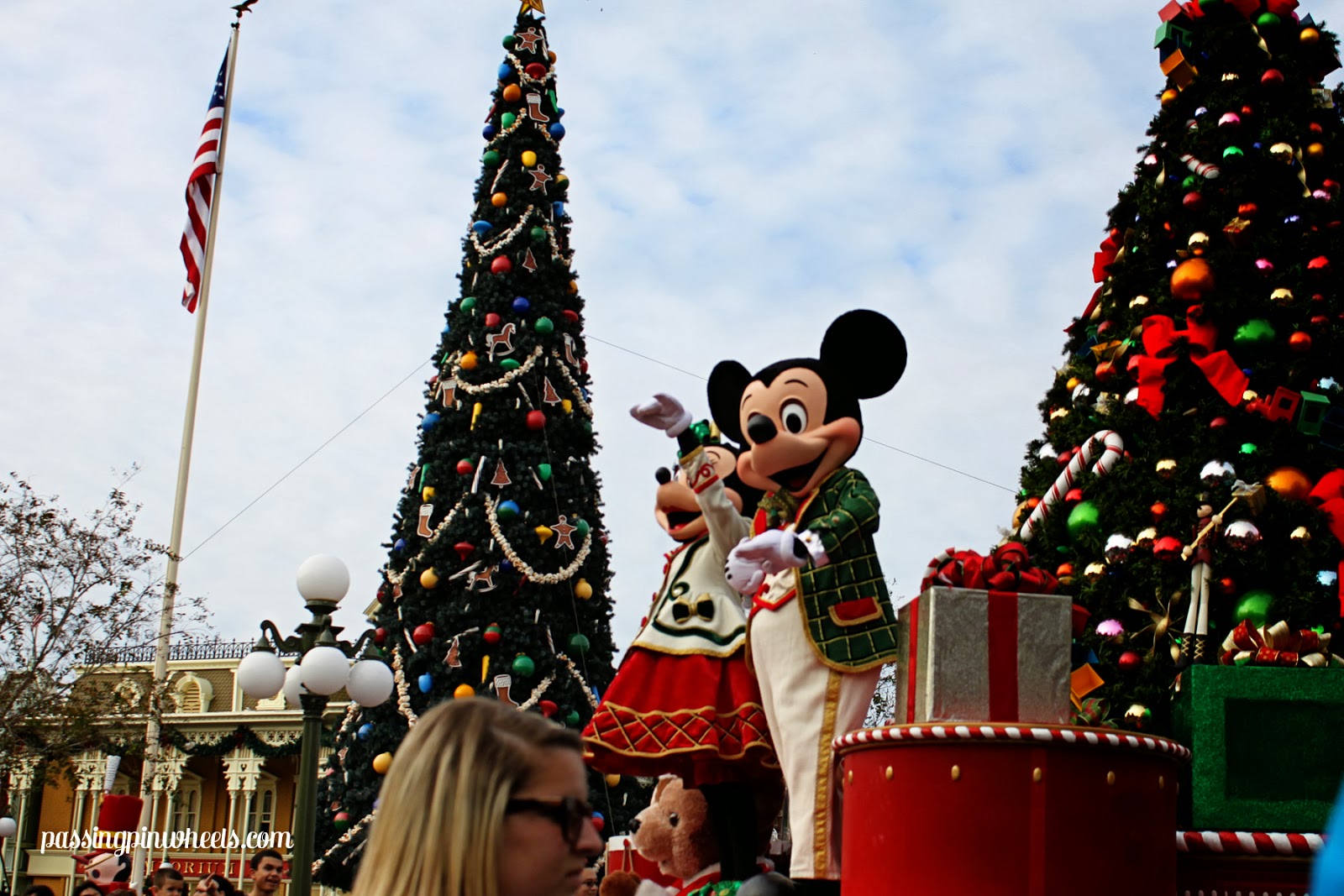 I brought ear muffs to help Autumn deal with the noise. She only needed them the first day and part of the second and then either she got used to it or she was having so much fun she didn't care about the noise anymore! That first day really was overwhelming. There were so many people and so many things to see. Mike's dad asked me what I thought, if it was what I expected. I didn't really know what to say except that it was more sprawling and less tall than I thought it would be. I guess I expected skyscrapers?? I have no idea. But Magic Kingdom is kind of kid sized. 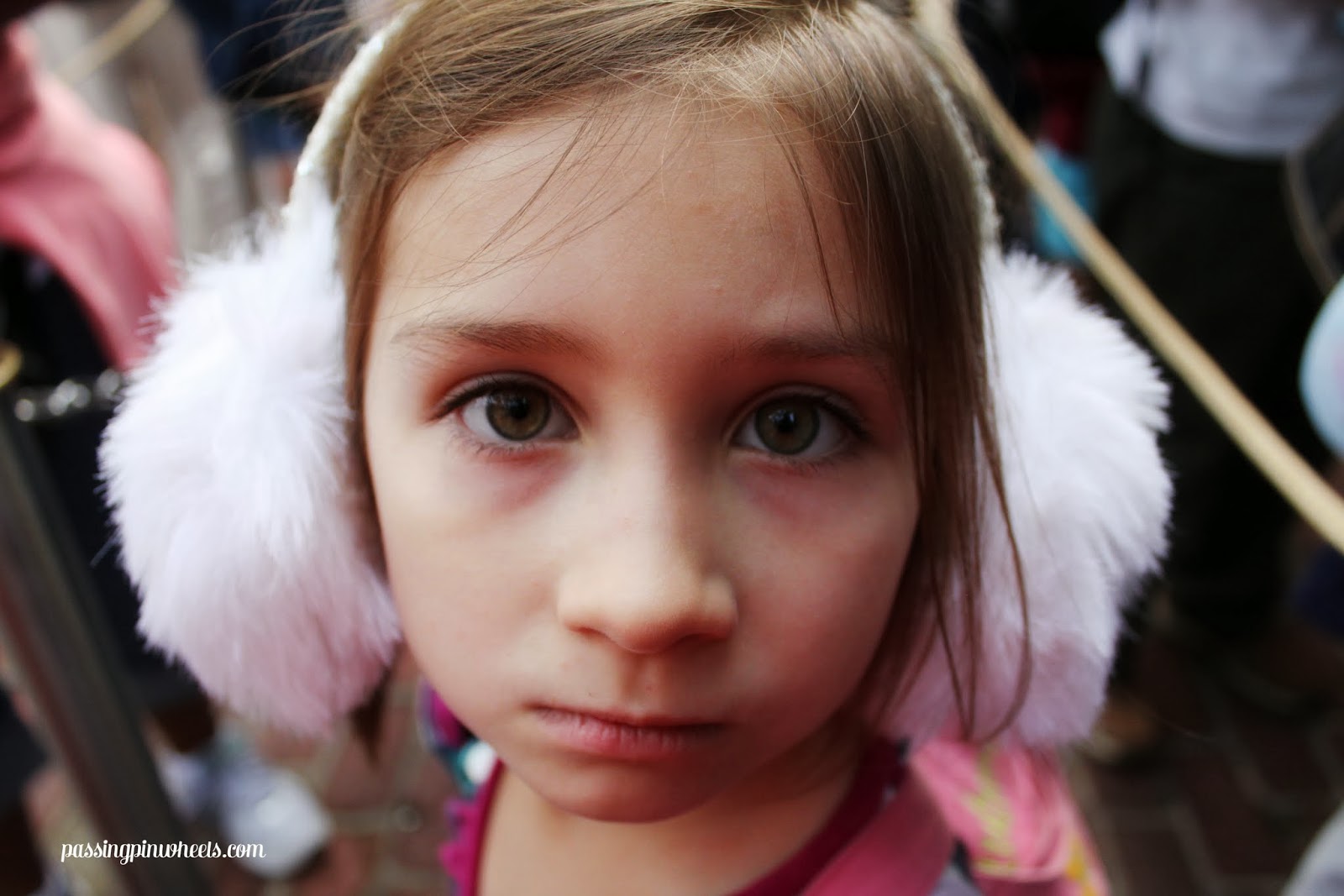 Because Mike had to be back at work on Monday the 30th, Pd, Mike, Autumn and I left the condo at 5am and drove on down to Orlando the day after Christmas. The rest of the family--and I mean everyone from little Ellie to Nanny and Boppa--arrived late that night and they stayed until the following Tuesday. The 4 of us checked out the house Pd had rented, dropped our stuff and went on to Magic kingdom. Mike and I had no plan about what we were going to do or anything because we just had no idea. The place is so huge! The parade was going on when we came in so we watch that and then explored a little. We decided to start by meeting Ariel in her grotto. That was a good choice. We were standing in line and a Disney cast member started asking about Pd's Alabama shirt. Turned out she was a fan and she took us out of the line to go through the fast pass entrance to see Ariel! It was great! The grotto was adorable and Ariel was sweet and fabulous at her job. 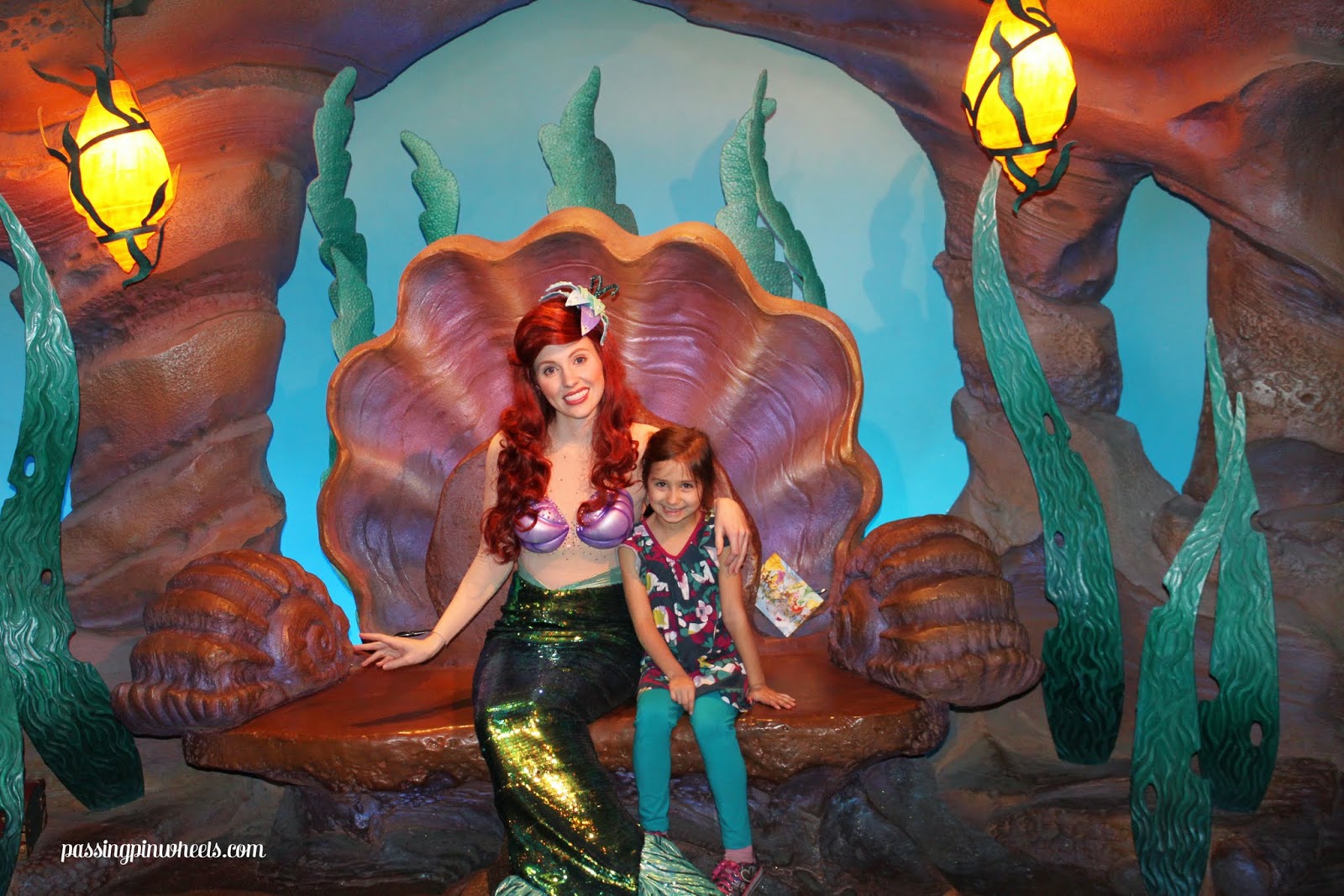 All of the princesses were impressive. And even their signatures were in character. Ariel's had bubbles, Merida's was blocky, and Aurora's very proper. Aurora was so wide-eyed and earnest that I got tired simply watching and decided right there that I could *never* work at Disney. Not that I look remotely like any of the characters. Except for Boo. After Monsters, Inc. came out, all these people were all, "you look like Boo!" I was 21. >.> 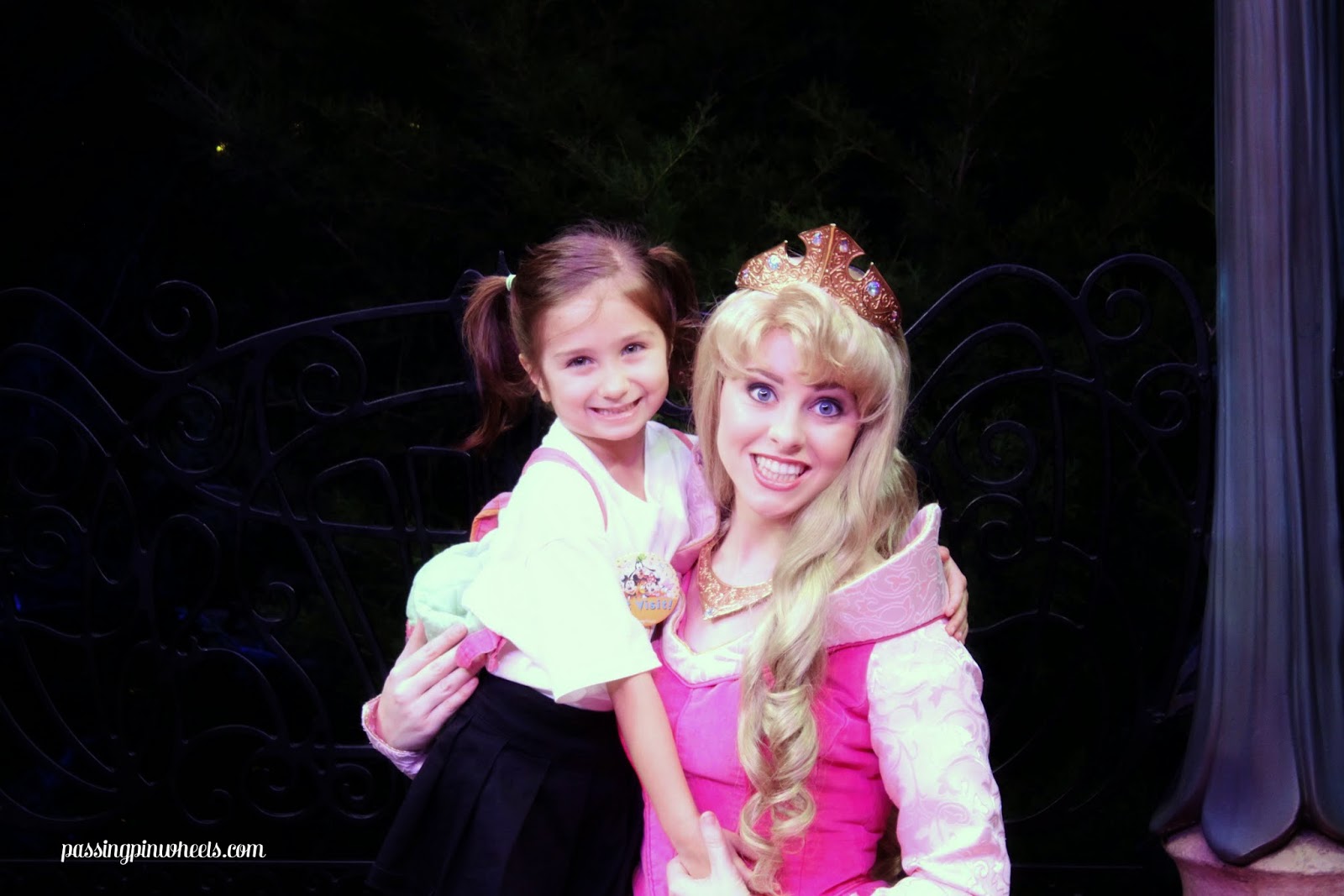 We took our rest break on the last day waiting in line for Merida. She was fun. Autumn couldn't understand her because of the accent which was hilarious. We also made friends in line and they told us about a great hotel they found that we'd seriously consider using if we ever have to do this totally on our own dime. 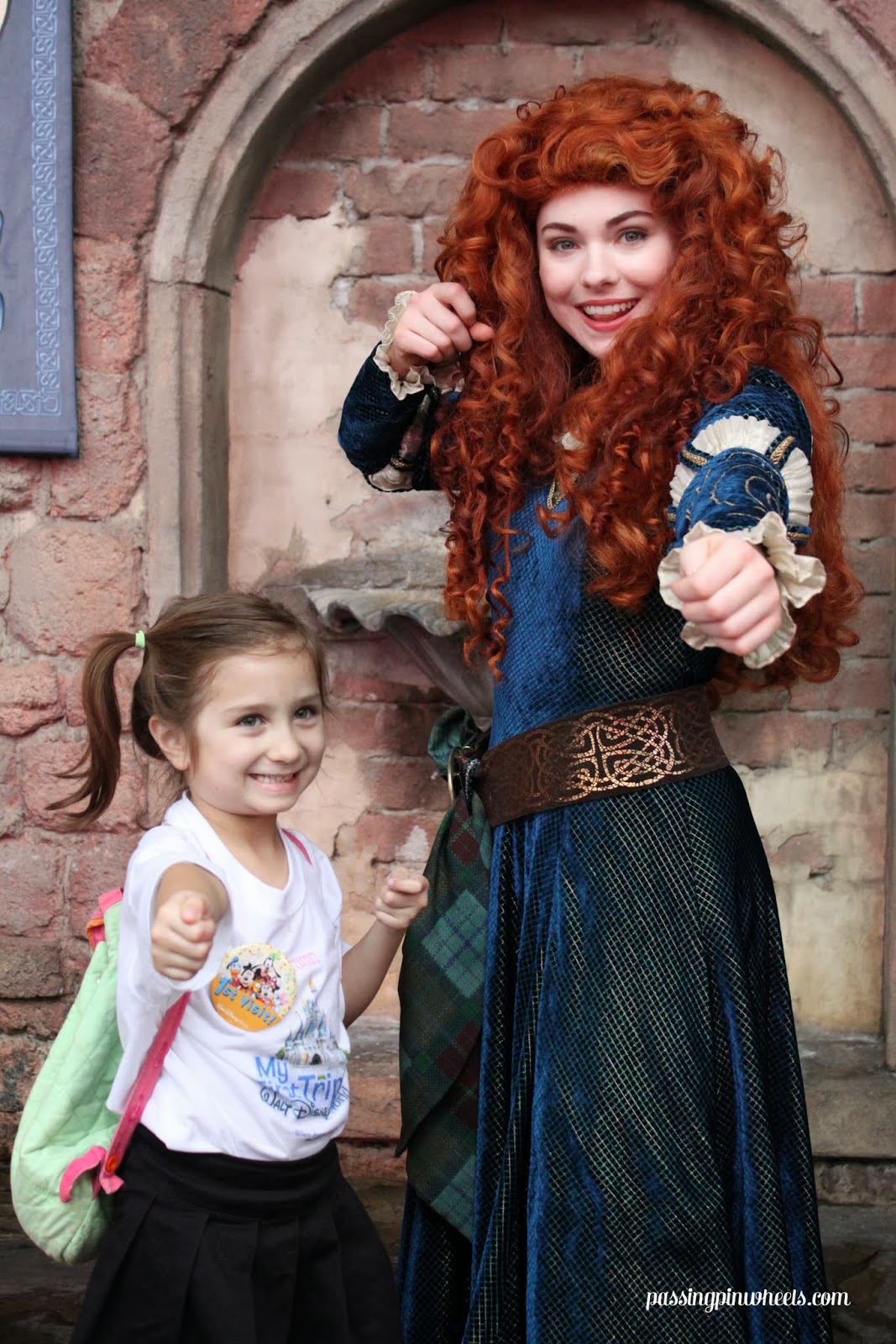 After meeting Merida, the kids each got to shoot an arrow. Autumn loved it. Penny gave us a Disney gift card for Christmas and I used part of it to get Autumn Merida's bow and arrow set. She's been shooting suction cup arrows at our playroom windows every day since we got home! 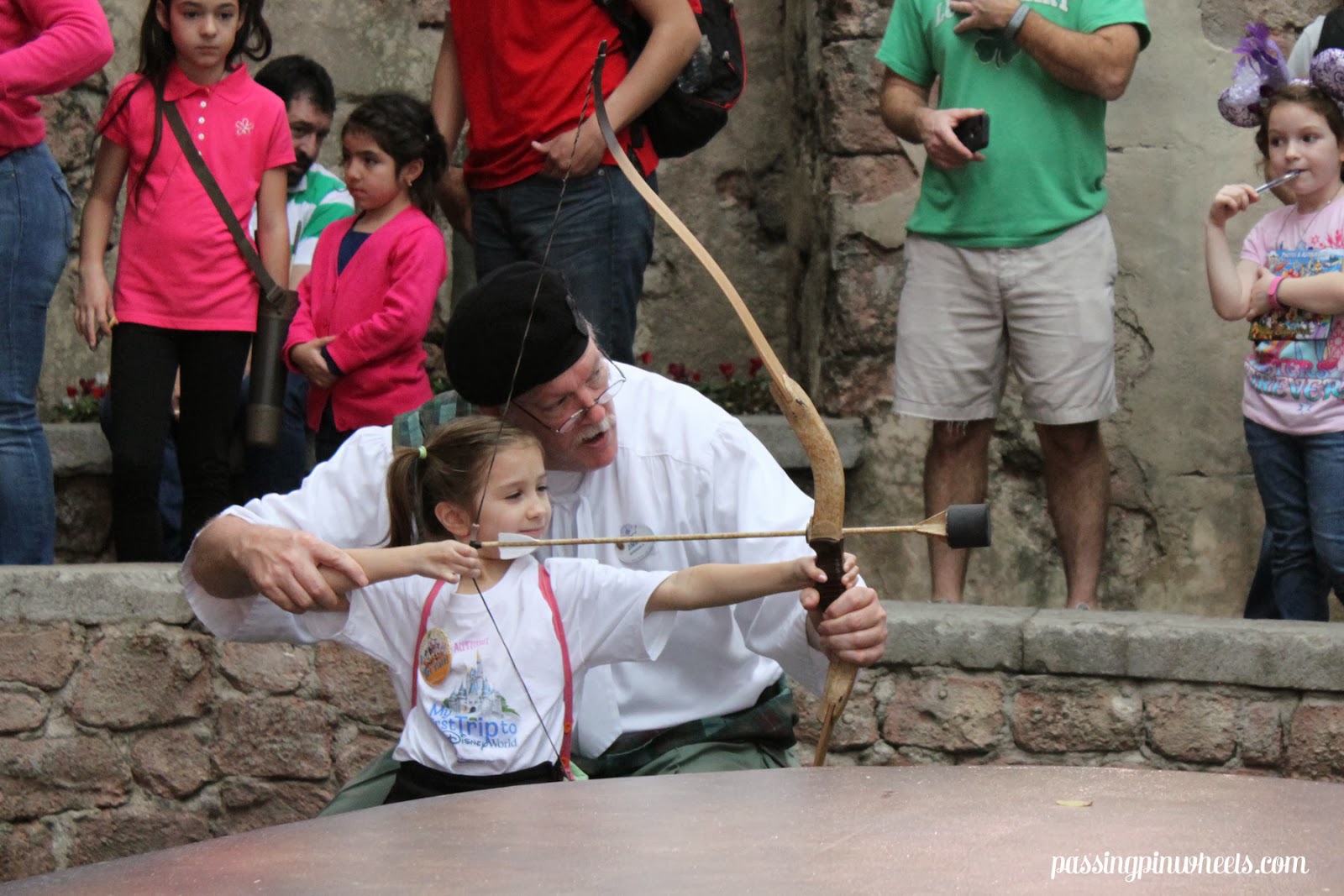 Kind of along the same princess lines, months and months ago, Lainey made Autumn an appointment at the Bippity Boppity Boutique where she got the princess treatment. The only disappointment was that there wasn't a Belle costume. Apparently they have been out since before Halloween which is a little weird. But Autumn chose the Ariel human dress and it was genuinely pretty. After costume and hair, they did her nails and makeup. Nothing over the top makeup-wise. I was pleasantly surprised 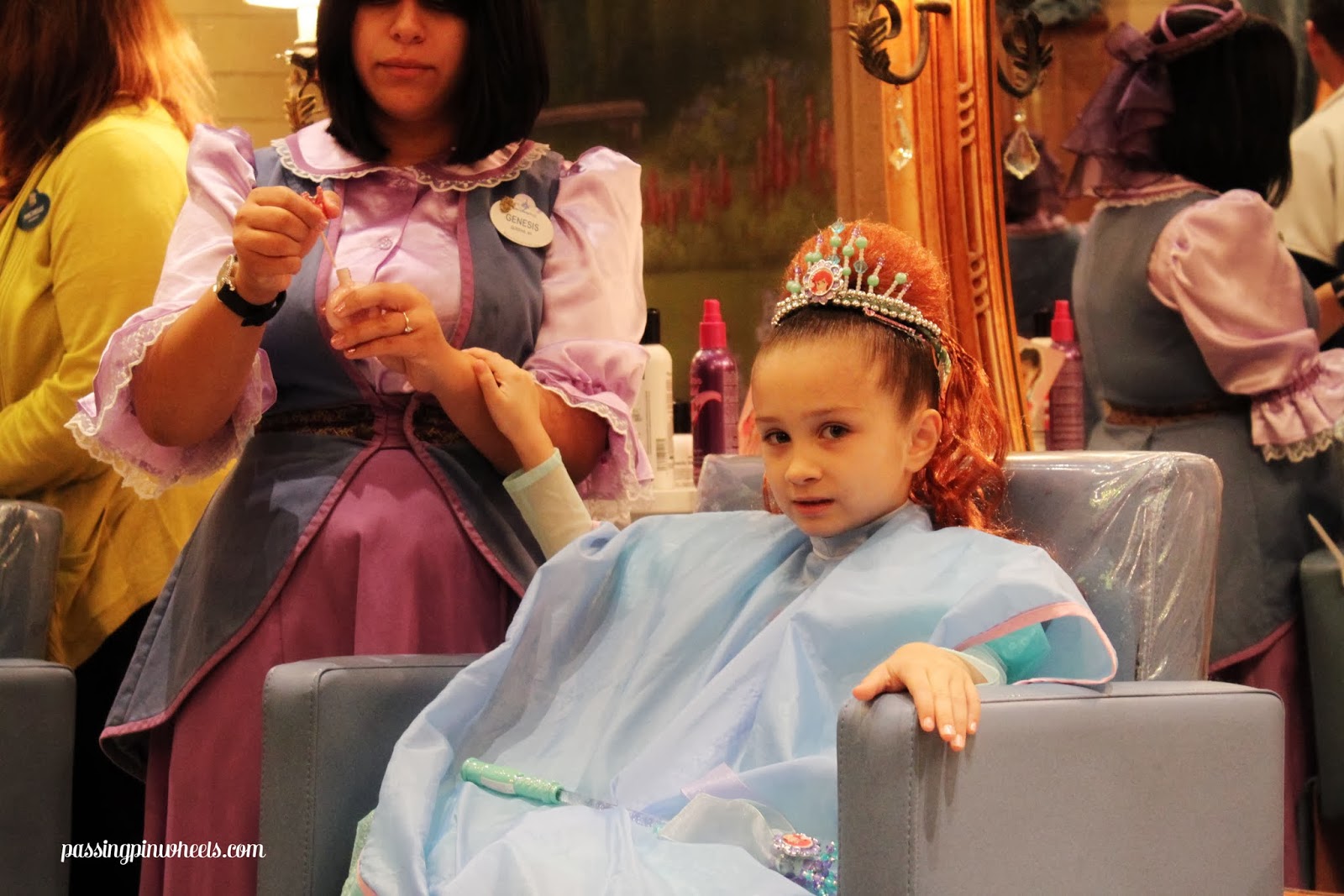 The package included a photo session. How fun is that? I have one of the photo passes with the photos they took during her styling session in addition to all of these so I need to look and see if I want to order any. We did get 3 of the pictures while we were in the studio. This isn't one of them...this is just me snapping photos behind the photographer. Seriously, the package was way deluxe: dress, crown, fake hair, wand, shoes and a backpack with her photos, two nail polishes, her makeup and stickers! 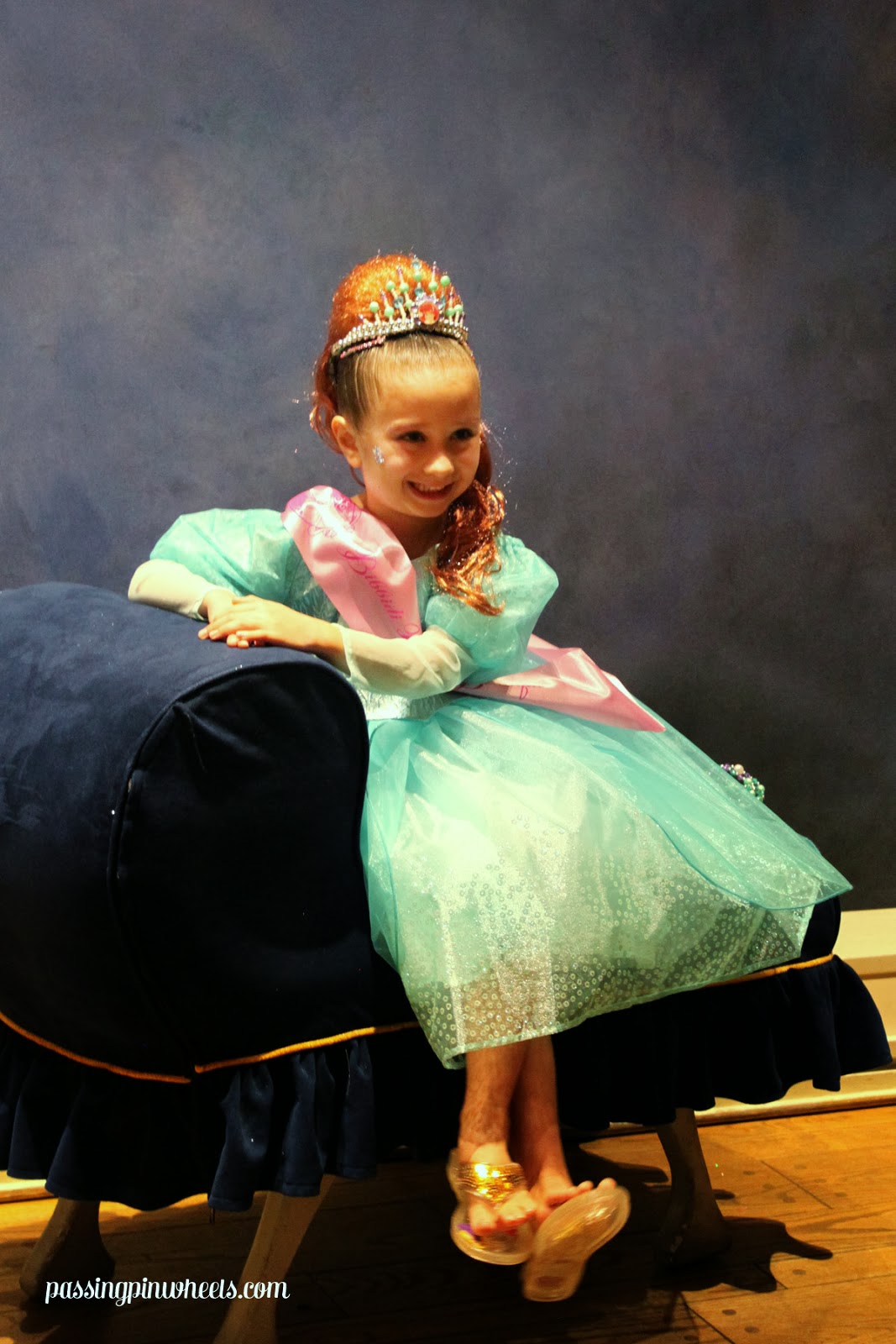 I think that's enough for today so I'll wrap up with this funny photo. Friday morning, when Autumn and Tyler were joyfully reunited, they sat at the desk and examined the map, plotting their paths and deciding what they wanted to ride, taking frequent breaks to cheer and dance around! 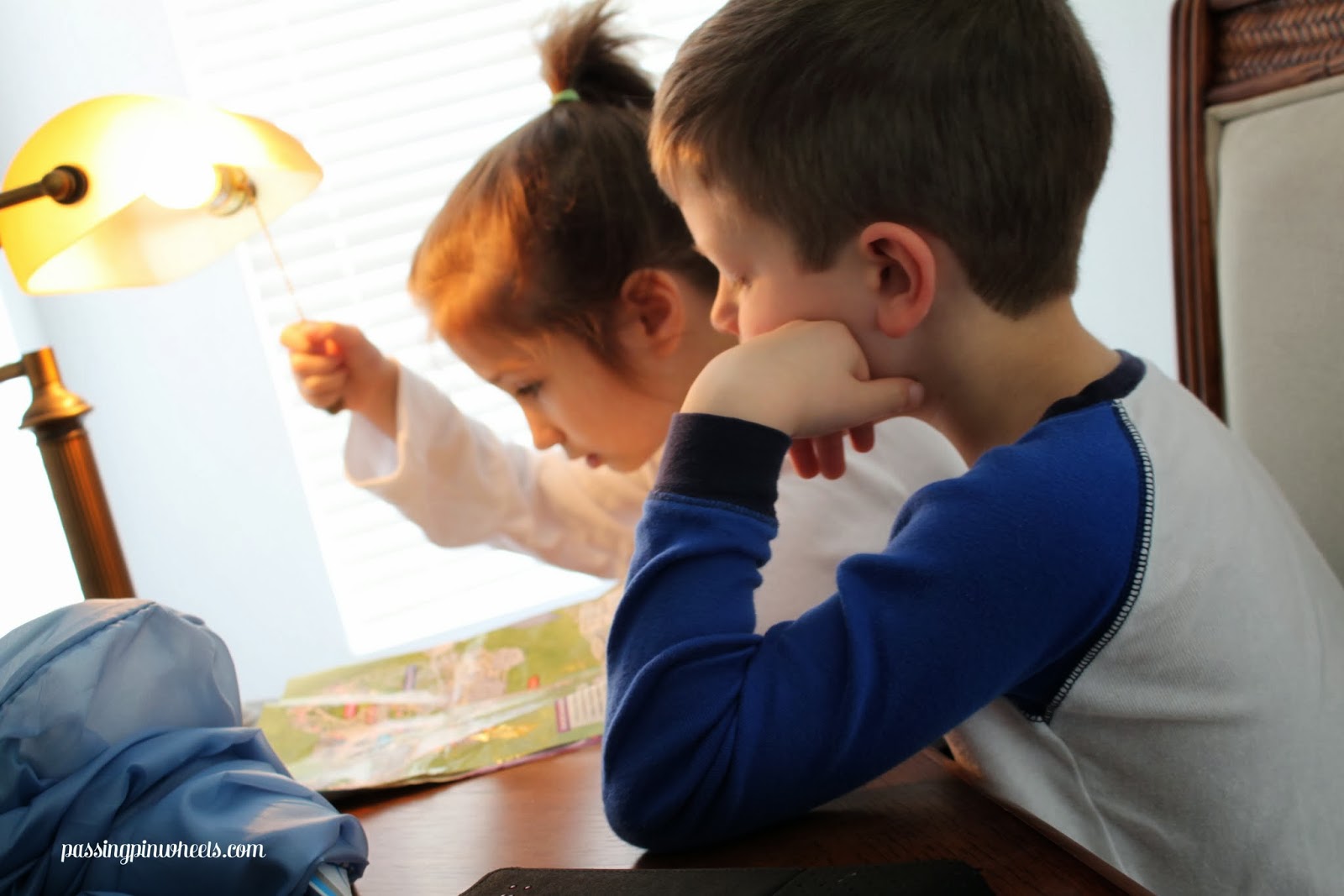 Next time: my favorite character actor, Autumn's fangirl moment, and more! Plus, I might have a potential baby placement date next time I post!
Posted by Sharaze Colley at 8:18 PM