Canes and Joint Locks and Falls, oh my!

This morning, I gave Autumn a hug and she said, "You smell like tea. I like it." YES. Step 1 to Zen Master Sharaze is complete, hahaha. Speaking of zen mastery, something I should know already: life doesn't calm down. I assumed that I'd have more free time after my test but between Tamara's wedding, Aikido, and subbing a bunch of classes there's really no such thing as free time. I'm going to have to be more disciplined!

I still have so many things to update but I wanted to share some photos from my test. I think I've compiled all the photos and these are some of the better ones. As in, not blurred. But mostly meaning my face isn't weird. I am very much hoping that the crazy faces I make in these pictures are moments and not places were my face, like, rests. If you have to look at me teaching and making these faces: I am sorry.

Here I am after the test with the testing panel. There are seven schools in as many martial arts represented in this group. After such a long, hard day, my face was shaking from trying to hold a smile! I had some things to sign and, no matter how hard I tried, I absolutely could not make my fingers hold a pen and sign my name. I had no fine motor skills left. Eventually I could tie my shoes which felt like a triumph. 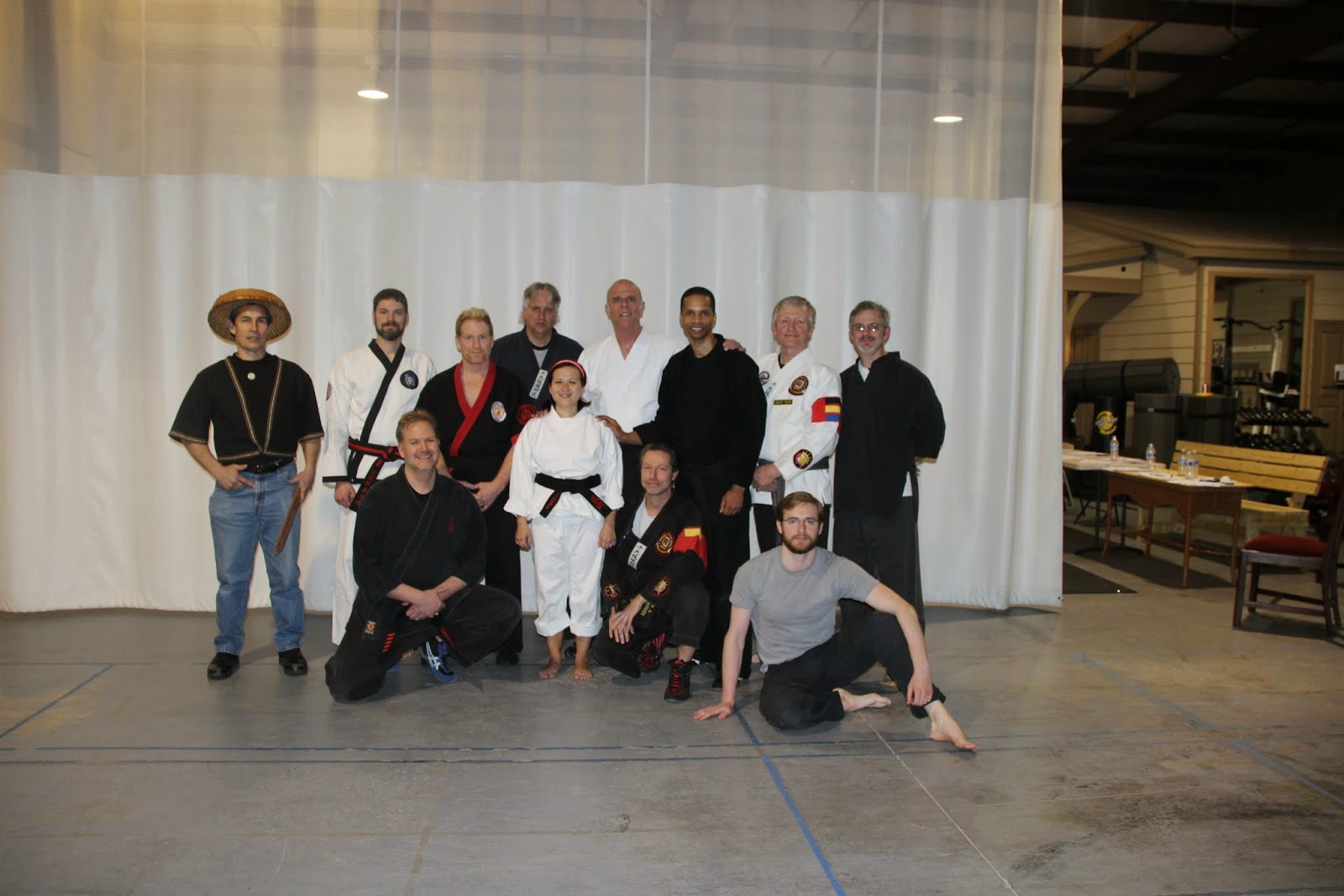 The test had different sections. Part of it covered teaching philosophy and methodology which meant I covered what I teach as well as why and how. At the end of the Aikido portion, which I covered because its my core art, Stephan and I did a short demo of what Aikido looks like at advanced levels. It felt really cool at the time and everyone mentioned how much they enjoyed it. However, I'm not sure that it translated well to video because of the angle. I might still post it soon. I think this is the end of a technique called kaitenage which is a throw I use a lot because it redirects someone much bigger. In the combatives portion I used a version of it that filipino martial arts calls puter kepala. Instead of throwing the attacker away, you stuff their head down and they kind of spiral to the floor. The photo from my last post is a potential ending of puter kepala. 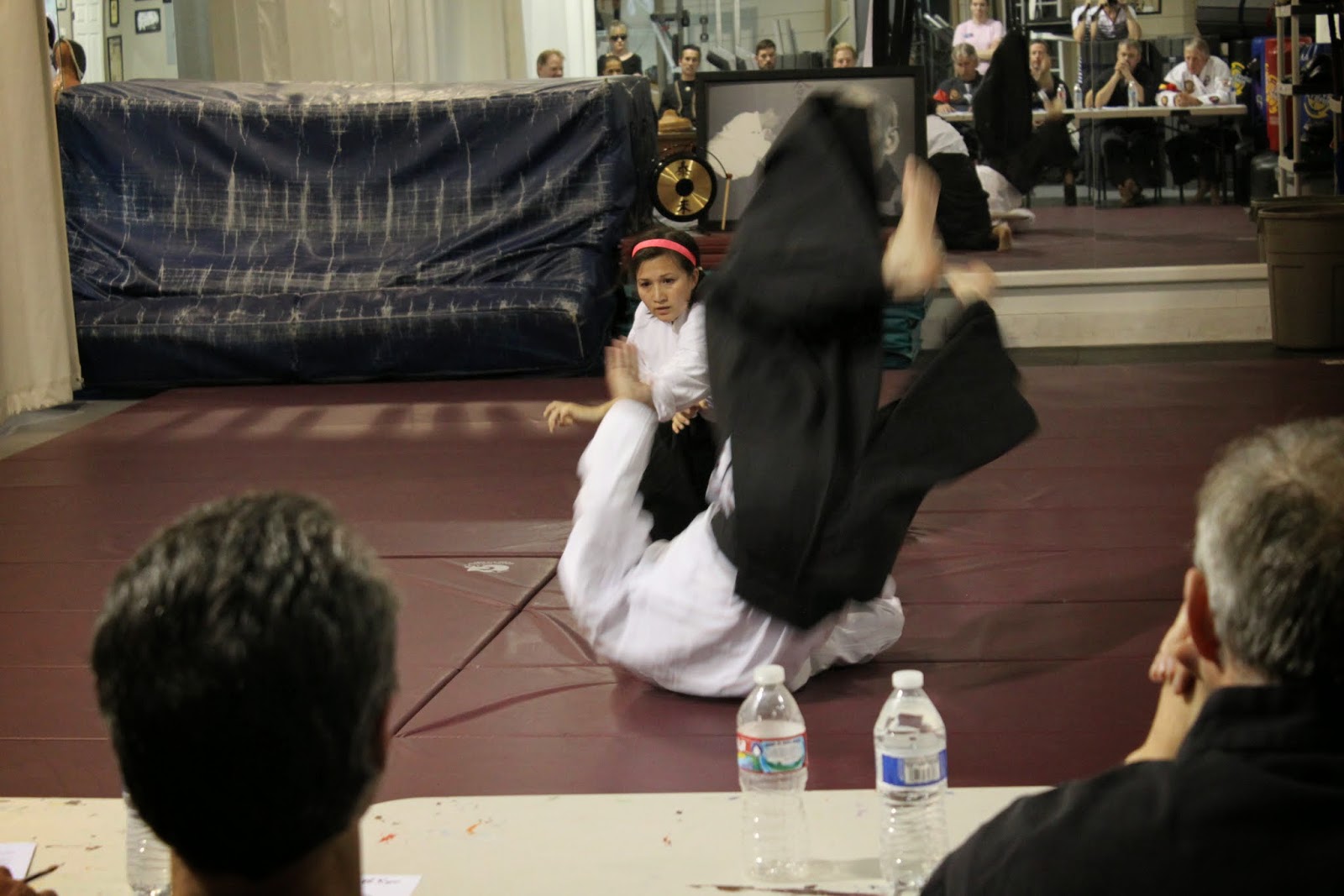 To me, this is one of those things that looks silly when seen out of context. Stephan is so much taller than me that it seems unrealistic that holding his hand like that would keep him on the ground. But this is more of a transition move where I'm putting his hand into a joint lock to maneuver him into a place where I can do something more final, like a pin to keep him down or some kind of arm break or other finisher. It's partly pain compliance, which means it really hurts, but I'm also rolling and adjusting the joints of his wrist, elbow, and shoulder in such a way that he goes where I choose. 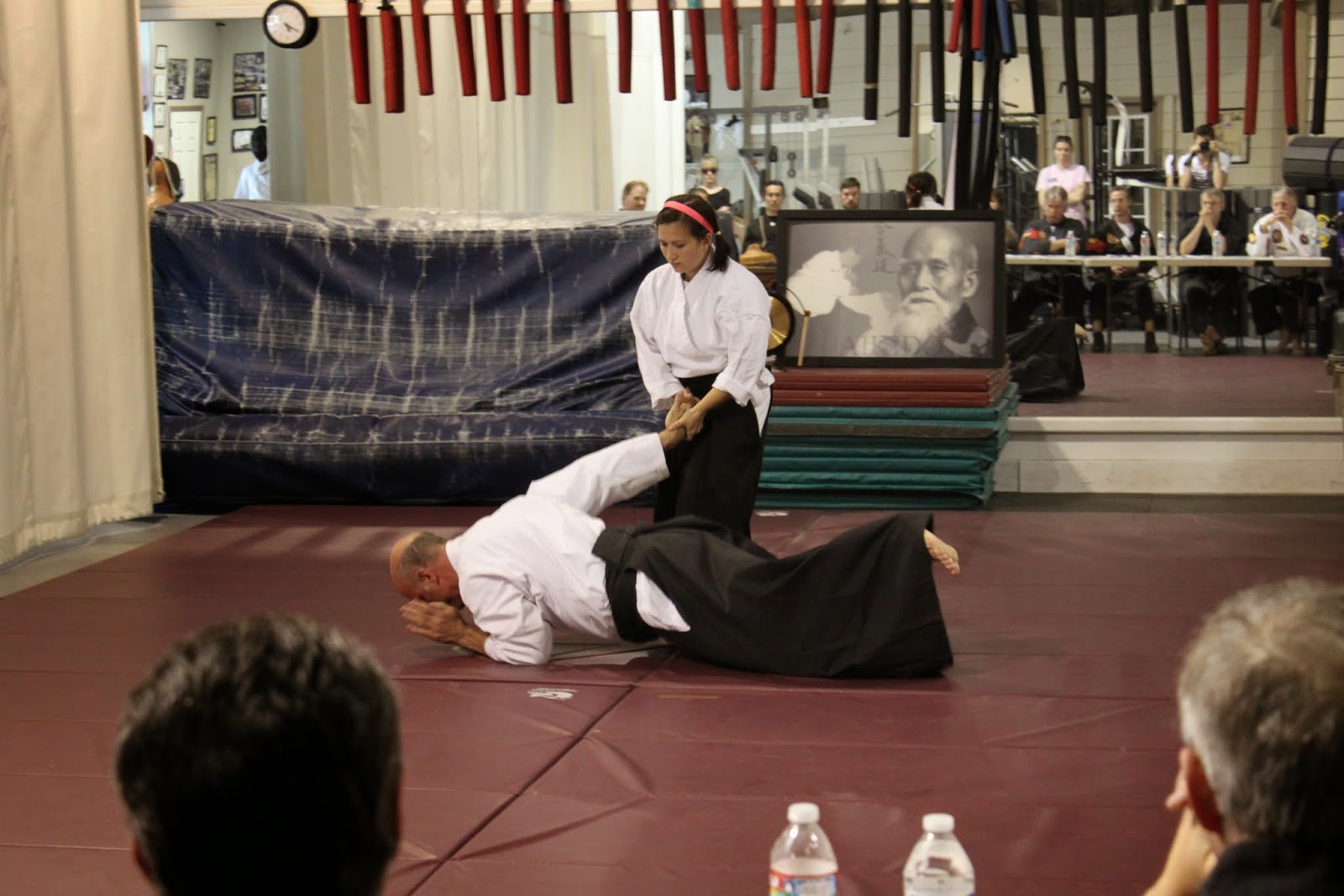 During the combatives section of the test, I got to do something called counter-counter with different people. I love this drill because it's a low key, no fear transition into sparring. I've always struggled with sparring but when I start from here with someone I like to train with, there's no pressure. Just fun! Here, I have a straight cane and Chuck P. has a short stick. The pattern is partner one strikes and partner two blocks. Then it reverses and the partners take turns blocking and striking. In this photo, we're kind of in mutual destruction mode but with impact weapons, I think I won. :D If these were swords, I'd be missing an arm! 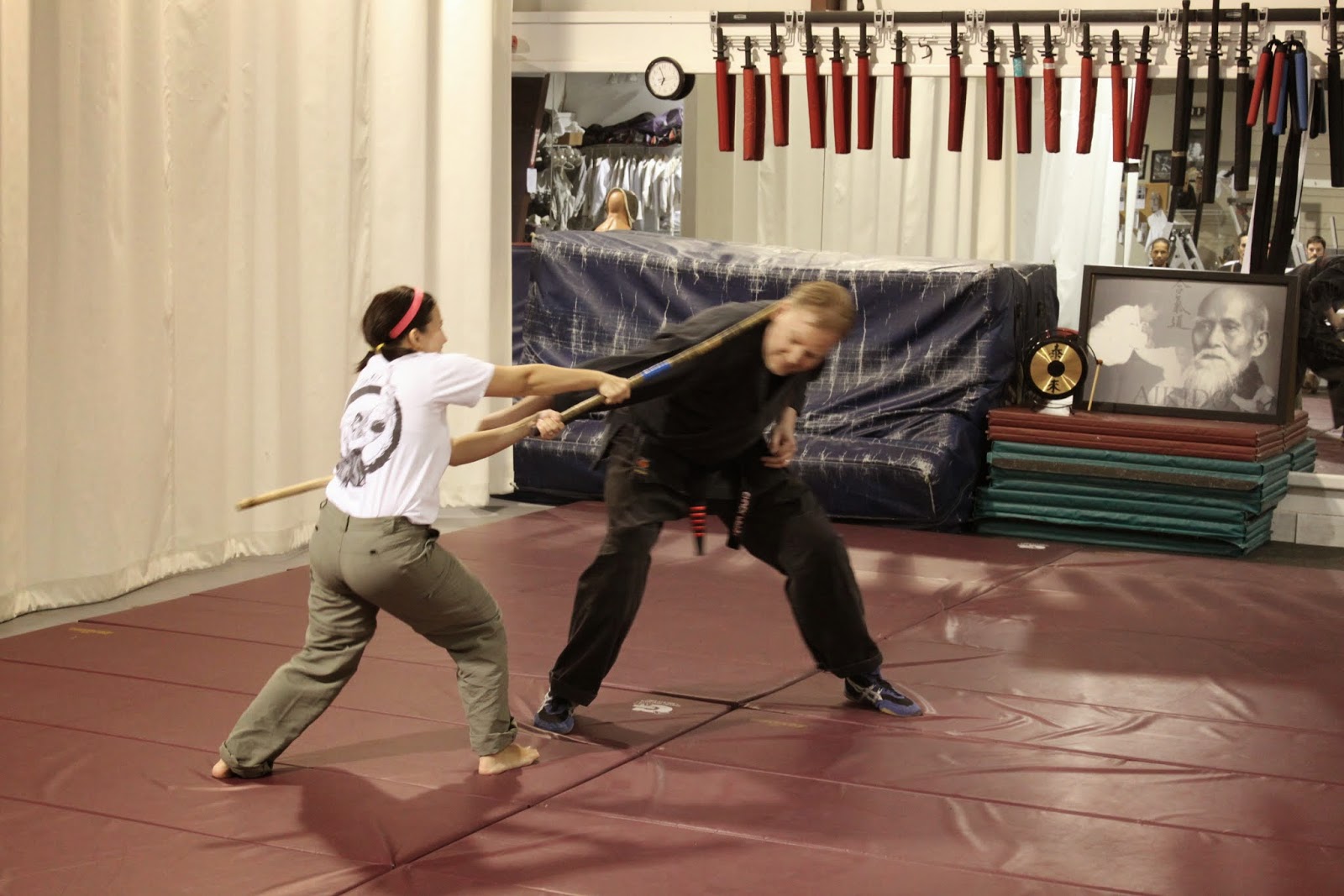 People often wonder how someone my size can get someone to the ground. I chose the next two pictures because they really illustrate how it happens when everything goes well. Matt is quite a bit taller and stronger than I am, not to mention he's good at what he does. I kind of have to slip in and around hitting and trying not to get hit until I can do something called breaking the structure. If I can get his legs to buckle, his head rocked back, his shoulders out of line, or all of the above, I can execute those throws and locks I spend so much time working on. 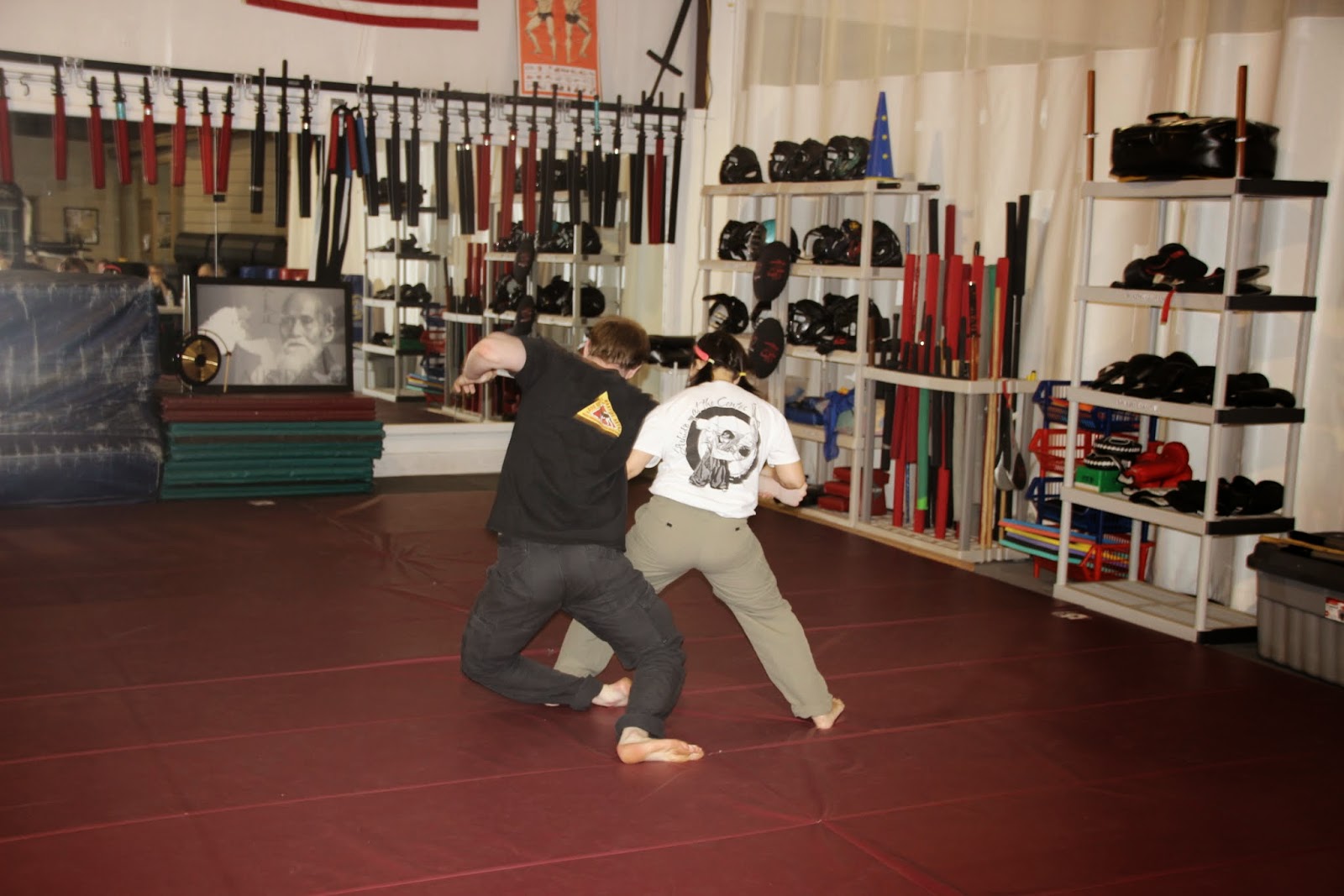 Same thing here from a different angle. I'm behind instead of in front this time and I have no idea what I'm doing but it looks like a shove, ha! 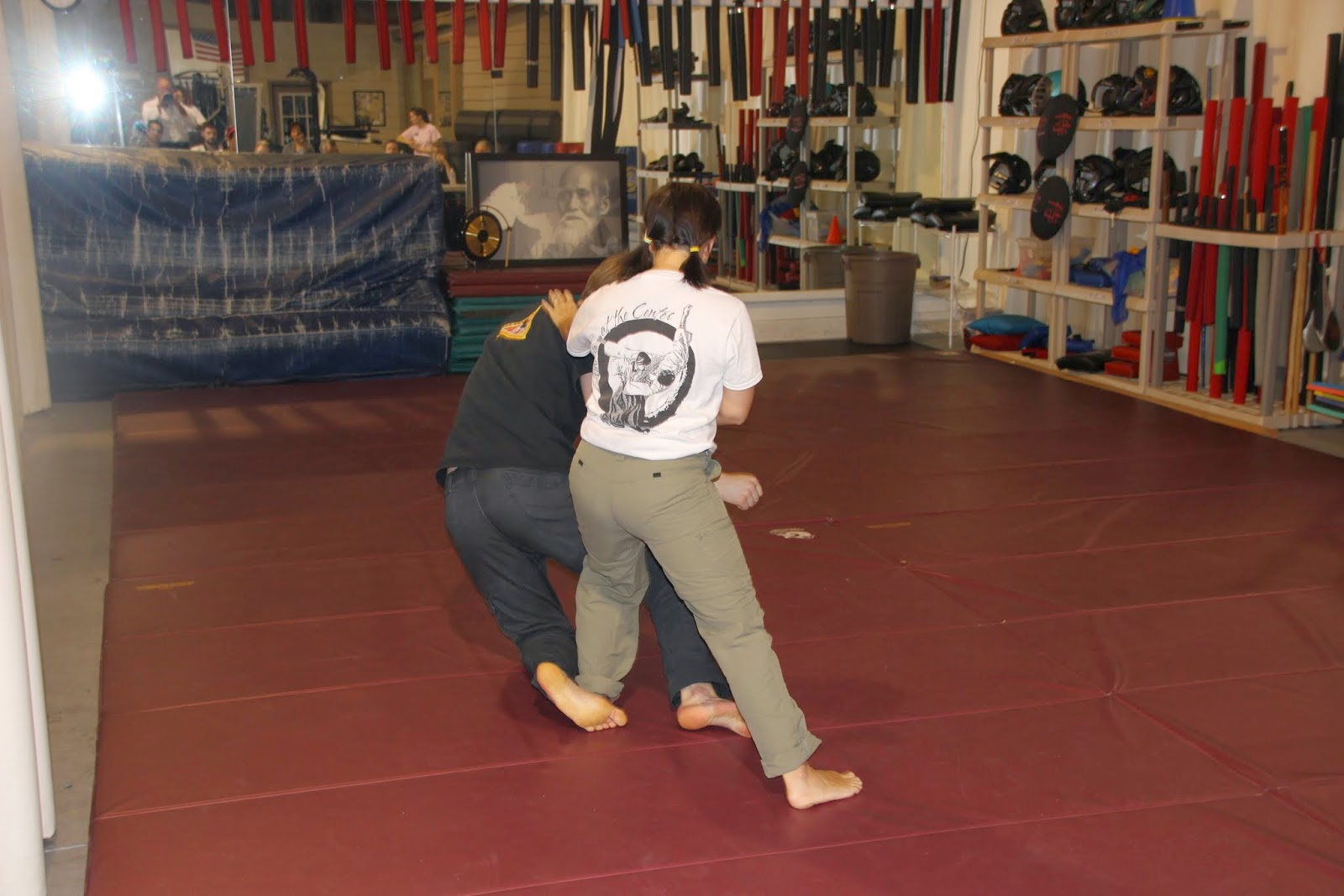 So, those are some photos from the test! I wish I had some of the times I fell over. I'd like them partly to see a still of what happened and partly because I'm sure it'd be rather funny. I need to sit down and edit the videos into watchable chunks. I'd love to post a couple of encounters. Maybe one that went well, one that wasn't so smooth, and one where I probably wouldn't have survived. We'll see how it goes! Either way, I hope you kind of enjoyed this peek into my martial arts experience.
Posted by Sharaze Colley at 7:22 AM