Like many of the kids I know, Autumn loves the movie Frozen. Lainey and I were talking about how odd we thought it was that Autumn would latch onto Elsa, though, because we totally thought Anna would be the one she would resonate with the most. I think mainly it's more fun to sweep around the house throwing pretend ice (or outside throwing very real dirt) than it is to sing about love being an open door.

I really wanted to get Autumn the Disney Store dress

but it's either available from third party, price-gouging sellers or I'd have to do what I consider way to much to get it from Disney. We even sent Donnie and Liz to the store in Vegas! With Autumn's birthday coming up rapidly, I decided to make a dress and asked people who were shopping to grab the Disney accessories if they found them. Penny found a wig (it's too small, nooo!) and shoes and my mom found a scepter. Not too bad!

The dress itself wasn't too bad to make. If I were a better seamstress, the only thing I might have done differently is make the bodice come to a point. As it was, I used Simplicity Sewing Pattern 4764 Child Special Occasion Dresses

. The store had a $1.99 pattern sale plus sales on the materials so I made this dress for something like $30. I could have gotten out for less if I had gone with less durable materials but I knew Autumn wanted this to be her Halloween costume. With Halloween in mind, I top stitched everything for extra security. 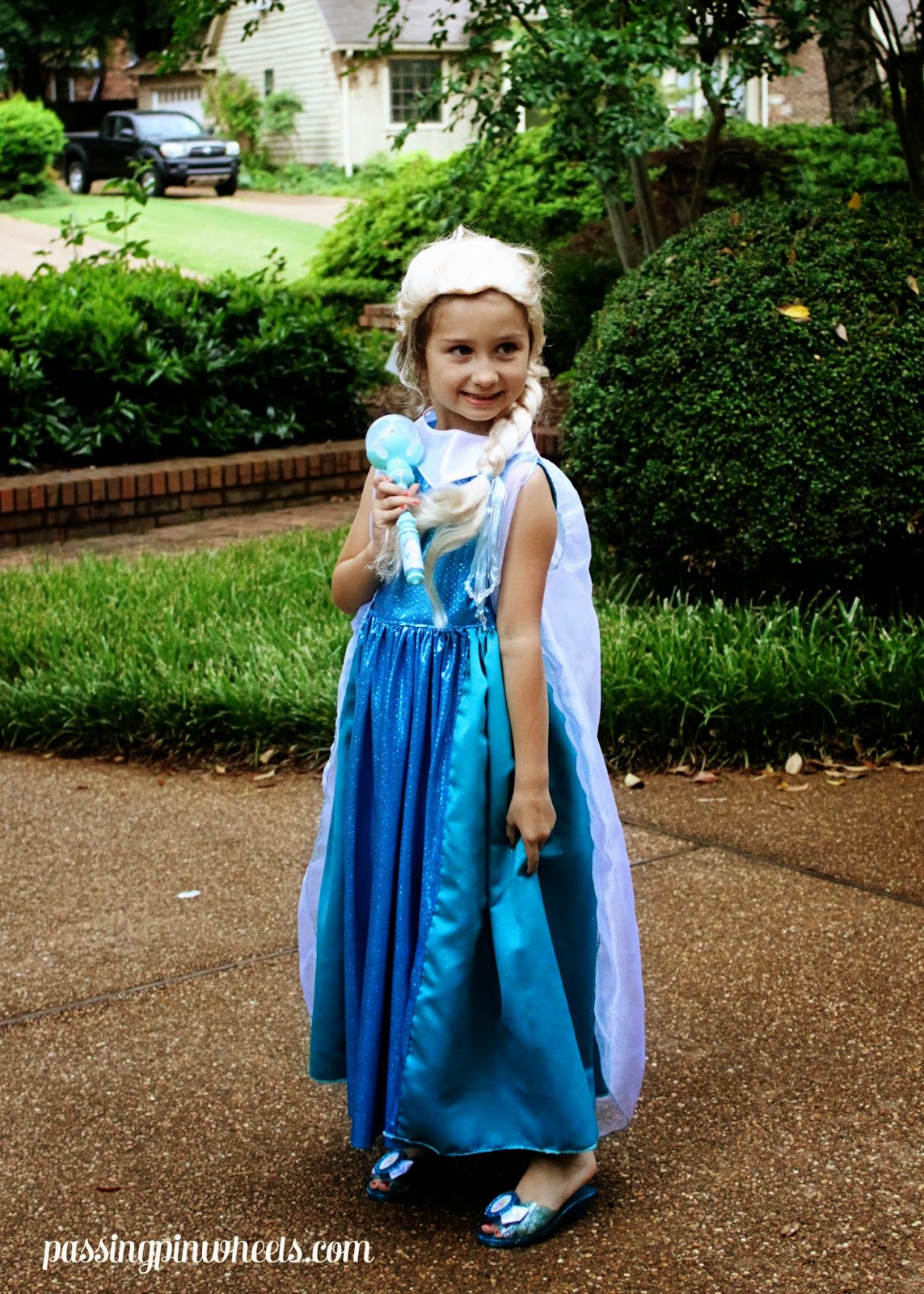 I bought too much of the performance fabric but not enough of the lighter blue material. I solved the problem by making the front panel with the performance fabric so the entire dress is darker than I intended. My serger haaaaaated the performance fabric so the hem of that fabric isn't finished. I'm not sure what I'm going to do about it but so far it doesn't seem to be unraveling. I don't think you can tell in the pictures but the satin (and the cape) has some glitter in it and it got everywhere. Mike and I looked like we'd been at a bachelor party all weekend we were so covered in the glitter that covered the playroom! 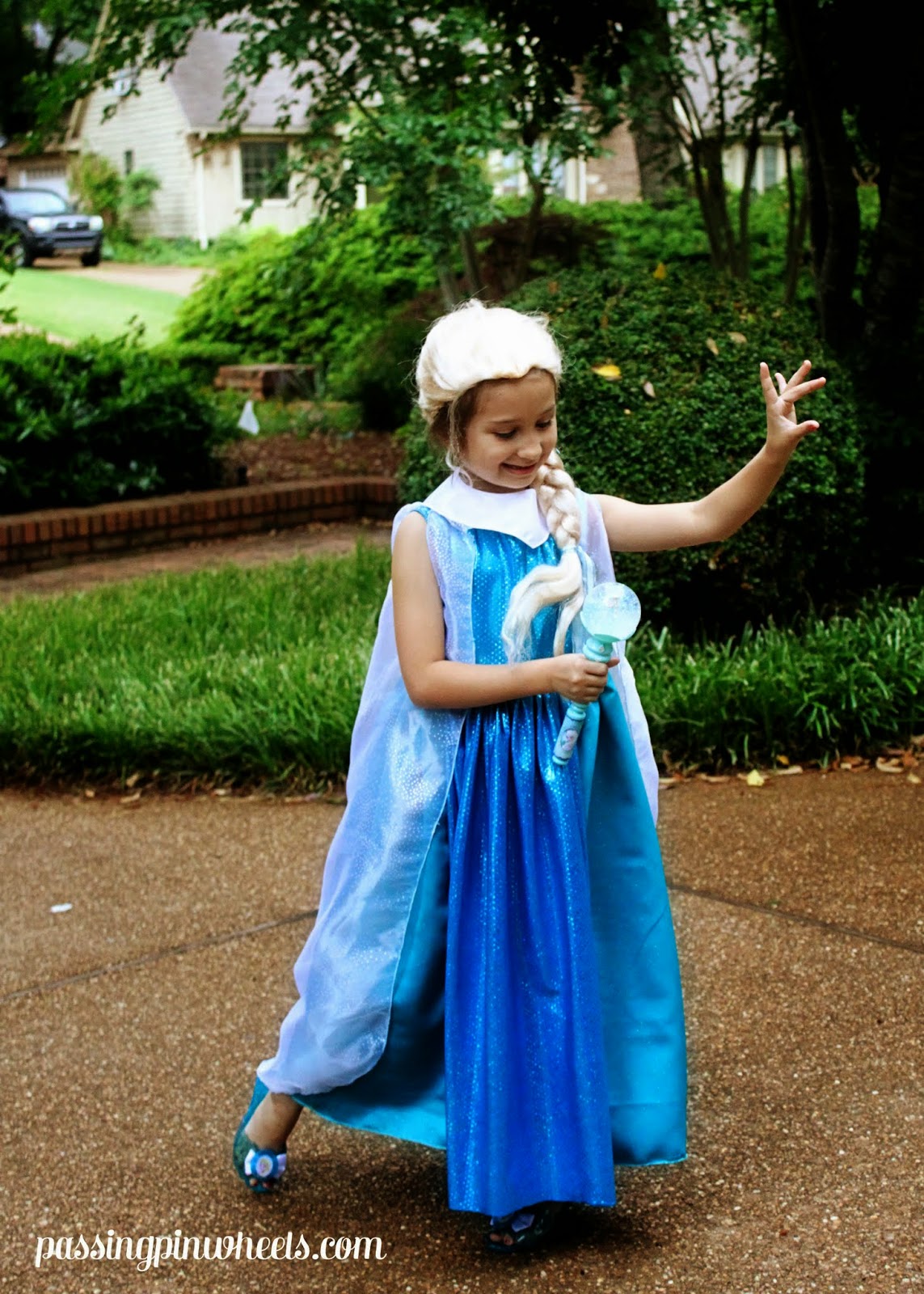 As you can tell, Miss Autumn loved the dress. She said she liked it better than the one at the store! The dress was a big hit but the biggest hit? The cape! And I am so glad because that cape took almost as long to make as the dress and I had to take it to Nanny for advice. I was  overly ambitious with it but my thought process was that I didn't want Autumn to have long sleeves because she's always hot and she's also going to wear this at her birthday party in June (May is so busy). The pattern has some gauntlets and I am going to make them out of the same fabric as the cape when it cools off some. Most of the DIY costumes I've seen tuck the cape into the bodice which is attached to a shirt but I preferred a removable cape and a top that would be a little more durable since Autumn is more rough on her clothes than one might expect. 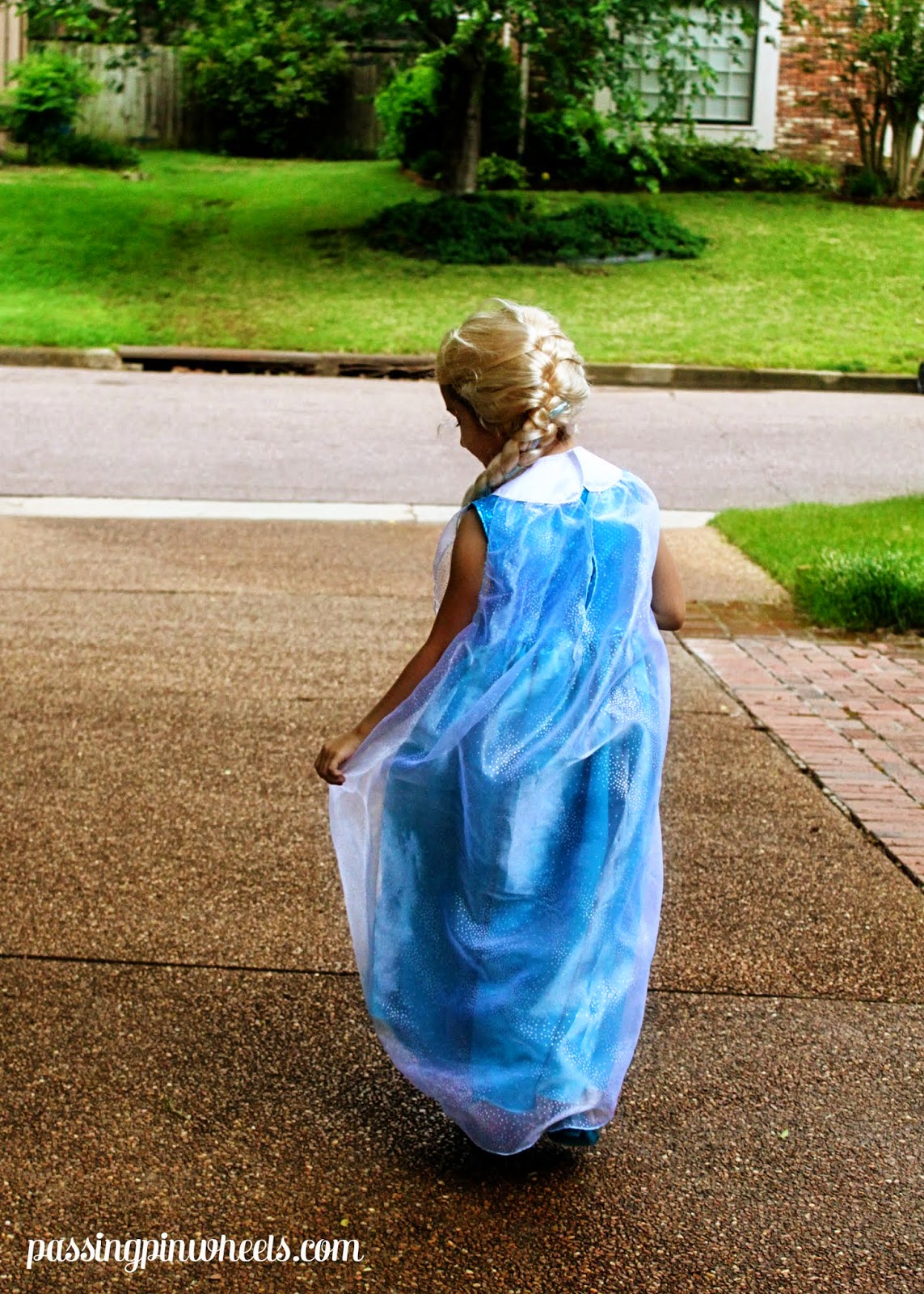 I took inspiration from Autumn's Elsa doll who has a cape attached to a collar. It goes over the doll's head and velcros in the back. The cape goes under the arms like in the movie and would keep the material off of Autumn's throat. She loves capes but they choke her after a bit. I have a lot of sympathy because I'm the same way. I cannot handle anything around my throat.

I cut the cape fabric in a curve slightly longer than the dress and then cut arm holes in the side, measuring the location of the arm holes against the dress. In the middle of the back, I cut a slice out to make the space for it to go over her head and serged the edges on the whole thing. Using a peter pan collar as a base, I cut a piece of construction paper in the shape I wanted. The peter pan collar's front became the back of the cape. The only change I made to the peter pan collar other than using it backwards was cutting the big curve into a point. I cut 2 pieces of white satin I got from the remnant table and one piece of iron-on interfacing to give it structure. 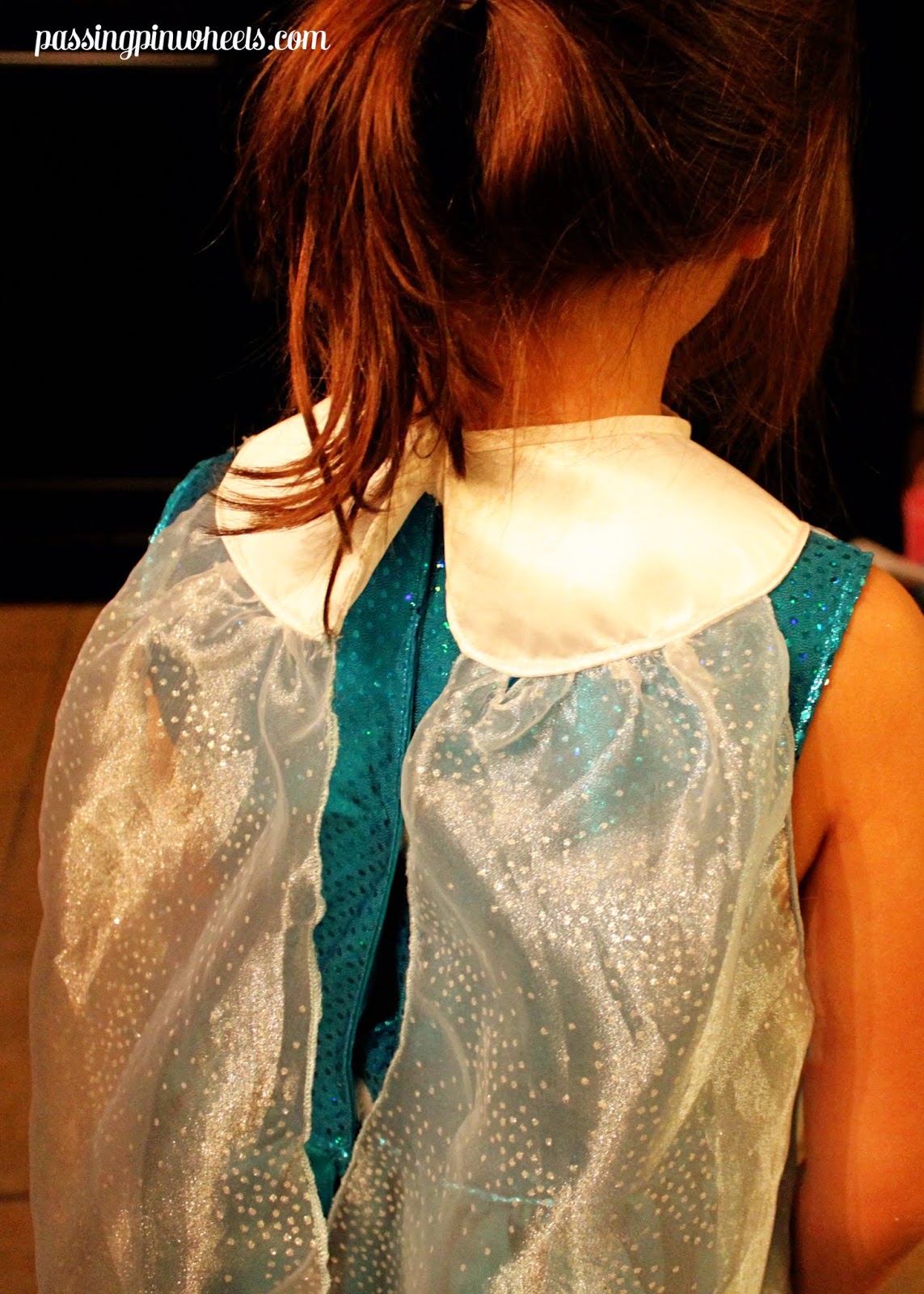 This is where I had to have a consultation with Nanny. My first attempt, which I won't even confuse anyone with, completely failed. I had an idea about what to do but I wanted to check before I wasted another collar. At Nanny's suggestion, I sewed two rows gathering threads on the back pieces of the cape and then, with right sides together and the cape material in between, I sewed the cape to the bottom part of the collar. 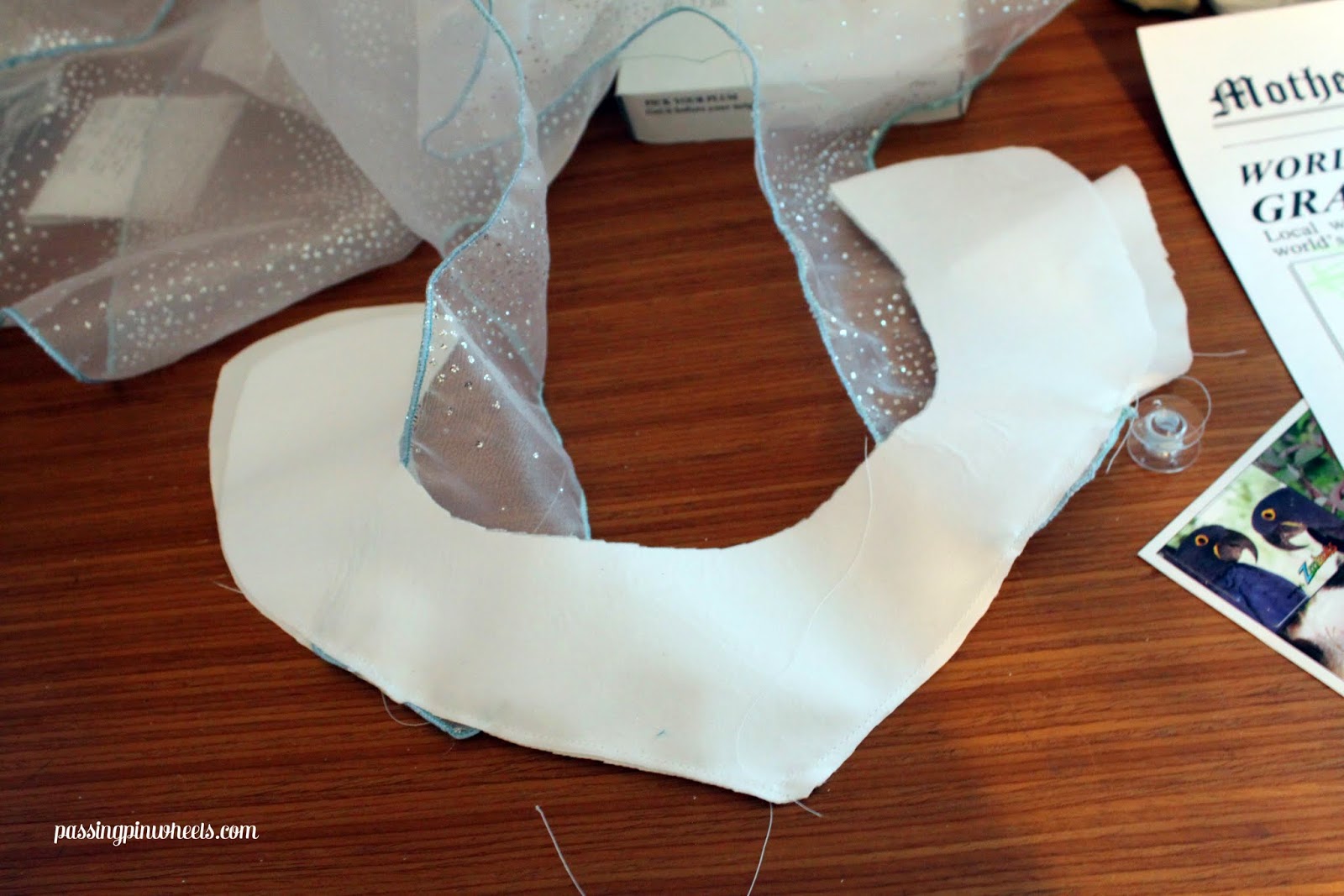 I didn't even think to ask Nanny what to do after that so I improvised. There may be a better way to do this but it turned out pretty well! After turning the collar right side out and ironing it in place, I used bias tape to close the neckline of the collar. I could have made my own if necessary but I happened to have white bias tape from a previous project. After I sewed the bias tape in, I top stitched the entire collar and then sewed the velcro to the back collar. 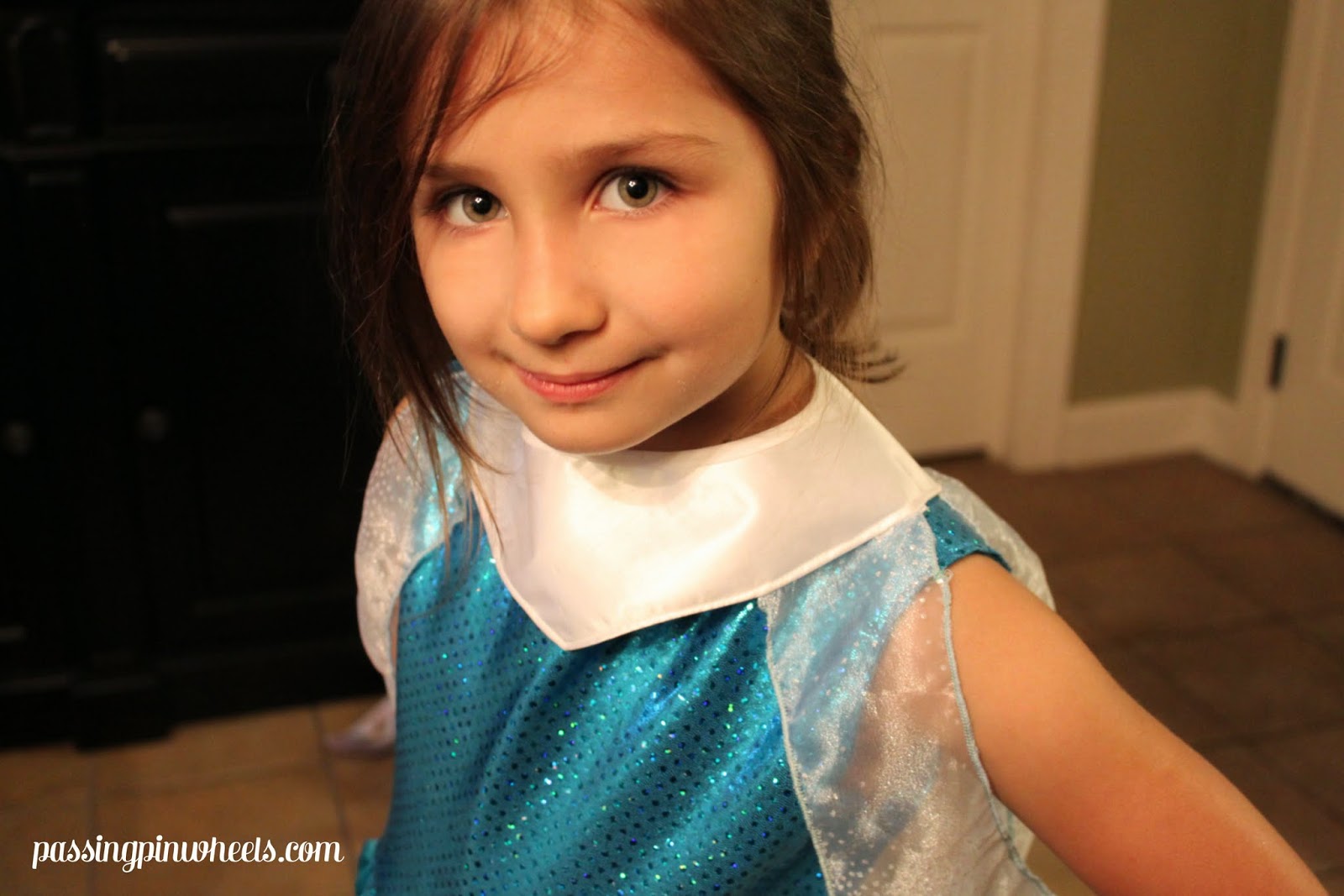 So far the dress is holding together! Autumn wore it to the restaurant on her birthday, took it to her grandparents' house over the weekend, and has romped around like crazy in it! In this picture you can see where I serged the edges of the cape and the hemline of the dress. I decided not to bother with a folded over hem. I might change my mind later, though. One change I already had to make was to the back of the dress. I had velcro dots but the weight of the skirt kept pulling the bottom velcro apart. Rather than go buy a strip of it, I made buttonholes using the wonderful button setting and foot on my sewing machine and attached clear buttons. 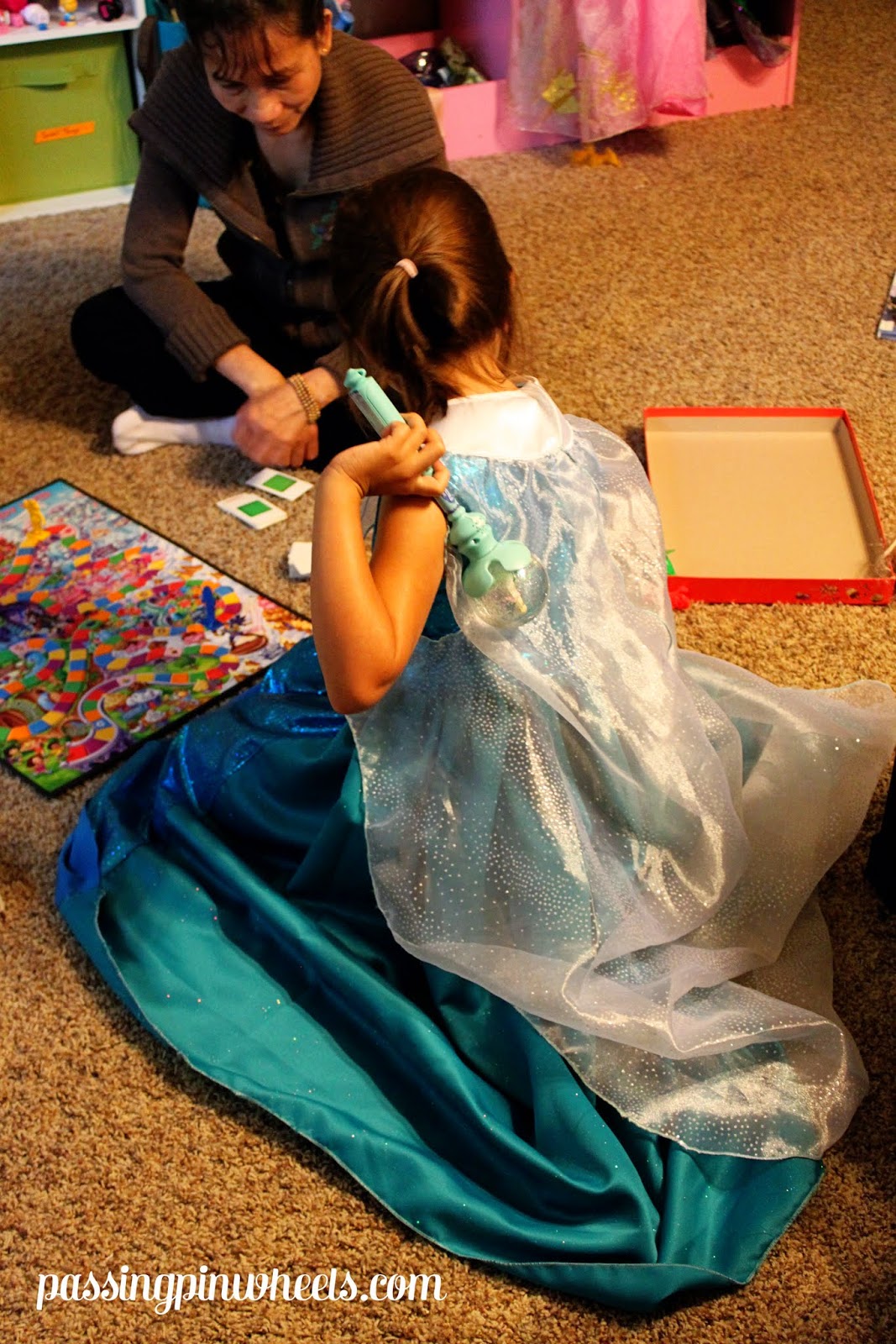 All in all, a fun and not too difficult project!! And I'm not kicking myself anymore about not going to see Frozen at the movie theater before we went to Disney! When we were there they had a special Frozen package at the Bippity Boppity Boutique but we hadn't seen the movie yet because I had the flu before Christmas so Autumn wasn't interested in the Frozen costumes. She wanted Belle but they were out so she dressed up as Ariel. The Ariel dress is lovely and Autumn wears it all the time but, still, after Autumn fell in love with Elsa, I couldn't help but vaguely regret the timing. But no more! 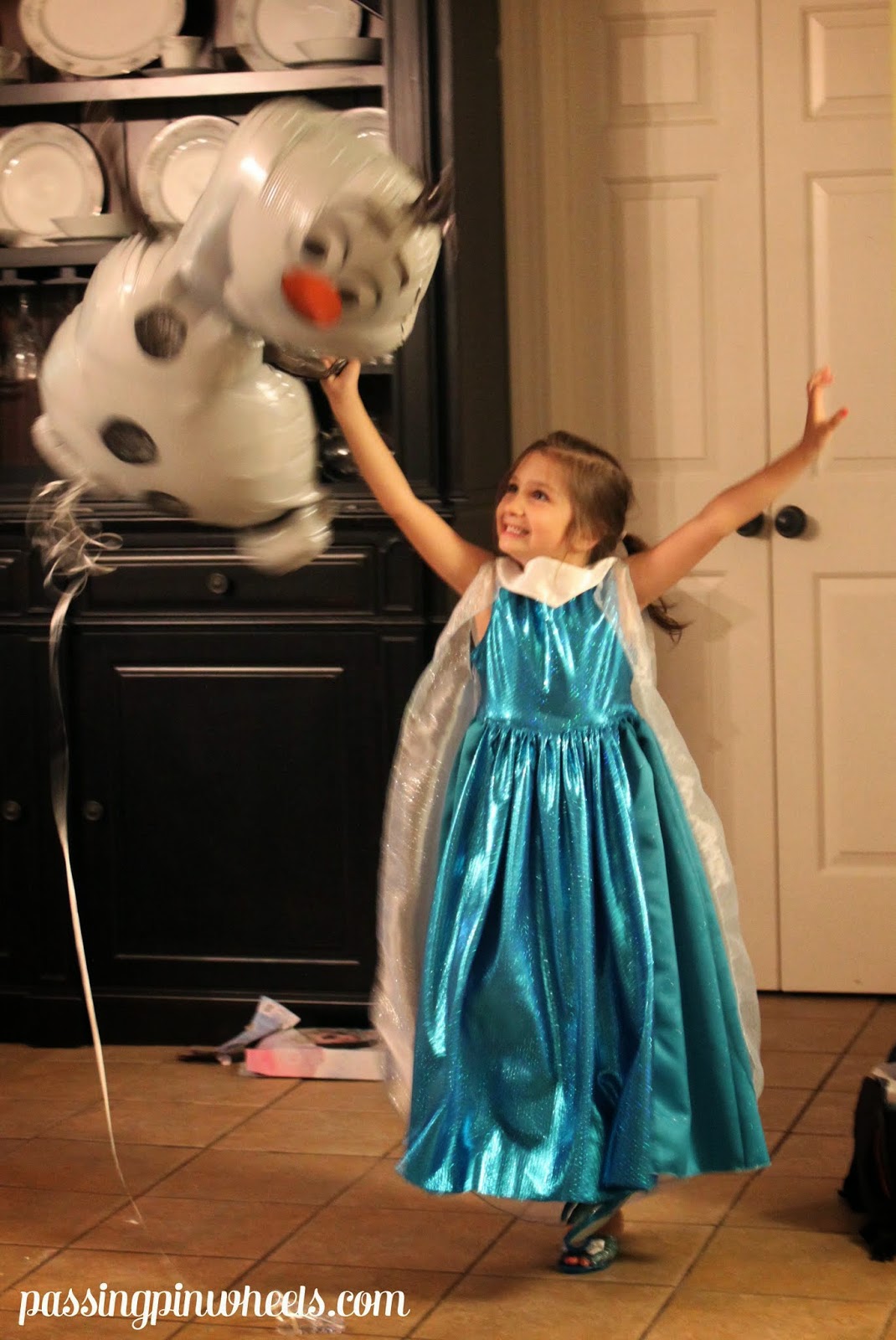 submitted to skip to my lou's made by you monday!
Posted by Sharaze Colley at 10:10 AM