I've had these photos in my queue forever! You guys know one of my best friends got married last month. We had some fun events leading up to Tamara's wedding and I thought I'd start with her couples shower. We decided on an ice cream social and thoroughly enjoyed planning it. Although...the day before the shower it was beautiful. 70 degrees. Breezy. Amazing. The day of the shower? WINTER STORM WARNING. No lie. We had a small crowd as a result but we still had a great time. 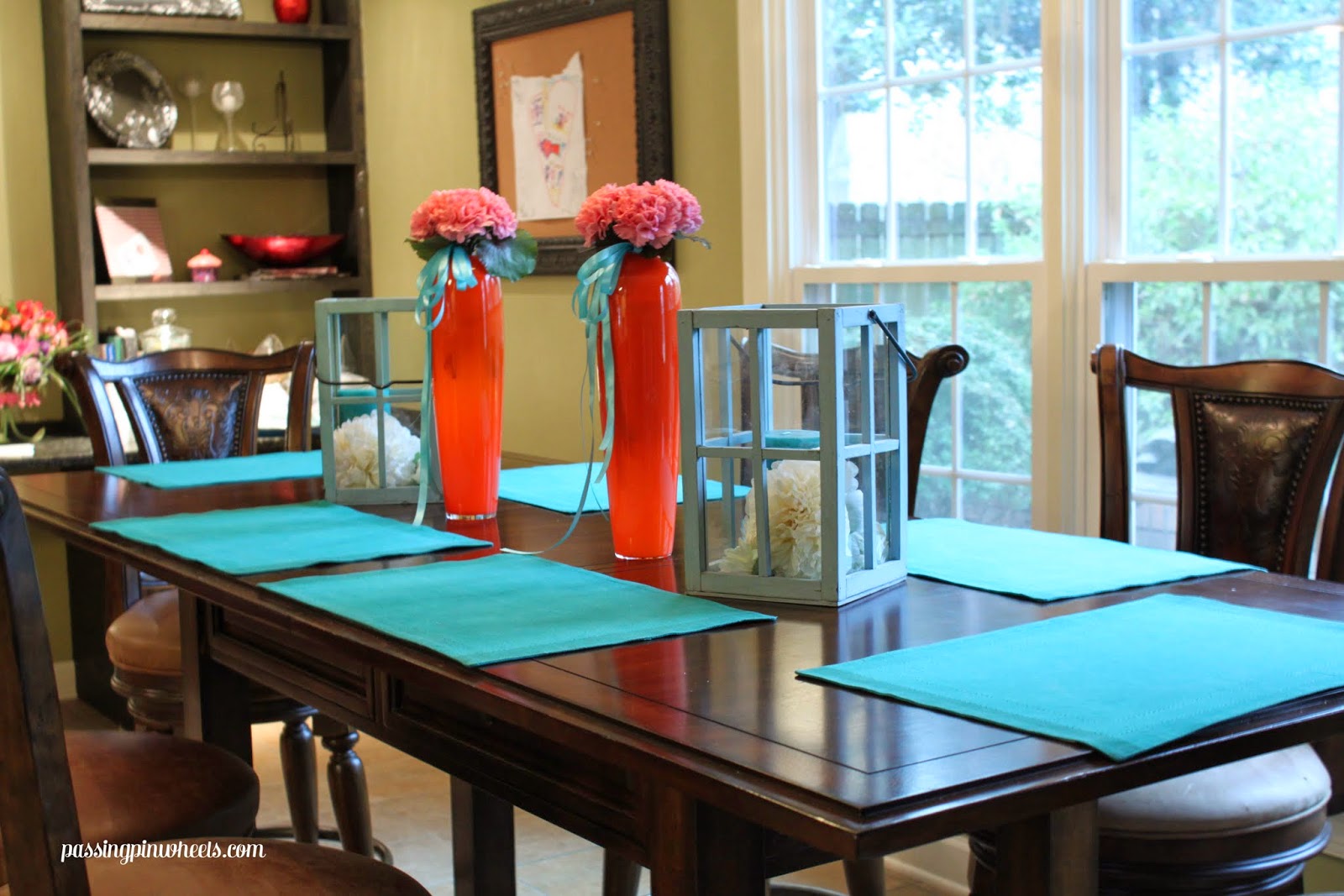 Cheri helped me out with a few decorations but we kept it pretty simple. The colors were blue, orange, and hot pink. Which...I think I might like those colors because I kind of happened to have a lot of those colors around. The balls in the basket below and the place mats and lanterns above are mine. Cheri happened to have the vases in both photos. 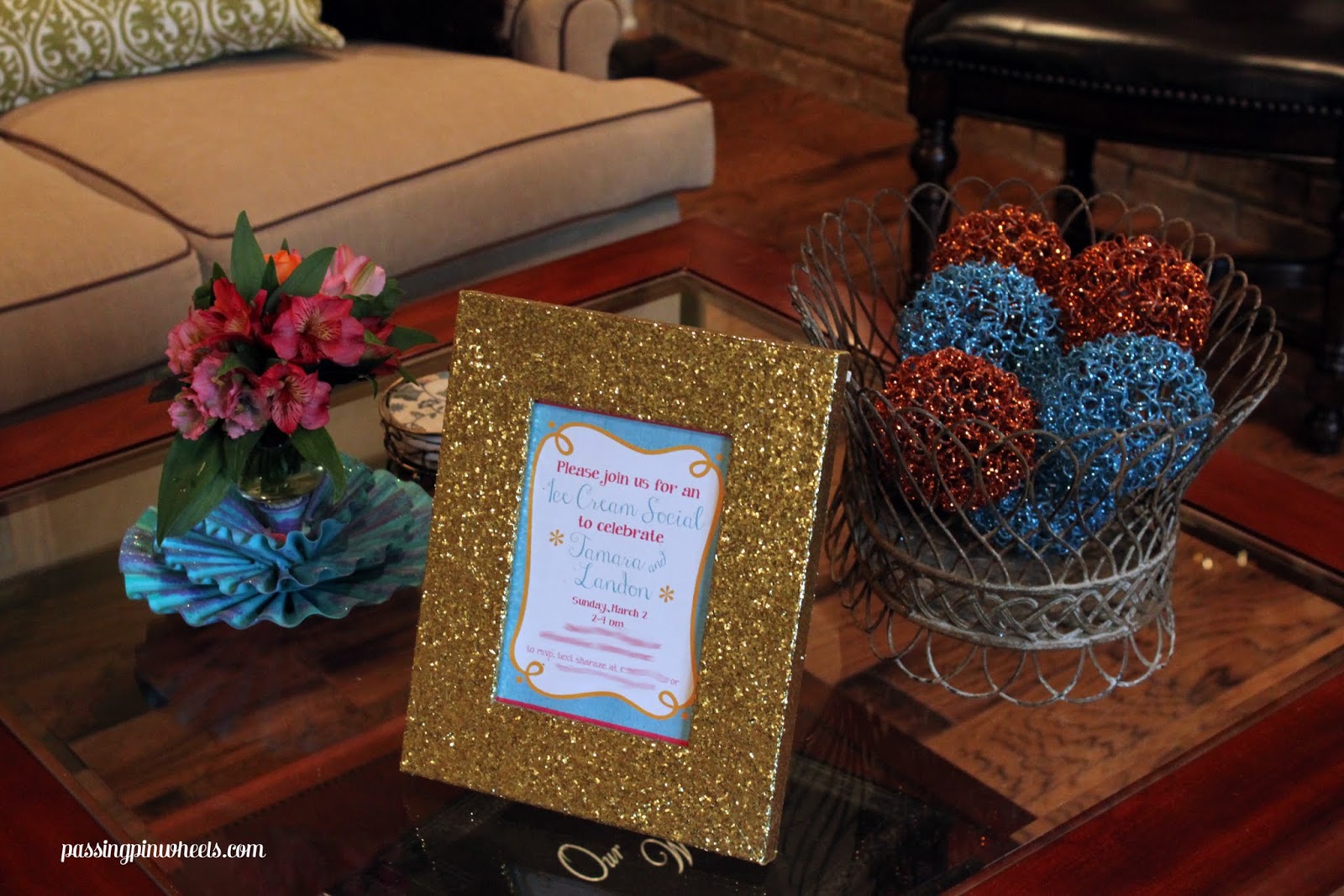 Before this party, I gave into a temptation I've been dealing with for more than I year. I bought a Fujifilm Instax MINI 7

because it was on sale and, well, I couldn't resist any longer. I'm still working on putting it together but I got a little book to put the printables in and everyone at the shower had their picture made and filled out a "special wishes card." Note that on the instruction card, I misspelled the name of the camera. 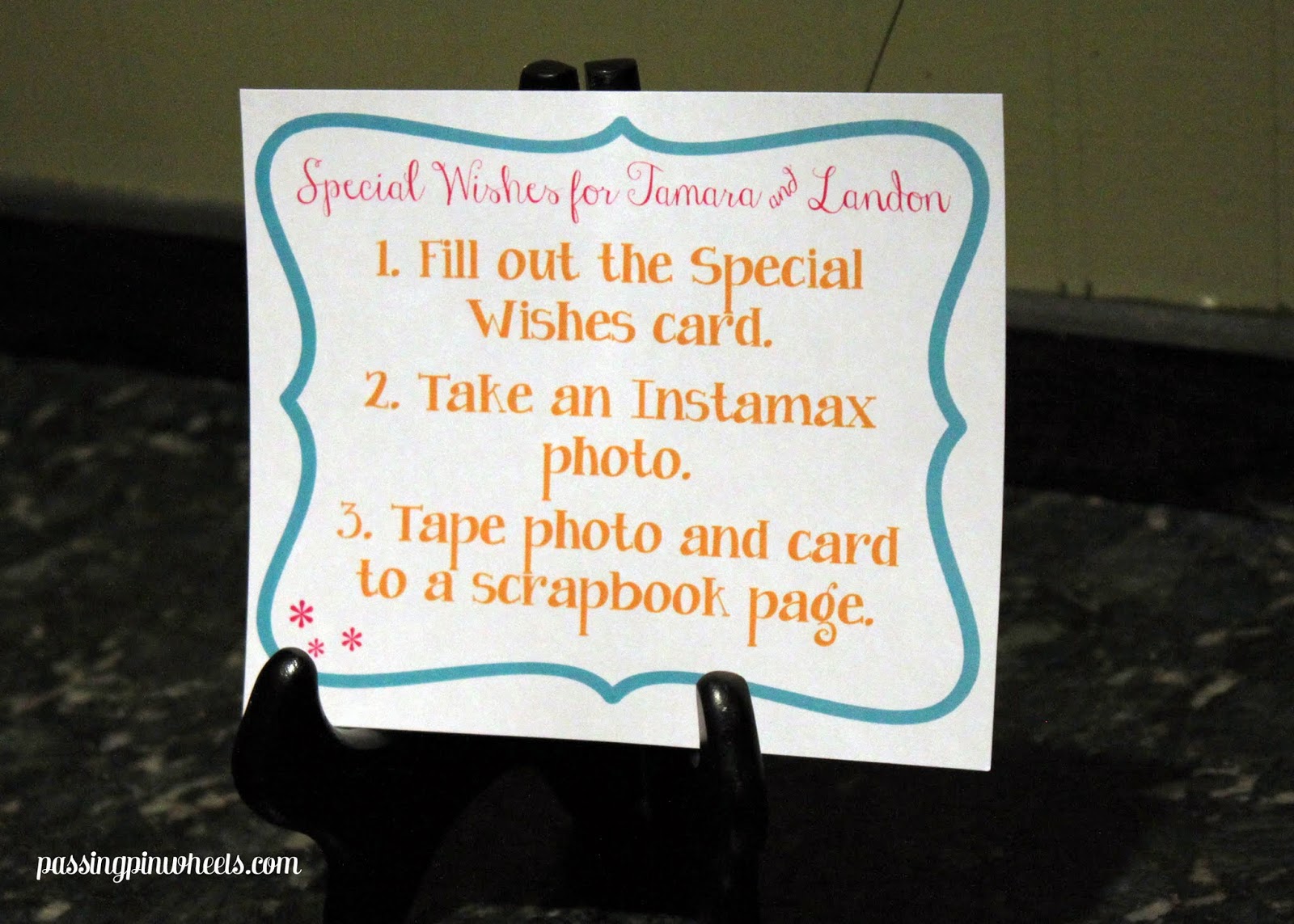 I get a little worried about shower games and activities. I generally hate them but I know a lot of people like games so I tried to think of something fun to do. I believe everyone enjoyed this and we had a nice combination of funny and sweet wishes. In the scrap book, I'm going to put each person's photo next to their wishes card. 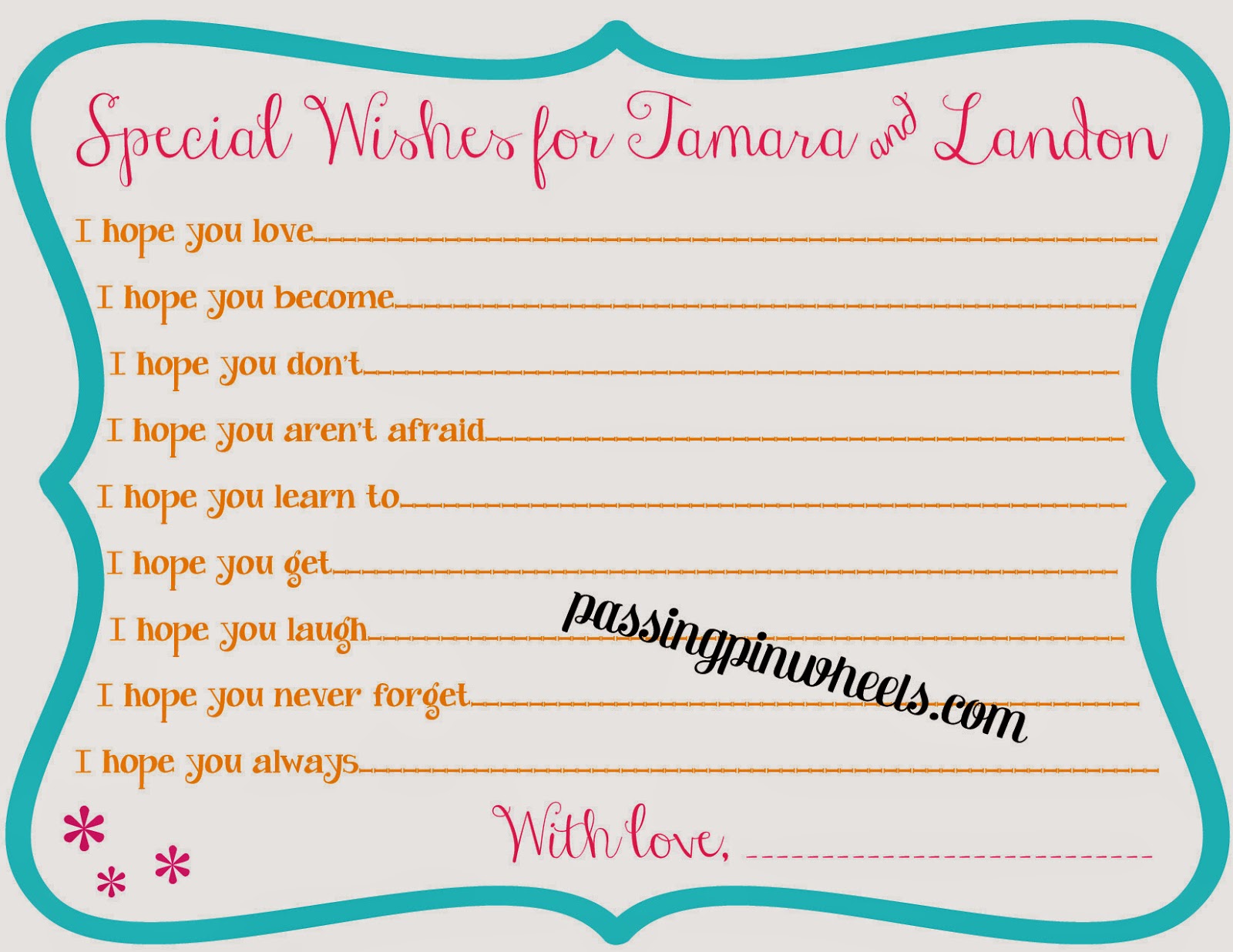 I have a hard time taking photos on the bar in the breakfast room because it gets so whited out from the lighting but I loved this little arrangement so much I had to use this photo. The flowers from the shower are another deal I got the better end of. I traded water bottle labels for a shower Cheri threw for these arrangements. I put these flowers with the water, the wishes card, and the camera. 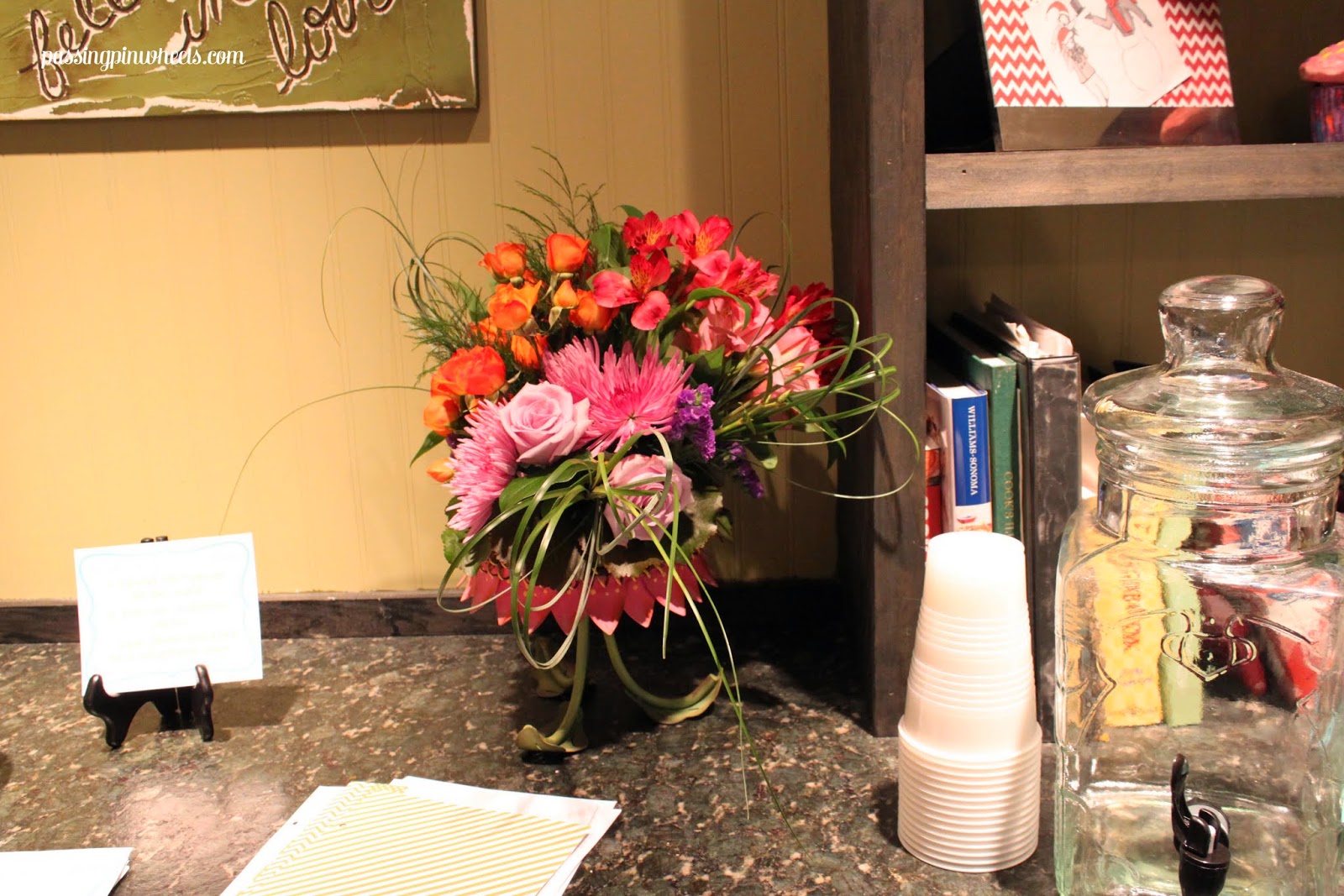 This, I didn't expect to come out okay. I made the tassel banner the night before on a whim because the living room seemed to lack some color. At first, Mike and I thought this was a huge failure because it seriously looked raggedy. I am SO GLAD I decided to try to hang it before I put it in the trash. Way, way cuter hanging than laying on the floor! To make the banner, I cut coordinating fabric from my fabric stash into strips, folded each stack in half and tied it with another strip of fabric. I really liked the banner and left it for a while! 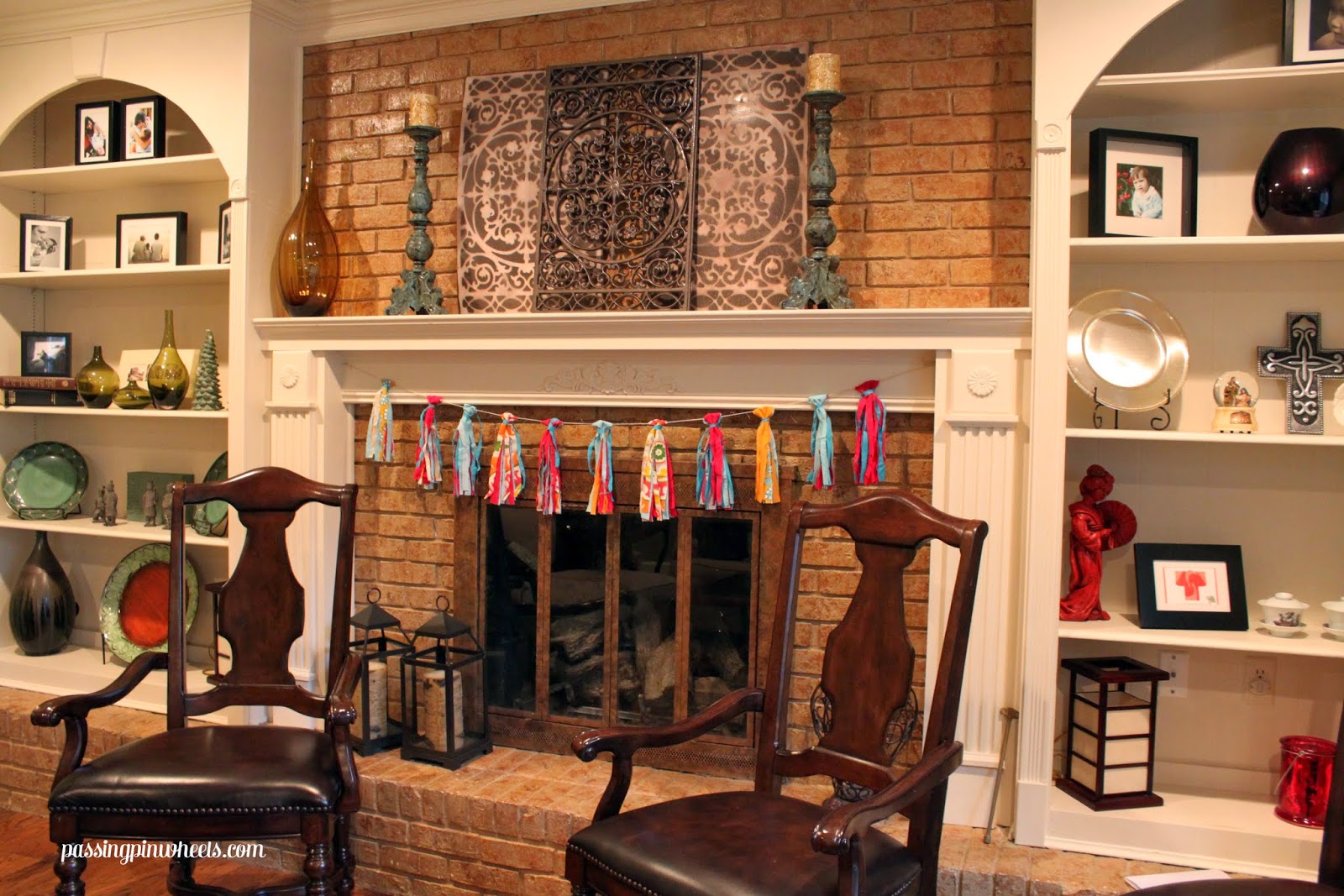 For our other activity, we played He Said, She Said. Before the shower, I asked Tamara and Landon questions and chose answers to put on the card. Without any context, I had the guests vote on who they thought I was quoting. The winner got Astronaut Ice Cream 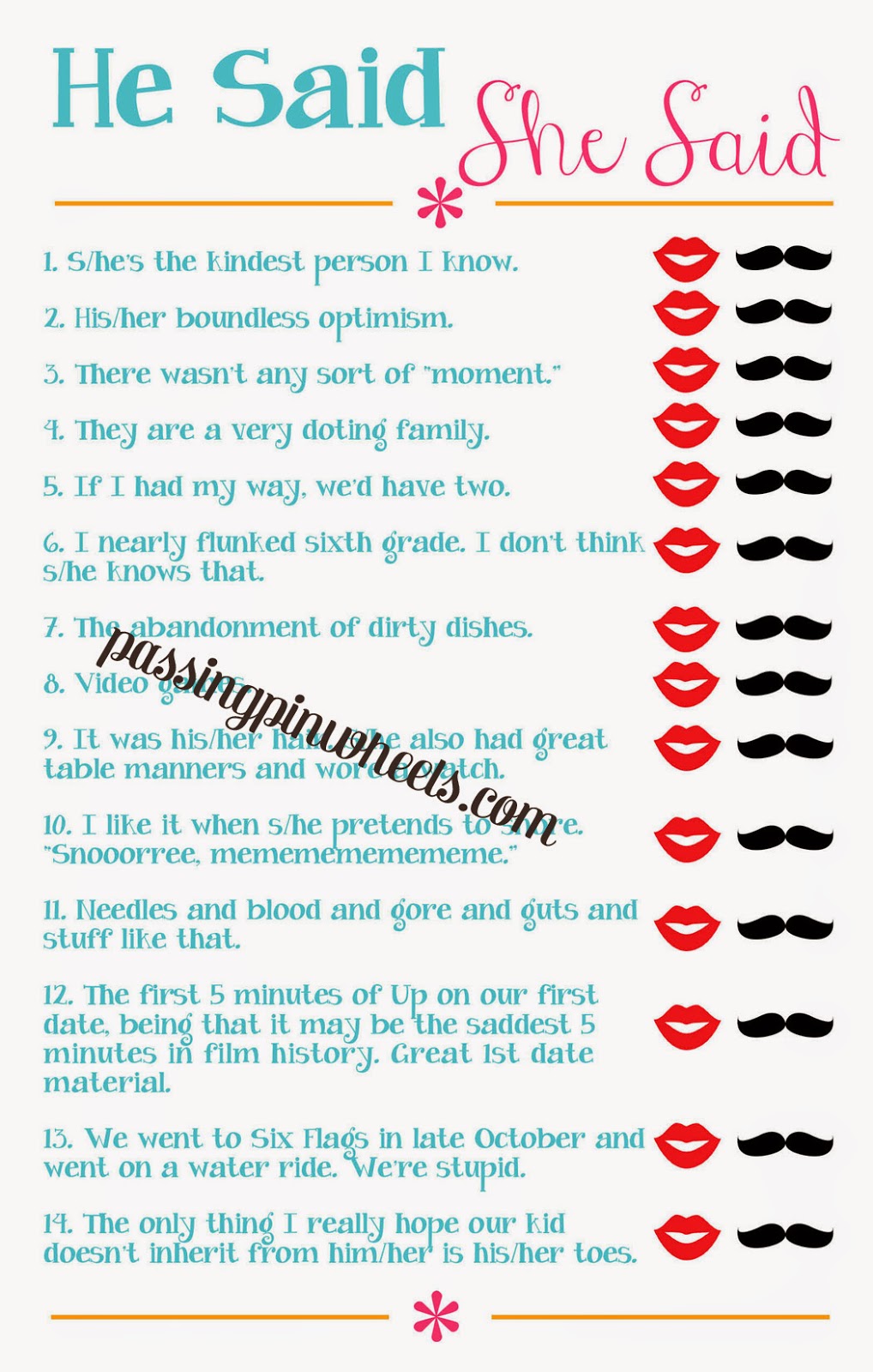 If you look on the table, there are lip and mustaches in glasses. I made those out of glitter paper. I printed mustaches and lip and traced them on the back of the glitter paper and then hot glued them to the sticks. Some folks liked them so much that they took extras home. Voting with the props was silly in a good way. Definitely a do-again. 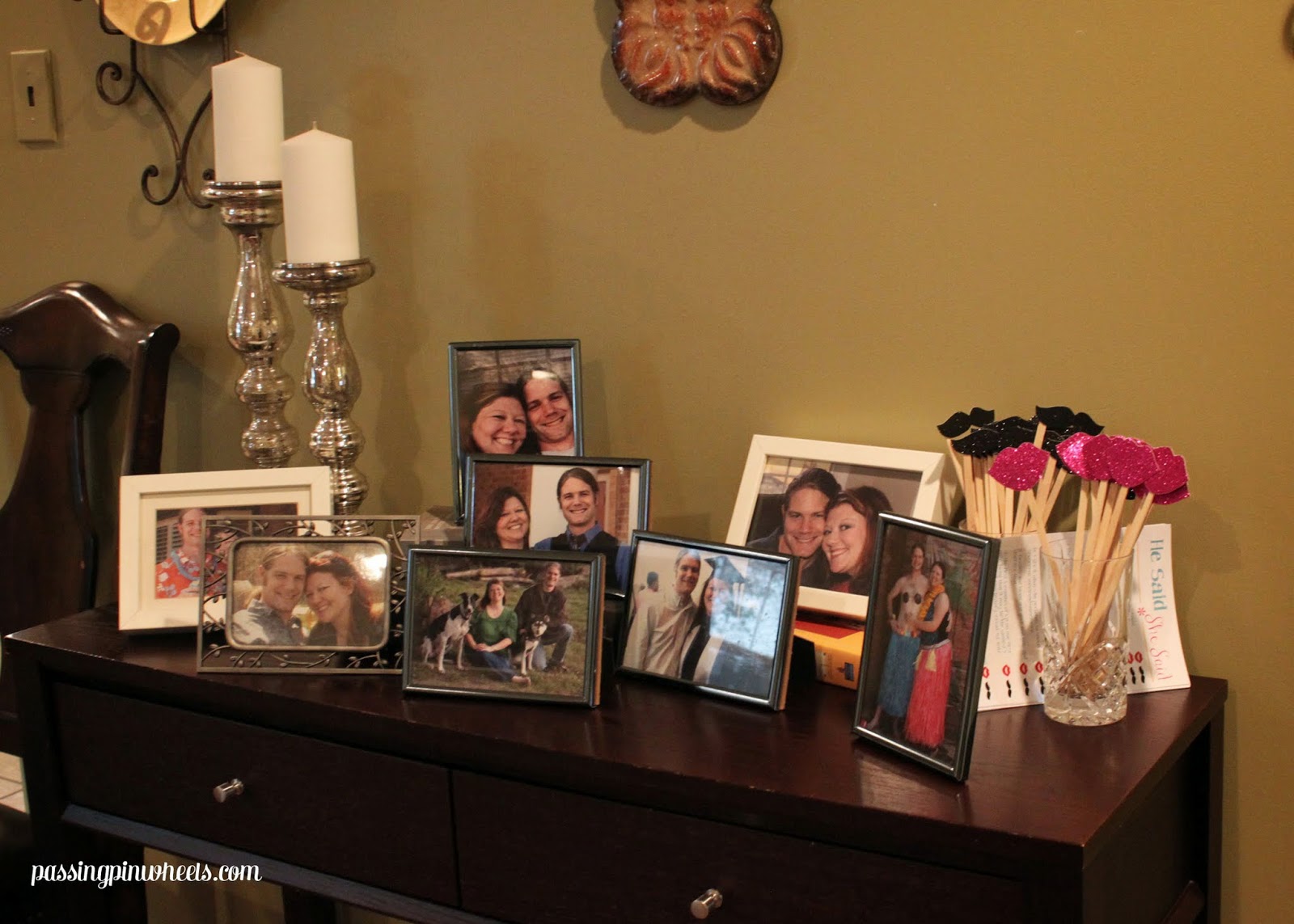 Other than nuts and pretzels, this was an all-dessert shower. We did DIY sundaes and root beer and beer floats. The beer floats were odd and most people chose to drink a beer and have a sundae but it was still pretty fun! This isn't my prettiest table. I feel like it could have been better but I might have had to push the table against the wall. I think something tall in the middle is what's missing. Originally I planned to put the ice cream bucket in the middle but adding the beer/root beer bucket made me reevaluate. 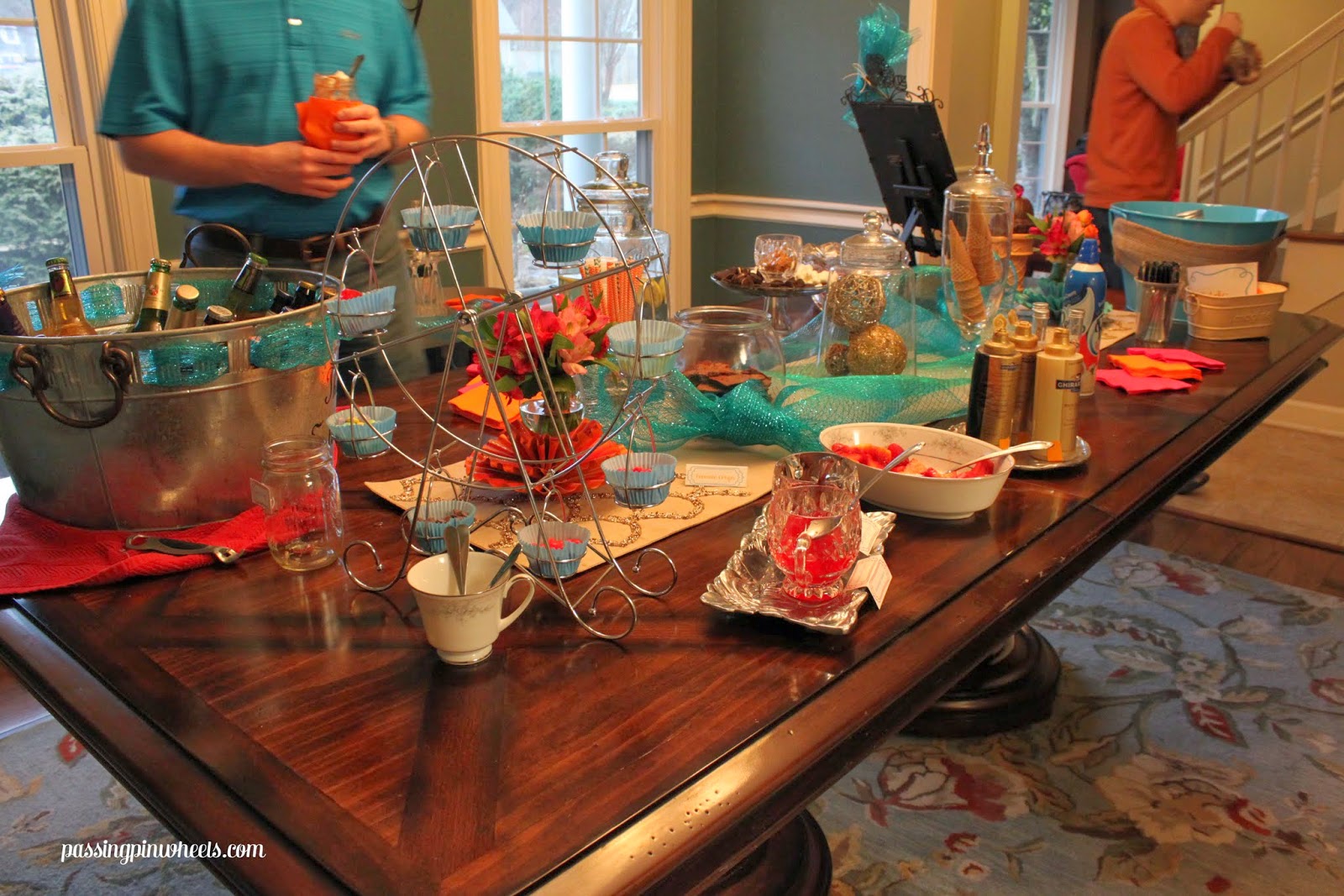 It looks better on the other side. I had fun with the apothecary jars. I've always wanted some and found them at TJ Maxx way cheap. They are on the dining room table now, filled with silver and gold woven ornaments. 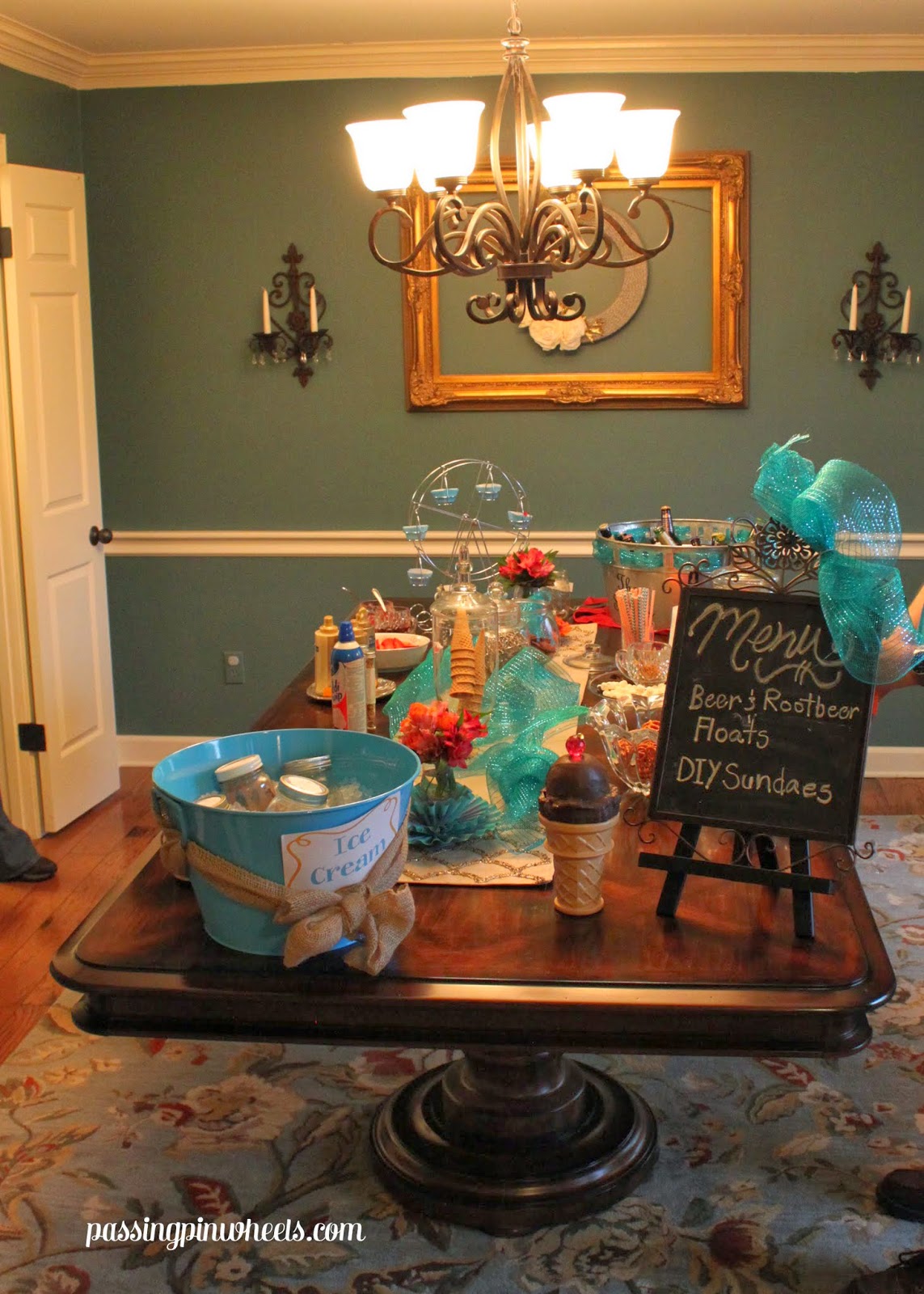 We had a fun afternoon! I wish I had more photos of the guests, other than the instant camera shots, but I think something was wrong with my settings when I gave the camera to Mike. They are all really blurry. So sad! But this one is adorable! Congratulations, Tamara and Landon! 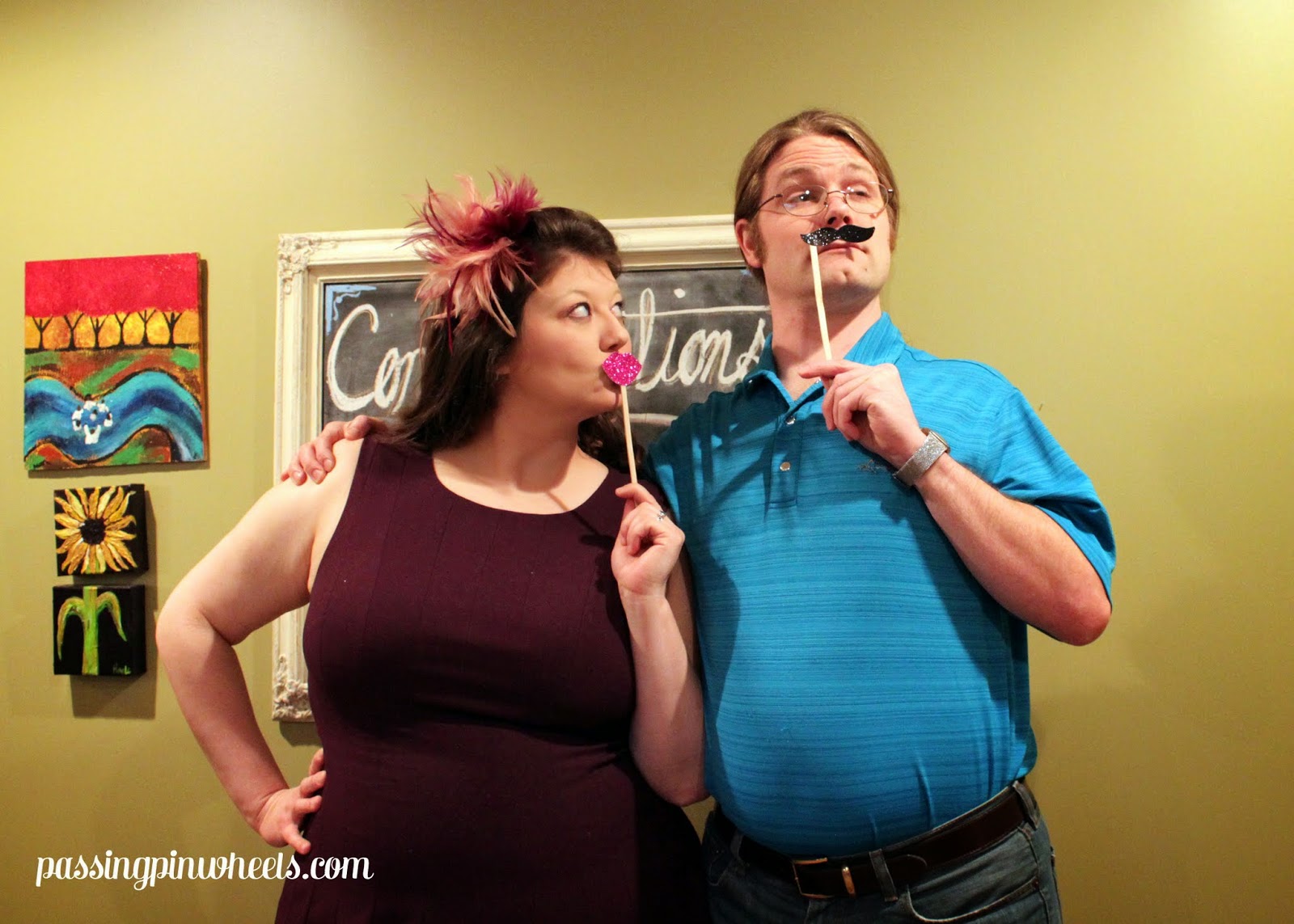 Tomorrow is Autumn's birthday and she's going to be seven--I CANNOT BELIEVE IT! In the meantime, I'm trying to get caught up on blogging...I have more martial arts material to share, 2 more wedding events, and I made Autumn an Elsa dress!! Here's a preview...just ignore my messy desk. 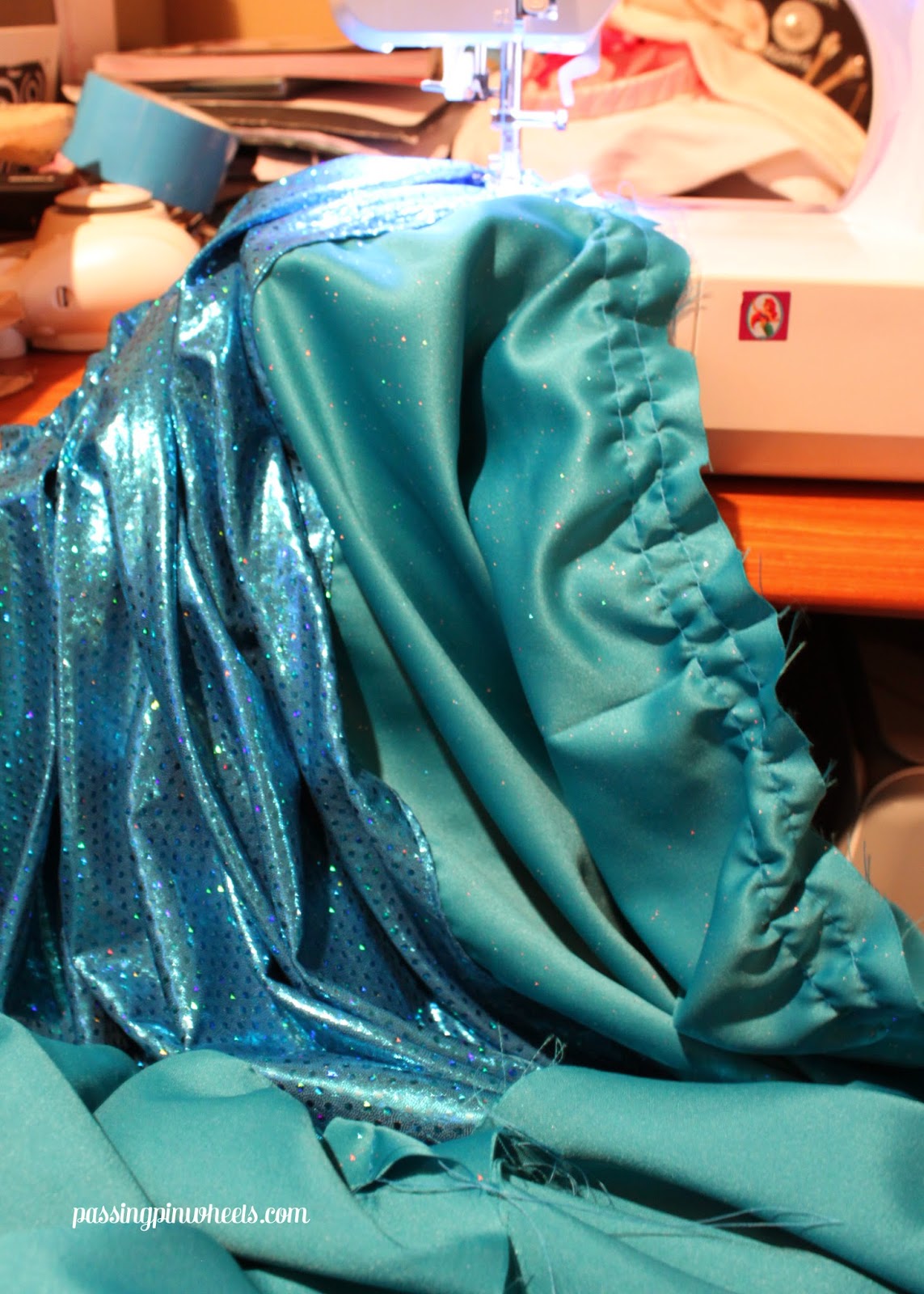 Posted by Sharaze Colley at 9:18 PM