Writing the title of this post reminded me of a text our neighbor sent that cracked me up. He asked if we couldn't have fit Spring into our Winter in Summer for a girl named Autumn party! I asked if her real birth date being in the spring counted! 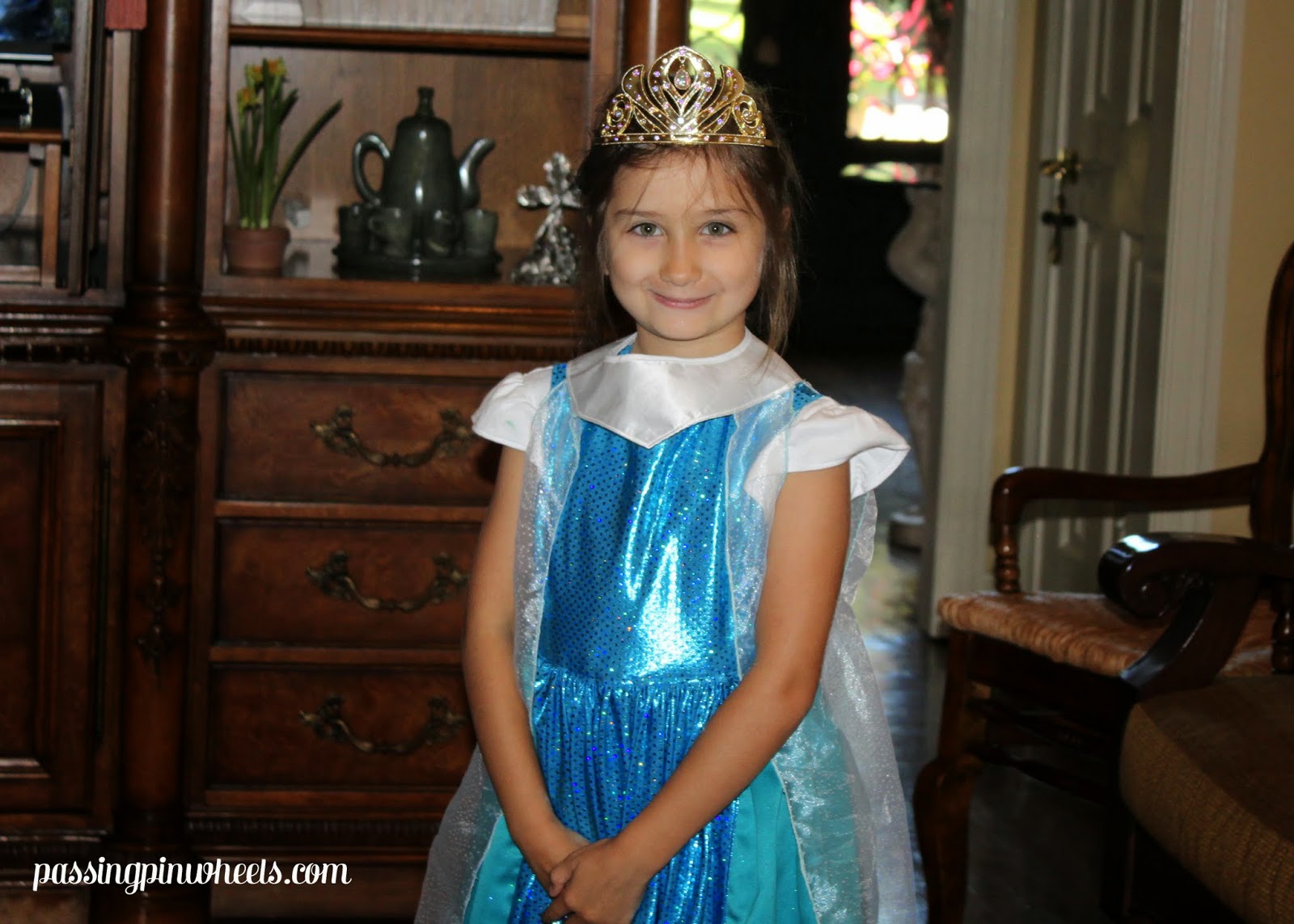 Anyway, we liked the idea of the "In Summer" theme but Frozen just isn't Frozen without blue! I thought ombre would be fun and Autumn liked the waves with the snowflakes worked in so our invitation was born! It's looking a little dark here but printed the colors are really vibrant. 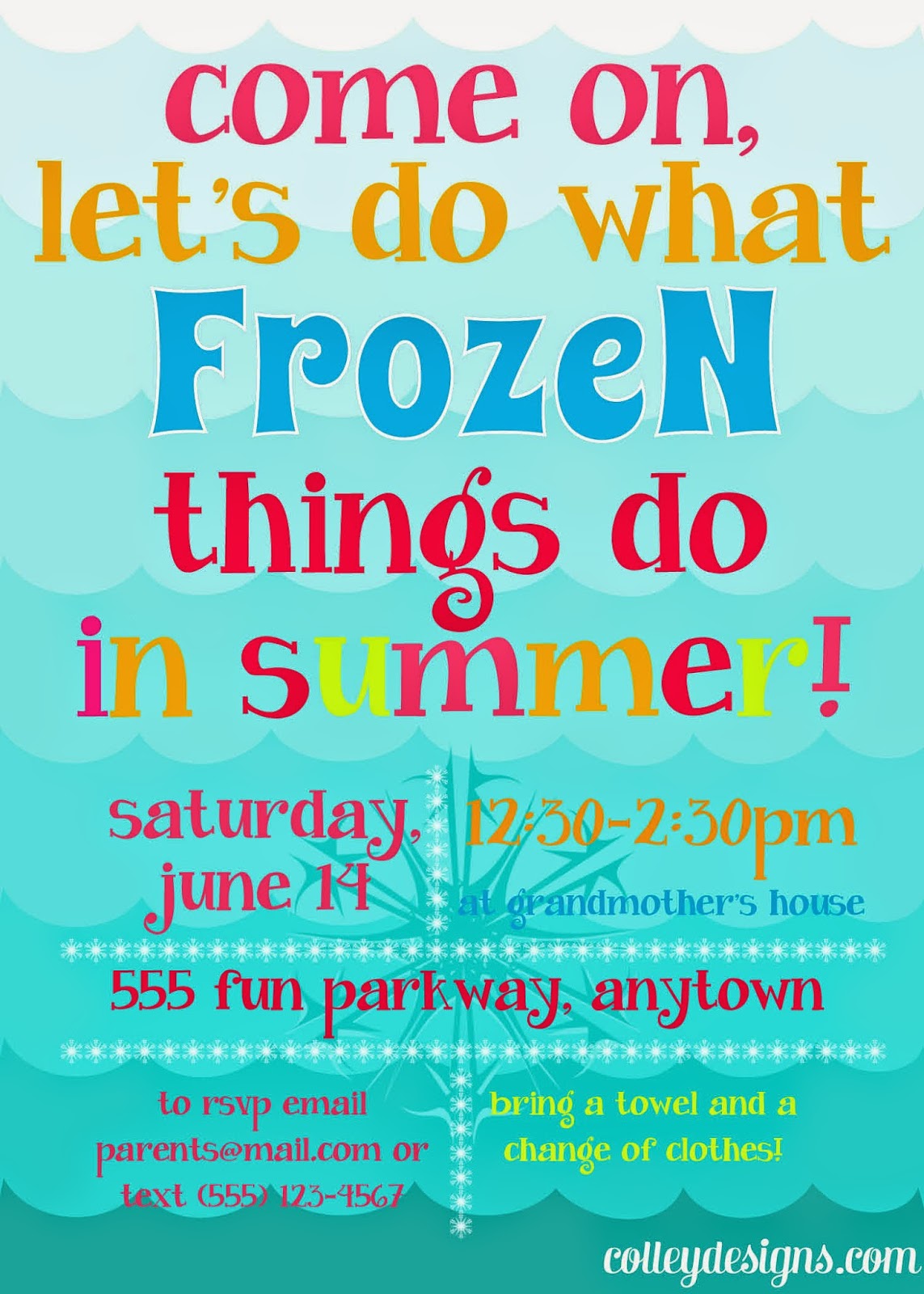 Like this! I wanted a different shape to the banner than the usual pennant I gravitate towards. The curves weren't too tedious to cut out, either. I know sometimes I come off like I do all kind of picky things but I rarely spend a lot of time sitting and fiddling with anything. That's why I never do any printables that are scalloped or overly intricate! 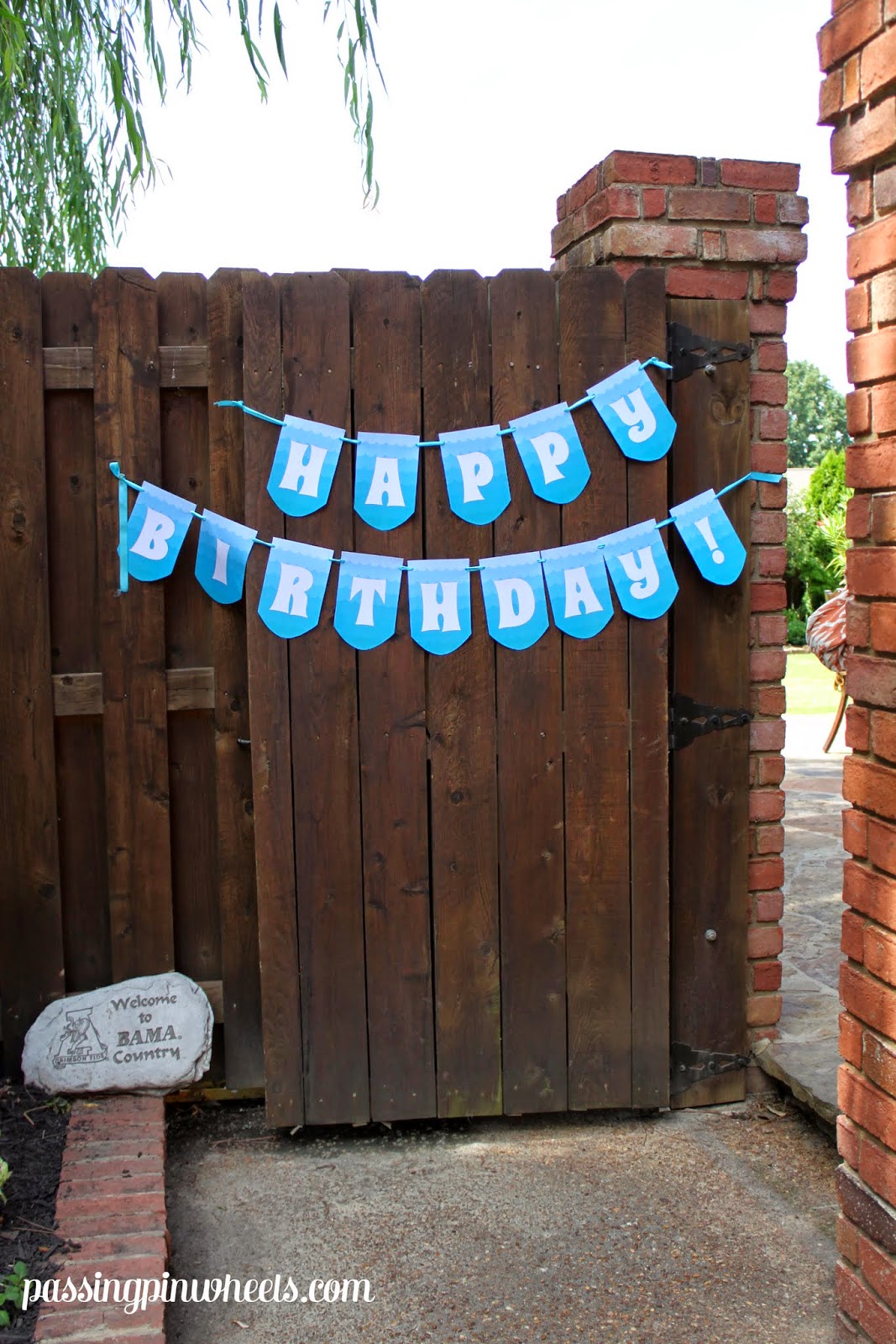 Lainey took care of the cake and she found this bakery in Southaven called Brown Baguette. The cake is lovely and Autumn absolutely went crazy for it but the amazing thing is the cake tasted fabulous. How often does that happen?? A pretty cake and not only does the cake taste good, but so does the icing? Not often. Too, I got lucky and I happened to find these figurines on the Disney Store site, if you can believe it. Until I decided to check one last time, they had been going to for something like $60 on Amazon! 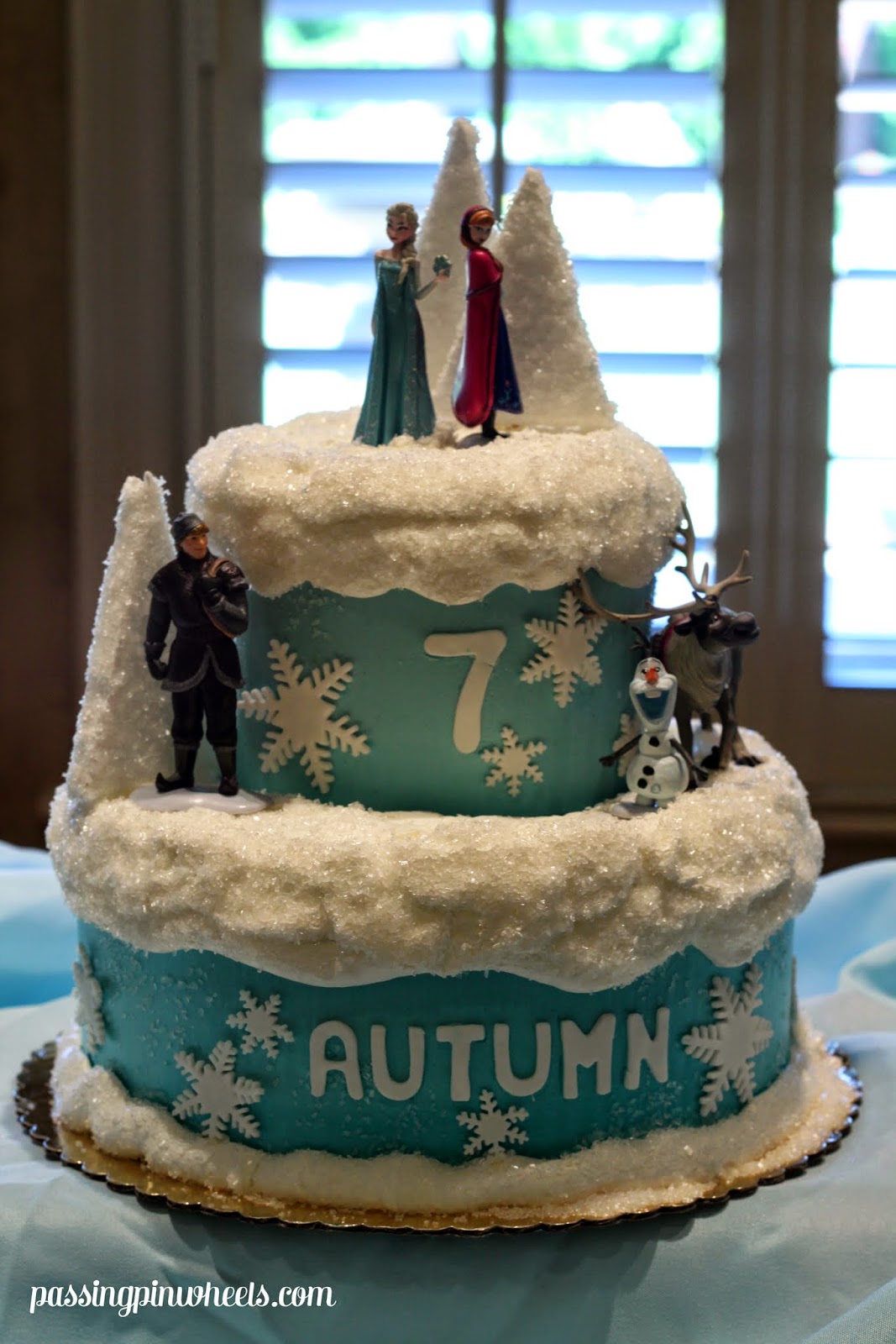 It's the perfect centerpiece for the table! We elevated it a touch with a casserole dish under the runner. I had so much fun doing all of the printables and, for some reason, it seemed less difficult and time consuming than in the past. The ombre theme was soooo easy and not just for making printables. For example, I picked up the three shades of tulle for the tutu banner across the windows and finished it in no time watching something on Netflix. It's tough to see the gradient because of the light but I promise it's there. 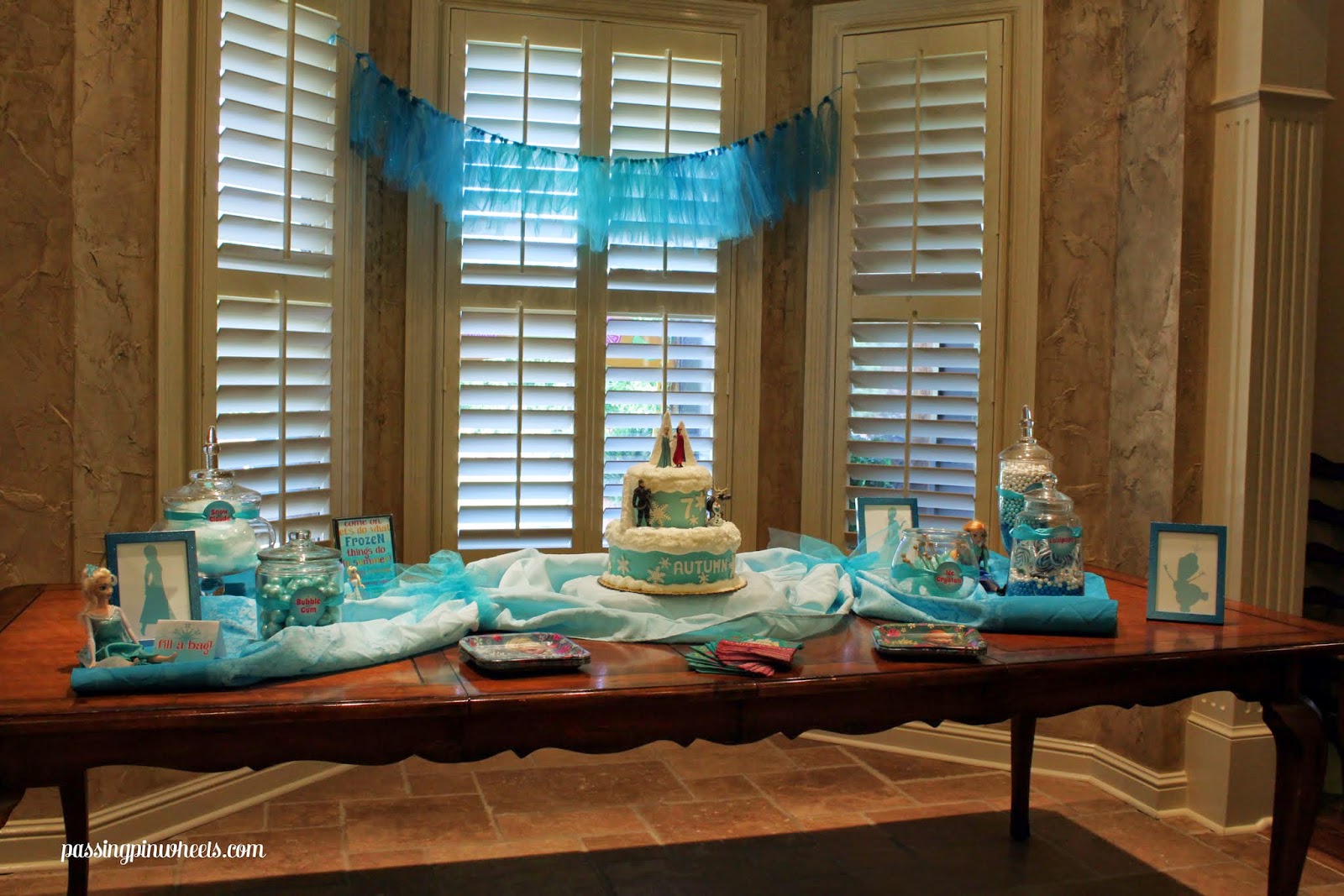 I had this great idea to get or make an ombre tablecloth and once I got the idea, I had to do it and justified it by thinking of all the ways I'd reuse such a tablecloth! I found an inexpensive tablecloth

and some poly iDye

. It did pretty well but without the drama I wanted. I know, kid party, but I couldn't let it go. Er. Pun not intended. I had some acrylic paint leftover from the playroom project and smeared it all over the ends. I started with a sponge and ended up putting on gloves and just finger painting. I like it. It wasn't the right size for the table so we tied it in two places with tulle and called it a night! 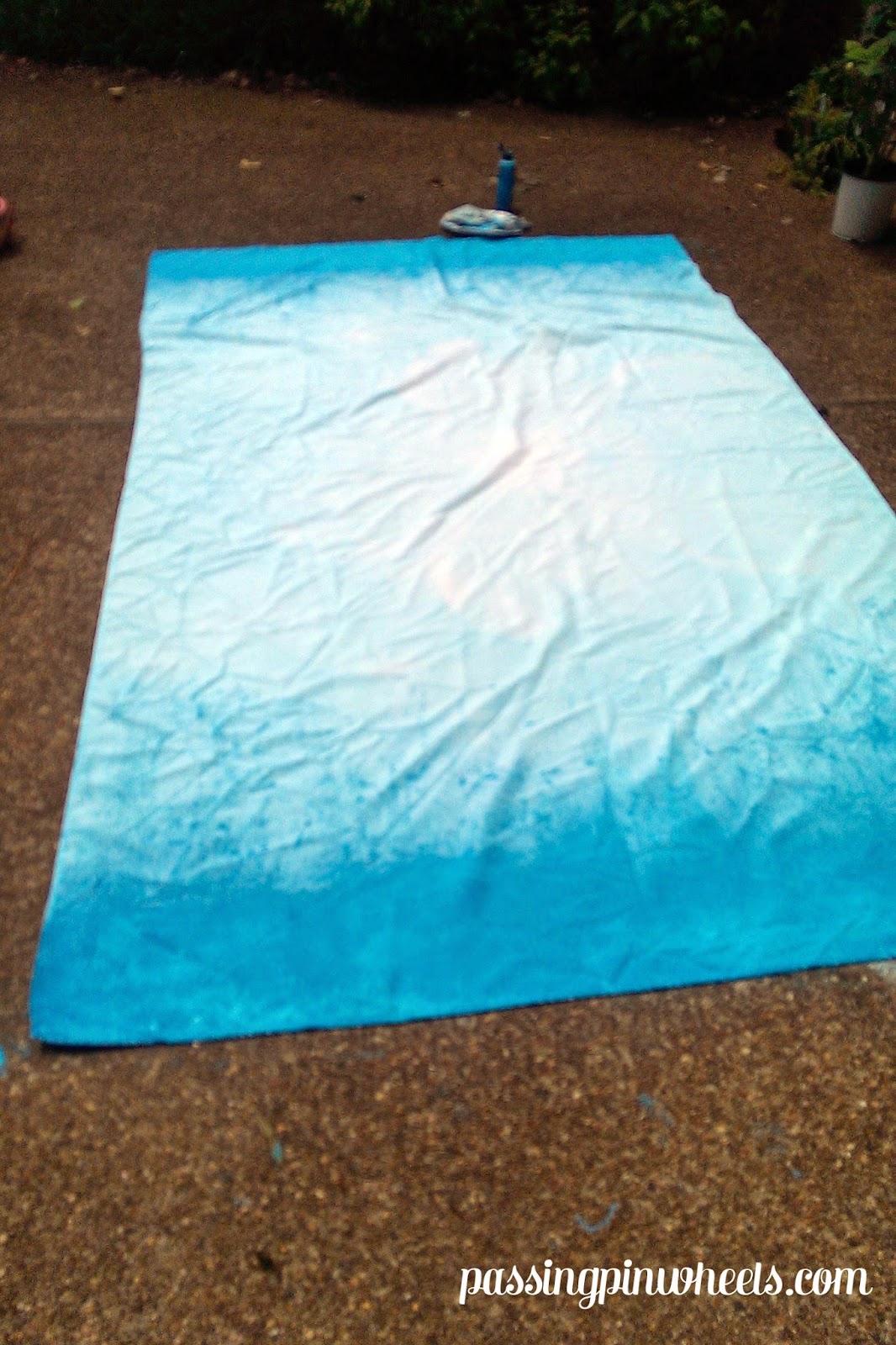 Another random project were the silhouettes. One of the parties I saw had these pretty nursery prints of the girls' dresses but there was no way I was going to pay so much for a party picture. I did the silhouettes in photoshop and found the LAST THREE of those blue frames at Hobby Lobby for $3 each. I will so use them again, especially since I seem to gravitate to blue for party colors. I got to reuse my feather wreath again and everything! 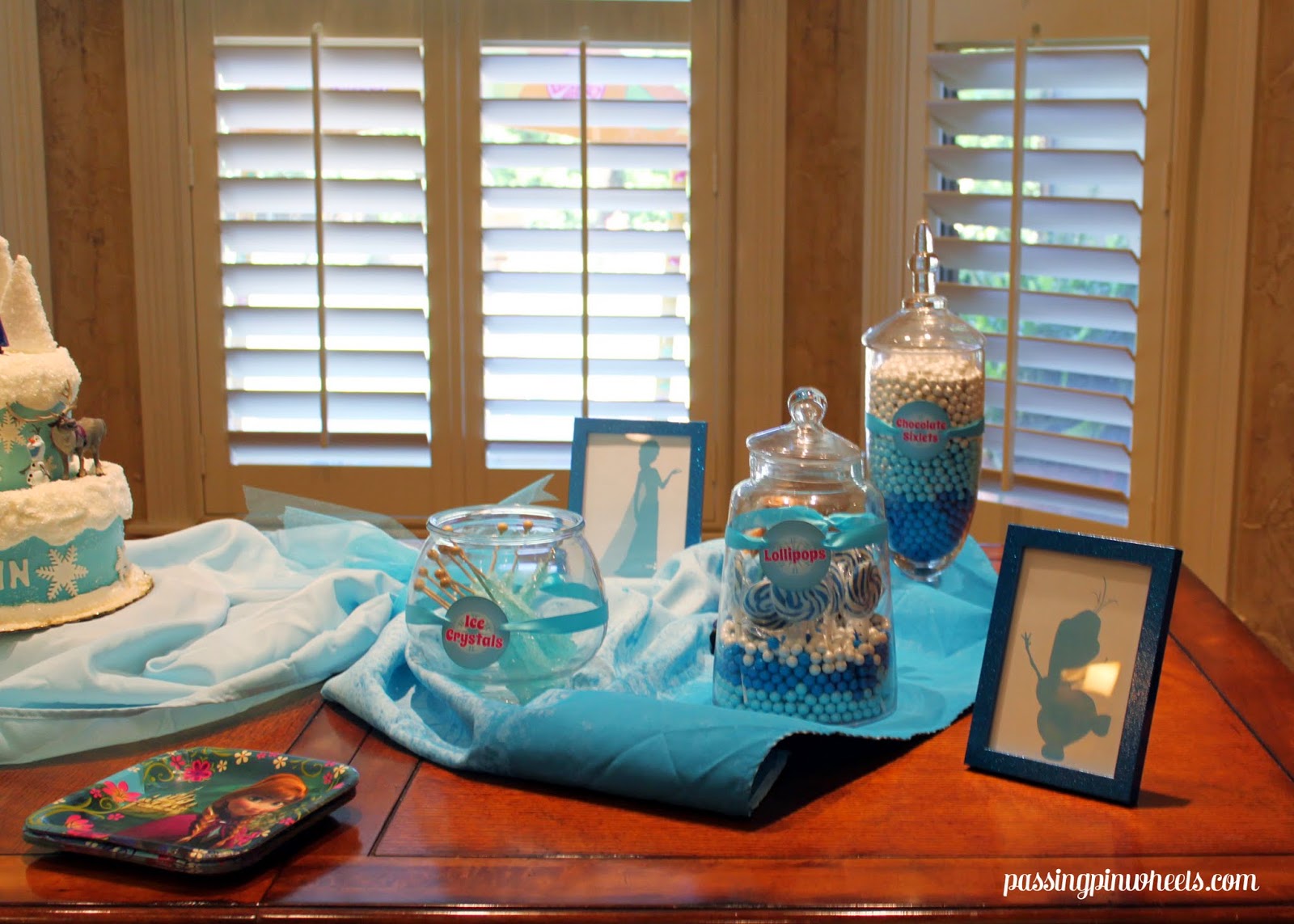 The candy came from Oriental Trading company and it was GONE when the kids were done filling their treat bags! I am so glad because last time we did a candy bar we had a ton of leftovers. I forgot to take a photo of the bags but I have one left over so I'll put it in the next post. Oh, and the candies I bought are on my Summer Frozen Party Pinterest board if you're interested. Over the last 6 months, we found a few Frozen toys and I incorporated them into the decor. By the way, did I mention I got a cotton candy machine

earlier this year? It was pretty funny, I really thought Mike would object but he said that it made me so happy it was worth the $30. Ha! We have used it for 3 parties and 2 get-togethers since March! 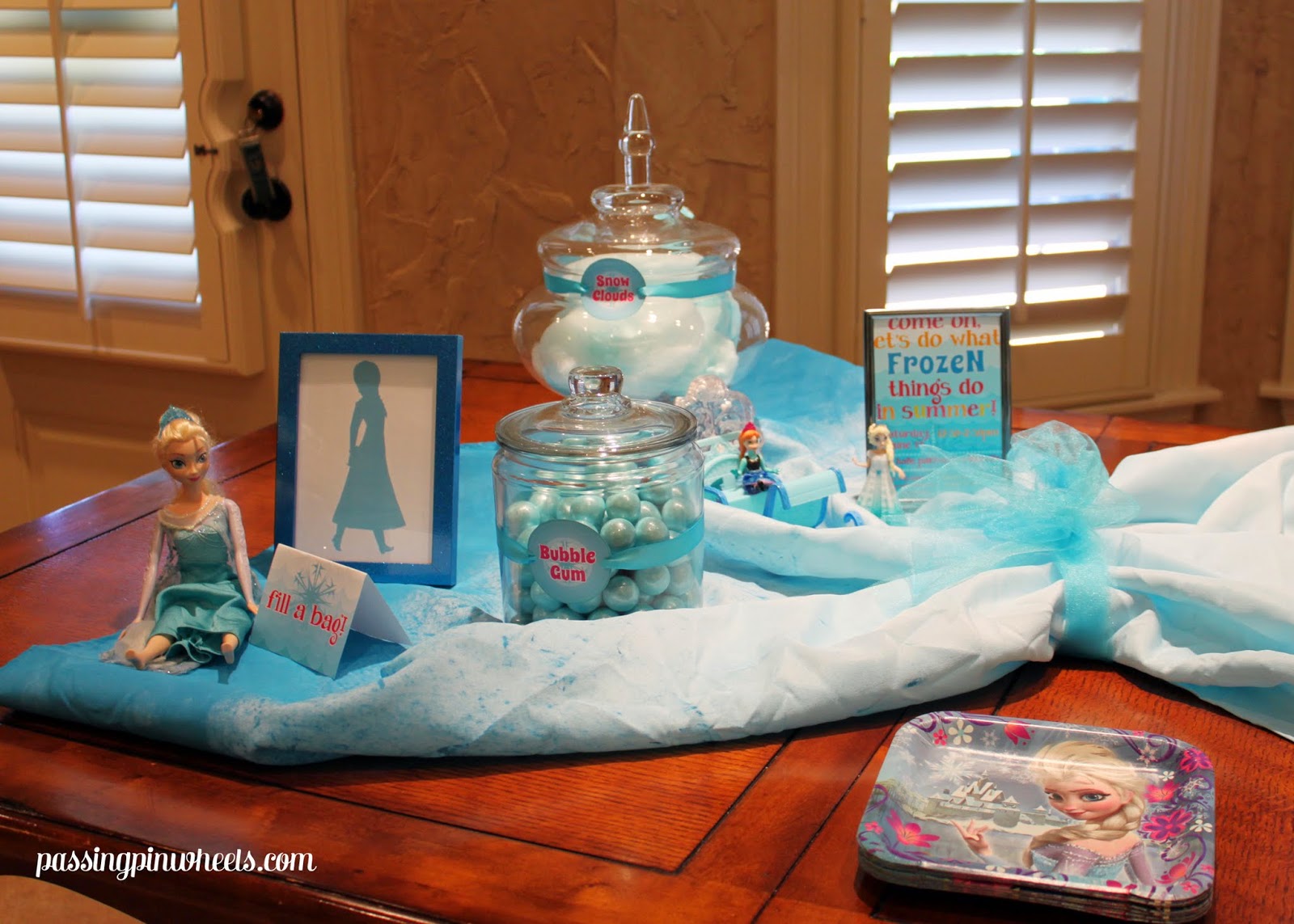 I promise I'm almost done with this post. But, I do have to tell you about this project. I brought some of Autumn's Frozen pictures and her bulletin board...which is made from a mirror I picked up on the side of the road!! I think it originally went on a dresser so I took the mounts off, painted it, and covered the mirror with batting and fabric that Lindsay gave me! After that, I hot glued ribbon and Autumn and I modge podged some clothespins with fabric scraps. I am so happy with how it turned out! It didn't exactly match the party theme but it was fun and Autumn got to make her own party decorations! Once the hearth was covered in gifts, it looked super festive. 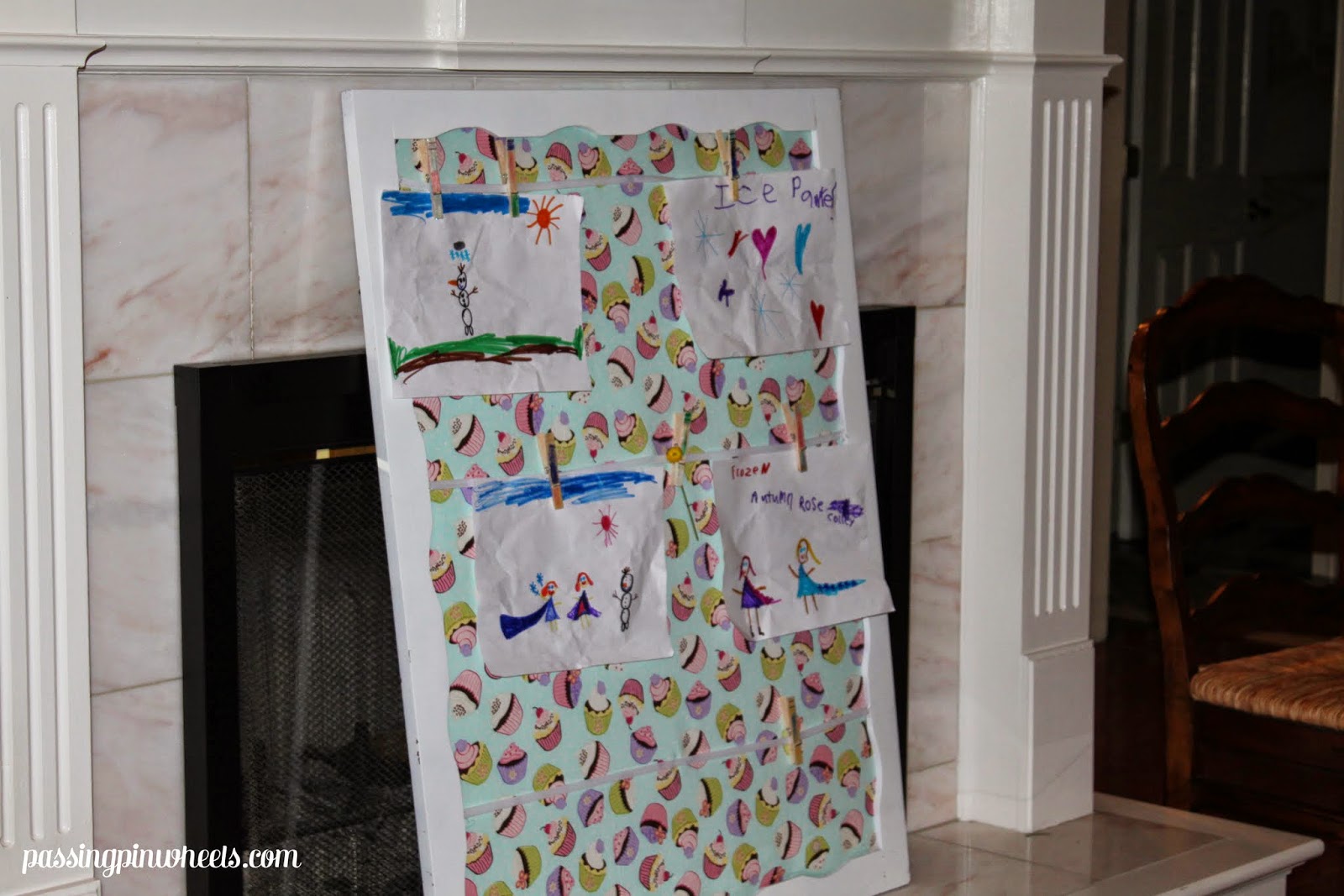 Well, that's the inside of the house! The outside was a little more Olaf oriented with picnics, a project, and some water play. Here's a preview of the outside of Lainey and Pd's house... 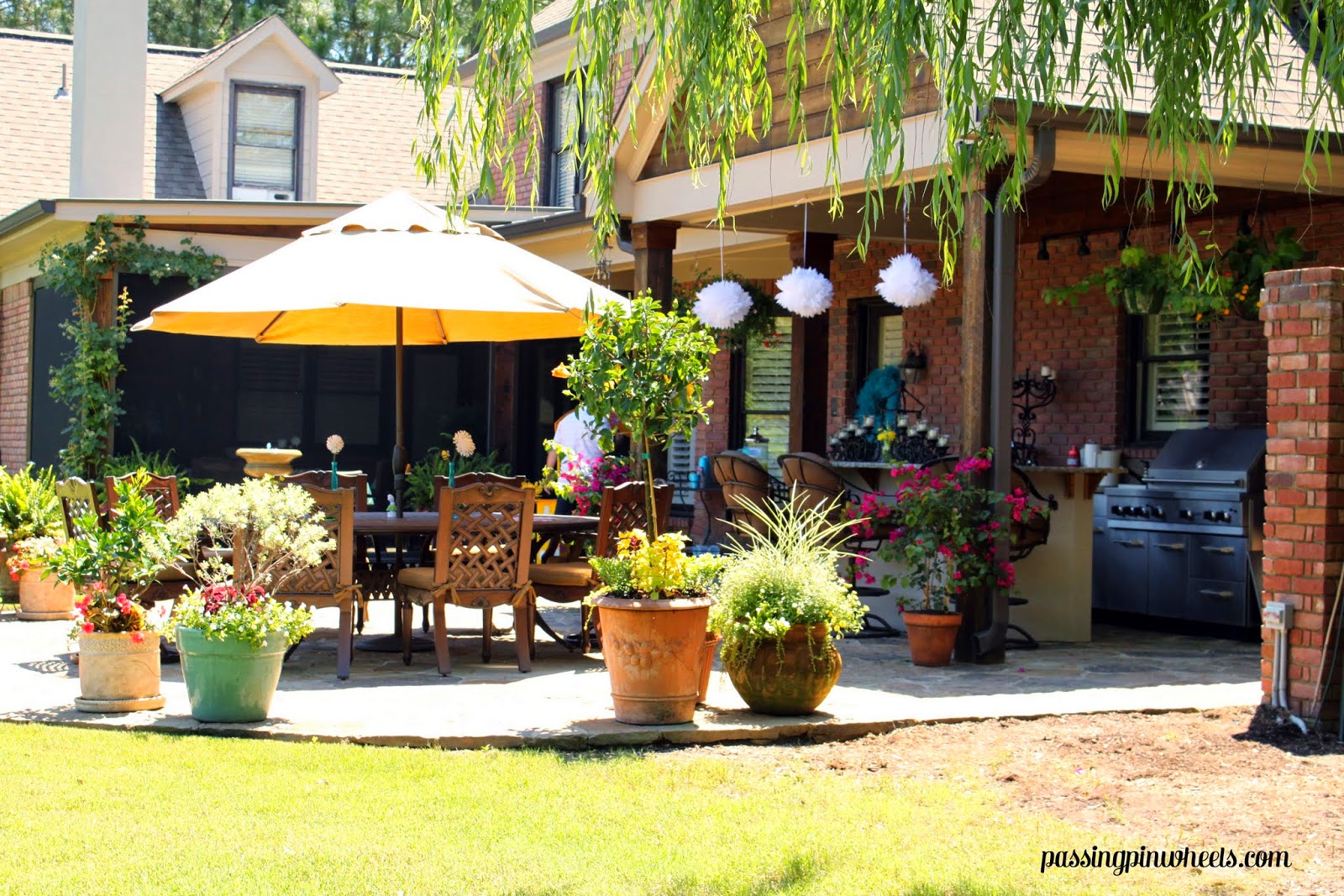 and a preview of the arrival of our special guest! 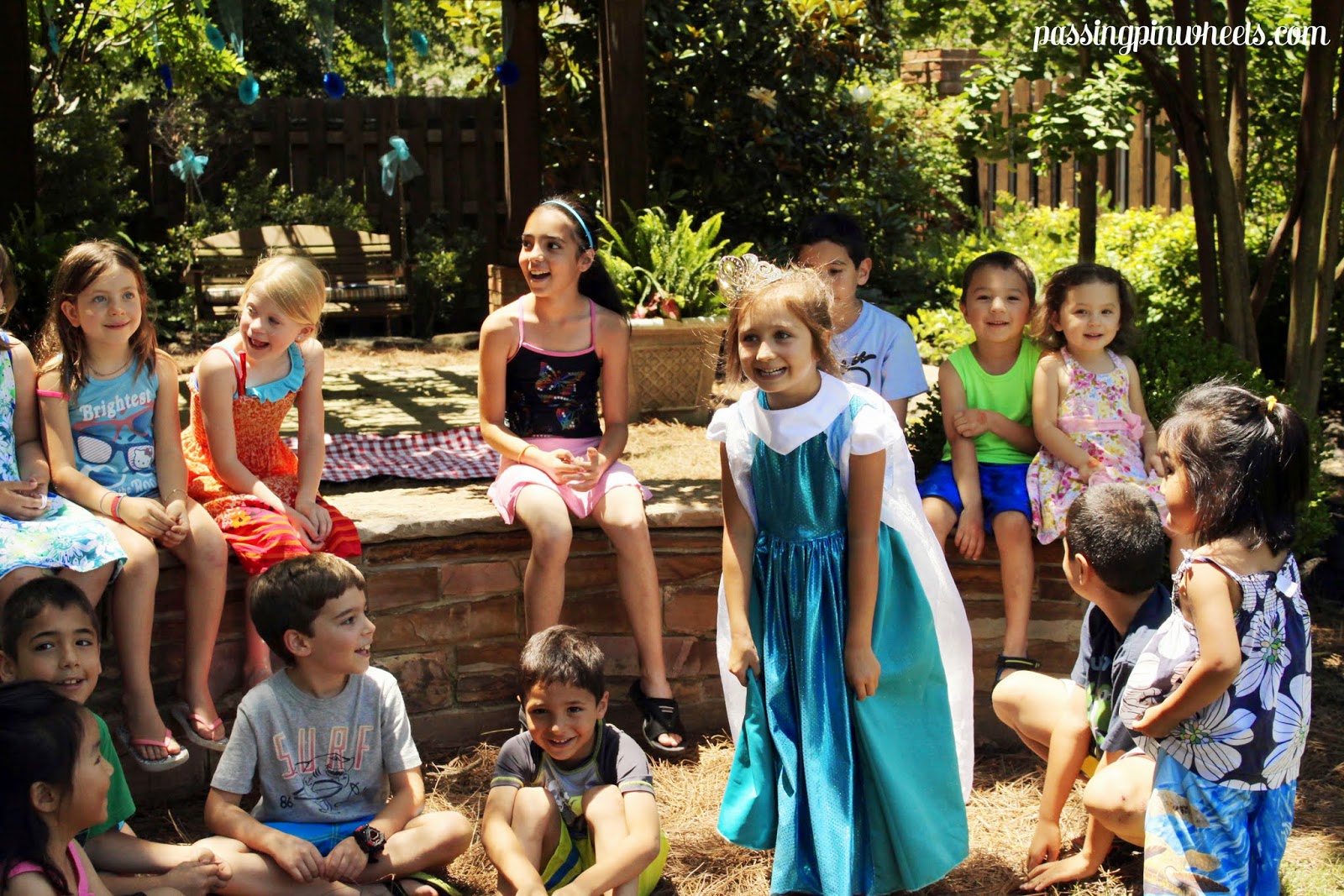 (I shared this on Made by You Monday at Skip to My Lou!)
Posted by Sharaze Colley at 9:23 PM