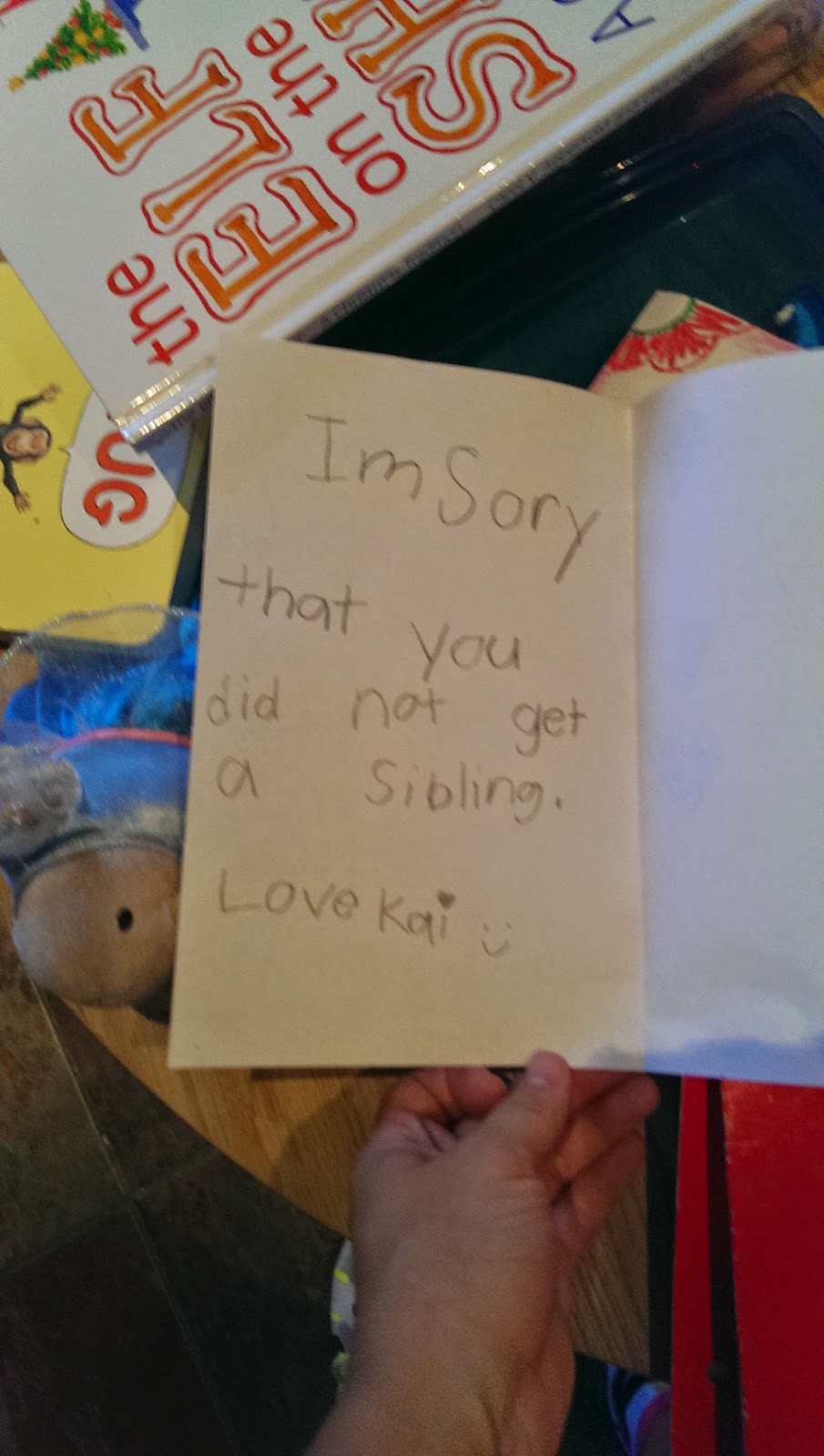 When we last visited the adoption topic, a few things were moving along slowly. Well, we're at a dead stop. A highly recommended agency in Texas accepted our pre-application and invited us to their orientation. We had been emailing back and forth on different elements of the full application process but we never heard back on a question we had about getting wet fingerprinted. After waiting a couple weeks, Mike called to follow up and they told us that they made a mistake and we were no longer invited to proceed any further with their agency.

I'm angry for a lot of reasons: from their "mistake" to the nearly $200 in fees that we never would have spent if they weren't so supposedly excited to have us as part of their program. Not to mention, why couldn't they have told us this sooner? Were they just going to ignore us until we gave up?

Mike, who is generally more level headed than I am, and some of our other friends--including Mike's dad--are on the side of waiting and seeing what our other options are. I'm more on the side of this being it. How many more times do we hear no before we believe it, you know? No to Garrett. No to the two adoptions that fell through. No to however many other expectant parents who looked at our profile with the other agency. No to the THREE families a lawyer in Florida showed our book to it. Maybe it isn't meant to be. Maybe the answer is no. Nanny, incidentally, made it clear to Mike that she is also of the don't do this anymore opinion. I'm not surprised because she and I are very similar.

Our social worker called after I emailed her to tell her the agency changed its mined. She feels like we have a lot of options. I don't know, though. We've had trouble with people like our former agency and Autumn's former occupational therapist giving us the material we need. At one point our social worker lost our entire file somewhere in her house and we had to reproduce everything we had given her up to that point. Thank goodness for scanning, for real. She did, by the way, find the file. So even the home study which is chugging along is doing so in fits and starts. 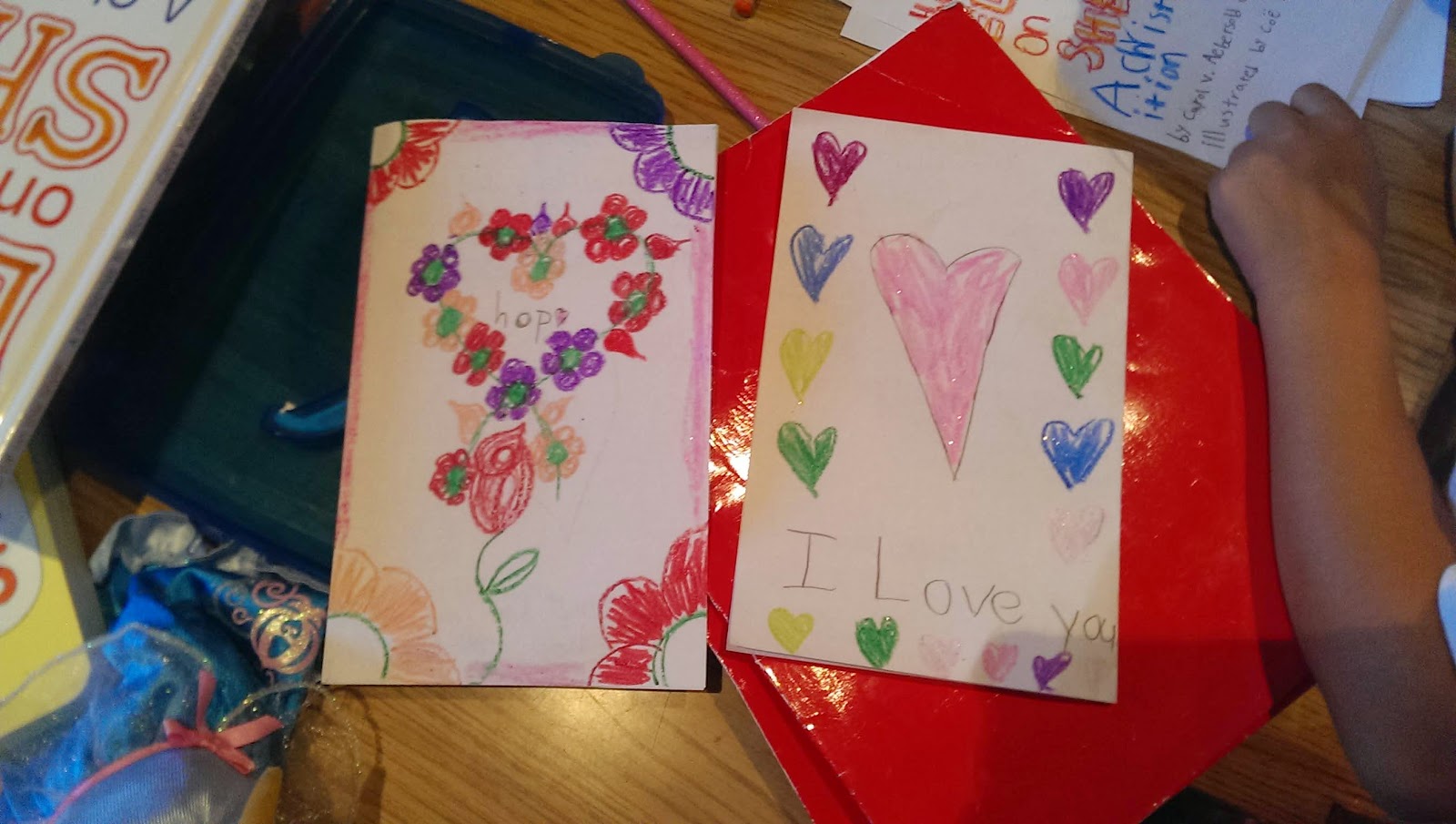 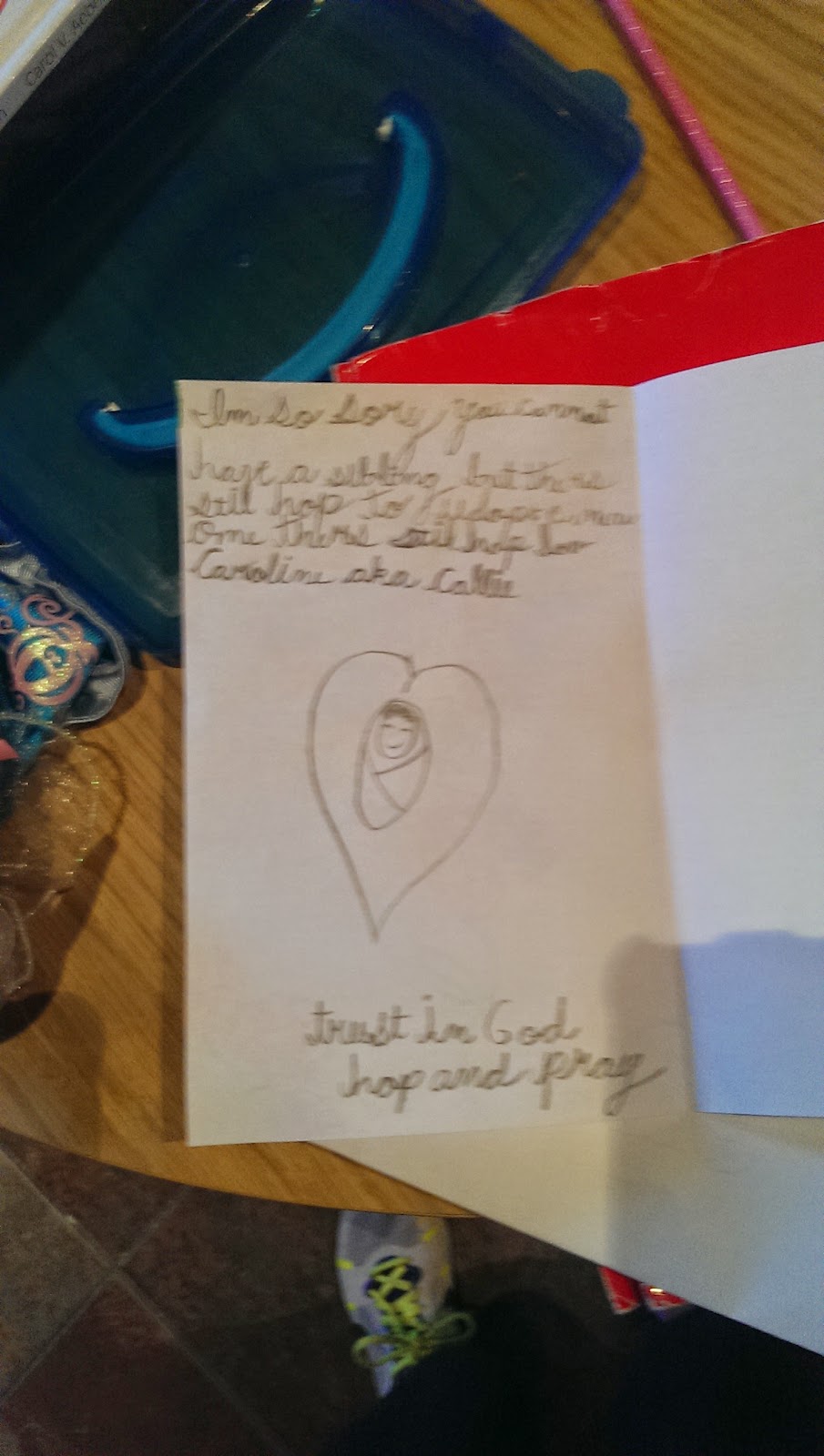 Autumn cried for a long time today. I think it's one of those things where all the hurts get all balled up into one, big hurt and...you know. We were on our way to class when we found out. I took it harder than I expected. I spent this entire process believing it wouldn't work out in the end but...I don't know, I can't help but hope. Or, maybe it's like Autumn and I'm responding to the entirety of the sadness and not this small piece. Anyway, I'm sure my reaction didn't help Autumn's. I pulled it together pretty quickly, though, so I am hoping I didn't contribute too much. I didn't want Autumn to just mope in the corner all night so I had her participate in class. I explained the situation to the parents in some detail and students in minute detail because I am, if nothing else, open about what's happening. Some of the sweet kids in the class made her cards after class while Autumn did her homework. The I Love You note goes with the message at the top of the page. The Hope note goes with this message: "I am so sorry you cannot have a sibling but there's still hop..." Maybe. Maybe not. We'll see.
Posted by Sharaze Colley at 7:24 PM