You guys aren't going to believe this. I just found out that the agency that was putting together our home study is closing in December. Mike and I kind of went "WHAT?" And then laughed because of course. So, we're considering the private, domestic adoption officially stamped NO. It doesn't mean we'll never adopt but that particular path is no longer an option. I think we're just going to pay for what they have done so far and call it a day.

In other news, I'm almost finished turning our nursery into a guest room! I really didn't want to paint the room so I looked up yellow bedrooms and liked the idea of adding navy. Here's my inspiration room. When I'm finished, I'll post better pictures. So far I've sorted most of the debris in the corner. Some of it I am donating and some I am saving for the garage sale so if there are any baby toys, clothes or items you are looking for, let me know and I'll see what I have. I converted the crib to a bed and it looks pretty good. I moved it out of the little alcove and moved the dresser over there so I can make that space a sewing area. I want to put my cloth stash in the dresser. I got a short people desk and chair, too, so I have a more ergonomic sewing position. I haven't decided what to do about the wall decor so if you have any suggestions, I'm game! 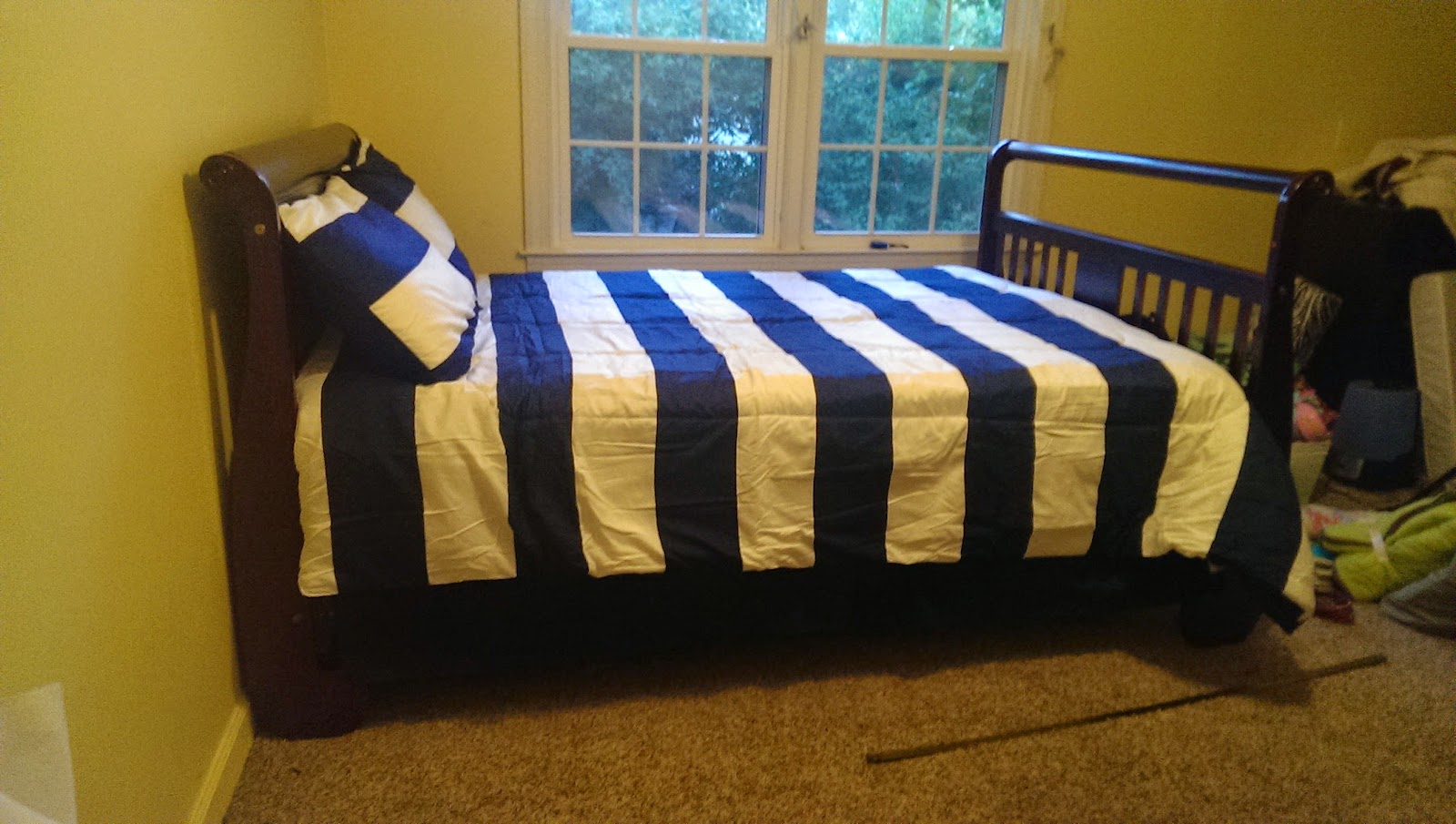 I usually don't write about going out of town but I'm going to this time...I leave at the end of the month to go to California. I'm finally going to test for my black belt in Aikido! It's pretty scary and expensive but I am excited and everyone has been really nice and supportive both at my school here and out west. There are a few moves I have struggled with in the aftermath of my surgeries but it seems like my fitness is coming together at just the right time. I posted this on Facebook yesterday and thought I'd share it here, too.


We also had a great time on Halloween. We had another Not A Party (because I didn't do printables and invitations and other formal things) and had chili, soup, and hot cocoa for the some friends both new and old. A few friends came and ate on their way to other events. We had several friends stay most of the evening and we had an adorable trick or treat crew. The best thing we did was put a fire pit in the driveway. We gave out candy by the fire pit and let the kids roast marshmallows. Even Mike had a good time although he didn't want to be photographed! 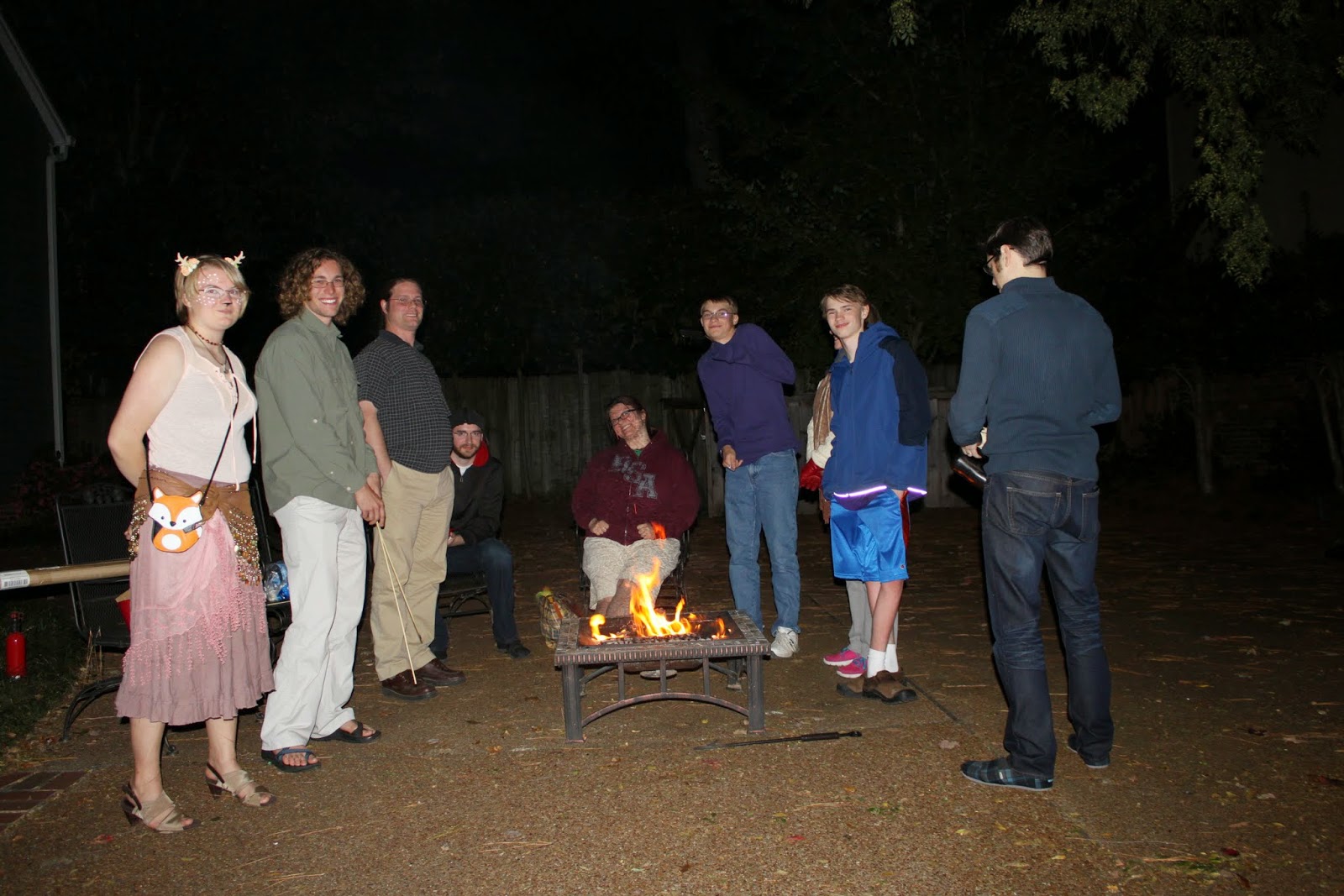 This photo is from Zoo Boo but it's a good one of me and my new hair AND Autumn's Doc McStuffins costume. She was so cute! Before our Halloween Not A Party we went to see Penny at her job at the hospital (we couldn't go a year without seeing Penny!) and Autumn got 2 pen lights and some medical tape. You would have thought Autumn got her medical license she was so excited! I love it.

I made my own costume. I was Toph from Avatar the Last Airbender! Autumn and I tried watching the show together over the summer and made it through a few episodes. She wasn't feeling it (although I caught her water bending in corners) but when I started making my costume, she wanted to watch Toph who doesn't show up until the second season. She absolutely fell in love. Saturday night we watched 4 episodes and Autumn laughed and laughed. I had to catch her up on some of the story but it hasn't been too bad skipping a few episodes. Autumn looks way grumpy in this photo but it's the best one of my outfit. We had costume week at the dojo and Autumn wore her Elsa dress to ballet. Along with 60% of her class. Seriously. Autumn came out of ballet and said, "I'm glad I am not Elsa for Halloween because everyone is Elsa." Although, funny enough, one of the trick or treaters we walked with was also Doc! 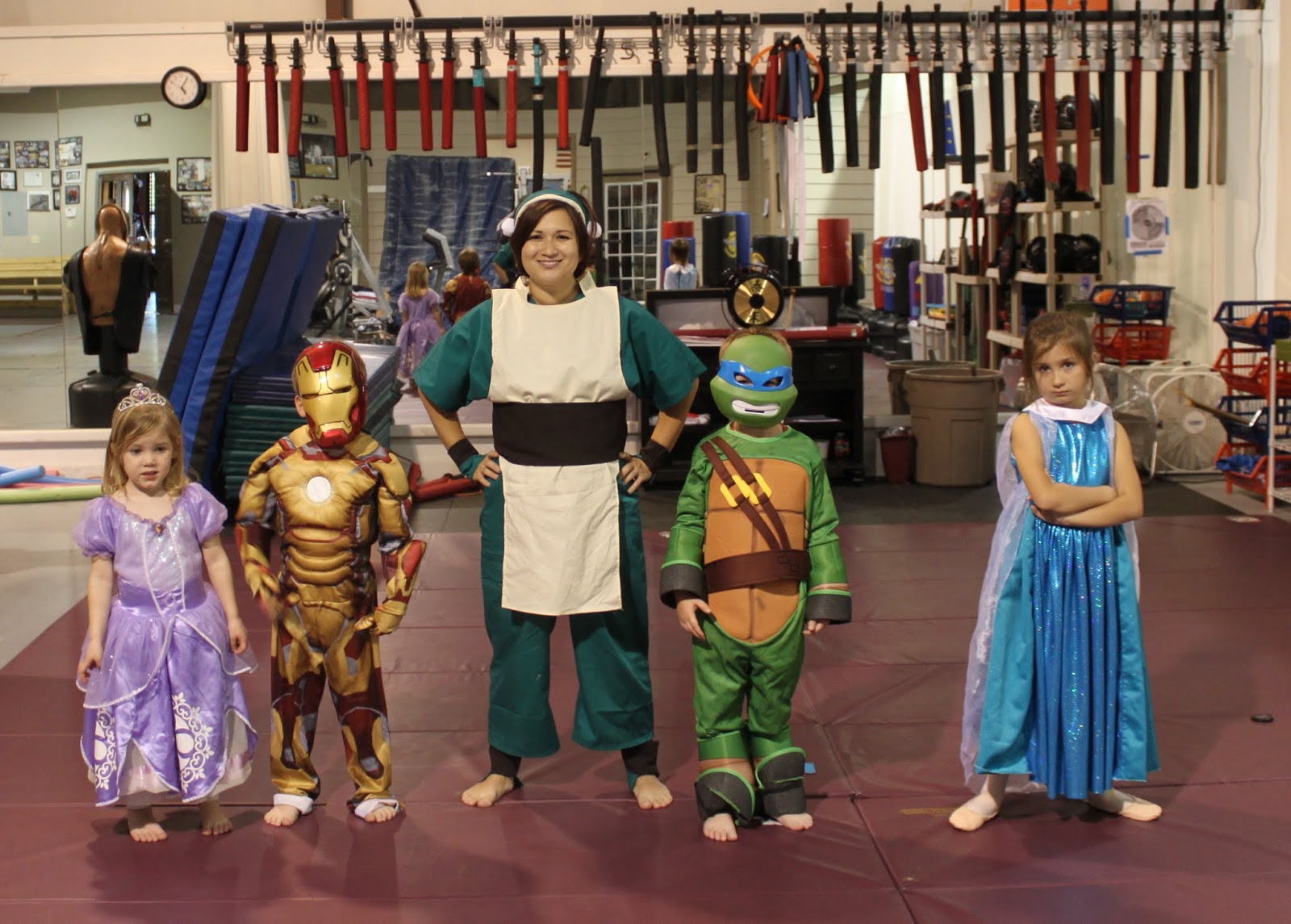 There are a few Toph tutorials out there but I might add mine because I did a really simple costume that still came out really well. It took some figuring and I cut out two tunics because the first one wasn't right. If I ever cosplay at a convention, I think I would do a few things differently but for the dojo and Halloween night, this was fun!

I think those are the highlights of the last couple of weeks. My life is going to be pretty boring for a bit while I train, train, train but hopefully I won't disappear again!
Posted by Sharaze Colley at 8:44 PM