Now that the holidays are past, I thought I'd finish up the touring posts of my trip! I think I mentioned that Mike, Autumn, and my mom came along. My mom stayed the whole time but Autumn and Mike were with me Friday through Tuesday. Well. Saturday. We arrived in California after midnight Pacific time. Saturday we went to Big Basin with our friends Shang, Lisa, and Lily. Sunday and Monday we wandered downtown San Francisco around my class schedule. We went to the Golden Gate Bridge Park and only saw a fraction of it in the time we had. We did get to see all of the Japanese Tea Gardens which was pretty amazing, even in winter. 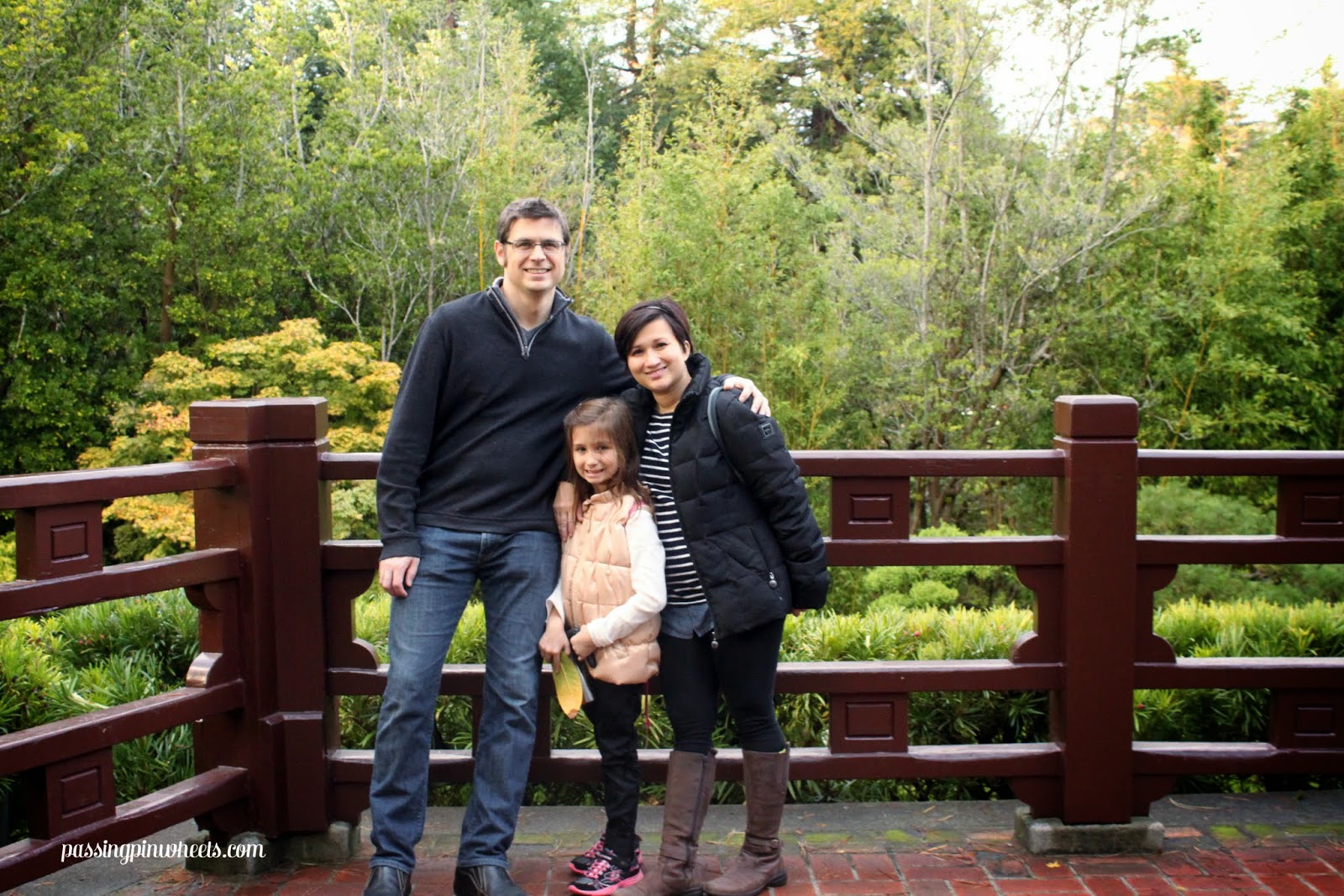 Of course, we had to see the Golden Gate Bridge. We found out that it is not, in fact, red. It's international orange! Autumn got a bridge ornament and an international orange color pencil at the gift shop. She collects snow globes and the gift shop had *the* coolest fog globe. We bought her one on the sly and gave it to her for Christmas. It's a little goofy to mention something like that but I've seriously never seen a snow globe that was so pretty. The real Bridge was cool and so were the places to explore nearby. Autumn especially enjoyed the earthquake simulator. Next time, I'd love to walk some of the trails and maybe see Alcatraz. 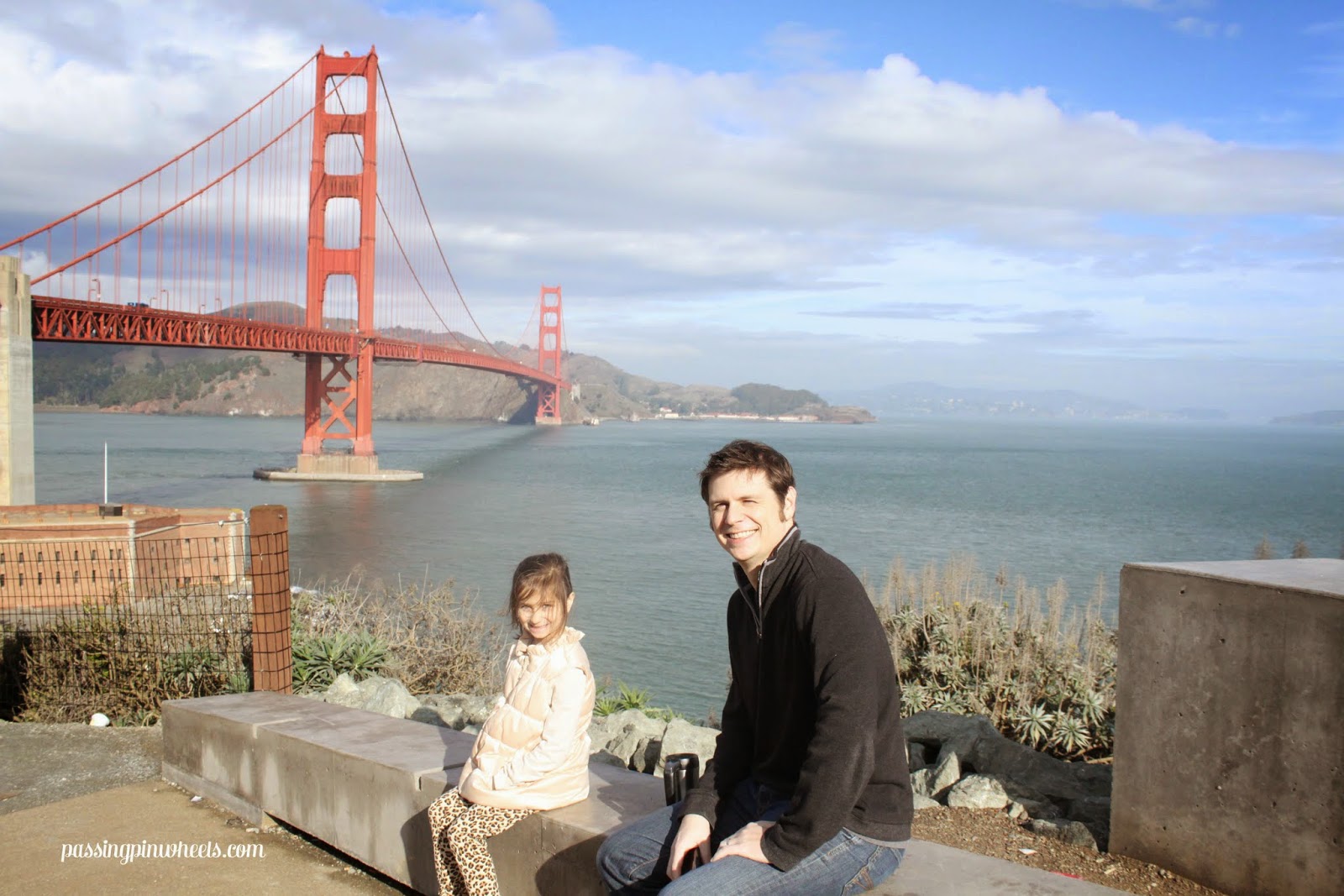 Autumn liked the mystery of this tunnel. And I like this facial expression! It ended up being a really short tunnel to some old battle earthen works and walking trails. You could see the bunkers where people would enter to work the cannons and guns along the way. I wish Fort Point was open when we were there because that would have been really cool! 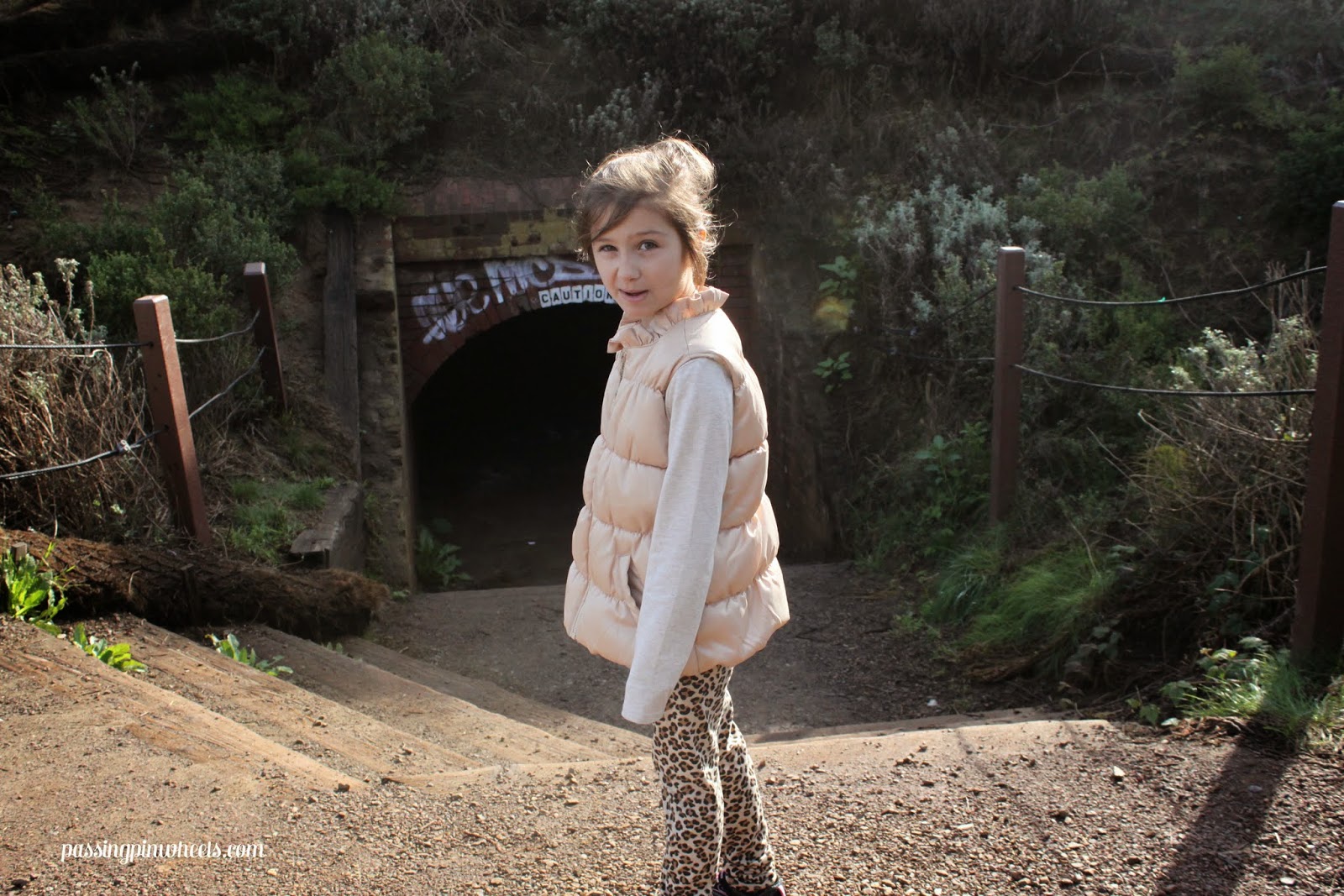 While we were in San Francisco, Autumn missed a few days of school. I decided that we could do work anywhere but a trip to San Francisco would be worth missing the class time. Her teacher was great and gave us everything Autumn needed to stay caught up. I sent her teacher this photo and she wrote back not to make Autumn work too hard! It turns out I was right that it wouldn't be terrible to miss the first part of the week because last week Autumn came home with a great report card for that 9 weeks! 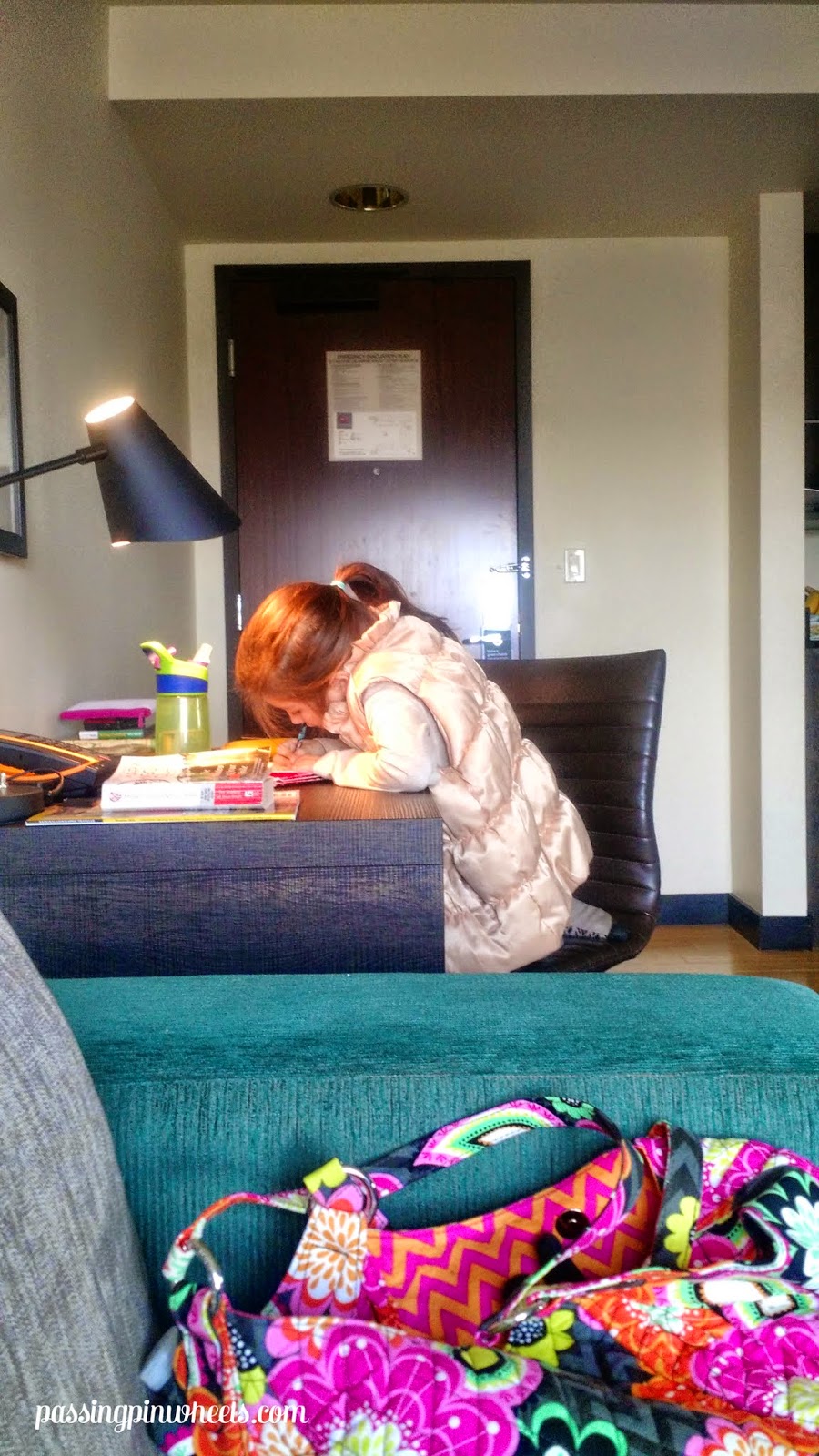 Oh, and it was funny because our hotel was near a lot of companies whose product we use. Logitech was on the same street and and every day on the way to the dojo, I passed Facebook's headquarters! 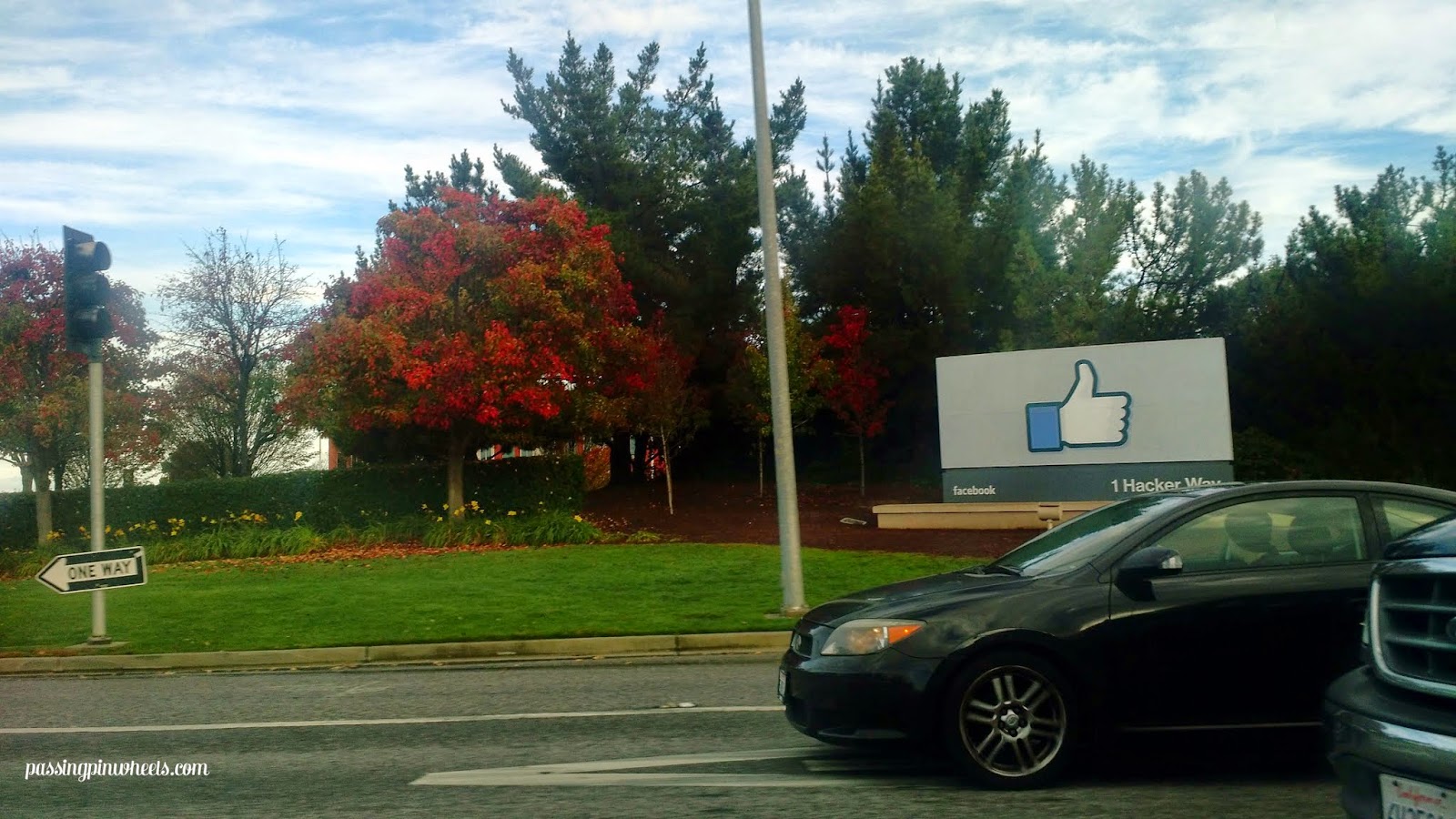 I don't think we had a terrible traffic experience although parking wasn't very fun downtown. Fortunately, all the times I needed to get to classes, the traffic was always heavy in the opposite direction. I was feeling pretty good about it all until Monday night when there was an accident on the bridge I had to cross and I was on the bridge for almost 2 hours. People were turning off their cars and getting out to visit each other! Many of my California friends said that was my official state welcome, especially since I could see my exit! 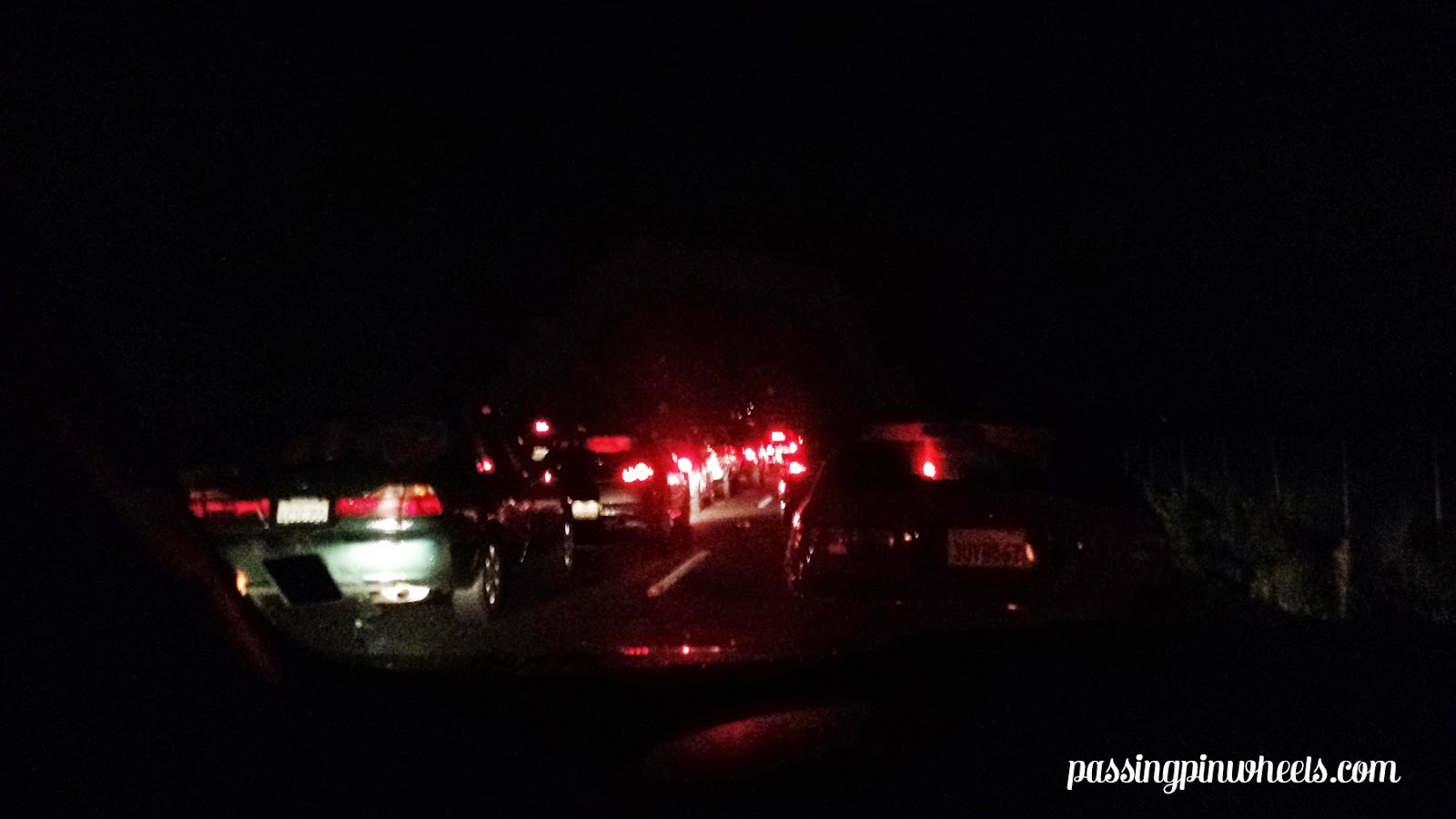 This is a really grainy photo but isn't it fun!! We went to Stanford on Monday so I could attend a class with Hayashi Sensei (far right) who was on my testing panel and has been kind enough coach me through all of this. She, Adrienne (next to Hayashi Sensei), and Victor were invaluable and I couldn't have passed this test without their help. As it was, I passed with good remarks rather than just squeaking by which is fantastic considering I had 5 training days to clean up and make sure I was within the testing standard. It absolutely wouldn't have happened without folks, and not just the ones I mentioned, taking time before, during, and after regular classes to guide and polish me. It's funny, all the things I thought would be a problem for me...weren't, ha! Hip throws weren't too bad and I was worried about that. But a couple things I thought I had down were a little too far off of what they like to see which is mainly a function of our school being out of touch (literally) for too long. 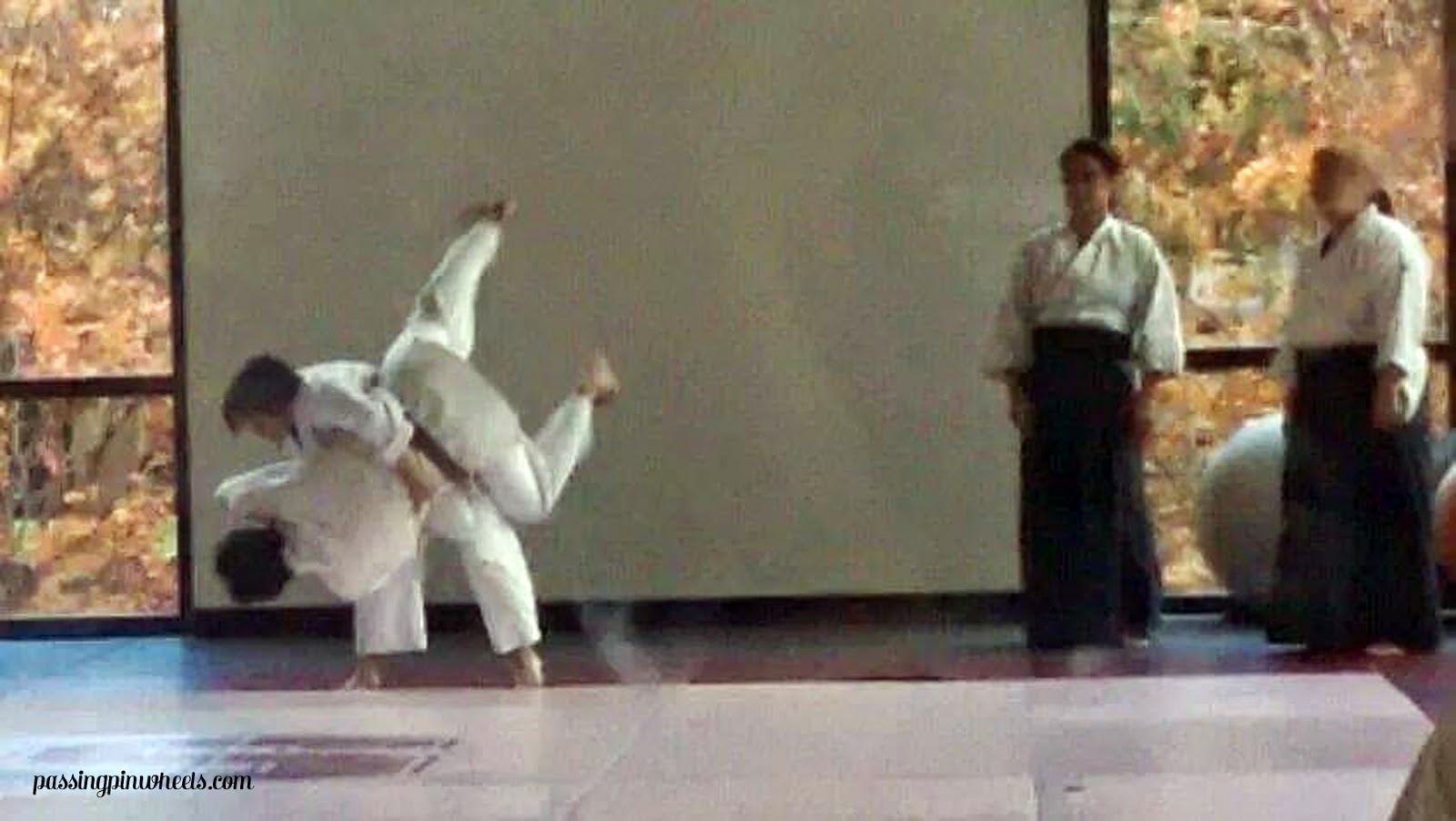 The day after our Bridge, Stanford, and American Girl Store visits, Mike and Autumn headed home. It was hard saying goodbye to them but I knew that they would just be bored because, with the exception of a visit to Chinatown, I pretty much ate, slept, and trained. One afternoon we had this pretty rainbow. I didn't catch it on my cell phone but it was a double! I don't really believe in signs, we were burned too many times with positive looking things during our attempted adoptions, but I did choose to take some encouragement from the pretty sight. 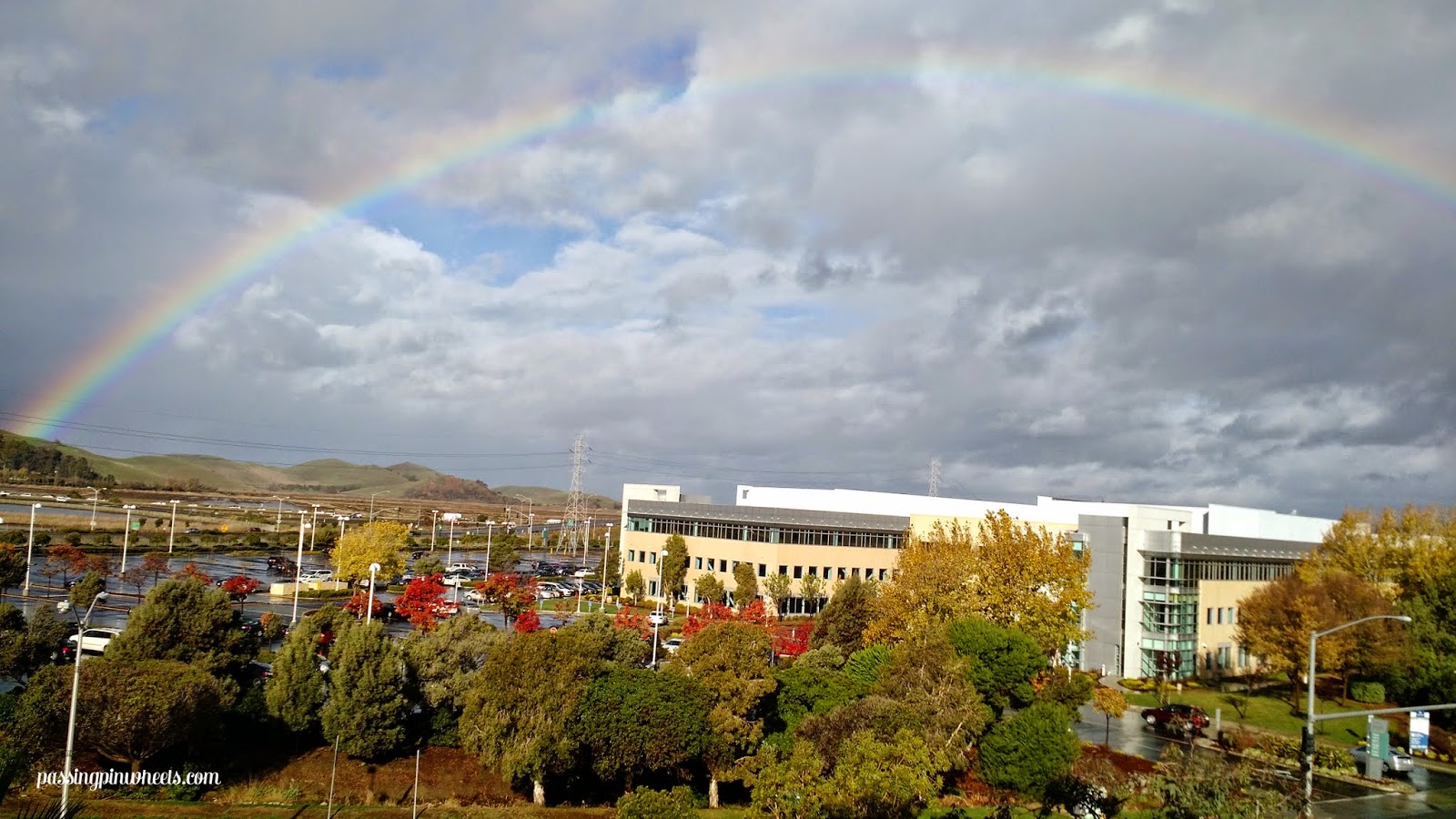 The day of my test, I didn't do any extra training but I was going to go crazy if we didn't do *something* so we went to Chinatown! It's probably a good thing we didn't go with Mike and Autumn because I think they would not have liked the crowds and clutter. It went great, though, because I looked up a parking garage on yelp, went straight there using Google Maps, paid a couple dollars, and bam, we were in Chinatown. No parking drama! We souvenir shopped, people watched and ate at a restaurant we don't know the name of because everything was in Chinese and we ordered by sight or by pictures. We also went to the Golden Gate Fortune Cookie factory in one of the alleys. It was a tiny strip where people sat in a row making the cookies! I bought bags for myself and for Philip and Matt who helped me train in Memphis. 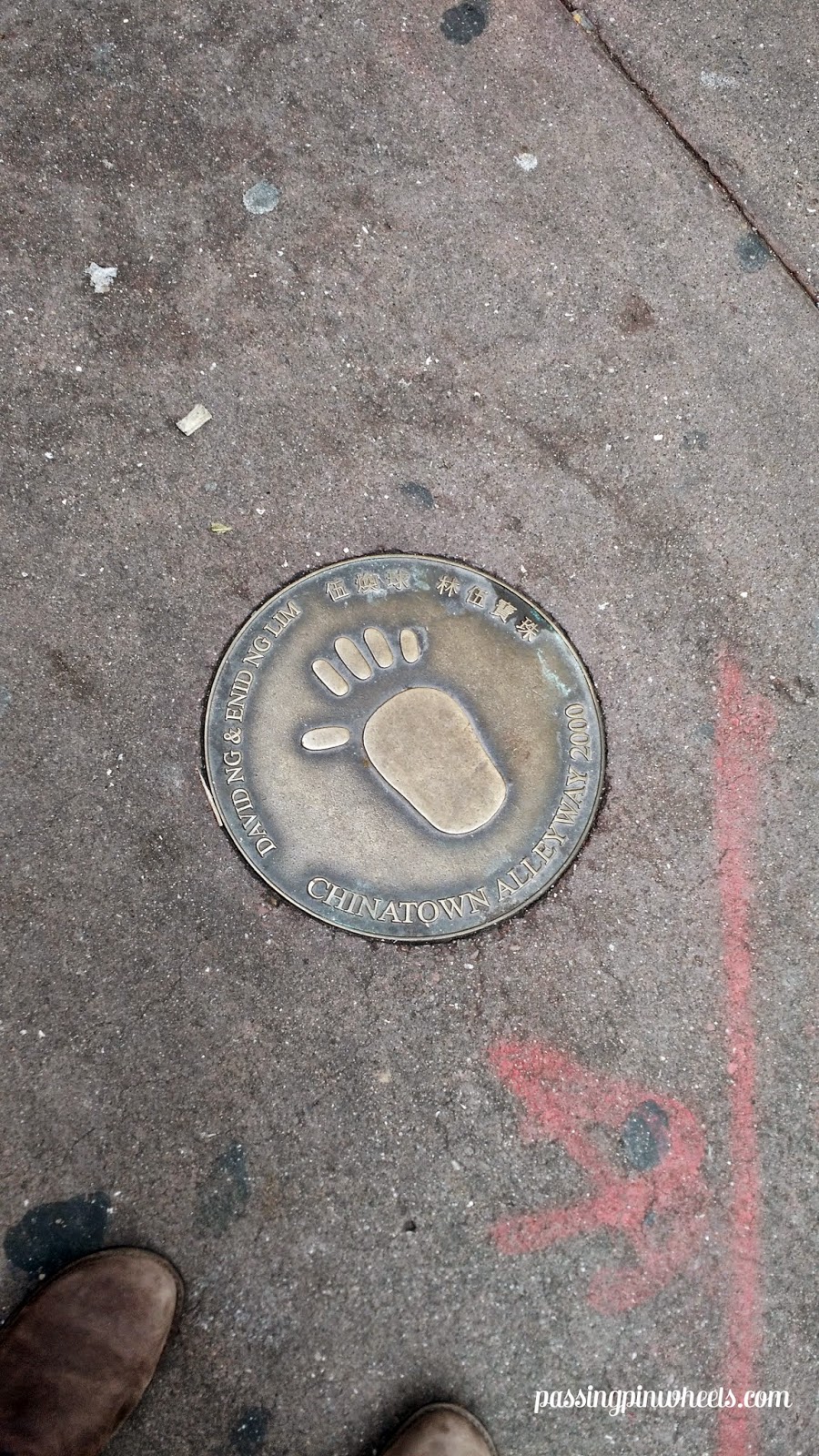 The dojo where I trained was really nice. A good size without being cavernous and their fan cracked me up. It was HUGE and the brand name was Big Ass. I know. So adolescent but still. I giggled. In my fantasies I have a shomen at my school with all the proper items. That's me getting ballroom dipped, by the way. 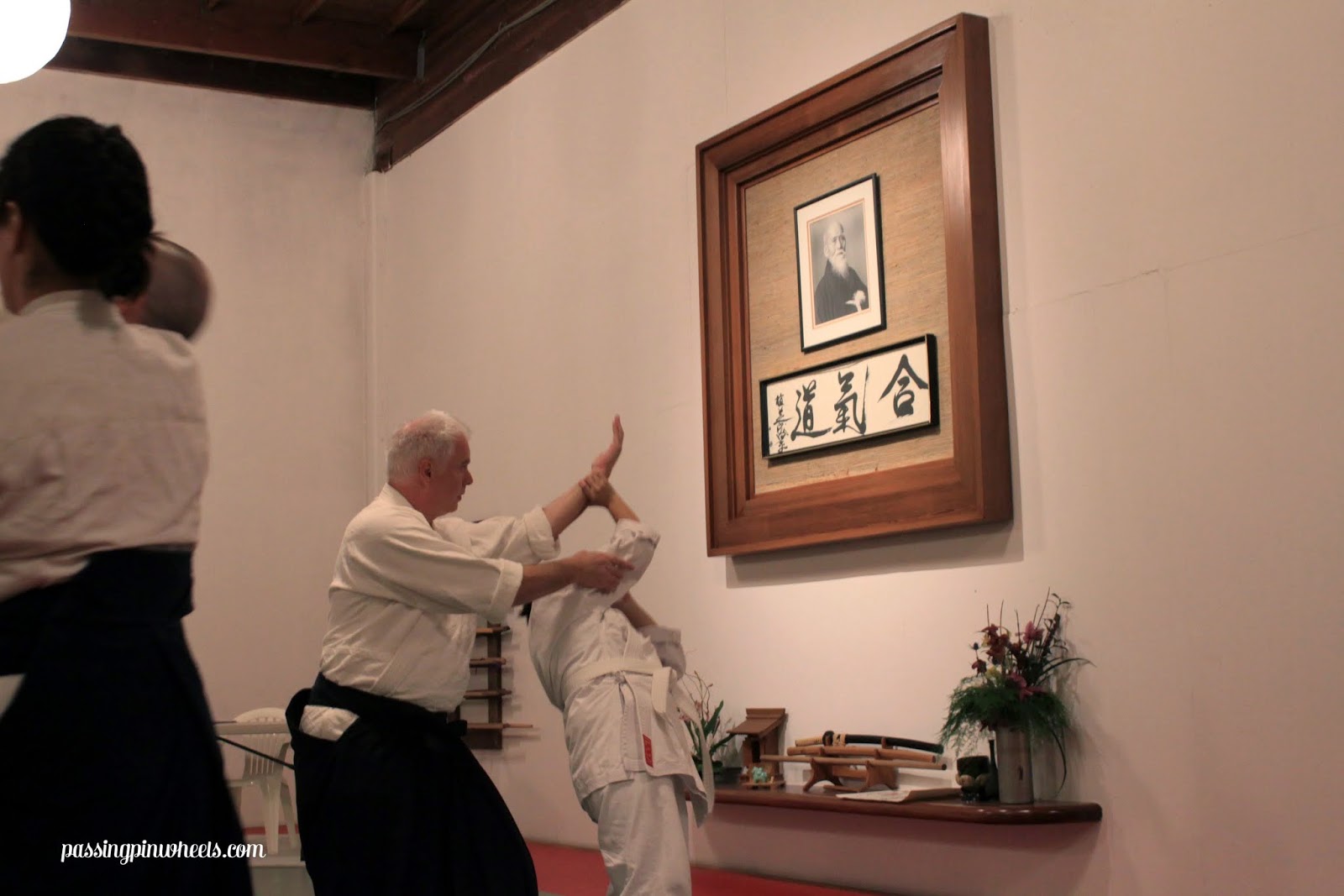 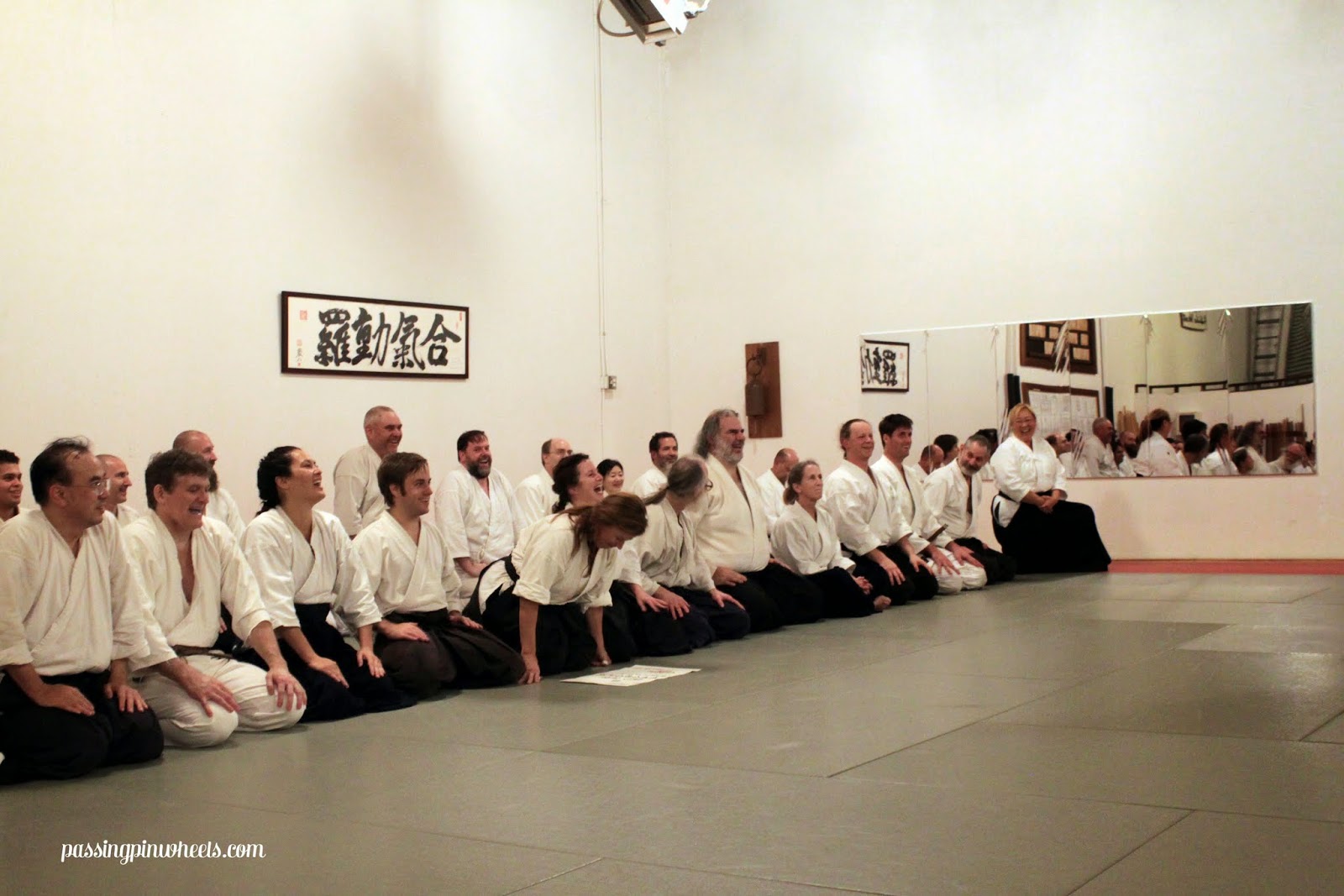 But it was an experience and many of the strangers weren't strangers by the end of it all. I also had a good time watching Stephan reconnect with old friends from his Utah days. I can't remember if I mentioned it before but I am Stephan's first student to test for Shodan! 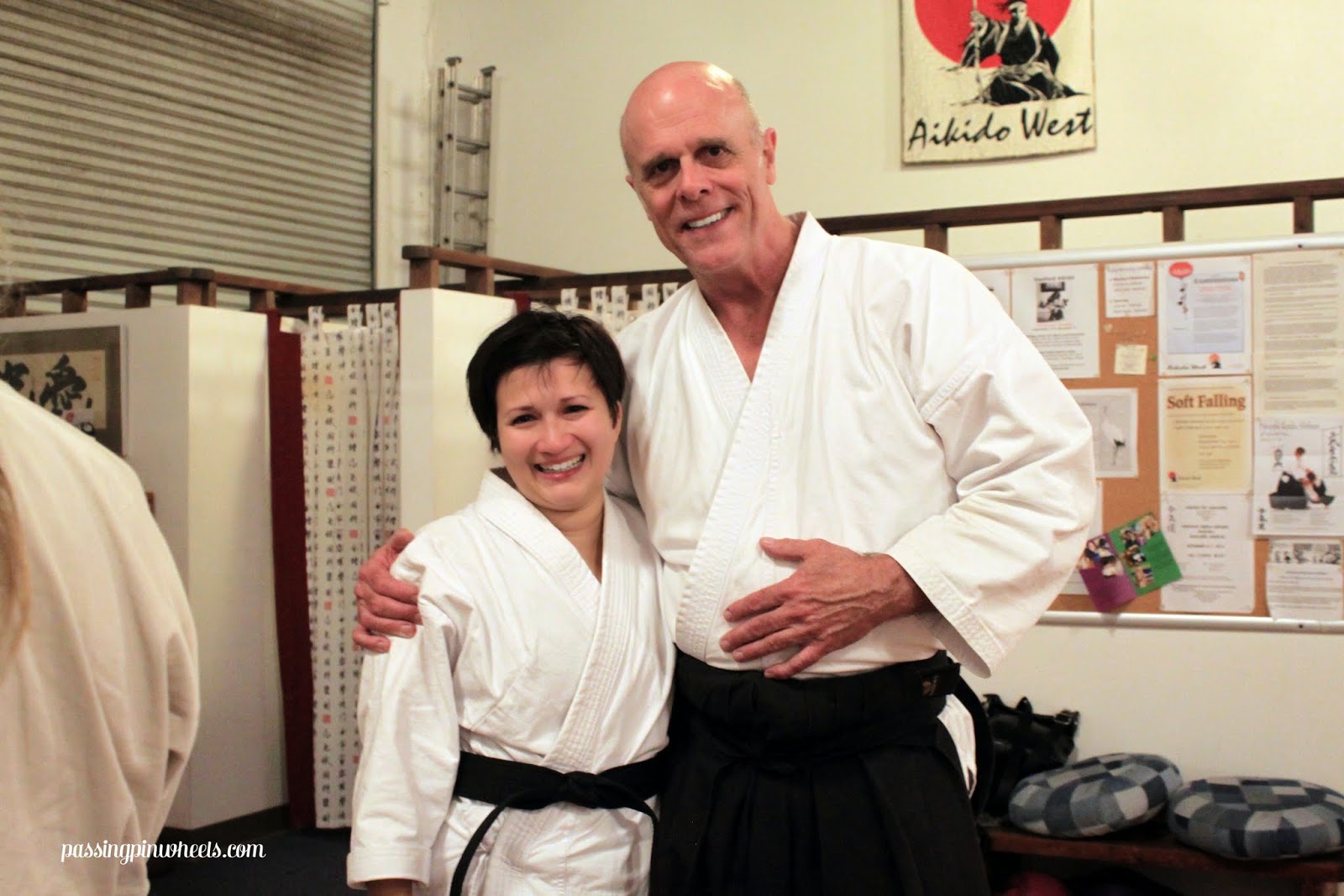 Coming home was so nice although the trip was fun and interesting and challenging. I missed Mike and Autumn and next time I test I want to make sure they are there for it rather than visiting at the beginning of the trip. We talked about having them fly in on Thursday and then we'd go home Monday and do our touring on Saturday and Sunday. I could see that being an option in a couple of years when I do this again. I came home to a nice little welcome home set up. All of Autumn's favorite friends! And...a cute bucket. 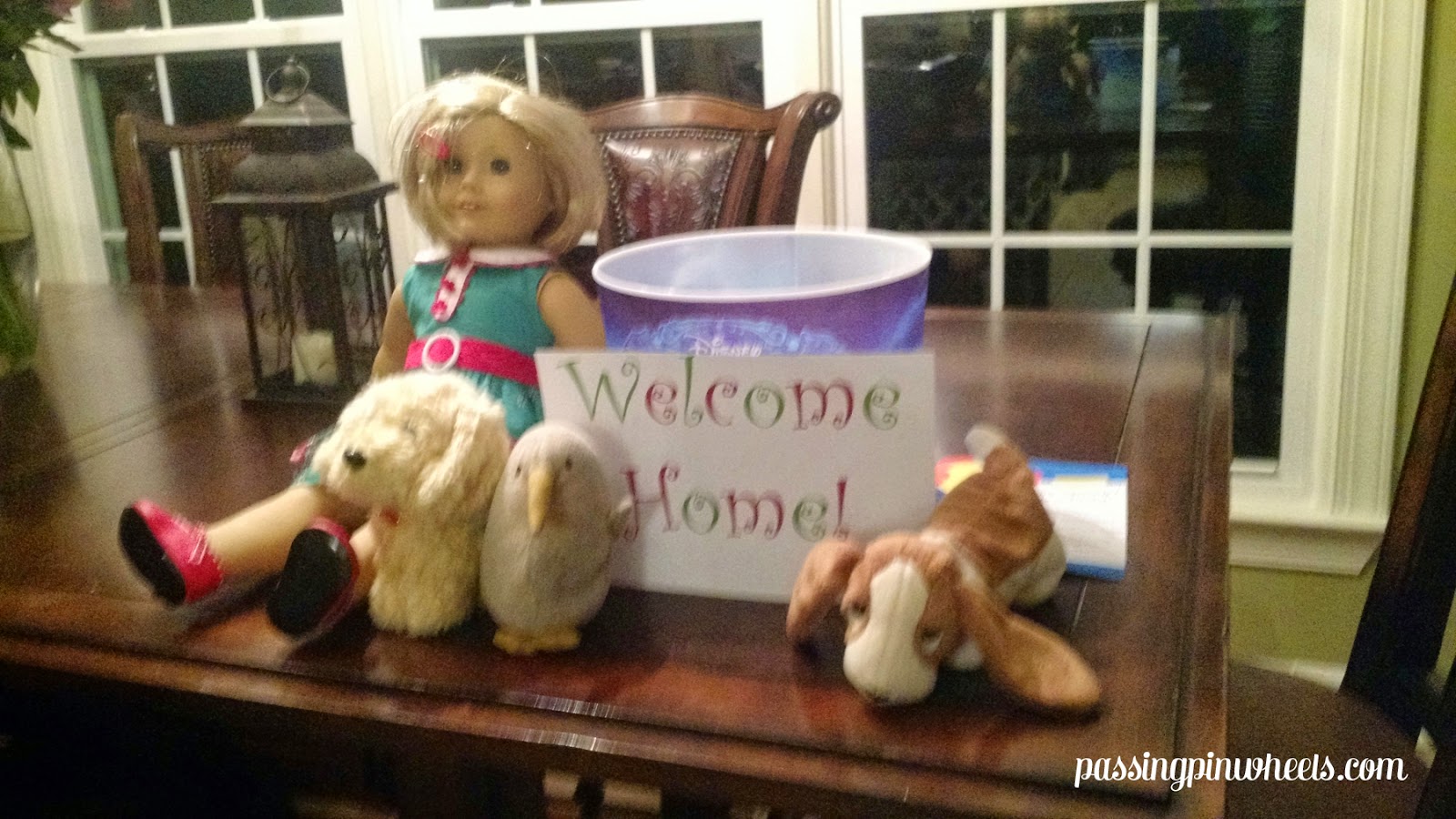 One last thing...I also came home to a new faucet, ha! Mike spent Saturday putting this in all by himself. I'm not sure how we ended up dividing things this way but I do things like hang pictures and put things together and he does plumbing and anything involving the attic. We need to trade plumbing and hanging since he's tall and I fit in small places! I think it's less physical suitability than what we can be patient with, though. Plumbing makes me angry, hahaha. Anyway, we haven't had more than a trickle of hot water for months. I kept telling myself that Laura Ingalls Wilder and her mom didn't get hot running water. Many people now don't have hot running water. But I just couldn't help REALLY WANTING HOT RUNNING WATER. Because if it's an available option, I totally can use it for my greasy pans!! Well, now I have hot water in the kitchen again! Yay and thank you, Mike! 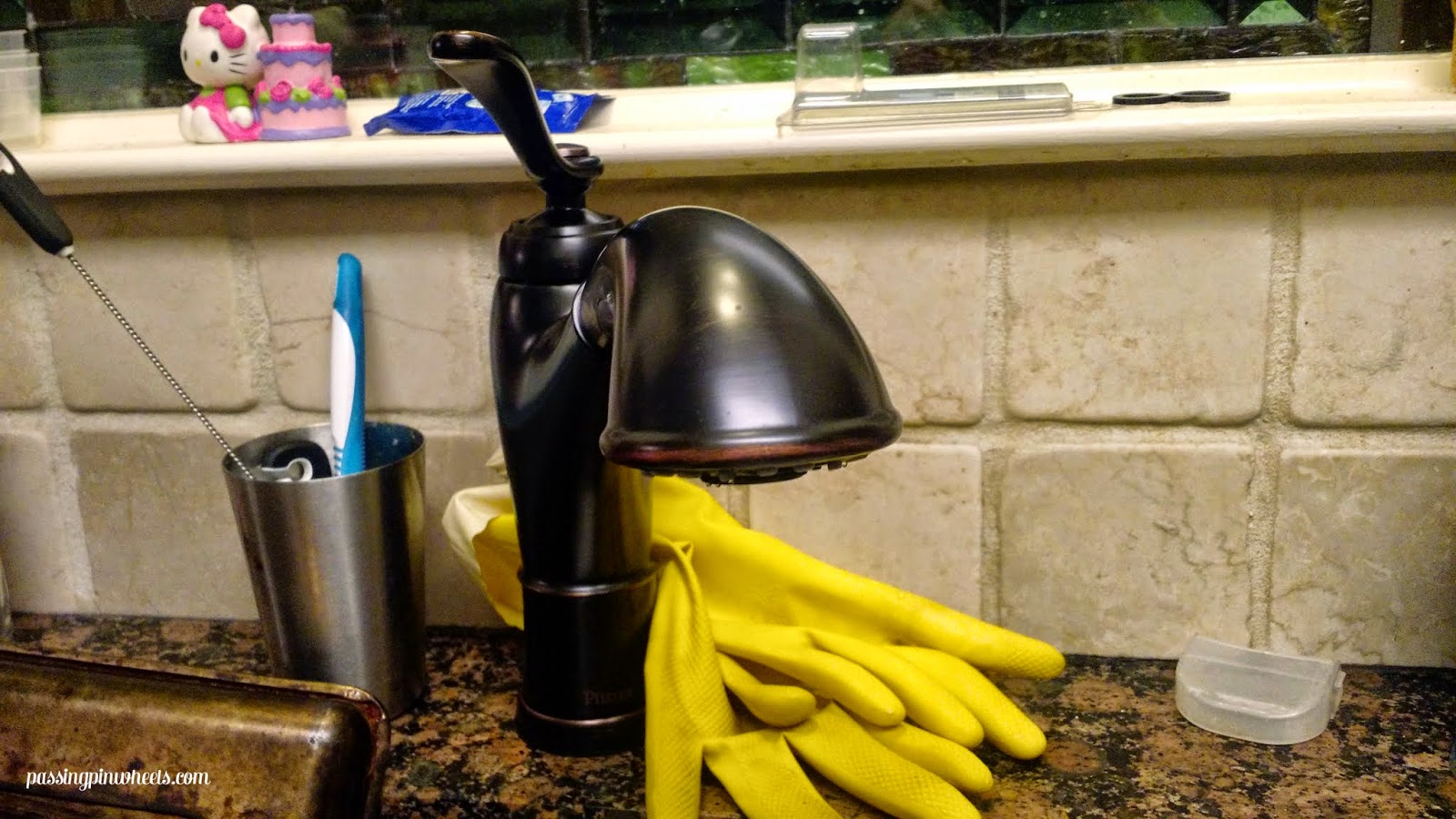 Posted by Sharaze Colley at 5:45 PM